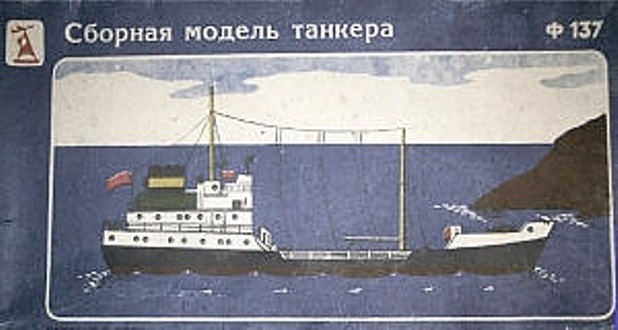 The Donetsk Toys Factory used to be in Russia years ago and went out of business.

The Shell Welder was a tanker, of a class of ships for transportation of liquid loads. It carried relatively small amounts of oil usually. The “Shell Welder” is a typical representative of this class. It was built in 1956 and belonged to the famous company owners Shell-Mex, B.P. Marketing company.

I got this kit from a pen pal in St. Petersburg, Russia, years ago. There are three brands that are doing the Shell Welder kits. It is my understanding that these are the same mold – which in turn was originally a Frog brand mold (this British company now long out of existence). The three companies that were releasing it were Eastern Express, Modelcraft of Canada, and Novo. Today it is only available from Ark brand in Moscow, Russia. The only thing any of these brands did to the kit was change the box art, added decals and included English in the kit.

The kit comes in a very flimsy tray and lid type box, made of very poor quality cardboard. It was held shut with tape and not shrink-wrapped. My kit came badly crushed from Russia, with a lot of parts broken off the trees already.

The kit contains a large blousy cello bag with all the grey parts in it. It would be hard for me to say how many trees of parts are in the kit, as so many parts broke off the trees in shipment. However, I will give it a go.

There are two full hull halves. These are nicely molded with portholes open in them.

Next is a tree of funnels, davits, pipes etc. It is molded very heavy-handed, with lots of flash and mold ejector marks galore on things.(78 parts left on this tree, that HAVEN’T broken off already).

The next tree holds two deck sections, ladders, winch etc. This tree has very heavy flash on it around those deck sections and the sprue tree is some of the thickest I have ever witnessed in a kit. (26 parts here, that are still on the tree).

Another tree with huge sprue arms holds only 3 parts that haven’t broken off it. This is a foredeck part, a part of the cradle for the model and a cabin roof part. 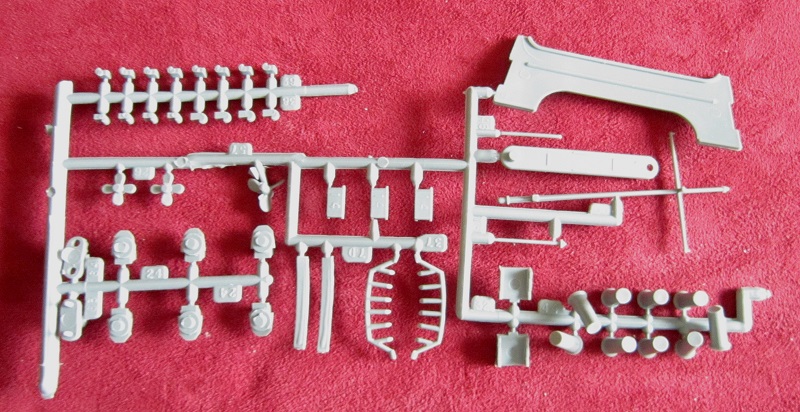 All of the above parts are molded in medium grey plastic.

The final tree in the kit is a tree of the ship’s railings, molded in black. These appear to be molded in a rigid vinyl. There is also two runs of what are supposed to be the anchor chains on this tree. However, these are terrible. They look like two strings of beads rather than chain and would be better being replaced by some metal chain available in the railroad modeling section of hobby shops. The railings are molded rather on the heavy side too and would look better in PE. I have a set of PE railings that I bought by Fotocut brand that will grace my kit anyways. 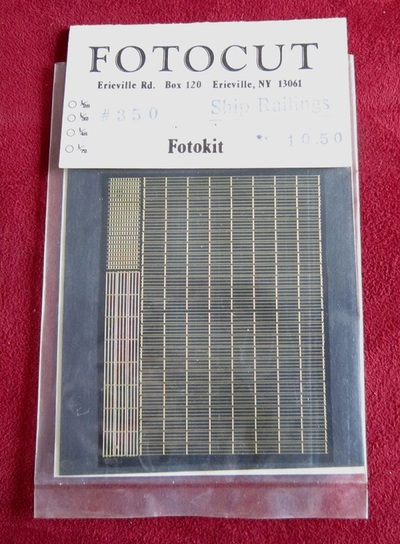 There are no decals in the kit. This is a shame, because I saw the decal sheet that comes in the Eastern Express brand kit of the Shell Welder and it is quite extensive, to say the least.

The last item in the kit is the instruction sheet. It is all in Russian. This consists of a large single sheet, printed on very poor quality brown paper. It is accordion folded with three folds, making up four widths. On one side, in one of these widths, is some Russian text. On the whole other side is printed eight assembly steps. No color help is offered to decorate this model, other than the box art, which I’m sure is lacking all the colors the ship should be. The international symbol for gluing or non-gluing is shown a few times. In the first step, it looks like you will have to assemble the propeller by gluing on the four blades to the spinnert. Final parts placement is not all that clear in these exploded assembly drawings. You are not always sure where a part is supposed to wind up…sigh. There is not any parts tree drawings and you will have to identify the parts on the trees by their numbers on the sprues. However, with the multitude of parts that broke off these trees on my kit…that will be a big chore.

I would not recommend this kit to a beginning ship modeler. There is going to be a lot of cleanup of flash and mold release marks. I also am tempted to contact Eastern Express and see if a person can buy just the decal sheet from their kit. This Russian kit sorely needs some markings. With a lot of work, this kit can be made presentable, but it is not a shake the box and out comes a nice model kit at all.