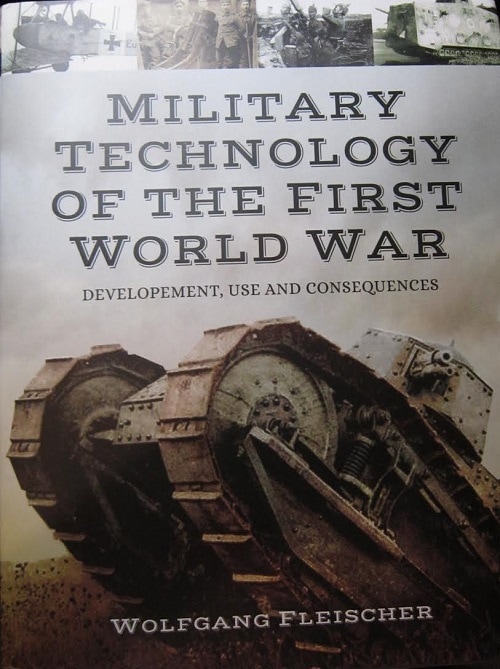 Like any war before or since, the First World War formed the catalyst for a wealth of technical inventions with the only goal in mind to inflict as much damage on the opponent as possible.
No one would have dreamed that as a result of these new technologies, the death tolls on all sides would be so high, nor would the physical destruction of the opposition have seemed possible.

In this new work, Wolfgang Fleischer has meticulously documented all the weaponry that was used by the Central Powers and their opponents, including machine guns, artillery guns, gas, the first armored combat vehicles and aircraft. Only submarines are missing.

Chapters in the book are:

Chapter 1: The Administration of Scarcity

The first large photo shows a field of AP ammunition. There are 2 photos of machine gun crews, a German propoganda poster, a British Mk. IV tank, three photos of artillery pieces, a photo of a R.A.F. F.E aircraft, 2 photos of German signal troops with their radios, 2 photos of No Man's Land and a shot inside a artillery factory and 7 photos inside of munition factories, showing mostly women at work in them.

Shown are 27 photos of different machine guns and some technical manual illustrations of them.

Chapter 4: The Rise of Artillery

Aerial photo of No Man's Land, tech manual illustrations, photos of 31 different artillery pieces (including one mounted on a railroad car), a map and some German documents and some data lists.

A photo of a French Char Schneider, 4 tech illustrations, 24 British Mk IV and V's, a French Renault FT-17, a German A7V, a data list, a map, a German howitzer, German documents.
Next is 4 pages of color illustrations off of posters and postcards from World War I. There are 43 of these illustrations showing all sorts of things from that era.

Chapter 7: From the Catapult to the Mortar

Chapter 10: From the Eye in the Sky to the Fist of the Military Leadership

A large photo of a German C-aircraft, a photo of an aerial reconnaissance camera and a shot taken with one, illustration of a aerial battle, a French Voisin 5, a Fokker D-1, a illustration of a Zepellin, a Albatros D-5, a wrecked British aircraft, photo of German bombs, a Gotha G-5, photo of bomb load beneath a German bomber, a wrecked German bomber (type unknown), 2 photos of a Zepplin-Staaken R. VI, a British Handly-Page 0/100 being bombed up by her ground crew, a Fokker D-7,

There are 241 black and white photos in the book. This is vs the 233 that it says on the description of the book on the Casemate web site.

Ten of these photos are on the paper jacket.

There are 15 maps in the book, 2 propoganda posters, 7 German documents and the 4 pages of 43 color illustrations mentioned already above.