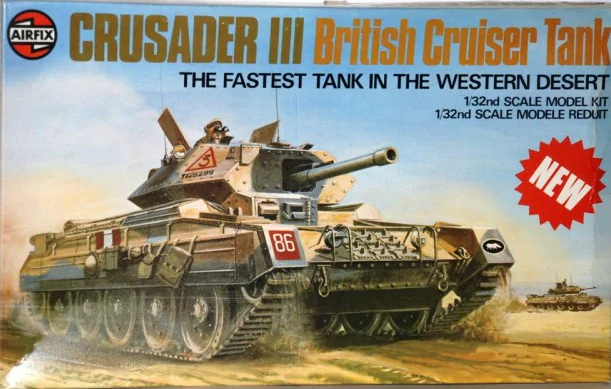 Due to delays with the Cruiser Mark VII Cavalier and the need for cruiser tanks, the Crusader was up-gunned with the 6-pounder, the first British tank to mount this gun.

Design work for a new turret started in March 1941, but Nuffield was not involved until late in the year, when they adapted the existing turret with a new mantlet and hatch.

The turret also received an extractor fan to clear fumes from the firing of the gun. The larger gun restricted turret space, so the crew was reduced to three, with the commander also acting as gun loader, a role previously performed by the wireless operator.

The auxiliary turret space was given over to ammunition stowage.

Crusader III also saw the introduction of the Mk. IV Liberty engine, fixing many of the reliability issues previously encountered.

This featured the Mk. III engine's later updated water pumps along with a shaft drive replacing chain drive for the cooling fans.

Production started in May 1942 and 144 were complete by July. The Crusader III first saw action, with about 100 participating, at the Second Battle of El Alamein in October 1942.
THE KIT:

Airfix was an old prolific model company based in the UK. They went out of business and their molds have appeared several times since under other brand names.

The kit came in a blousey shrink-wrapped tray and lid type box, which is 4 inches too long with a void at one end.

The one in the foreground is is overall olive-green, with a red and white striped tri-color on the side of the hull and a red triangle with a yellow center  on the side of the turret with the number 3 in the center. The 3 can be either red, yellow or blue.

Below the triangle is the black serial no. TI26299.

The other Crusader in the distance is too far away to see any markings other than a red and white tricolor on the side of the hull.
​WHAT'S IN THE BOX:

The instructions consists of a single-sheet that accordion-folds out into 6 pages in 9 1/4" x 9 1/4" page format.

The 1st page of the instructions has the history of the Crusader III in English, French and German, over general instructions and international assembly symbol explanations in the 3 languages.

Page 2 through 5 gives a grand total of 13 assembly steps.

The bottom of page 5 has a marking guide in the 3 languages.

Page 6 is more marking guide and a painting guide, showing a 3-view and a 4-view of the Crusader III.

The 1st one is overall olive-green, with a red and white striped tri-color on the side of the hull and a yellow circle on the side of the turret with the number 3 in the center. The 3 can be either red, yellow or blue. There is a red square with a white 52 on it on the left front and rear fenders and a red square with a white mailed fist on it on the right front and rear fenders. On the back of the turret is another red and white striped tri-color and one that has a blue T123642 on it on the nose of the hull.

It is said that this is one shown in Tunisia.

The 4-view is buff with a black wave pattern over it. It has a red triangle on the sides of the turret with a number 3 in the center, but you can opt to have this number be blue or yellow. Below this triangle is a black serial no. T126299. On the left side of the front and rear fender is a red square with a white no. 86 on it and a red oval with a white rhinoceros on it on the right side front and rear fenders.

It has a red and white tricolor on the sides and rear of the hull.

It is said to be the Western Desert version.

The trees are not alphabetized or illustrated in the instructions. They do, however, have part number tabs next to the parts on the trees.

A lot of parts have broken off the trees. 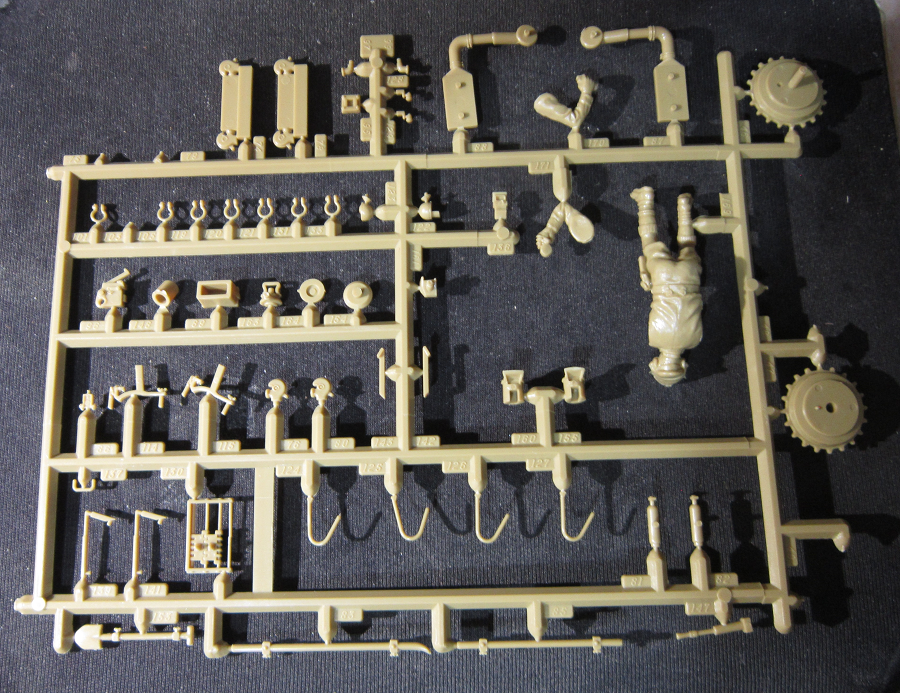 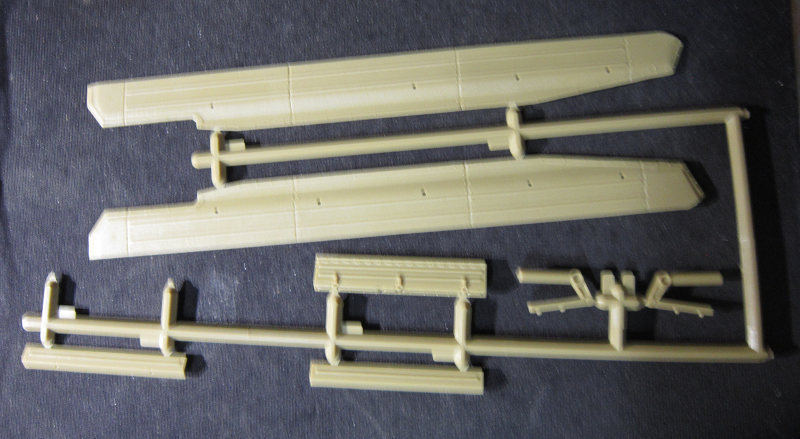 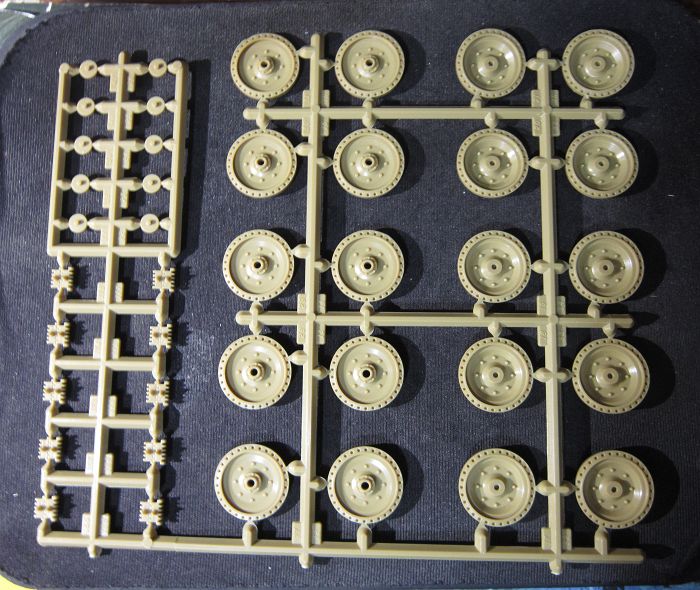 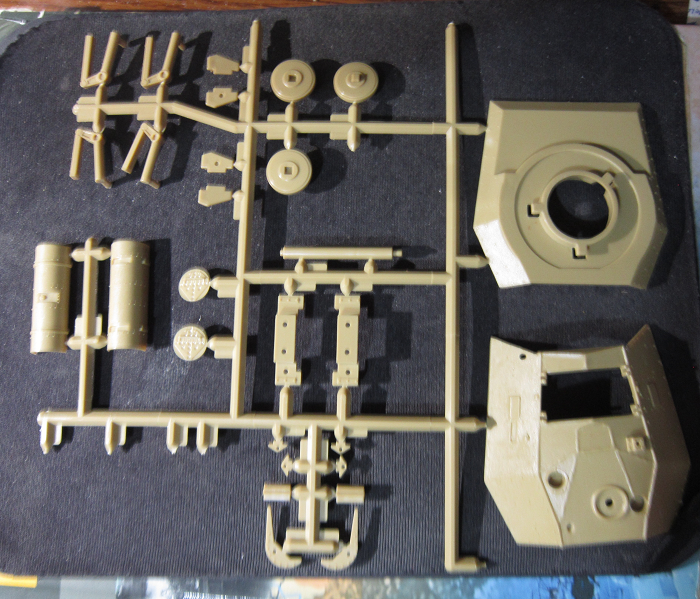 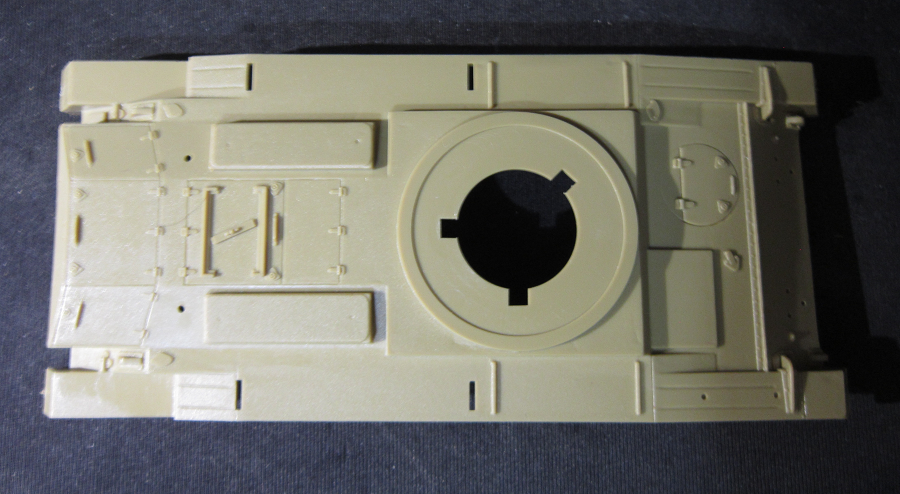 ​There are 4 runs of black vinyl tracks.

​The decal sheets and Airfix Modellers Club application card complete the kit contents. Both sheets have protective frosted sheets on their faces. 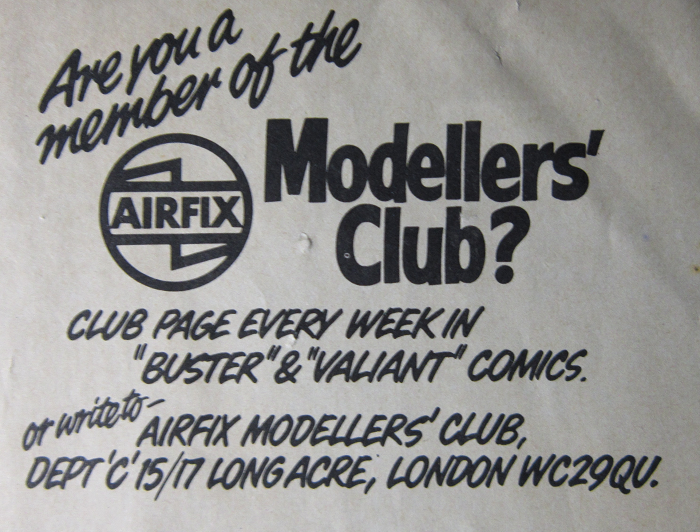 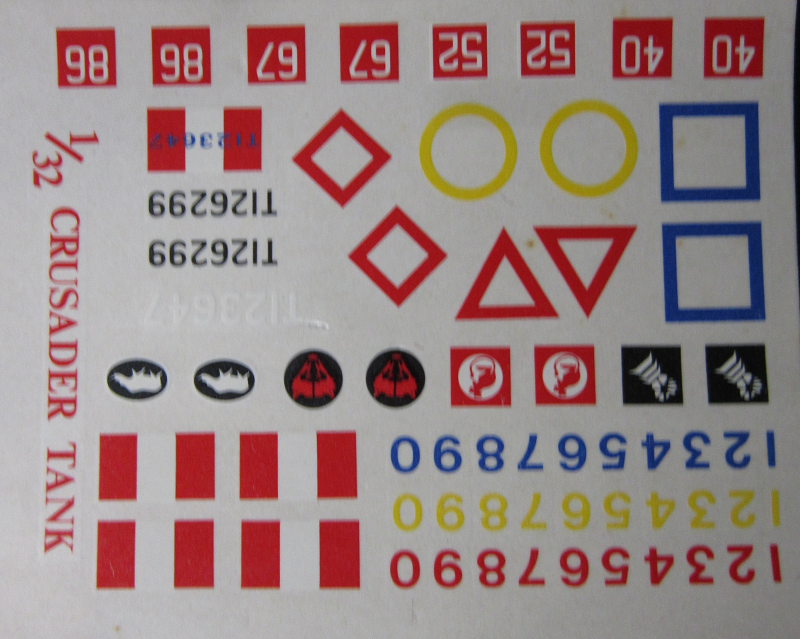 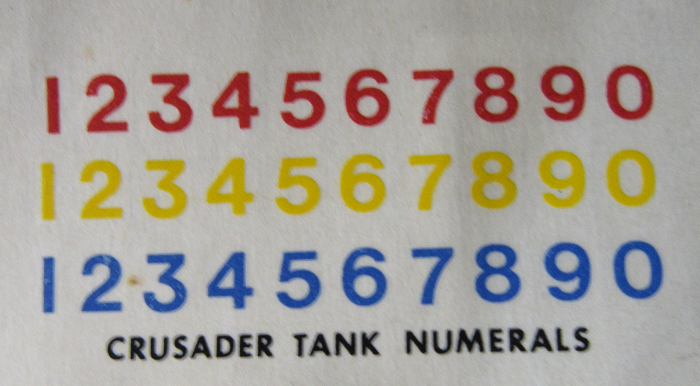