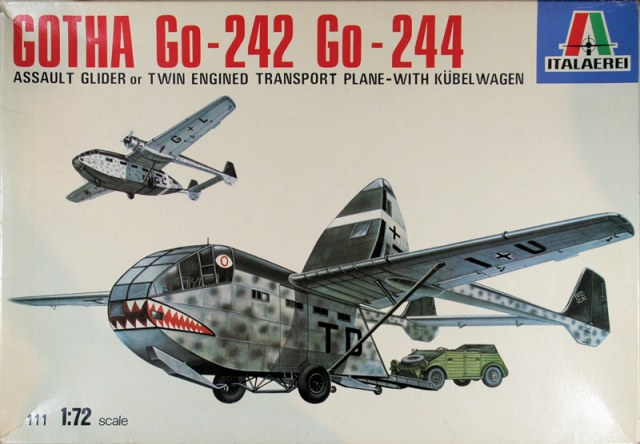 The Gotha Go 242 was a transport glider used by the Luftwaffe during World War II. It was an upgrade over the DFS 230 in both cargo/troop capacity and flight characteristics. Though it saw limited action, it appeared in multiple variants.

The Go 242 was designed by Albert Kalkert in response to a Reichsluftfahrtministerium (RLM) requirement for a heavy transport glider to replace the DFS 230 then in service. The requirement was for a glider capable of carrying 20 fully laden troops or the equivalent cargo.

The aircraft was a high-wing monoplane with a simple square-section fuselage ending in clam shell doors used to load cargo. The empennage was mounted on twin booms linked by a tail-plane.

The fuselage was formed of steel tubing covered with doped fabric.

The flight characteristics of the design were better than those of the DFS 230.

Cargo versions of the glider featured a hinged rear fuselage loading ramp that could accommodate a small vehicle such as a Kübelwagen or loads of similar size and weight.

The Go 242 was tested with various rockets for overloaded take offs. A rack of four 470 N (106 lbf) Rheinmetall-Borsig 109-502 rockets mounted on the rear of the cargo compartment was tested but not used operationally.

A second rocket, called "R-Gerät", also used with the glider, was a liquid-fueled Walter HWK 109-500A (R I-203) Starthilfe; a podded monopropellant (T-Stoff), rocket engine mounted beneath each wing and jettisoned after take-off, parachuting down to be recycled.
THE KIT:

Italaerei (now spelled Italeri) is an old prolific model company based in Italy.


They manufacture all manner of model subjects in the popular scales.

The box art shows a Go-242 glider version sitting on the ground and loading a Kubelwagen car up it's rear ramp.

The Kubelwagen is overall sand.

A Go-244 is flying over. It has the same color scheme and a fuselage code in red of RHGI + (this code not included on the decal sheet).

Both aircraft are posed against an all-white background, similar to how Tamiya does the majority of their box arts too.

​The other side panel has a one-paragraph history of the Go-242 and 244 in Italian and English, followed by a small color repeat of the box art illustration of just the Go-242 and Kubelwagen

The kit contains 2 medium-gray trees and the clear tree in a sealed clear cello bag, the decal sheet and instructions.

Parts fit the box very tight in all 4 directions,

The instructions consist of a single-sheet that accordion-folds out into 8 pages in 13" x 7 1/2" page format.

Page 1 begins with a black and white illustrations of the 2 versions. Both are very black and inky and markings cannot be made out. Below this is the history of the aircraft's in Italian and English again.

Page 3 & 4 have 5 assembly steps. The bottom of page 4 has the history again of the aircraft's, this time in French and German.

Page 5 has schemes for the Kubelwagen as 2 4-views and an exploded drawing to use for assembly of it and a illustration of the the parts tree for it. It holds: sides, floor, wheels, hood, steering wheel, axles, shovel, seats, headlights etc. (19 parts).

A top view shows a splinter pattern on the wings and elevators of medium-gray and dark-gray.

A Go-242B-1 glider version in the same scheme, but with a yellow fuselage band and fuselage code of red 9 white 1 +. It has a red shield on the nose with a white Go-242 that has a skull for it's nose on it.

A Go-244B-1 twin-engined version is also in the same scheme as the 2 Go-242's. It has a yellow fuselage band and red fuselage code of 4V + ES, with the E under each wing. It has a blue shield with a white anchor on it on the nose.
Unit names for these schemes is not provided.

Part trees are not alphabetized or illustrated in the instructions and have no part number tabs next to the parts on the trees. Bad move Italaerei ! 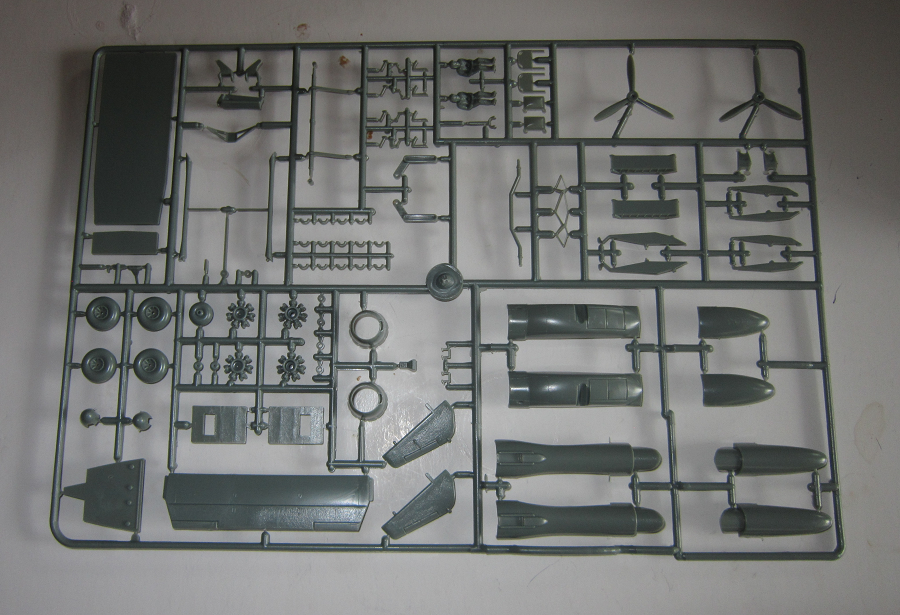 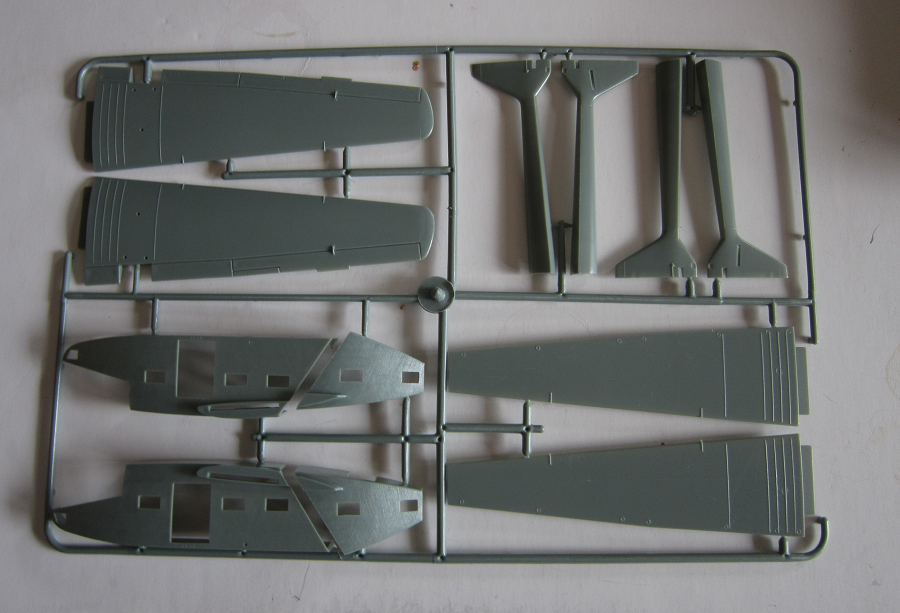 ​The clear tree holds the cabin and fuselage windows (17 parts) 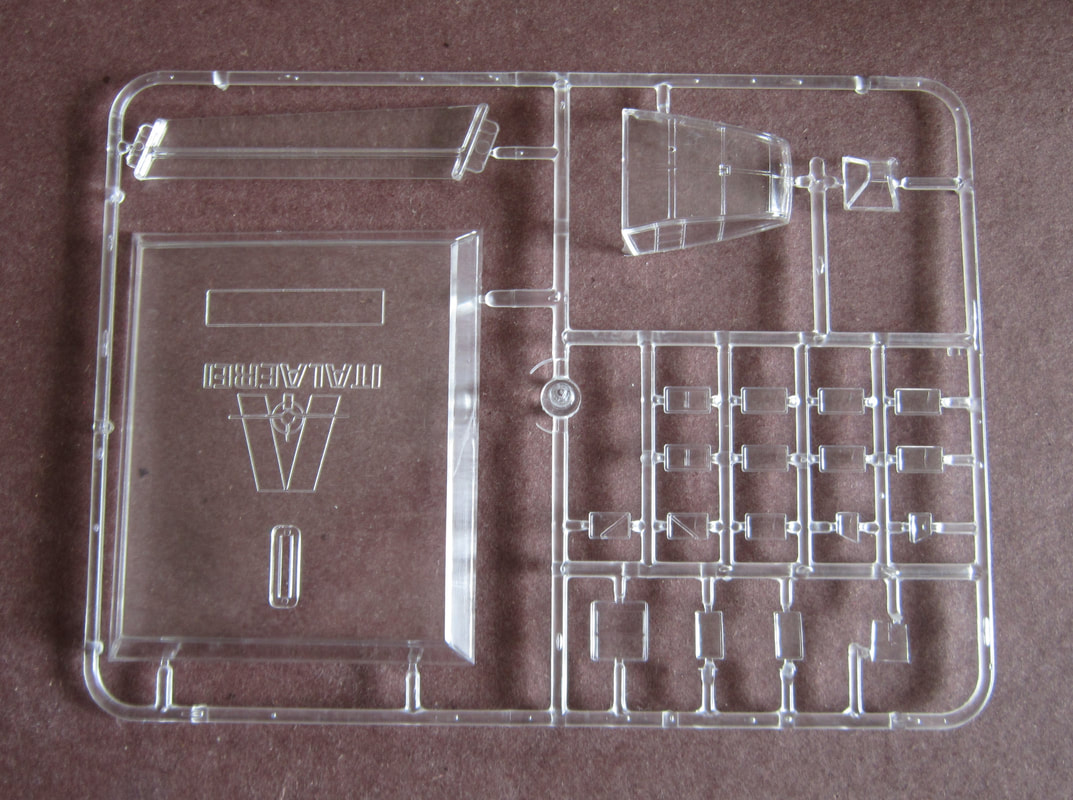 I have already assembled the Kubelwagen. 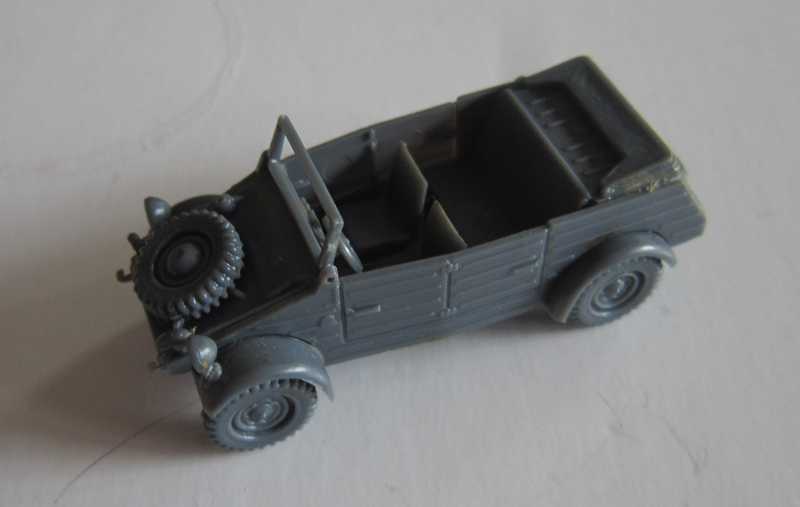 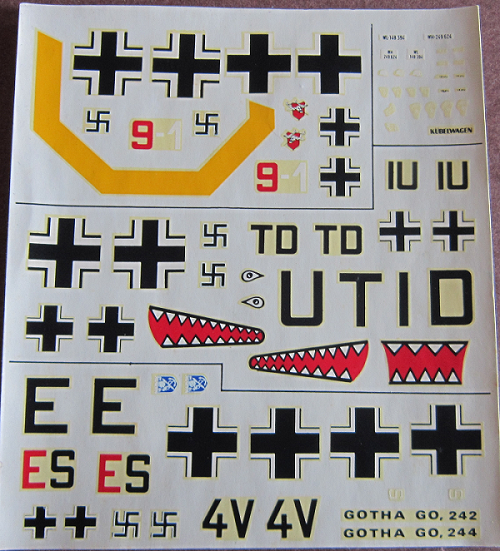