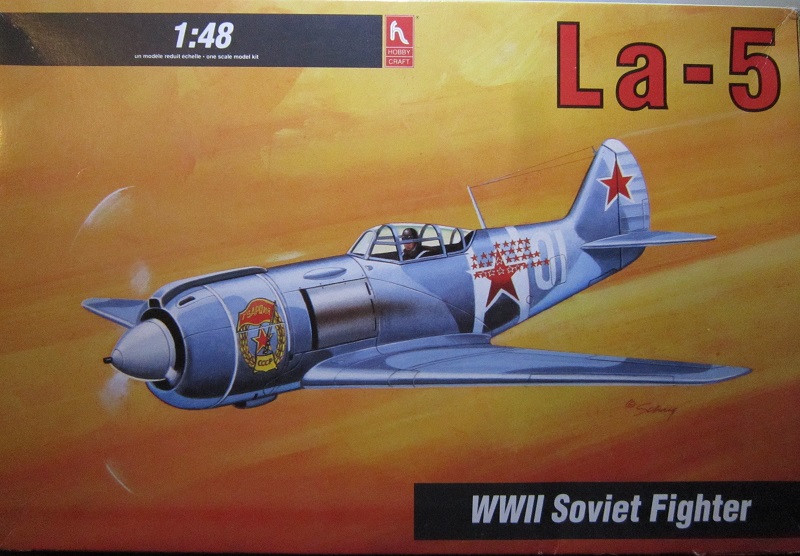 MSRP: $10.98 when I bought mine years ago. Now out of production, but on eBay sites ranging from 8 to 27 bucks depending on where you shop.

Hobbycraft was a model company based in Onario, Canada years ago. Their kits were all made in South Korea. I am sure they are out of business now.

This kit came in a shrink-wrapped tray and lid type box that is a little too big. It has a 2” + void at one end, so could have been in a shorter box.

The box art shows a La-5 flying along in a orange sky. It is in a wave pattern of 2 shades of grey above a light blue undercarriage. It has a white propeller spinner and 2 white fuselage bands.l There is a soviet red star on top of the white bands outlined in white and another one on the rudder sides. Over top of the fuselage star and the bands are 31 small red stars that are victory marks (or sometimes called kill marks). A large Order of the Red Flag logo is on the sides of the nose. A white 01 is on the fuselage sides beside the bands.

One side panel has a list of the features of the kit: detailed cockpit and landing gear, engraved panel lines and authentic markings – in English, French and German. Below that is Hobbycraft’s street address in Ontario, Canada and their overseas agent International Hobbies’ street address in the UK is also given.

A coupon to cut off the box and add to other coupons on Hobbycraft model boxes is to be used to send for a free kit. However, I cannot remember how many were needed for this and at any rate I never did collect enough to take advantage of the offer.

This kit contained 3 light-grey trees and a clear tree of parts in a sealed cello bag, the decal sheet and instructions. There was a card included to use to order Hobbycraft’s color catalog for 3 bucks and a pre-paid post card to send them suggesting other subjects for models for future production. 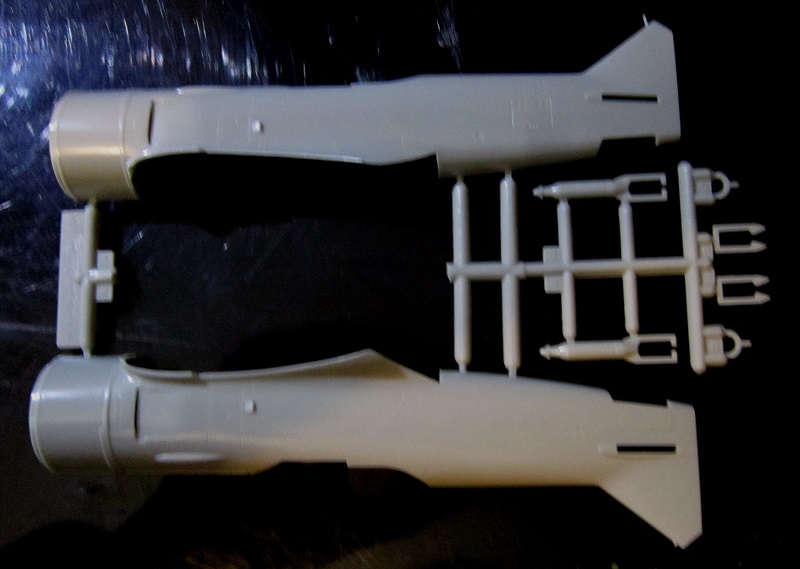 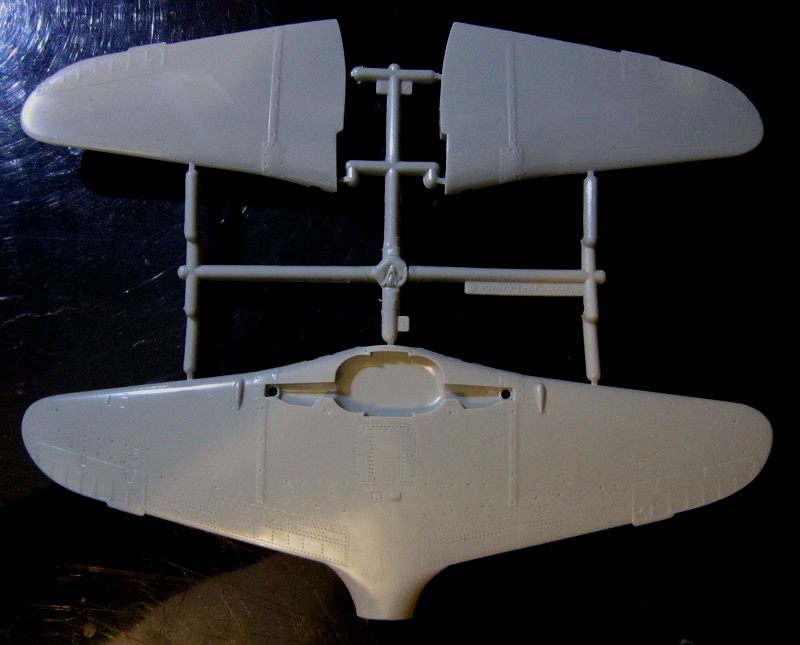 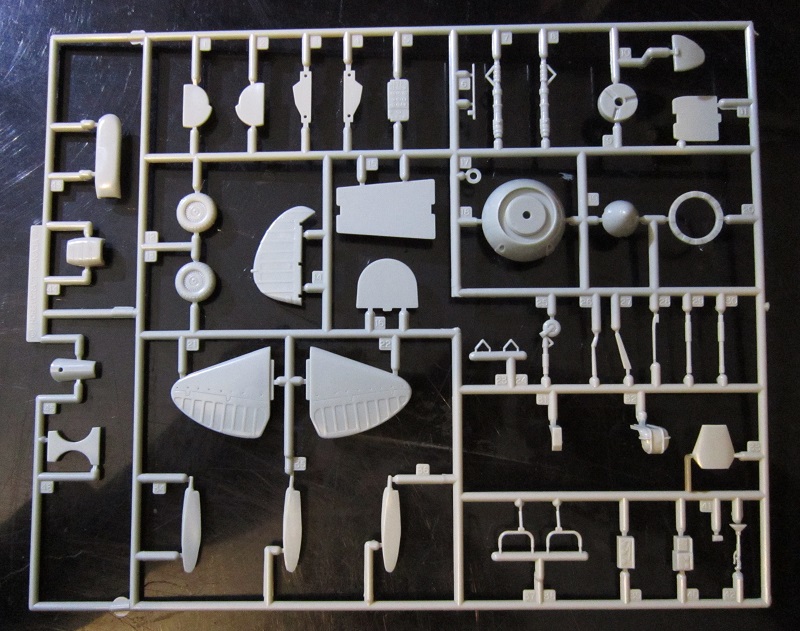 The single clear cockpit part is next. It would take surgery to pose it open however. 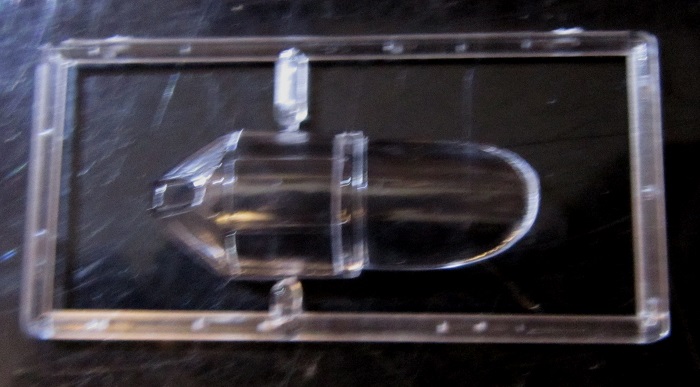 The decal sheet, instructions and the cards and slip complete the kit’s contents. 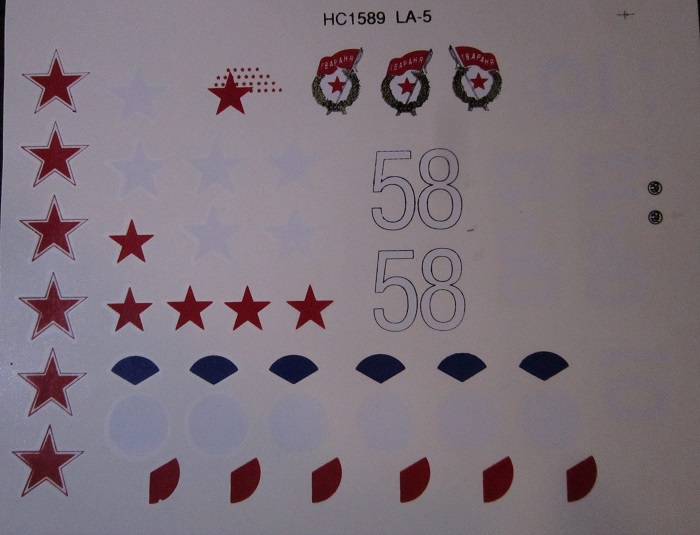 The instructions consist of a single sheet that accordion folds out into 6 pages in 8 ½” x 11” page format.

Page 1 begins with a black and white repeat of the box art, followed by the history of the La-5 in 5 languages – including English.

The bottom of the page has international assembly symbol explanations and Hobbycraft’s street address in Ontario, Canada again and MADE IN SOUTH KOREA – in English and French.

Page 2 to 4 give a grand total of 6 assembly steps.

Holes have to be drilled in the lower wings if you are going to opt to mount the bombs.

Page 5 has three 2-views for camouflage and marking schemes.

2   One is a Czech La-5 that is overall green above a light-blue undercarriage. It has the Czeck red, white and blue pie sliced circle on the rudder and wings tops and bottoms. It has a white fuselage code of OP-13. On the decal sheet you have to build the Czech roundels with separate red, white and blue parts. This shows the aircraft in Czechoslovakia in 1946. No unit is given.

T     The other is a Soviet La-5 in the 2 greys above the light-blue undercarriage, like the box art subject. It has the Soviet red star on the wing bottoms , fuselage sides and rudder, with a white fuselage number out-lined in black of 58. This is an aircraft that was in Checkoslovakia and the USSR in 1944. Again no unit is given.

Page 6 has illustrations of the top and bottom of the Soviet marked planes and the Czech one. Colors are all called out in federal standard (FS) numbers and we are not told what those colors are. Bad move on Hobbycraft’s part.

I went an extra mile on this kit and bought some after-market items for it. One was a set of Aeromaster brand 1/48th scale decals (Aeromaster based in Miami, FL). It is set no., 49-086 and was 5 bucks. It contains 4 Soviet marking schemes. It includes the same markings that are in the kit for the aircraft marked as 01. 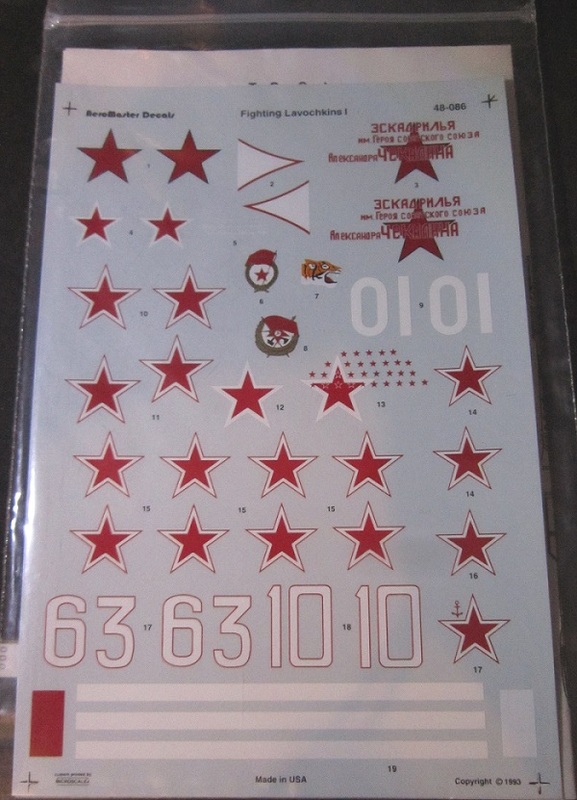 There is a illustration of both sides of this aircraft and the one of the other side that is not shown in the kit shows a tiger head on the side of the nose.

The second aircraft was flown by Francisco Merono, a Spanish volunteer, who flew over 100 missions with the Soviet V.V.S., and was credited with 20 kills. The aircraft’s upper surfaces are green (F.S. 34201), lower surfaces light-blue (F.S. 15200). Natural metal panels aft of the exhausts. It shows red stars on the fuselage sides, wing bottoms and rudder. Over the fuselage star there is a large list of black words in Russian.

We are not told by Aeromaster what this translates into.

The third aircraft is a La-7 and not the La-5. It was flown by Soviet ace Lt. Dolgushin. The upper surfaces are medium-grey (F.S. 36279), lower surfaces light-blue (F.S. 15200). Spinner and cowl are red. Cowl bands and panels aft of exhaust are natural metal. It has a large Order of the Red Flag logo below the cockpit followed by the red star outlined in white and a large white number 63 outlined in black. The red star outlined in white is on the rudder and the wing bottoms.

The fourth aircraft is also a La-7 and not the La-5. It was assigned to Guards Unit, Baltic Front. It has dark-grey (F.S. 36176) and medium-grey (F.S. 36270) camouflage with light-blue (F.S. 15200) under surfaces. The spinner, cowl and rear part of the tail are white. The forward cowl band and panels aft of the exhausts are natural metal. It has a red star outlined in white on the fuselage sides, under the wings and on the rudder. Behind the fuselage star is a white number 10 outlined in black.

This decal comes in a zip-locked cello bag.

The second after-market item I bought for this kit was the Eduard brand brass PE set (no. 48-013) for the La-5. It contains  the dashboard with photo-negatives for the instrument faces, seat belts, levers, trim wheels, air-intake grill etc. Lots of other parts too. 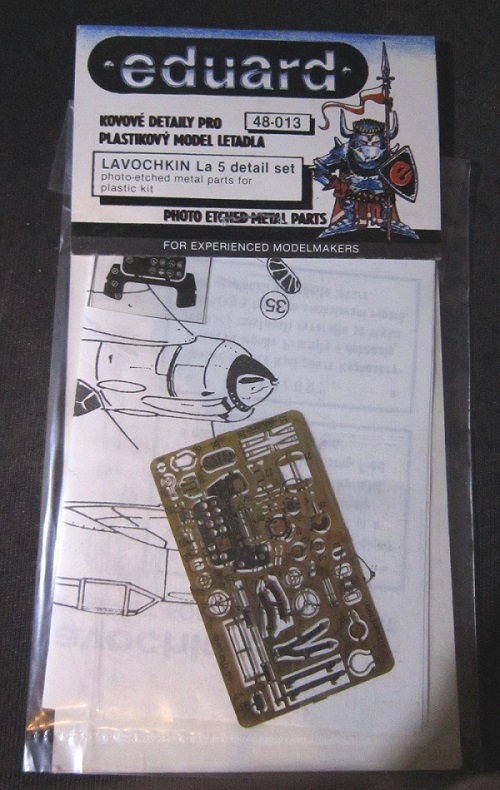 I recommend this kit to modelers of average building skills. It is really a week-end project and a fast build out of the box.

I don’t know who was really right as far as the colors that were on aircraft number 01. If it was Hobbycraft or AeroMaster?

Kit was courtesy of my wallet at my local hobby shop years ago.