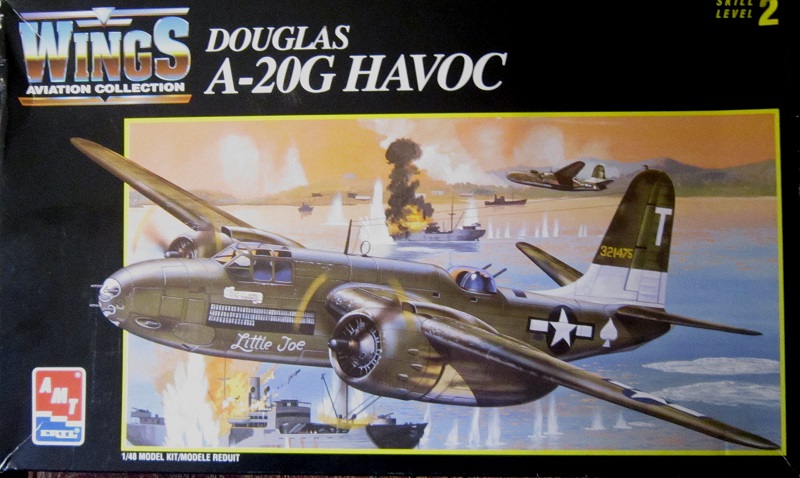 The Douglas A-20 Havoc’s full story has yet to be told. The brainchild of three of aviation’s true immortals – Donald Douglas, Sr., Ed Heinemann and Jack Northrop the A-20 arrived at a time of rapid growth and change in the late 1930’s as the world prepared for war.

The A-20’s predecessor/prototype, the 7B, created an international furor when, during a flight demonstration carrying an unauthorized passenger in the form of a member of the French Purchasing Commission, the aircraft crashed. Still, the French were very impressed by the aircraft and, desperately preparing for war, ordered 100.

The aircraft was substantially redesigned to fix a number of problems, but retained the unique interchangeable noses that enabled it from the start to be built as a bomber or attack plane. Following redesign, the 7B became the DB-7 and it was this aircraft that the U.S. Army Air Corps became interested in, ordering over 200 of the now-designated A-20 and A-20A’s.

The British soon became interested and ordered the aircraft as the Boston. It was combat experience gained by the British that was in many ways to turn the A-20 in its subsequent versions into the fast, heavily-armed attack ship we know.

This AMT kit represents the ultimate gunship version of the A-20, the A-20G. American combat crews in Tunisia and the Pacific, seeking ways to enhance the firepower of their aircraft, field-modified their planes by getting rid of the bombardier position and filling the glass nose with .50 caliber machine guns. It was decided to manufacture a solid “gun-nose” version, thus the G.

The first 250 aircraft (G-1’s), had four 20mm cannons plus two .50 caliber machine guns. This setup was not as effective as hoped and most were sent to Russia. All subsequent aircraft had six .50 caliber nose guns. Beginning with the A-20G-20, the older single-gun, hand-operated, open rear defensive position was replaced by a power-operated twin .50 caliber Martin turret.

Nearly 3000 G’s were produced, making it the most-manufactured version of this aircraft. Production ceased in September 1944, and was replaced by a bigger, heavier, faster, more powerful big bomber, the A-26 Invader.

Ertl was a company based in Dyresville IA that for 60 years produced cast metal farm toys, like tractors and plows etc. In later years they did some plastic kits of aircraft, armor (which were ex-ESCI molds from Italy) and some cars and trucks. The company has since been sold and I don’t know who owns it anymore or what they still make. Before Ertl sold the company they sent the cast metal molding operation to China and the plastic molding to Mexico. Only a warehouse and the discount store  remained in Dyresville.

The box art shows “Little Joe” and a partner A-20G attacking Japanese shipping in a harbor.

One side panel has a color photo of the model made up in the markings for “Little Isadore”. Next to this is specs for the G:

The copyright date of 1994 is shown above Ertl’s address in Dyresville, IA.  And MADE IN USA.  A blue banner has Ertl’s commitment to quality on it with a 1-800 phone number to call them about any problem encountered with the kit.

The other side panel has a list of the kit’s details:

Paint and glue not included

Next to this is 4 color walk-around photos of the kit made up in the markings for “Little Isadore”.

NOT SUITABLE FOR CHILDREN UNDER 8 YEARS appears in multiple languages, including English. Paint and glue are not included and the kit is for modelers over 8 is said.

The assembly instructions are a single sheet that accordion folds out into 6 pages in 7 ¾” x 17 3/8” page format.

Page 1 through page 6 of the assembly instructions have a grand total of 23 assembly steps.

In step number 4 you have to whittle and carve the landing gear doors if you want to opt to have the gear down or up.

In step 14 you are shown the assembly of the gear doors and bomb bay doors in the closed positions.

Step 17 shows assembly of the gear doors and bomb bay doors in the open positions.

In step 18 you opt to use the long range fuel tank or not.

The painting and marking instructions consists of a single sheet folded in the center to create 4 pages in 8 ½” x 11” page format.

The first page begins with a black and white illustration of “Little Joe” coming head on at you after attacking a train. Only the skull and cross bones on the nose of it are shown. No other marks are visible.

Below this is the history of the A-20G.

Page 2 has a 2-view of “Little Joe” and a scrap view of the nose tip art of the skull and cross bones. The aircraft is in overall dark olive green 41 FS-34086 with the edges of the wings and tail planes in a scalloped pattern of dark green FS-34092. The undercarriage is in neutral gray FS-36173. On the side of the nose is a blackboard with a hundred or more white bombing mission marks with LITTLE JOE below it in cursive letters. Above the blackboard is a white banner with the pilot and crew chief’s names on it. There is a white spade behind the fuselage star and bars. The rudder has a broad white band across the bottom of it and a large white letter T on the rudder. The yellow serial number 321475 is on the forward part of the tail. Wing walk markings are shown and a marking for the fire extinguisher compartment. There is a white skull and cross bones on the nose tip.

Page 3 has a 2 view for “Little Isadore”. It is in the same cammo pattern as “Little Joe”. The tail fin tip is in another green FS-34090. Under that is a thin white horizontal stripe and a large white letter H on the rudder. Below them is the yellow serial number 39476. On the sides of the nose appears what seems to be the head of a mouse or a rabbit in white. Underneath the cockpit windows is a figure of man in a white t-shirt who is surrounded with a lot of white bombing mission markings and LITTLE ISADORE. The fire extinguisher door marking is shown.

Page 4 starts with IMPORTANT assembly instructions, followed by BUILDING TIPS and an explanation of what Federal Standard colors are (FS). To the right of these is illustrations of tools recommended to use to build the kit.

There looks like there has been an effort to alphabetize a few of the parts trees in the kit.. However, parts are not called out with alphabet letters in the assembly steps, only the part numbers. The parts do have part numbers next to them. There are NO parts tree illustrations in the instructions, so care will have to be taken to get the right parts for assembly as you go along. 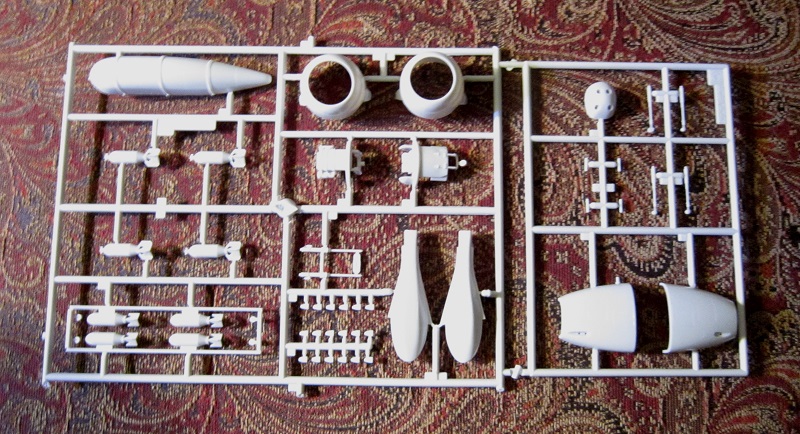 The two white fuselage halves are in the same cello bag as the above. 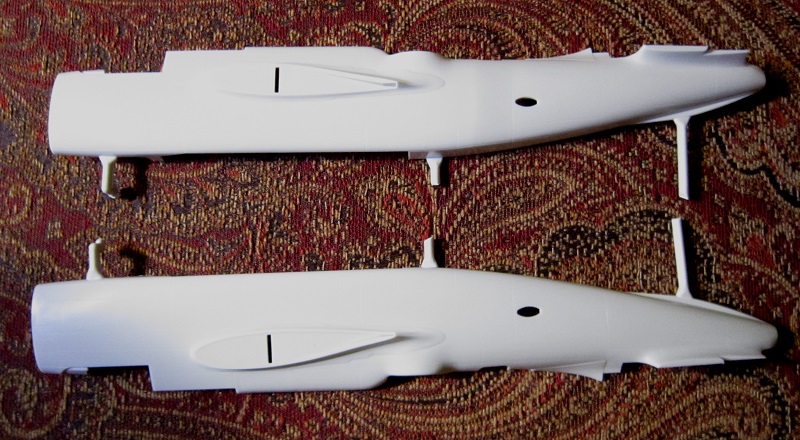 There are 6 white trees in the second sealed cello.

The first one holds the engine compartment halves, the cockpit floor and the bomb bay doors (6 parts). 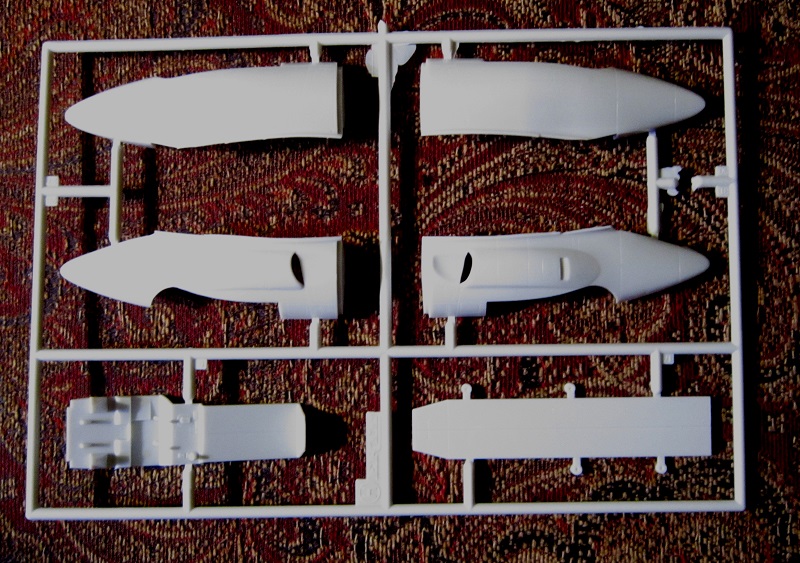 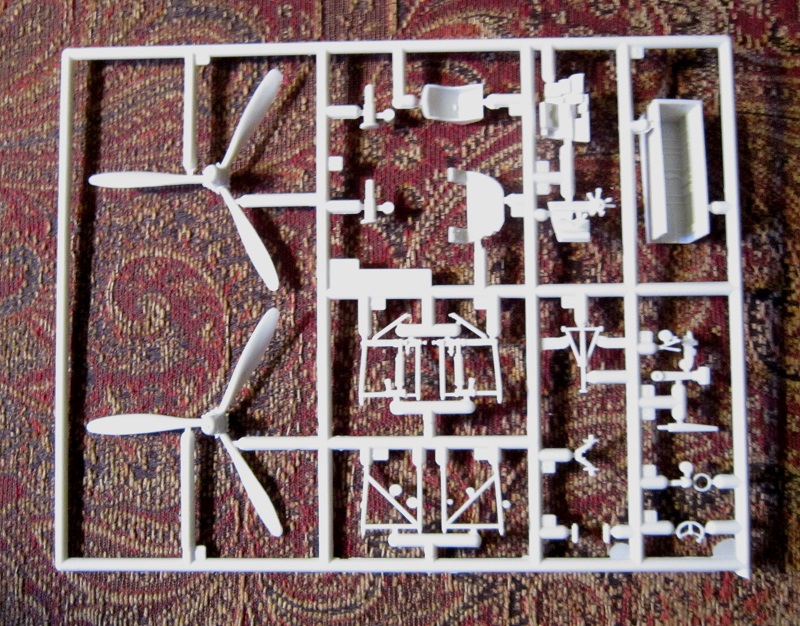 The third one holds the rudder and horizontal elevator halves (6 parts) The flaps on these are molded solid, so surgery would be needed to pose them in other positions. 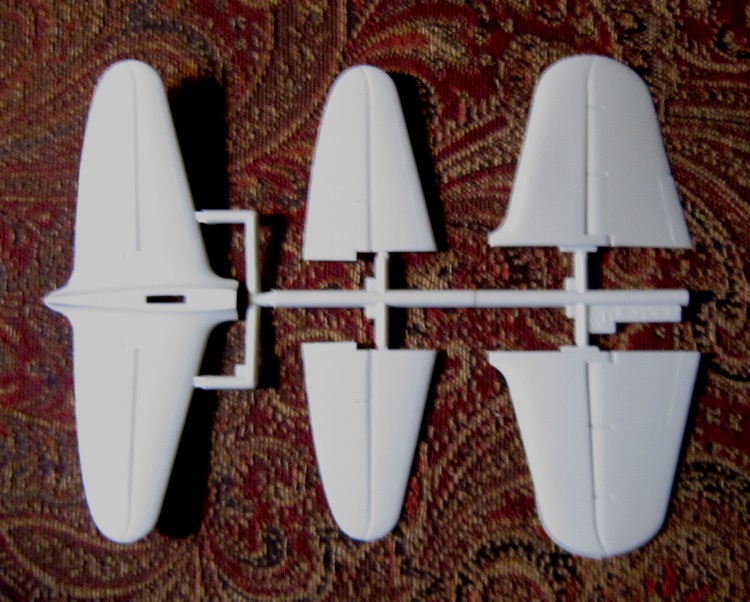 The fourth one holds the bottom halves of the wings (2 parts) Again, the flaps are molded solid. 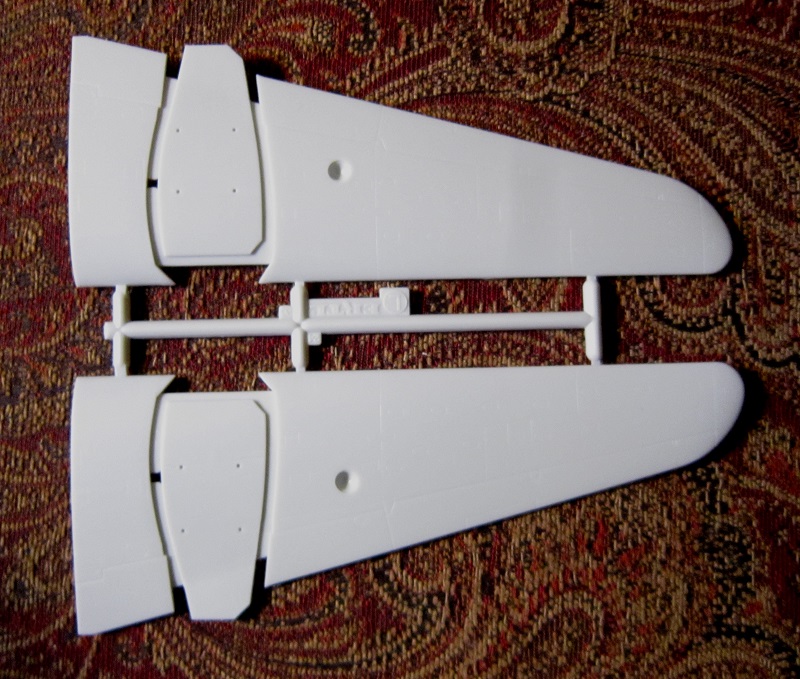 The fifth one holds the top halves of the wings (2 parts) Flaps solid here also. 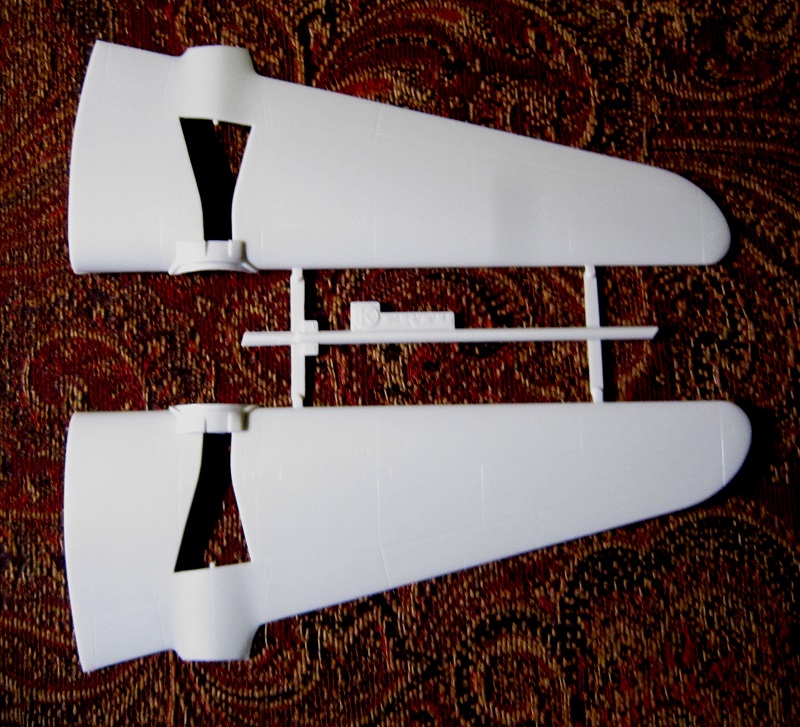 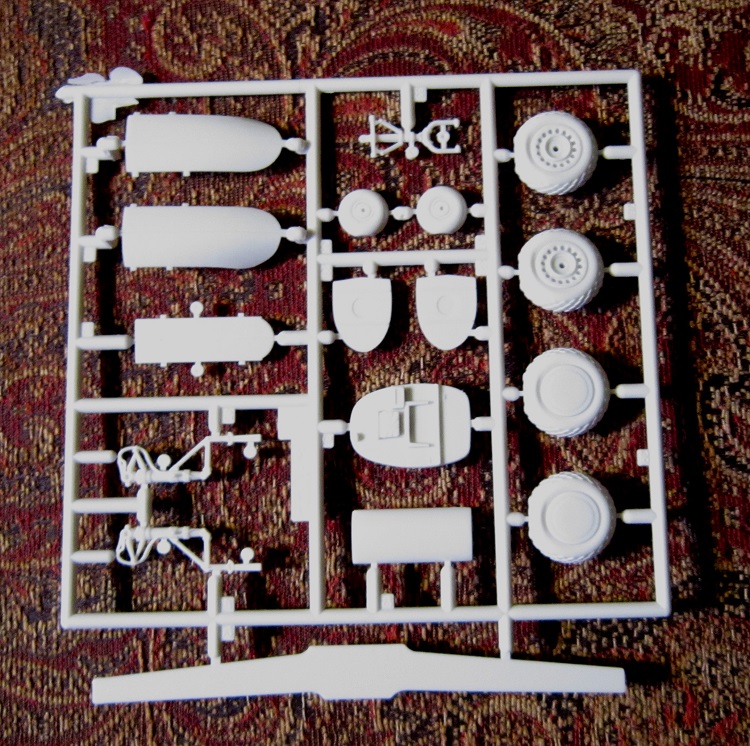 All the parts have light panel lines inscribed. However, they are rather maybe too light and might disappear under a coat of paint.

The clear parts tree is next It holds the cockpit transparacies, the turret window, and wing light lenses (9 parts) 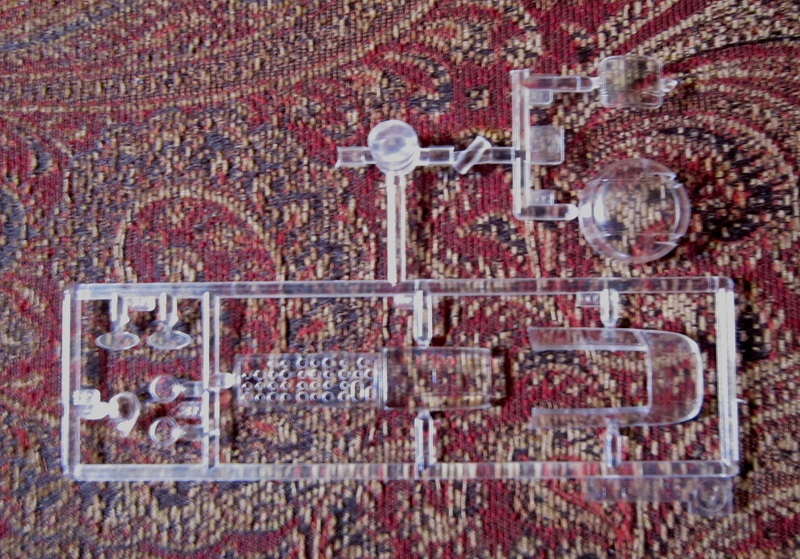 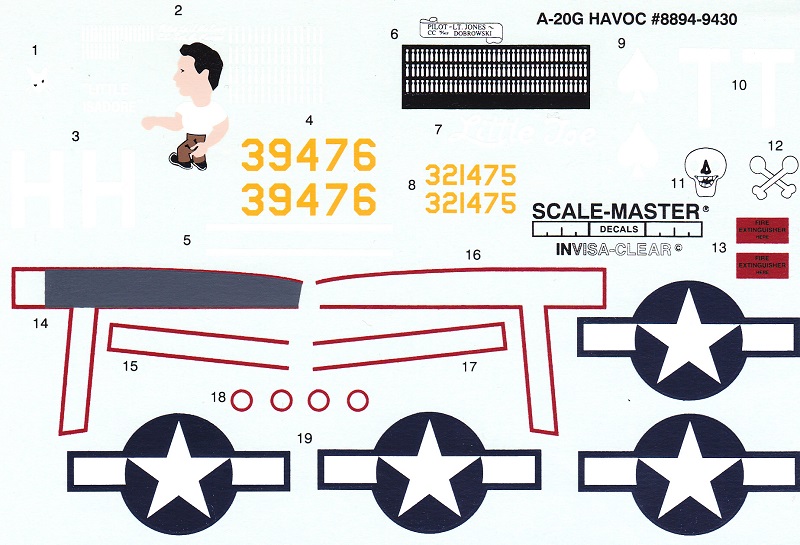 The cello bags in the kit are both printed with warnings about them being a suffocation hazard to children, in multiple languages including English.

I bought a bunch of aftermarket things for this kit: 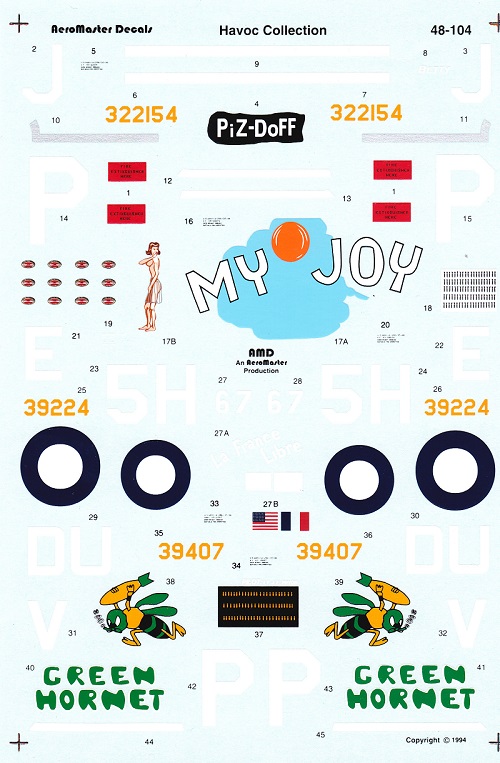 1. "Piz-Doff", serial no. 43-22154 from the 672nd Bomb Sqdn., 417th Bomb Grp.,S.W.Pacific 1944. It is in overall olive-drab over neutral gray undercarriage with medium green mottling on wing and tail plane edges. A black blotch is on the nose with white "Piz-Doff" on it. It has a red diagonal tail tip with a narrow white outline below it and a white letter J on the rudder. The yellow serial no. 322154 is on the forward part of the rudder. The U.S. star with bars insignia's are not included on the sheet and will have to be borrowed from the decal sheet in the Ertl kit.

2. "My Joy" from the 674th Bomb Sqdn.,317th Bomb Group (no serial number given) at Noemfoor, summer 1944. It is in dark olive-drab over sea gray 603 undercarriage. The nose art on the right side under the cockpit is of a bare chested girl wearing only a skirt. She is against a sky blue background with an orange circle behind her head and white MY JOY outlined in black with each word either side of her. The tail has a white diagonal tip on it with a white letter P on the rudder.

3. "Green Hornet", serial no. 43-9047 from the 875th Bomb Sqdn,. 417th Bomb Grp. S.W.Pacific 1944. It is in olive-drab over neutral gray undercarriage with medium green mottling on the wing and tail plane edges. The nose art is a yellow and black hornet with green wings that is blowing white smoke rings and holding a bomb over his head. Behind him is a blackboard with many white bombing mission marks and the words GREEN HORNET in green letters outlined in white below the blackboard. The tail has a diagonal blue tip outlined below with a narrow white stripe and a white letter P is on the rudder.

4. "La France Libre", serial no. 43-9224 from the 66th Bomb Sqdn.,416th Bomb Grp. at Paris 1944. It is in dark olive drab over sea gray 603 undercarriage. It has black and white D-Day Invasion stripes under the wings and around the fuselage code letters (these stripes are not provided on the sheet and will have to be painted on). The white fuselage code is 54 (star) E. Le France Libre is in white cursive lettering at an angle on the left side of the nose above a flag of France and the U.S. This is followed by a white square with many black bombing mission scores. The yellow serial no. 39224 is on the forward part of the tail.

5. White fuselage code DV (roundel) V is from the Royal Australian Air Force No. 22 Sqdn., at Kamiri 1944. It is in medium green over gray undercarriage. A 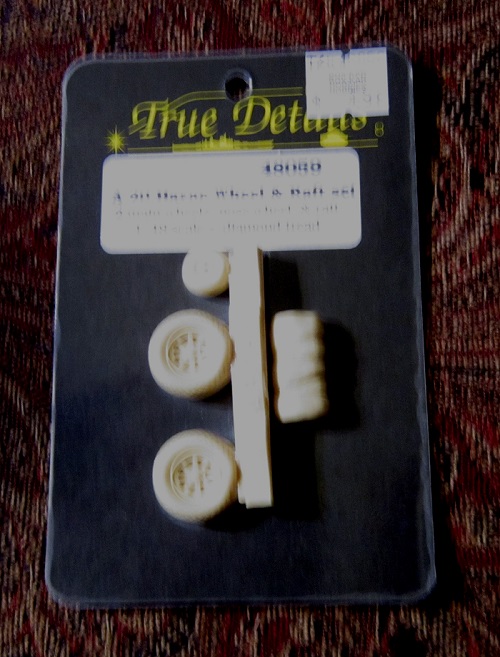 I purchased my kit back in the 90’s at the Ertl factory discount store in Dyresville, IA. I recommend it to modelers of average skills. It has a skill level of 2, which means fairly easy to build.