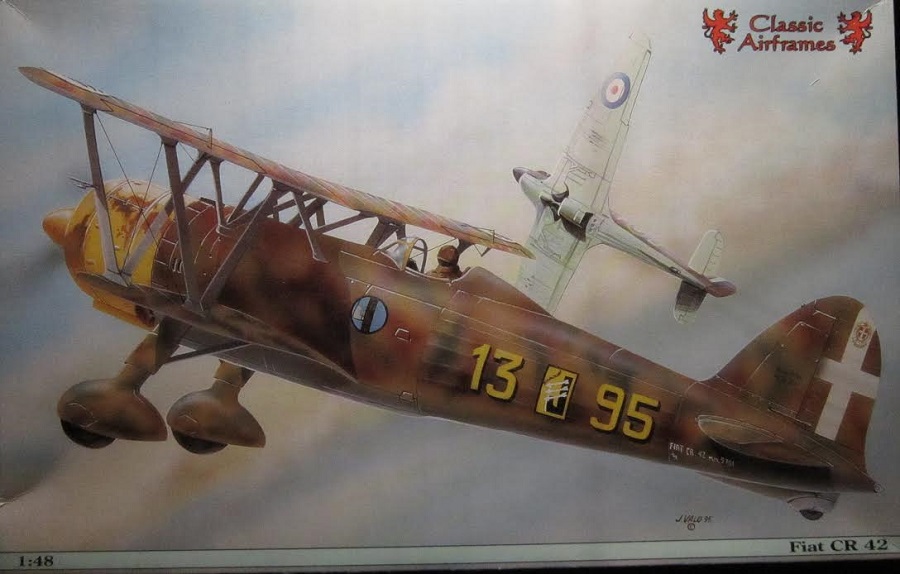 
The Fiat CR.42 Falco ("Falcon", plural:Falchi) was a single-seat sesquiplane fighter that served primarily in Italy's Regia Aeronautica before and during World War II. The aircraft was produced by Fiat Aviazione, and entered service, in smaller numbers, with the air forces of Belgium, Sweden and Hungary. With more than 1,800 built, it was the most widely produced Italian aircraft to take part in World War II.[4]

​The Fiat CR.42 was the last of the Fiat biplane fighters to enter front line service, and represented the epitome of the type, along with the Gloster Gladiator

RAF Intelligence praised its exceptional maneuverability, further noting that "the plane was immensely strong",[5] though it stood little chance against faster, more heavily armed monoplanes. It performed at its best with the Hungarian Air Force on the Eastern Front, where it had a kill to loss ratio of 12 to 1.

​The CR.42 was an evolutionary design based on the earlier Fiat CR.32, which was in turn derived from the Fiat CR.30 series created in 1932.

​The Regia Aeronautica had employed the CR.32 during the Spanish Civil War with great success, which led to Fiat proposing a more advanced fighter based around the supercharged Fiat A.74R1C.38 air-cooled radial engine geared to drive a metal three-blade Fiat-Hamilton Standard 3D.41-1 propeller of 2.9 metres (9 ft 6 in) diameter and a robust, clean, sesquiplane design.

The CR.42's upper wing was larger than its lower wing, a configuration known as a sesquiplane.The aircraft proved exceptionally agile thanks to its very low wing loading, although at the same time, the CR.42 lacked armour and radio equipment.

During evaluation, the CR.42 was tested against the Caproni Ca.165 biplane fighter, and was judged to be superior, although the Ca.165 was a more modern design which boasted a higher speed at the cost of maneuverability. Although the age of the biplane was coming to an end a number of other air forces expressed interest in the new fighter, and a number of early Falcos were delivered to foreign customers.
Soon after its combat introduction, Fiat developed a number of variants.

The CR.42bis and CR.42ter had increased firepower, the CR.42N was a night fighter, The CR.42ASwas optimised for ground attack, and the CR.42B Biposto was a two-seat trainer.
The Biposto was the most extensively modified, with a longer fuselage allowing a second seat to be placed in tandem. About 40 aircraft were produced by Agusta and Caproni Trento. Its length was increased by 68 centimeters over the standard fighter, to a total of to 8.94 m; the height was 23 centimeters less. Empty weight was only 40 kilograms (88 lb) more, as the wheel fairings had been removed.

The CR.42DB was an attempt to improve the type's performance by installing a Daimler-Benz DB 601 V12 engine of 753 kW (1,010 hp). This prototype, MM 469), was flown by test pilot Valentino Cus in March 1941, over Guidonia Montecelio, near Rome. This variant could reach a top speed of 518 km/h (323 mph), with a maximum ceiling of 10,600 metres (34,777 ft) and a range of 1,250 kilometres (780 mi). The project was cancelled as the biplane configuration did not offer any advantages over contemporary monoplane fighter designs. Although it never went into production, to this day the variant has the distinction of being the fastest biplane ever flown.

​It is still not certain how many CR.42s were built. The most likely estimate is 1,819 in total, including the 63 (51 according to some sources) produced under Luftwaffe control and the 140 produced for export.

Classic Airframes was based in Chicago, IL. I believe they went out of business. Their kits were all made in the Czech Republic.
THE KIT:

The box are shows a Fiat CR 42 in combat with a British Hurricane.

A Fascist insignia is below the cockpit on the sides, fuselage number 13, then a squadron logo, 95 in yellow numerals outlined in black. There is a white cross with the House of Savoy symbol on it on the rudder.

This aircraft is with the 83rd Squadriglia, 18th Gruppo, 3rd Stormo, Belgium, Autumn 1940.
Both of the side panels have a small color repeat of the box art, followed by “an unassembled 1/48th scale plastic kit.

Classic Airframe’s European Division P.O. Box address in the Czech Republic is shown and the kit was made there. It contains small parts and is not suitable for children..
WHAT’S IN THE BOX:

A PE fret and photo negative sheet, both backed with a sheet of stiff cardboard to keep them from being bent are in another stapled shut cello bag.

The instructions consist of a single sheet that is folded in the center to create 4 pages in 6 ¼” x 8 ¾” page format.

Page 1 of the instructions has the parts trees and decal sheets illustrations on it. Super glue is recommended to attach metal and resin parts.

Page 2 begins with international assembly symbol explanations, followed by letter A assembly, which is 5 exploded drawings.

Page 3 continues with more letter A assemblies for the cockpit,

followed by letter B assemblies for the fuselage, wings and engine.

Page 4 has the letter D assemblies for the upper wing and its supports, the propeller and spinner and landing gear.

A gloss-coated sheet has 2 schemes on one side in full color as 3-views.

The first scheme is the box art one (already described above).

It has a yellow cowling and a Fascist symbol under the cockpit on the sides, a white triangle with a black cat on it squadron logo on the sides of the fuselage. A white fuselage band with black number 152-5 over it. A white cross with the House of Savoy insignia on it on the rudder.

The other side of this sheet has the history of the CR 42 on it. 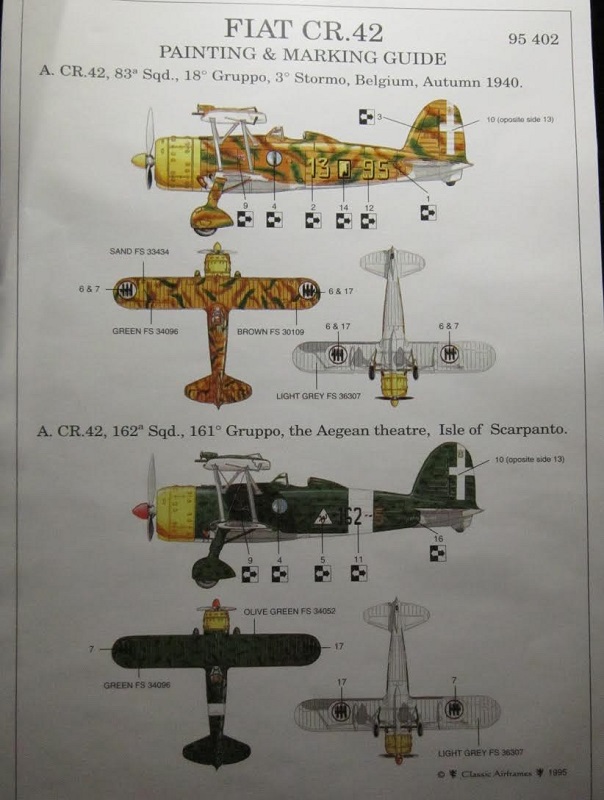 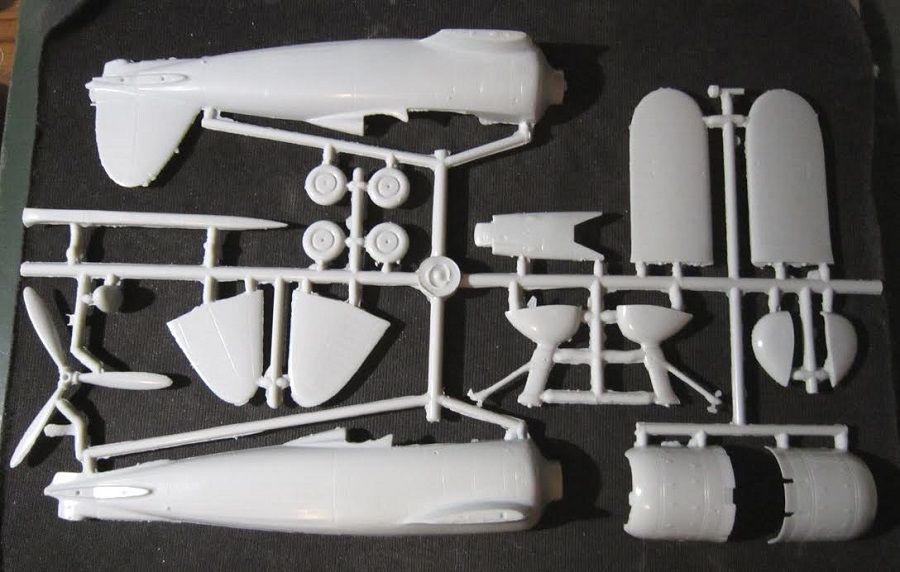 There are 13 light tan resin parts. These are the firewall, levers etc. 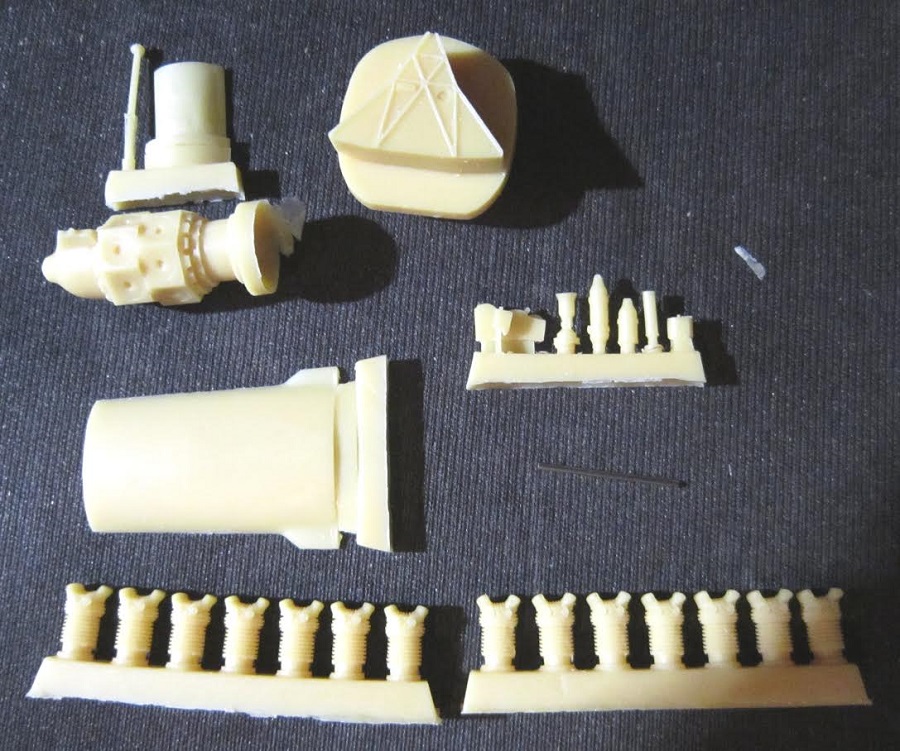 There are 2 clear acetate parts for the windscreen. One is a spare.

The foil photo negative sheet has the instrument dial faces on it. 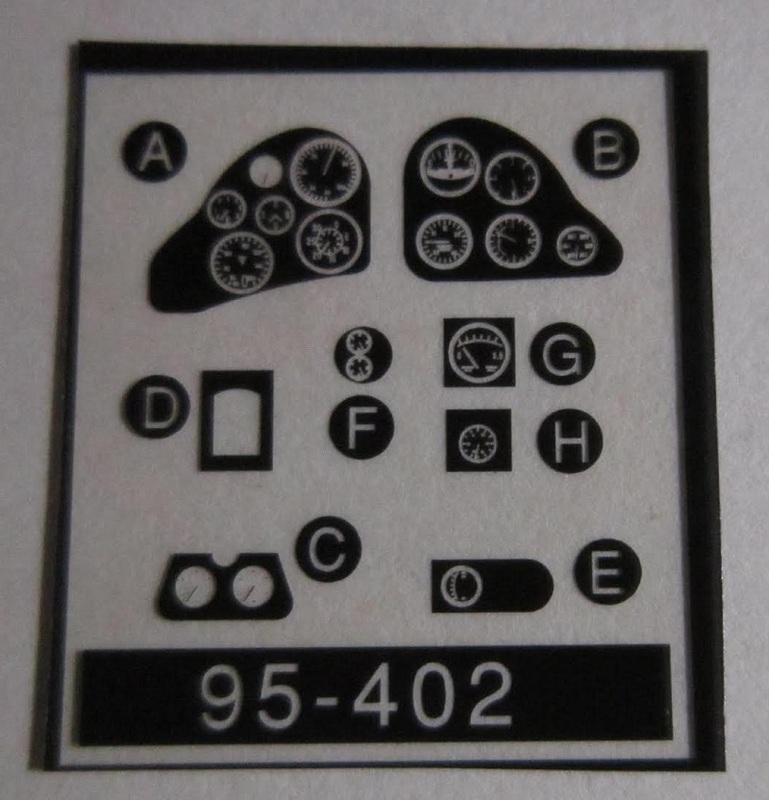 The brass PE fret holds 34 parts (too many for me to try and name each part). 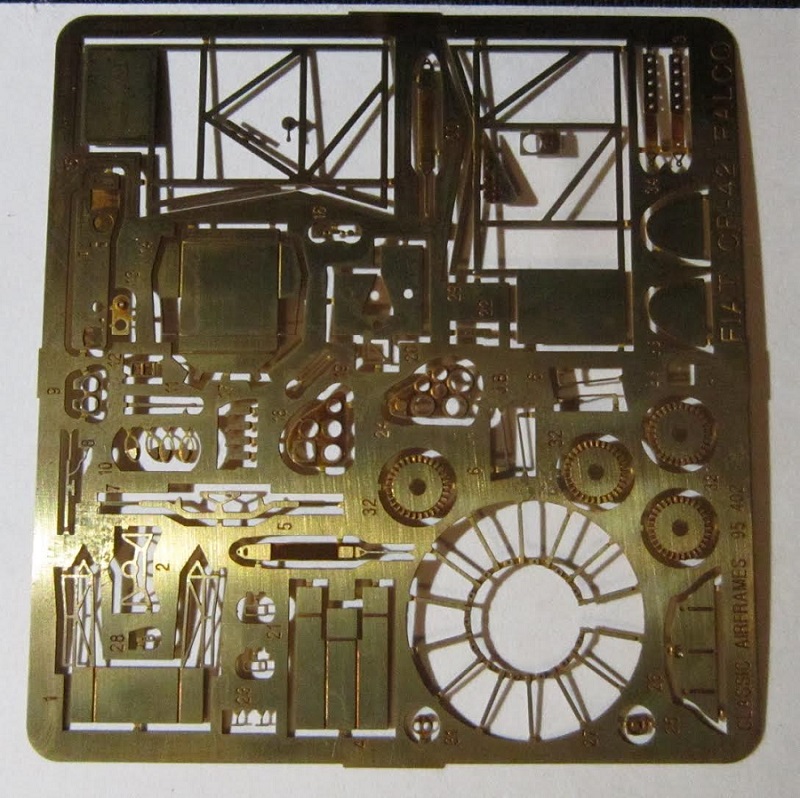 There are 2 decal sheets in the kit. The larger one has the scheme markings on it.

​The smaller one is a correction to the wing insignia on the large sheet, which have 2 of those markings with the black axes pointed in the wrong direction. 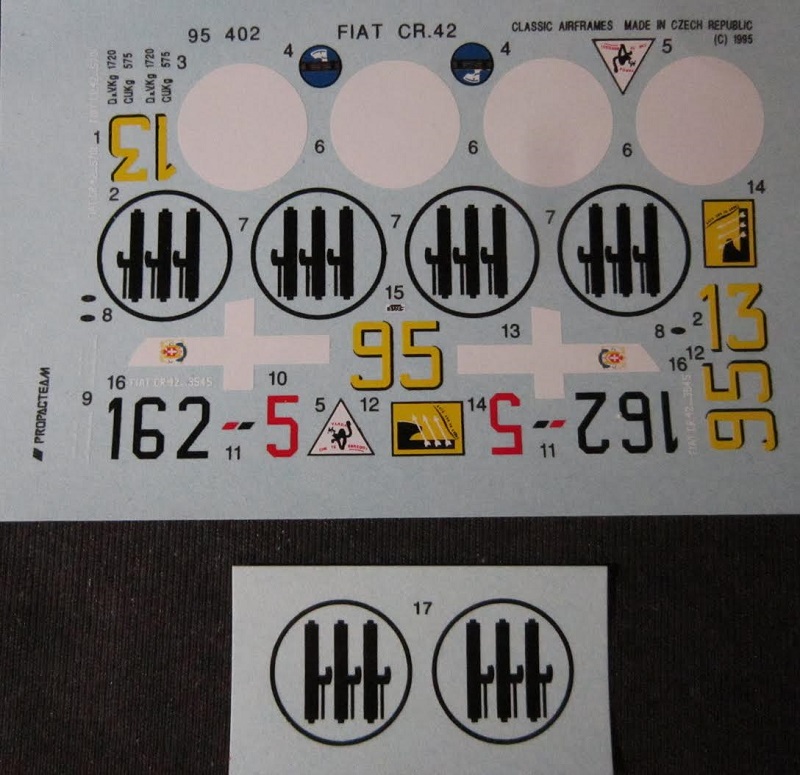 This is a limited run multi-medium kit and it is not intended for novice modelers. It also is not a weekend project. Highly recommended to skilled modelers.

I purchased my kit in the 90’s at my local hobby shop.