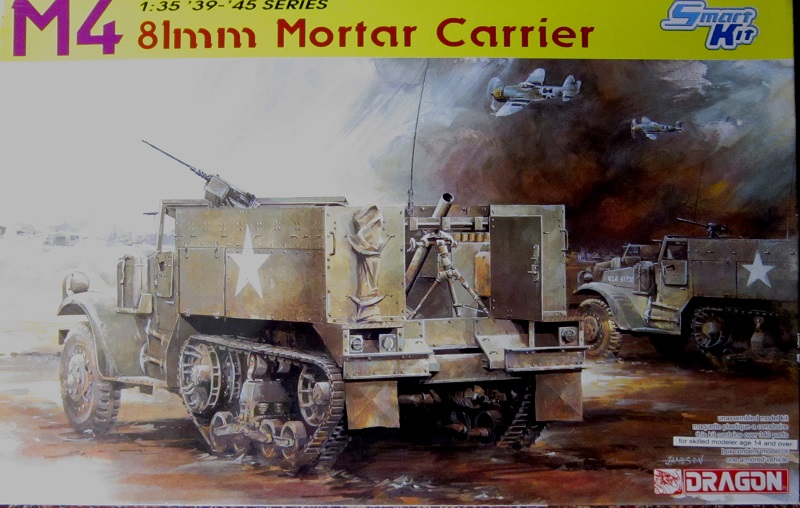 DML Dragon is a prolific model company based in Hong Kong China. They make all manner of different model subjects in all the popular scales.

The M2 Half Track was an armored vehicle produced by the United States during WWII..

A similar vehicle was built by international Harvester Company as the M9 Half Track Car.

The half-track design had been evaluated by the US Ordnance department using Citroën-Kégresse vehicles.

The Cavalry arm of the US Army found that their wheeled armored scout cars had trouble in rainy weather due to weight and high ground pressure.

In 1938, the White Motor Company took the Timken rear bogie assembly from a T9 half-track truck and added it to an M3 Scout Car, creating the T7 Half-Track Car.[6] This vehicle was woefully underpowered, and when a further requirement came down from US Army artillery units in 1939 for a prime mover (artillery tractor), a vehicle with an uprated engine was devised, then designated the Half Track Scout Car T14.

By 1940, the vehicle had been standardized as the M2 Half-Track car. The M2 design was recognized as having the potential for general mechanized infantry use and with a larger body the M3 Half Track was created. Both the M2 and M3 were ordered into production in late 1940. M2 contracts were placed with the Autocar Company, White and Diamond-T. The first vehicles were received by the army in 1941.

It was supplied to artillery units as prime mover and ammunition carrier for the 105mm howitzer, for armored infantry units to carry machine gun squads, and to armored reconnaissance units.[7] For the latter it was to be an interim solution, until more specialized vehicles could be fielded.

Between 1942 and 1943, these vehicles, just like the larger M3s, would receive a number of modifications to the drive train, engine, and stowage, among other things.

Total production of M2 and derivatives was about 13,500 units. Later, to meet the needs of the Lend-Lease program, the International Harvester Company was brought in to manufacture vehicles similar to the M2, these M9 vehicles adding a further 3,500 units. M4/M4A1 81mm MMC - M2 based Motor Mortar Carriage equipped with the 81 mm M1 mortar. The mortar was intended to be fired dismounted from the vehicle, but could be fired in an emergency to the rear from a base inside the vehicle. The A1 modification allowed the weapon to be fixed facing forward and fired from within the vehicle.

The box art shows an M4 mortar carrier and some other U.S. half-tracks advancing on a city that is engulfed in smoke and 2 P-47 Thunderbolts are overhead attacking the city. They both have checkerboard cowlings. The M4 and the other half-tracks are all in olive drab with white stars on the sides. No other markings are shown.

One side panel has 3 different color profiles of the M4. All are in overall olive drab.

One has just a white star on the side. The second one has a large white no. 1-32 on the side with no star and the third one also has no star but a serial number in whte of U.S.A. 4015367 on the side of the engine compartment. Next to these is color illustrations of the brass PE fret and decal sheet in the kit. There is a CAUTION that warns against using glue and paint near a flame and you should be in a well ventilated room. This is in 6 languages including English. Under that it says that the kit is not suitable for children under 3 due to a choking hazard with its small parts. This is on a white sticker with black print in 20 languages including English. The kit is said to be for modelers 14 and older again. The copyright date of 2007 is mentioned and DML Dragon’s street address in Hong Kong is provided along with their web address.

The other side panel and the bottom of the box are both festooned with black and white pictures of features of the kit.

Attached to a stiff card that has a tread pattern printed on it are another light gray tree in a cello, a clear tree in cello, the slide-molded perforated idler wheels and the drive sprockets in 2 zip-locked cellos, a zip locked cello contains both the brass PE  fret and the two turned aluminum 81mm mortar barrel sections and the decal sheet in the last cello. The card and all these other things are in another large cello. Very good packaging DML.

The instructions complete the kit’s contents. It consists of a single sheet that accordion folds out into 8 pages in 7 3/8” x 13 3/8” page format.

Page 1 begins with a black and white repeat of the box art. It then says that the project was supervised by Hirohisa Takada and the technical drawings were provided by H3 Design Office. Below this is the parts trees illustrations. Some parts are blued-out, meaning they are excess and not needed to complete the kit.

Page 3 through the top of page 7 have a grand total of 15 assembly steps.

The bottom of page 7 has a 4-view for an M4 with an Unknown unit, USA 1944. It is in overall olive drab with white stars on the sides of the fighting compartment, the top of the engine hood and the engine air intake grill slats. The white name PROWLER is in small letters on the bottom of the cab doors and a white SPHQ13 is on a plate on the front of the left front fender.

The first one is also with an Unidentified unit, USA. It too is in overall olive drab with the white serial no. U.S.A. 4015367 on the sides of the engine hood and no other markings.

The second one is with the 2nd Armored Div., Belgium 1945. It is in overall olive drab with the large white 1-32 sides of the fighting compartment. No other markings are shown.

Below this is DML Dragon’s street address for their office in Graz, Austria and the copyright date of 2007 is repeated. The bottom of the page has the decal application instructions in 6 languages including English. 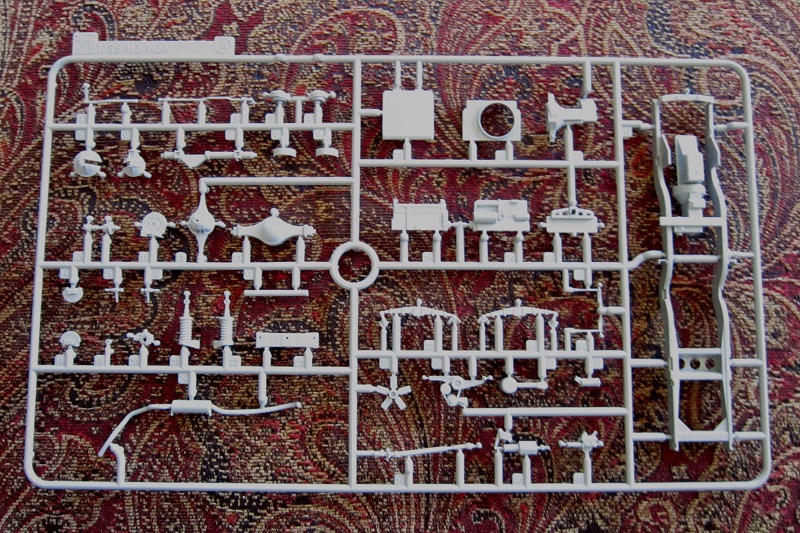 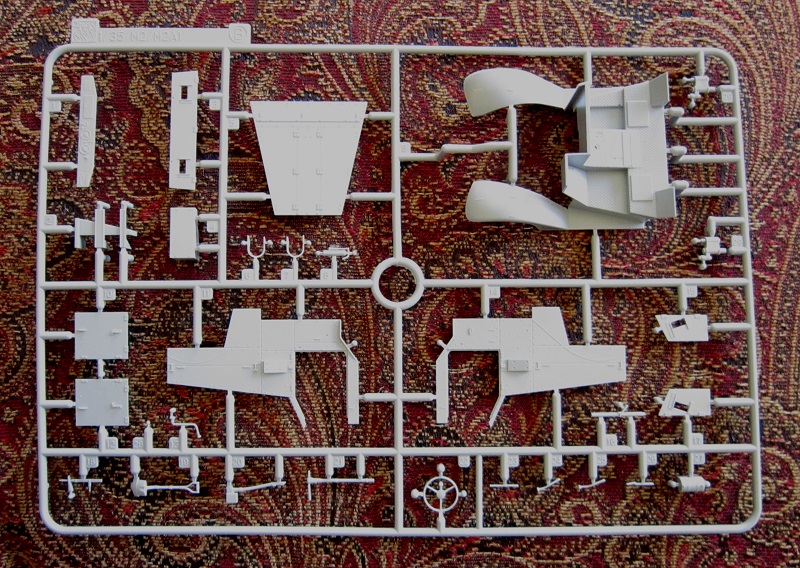 I don’t know what the parts are on light gray letter C parts tree. Anyway, there are 29 parts on this tree and only 8 of them are to be used. 21 of them are blued out as being excess. 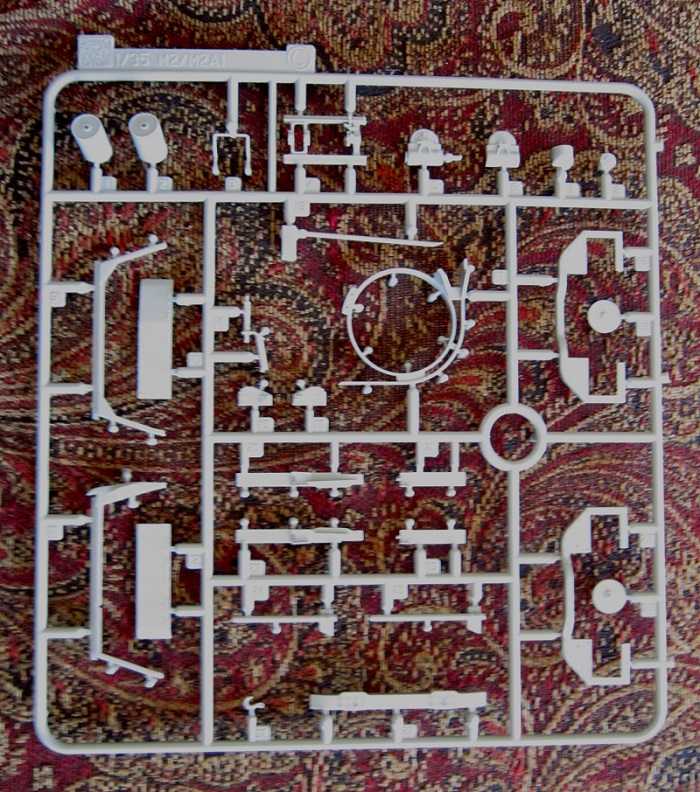 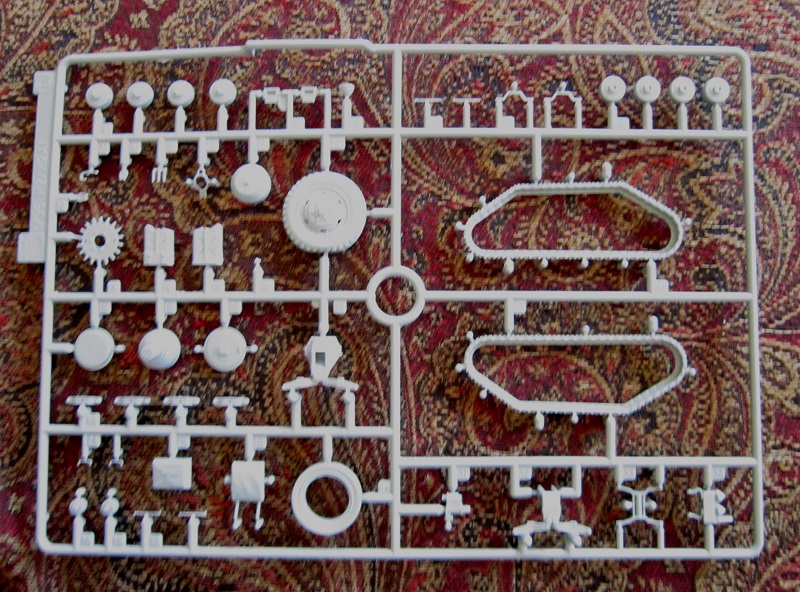 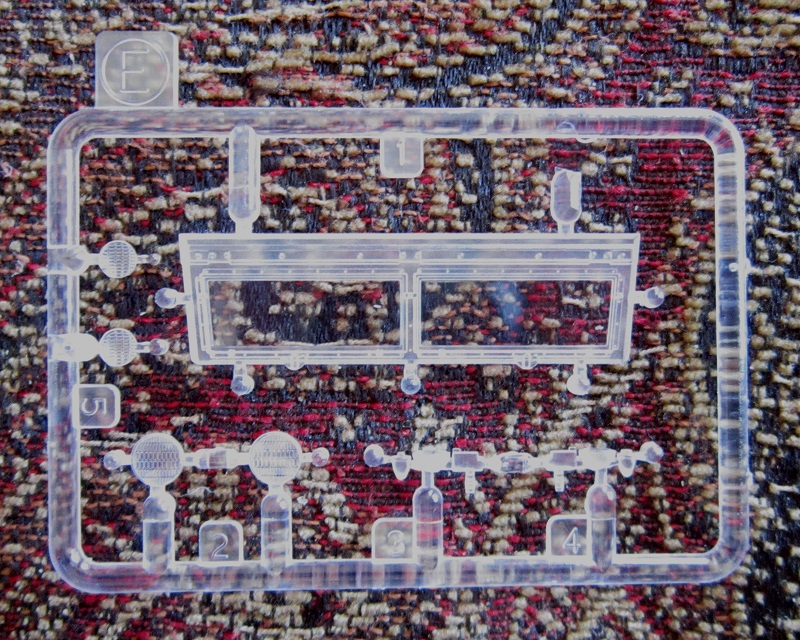 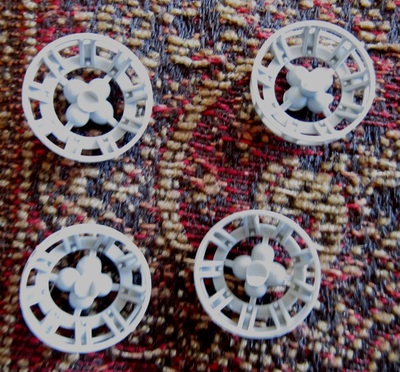 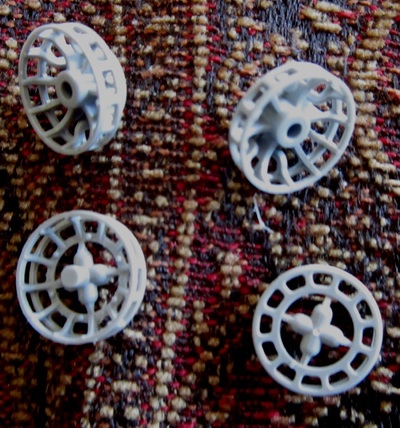 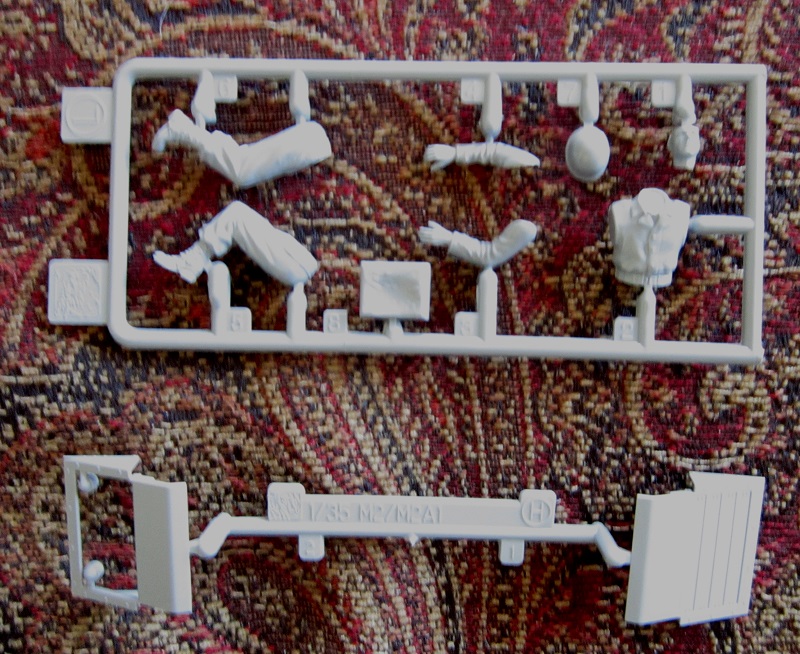 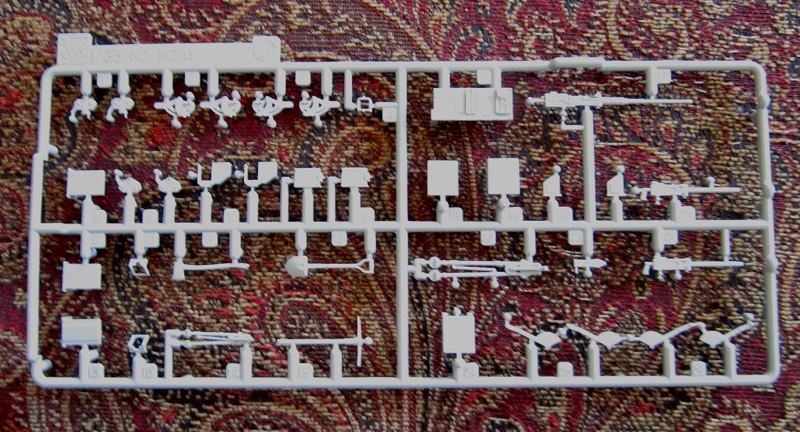 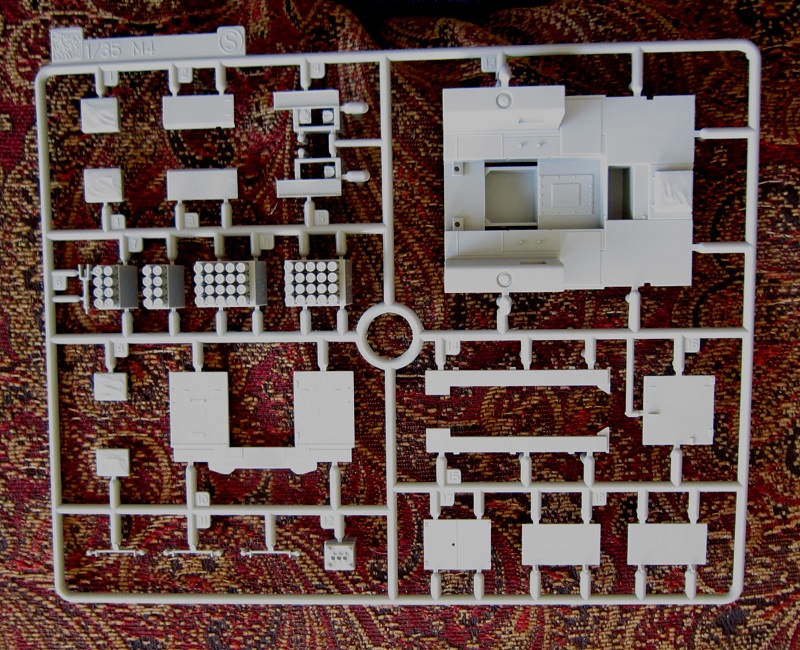 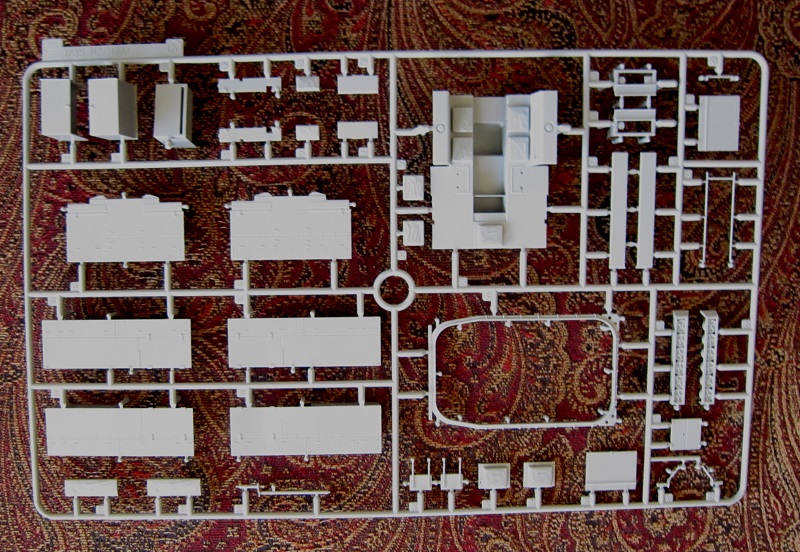 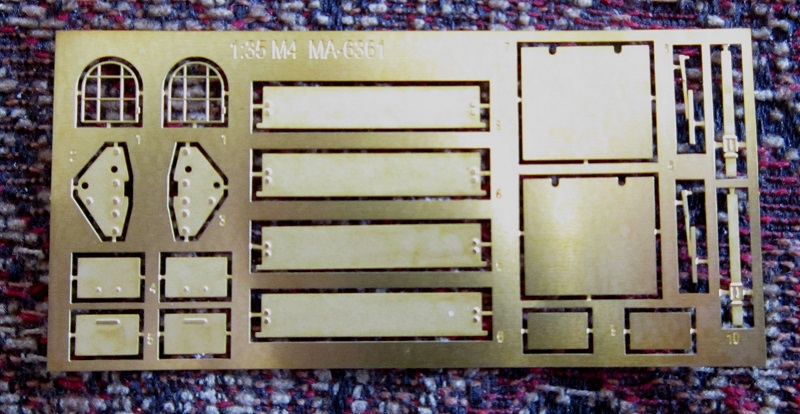 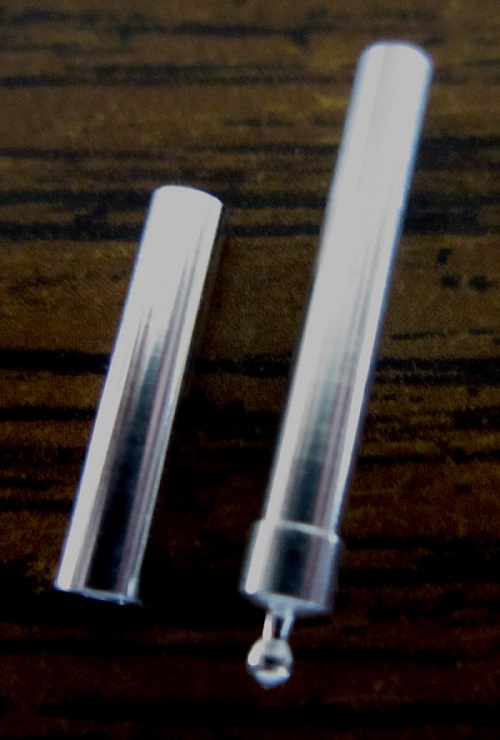 Letter T is the base plate and legs for the mortar

The decal sheet completes the kits contents. The sheet has a lot of white stars surrounded with a circle in a couple sizes. However, this marking is not shown to be used on any of the three schemes shown in the instructions. Strange! 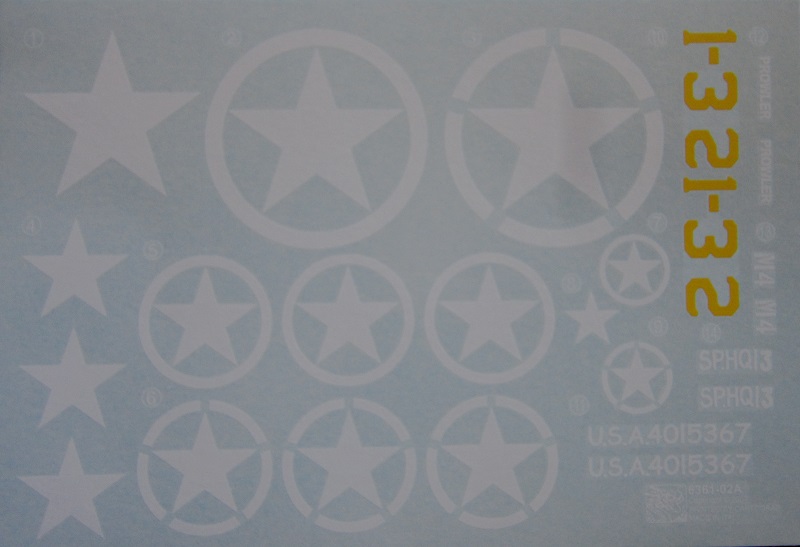 More crew figures to put in the fighting compartment would have been nice.

I purchased my kit at my local hobby shop. This kit is jam packed with parts and well worth the price. I recommend it to modelers of intermediate building ability.