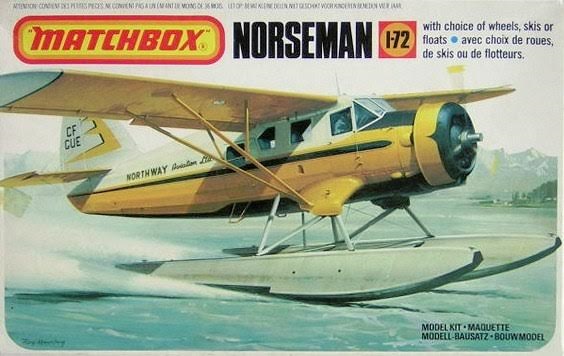 First produced in 1938, the Noorduyn Norseman aircraft holds a unique place in Canadian history. This high-wing monoplane , rugged and suitable for freight or passenger transport, was the only aircraft ever manufactured by Noorduyn Aviation.

Uniquely suited to the Northern Lakeland environment whence it originated, it could quickly and easily be converted to any of its three designs of ski, float or land-plane.

Indeed, so adaptable did it prove to be that there can be few roles it has not played in its long history, including those of transport, reconnaissance for the Allies in all theaters of WWII.
​THE KIT:

The box art shows a Norsman on pontoons making a takeoff run off a lake.

It has a white spine and rudder over yellow bellow. A red border stripe is above the yellow and on the nose of the cowling. The pontoons are white. A yellow zig zag pattern is on the rudder outlined in red with a black serial no. CF-CUE behind it. On the sides of the fuselage is NORTHWAY AVIATION LTD in black lettering. The wings and elevators are yellow with white tips on the wings. There is a black anti-glare panel in front of the windscreen.

The box art says the kit has a choice of wheels, skis or floats included.

One side panel show an illustration of a Norseman on wheels. It is overall white fuselage with yellow wings and elevators. It carries U.S. star and bars insignia on the sides of the fuselage and the serial no.35314 in yellow outlined in black on the rudder sides.

A second illustration shows the front half of a Norseman on skis. Its fuselage is overall white with yellow wings. A red stripe outlined in yellow is along the sides of the fuselage. No markings are shown.

The other side panel mentions the inclusion of the skis, floats and wheels in 4 languages other than English. This is followed by an explanation of what certain symbols on the box equate to in level skills needed to build the kit in 3 languages, including English.

Next is the copyright date of 1981 and Lesney Products & Co. Ltd., Printed and made in England. Specification and color content subject to amendment. Paint and cement not included.

Oddly, the bottom of the box has a clear window in it to allow the customers to partially see things inside.

It also has two full color 3-views for marking and painting schemes.

The first one is the box afrt subject (already discribed above) It is said to be an aicraft of the Northway Aviation Ltd. Company, Manitoba, Canada 1974.

The second one is in olive drab over gray under-carraige. It has black and white D-Day Invasion stripes over the wing roots and the rear of the fuselage. The U.S. star and bars insignia is over the fuselage invasion stripes and also above the left wing and below the right. It carries a yellow serial no. 35314 on the rudder. It is a UC-64A Norseman with 8th Air Force Service Command, Stansted UK, August 1944

Below this 3-view it says "Matchbox is the registered trade mark of Lesney Products & Co. Ltd., London, England.
​Matchbox was always notorious for doing their model kits with each tree molded in a different color. This kit is no exception to that practice.

It has one dark gree tree, a chalk white tree and a bright yellow tree and 2 clear trees. Actually because of this little painting is needed maybe.

There are no parts trees illustrations in the instructions. However, there are number tabs next to the parts on the trees.

The instructions consist of a single sheet folded in the center to create 4 pages in 8" x 10" page format.

Page 1 of the instructions begins with a listing of suggested colors to use to complete the model in multiple languages, including English. Bellow there are one paragraph histories of the Norsman in English, French, German, Italian, Spanish and Dutch.

The kit contains one dark-green tree, a chalk-white tree a bright yellow tree and 2 clear trees, the decal sheet and the instructions. 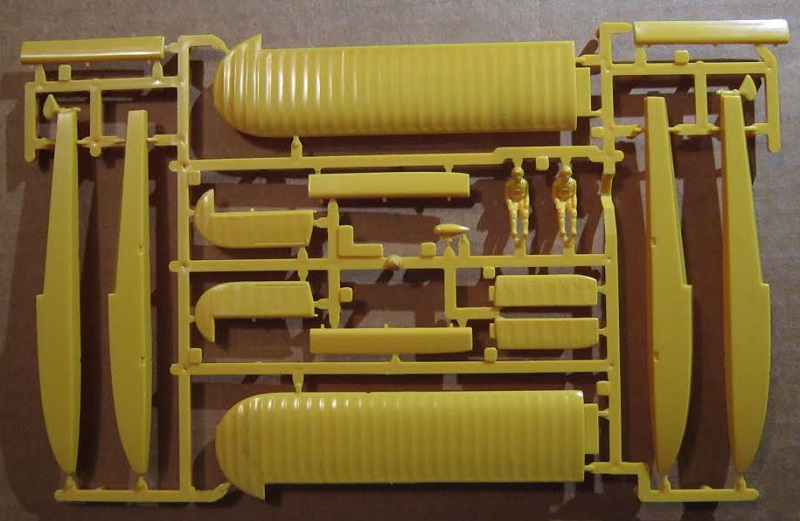 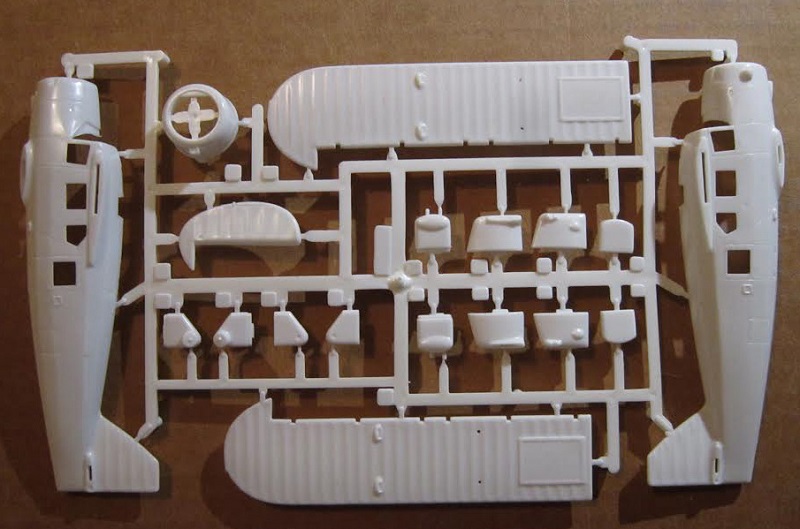 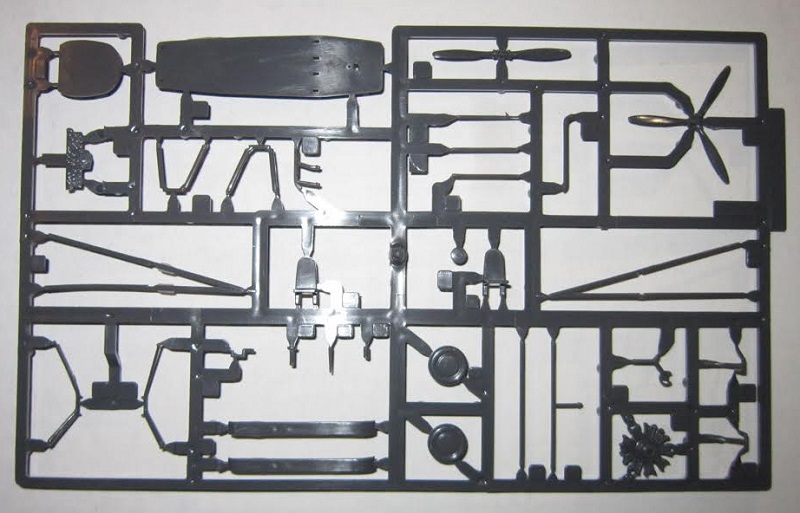 ​One clear tree holds the windshield and cabin windows. (10 parts)

Matchbox made a mistake at the factory and included 2 of this tree in the kit.

The other clear tree has two parts on it for the display stand.

Parts are not cello bagged in the kit. 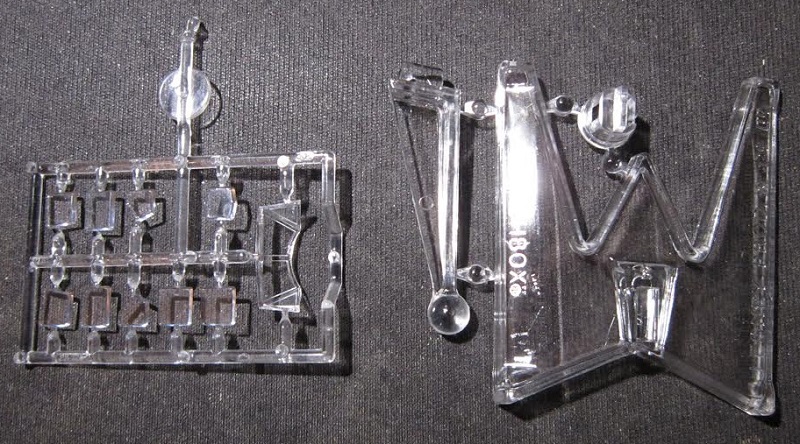 ​The decal sheet completes the kits contents. It has a frosted sheet on its face to protect it from scratching. 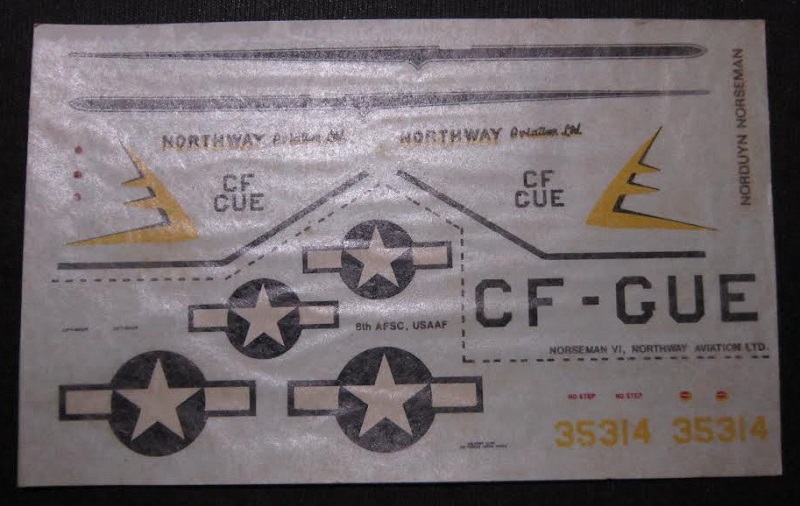 This kit is rather good for state of the art back in the 70's. I really like the choice offered of skis, floats or wheeled options and the colors of the trees that will maybe things to be painted.

I bought this kit back in the 70's at my local hobby shop.

Price tags still on the end of the box show that the price then was $6.00 with a mark-down to $5.39. I can just imagine what this kit would be priced at today.
​It is for sale for the right offer.