The P-47 made significant contributions to the outcome of WWII after overcoming early troubles and critics who were horrified at the mammoth proportion of the corpulent fighter.

The "Jug" was eventually the plane that most of the leading American aces made their reputation in; including Lt. Col. F.S. Gabreski (31 victories), Cpt. R.S. Johnson (21 victories) and Col. H. Zemke (20 victories).

Equipped with auxillary tanks, Thunderbolt's were excorting bombing missions in early 1943 that ranged as far as Berlin.
​THE KIT:

The box art shows four P-47s in what looks like a dogfight. There is a trail of smoke leading downward of the box art.

The P-47 in the foreground is in a wave pattern of brown and dark green over a grey under carraige. It has a white cowling front and white bands over the wings and elevators. It carries the white fuselage code KW (roundel) R and a black serial no. HD269 under the elevators. On the side of the nose is the white words "Honeysuckle Rose".

The other 3 P-47's in the distance are too far away to see anything other than the white bands over the wings and elevators and the white cowling front. No other markings are visible.

One side panel of the box lists features of the kit in 8 languages, including English. Each language is labeled with color illustrations of the roundels those countries use that speak those languages.

The other side panel shows the SKYBASE display stand in various positions.

Around the sides of the kits tray there are color box arts for 8 other aircraft kits that Frog marketed:

The bottom of the tray has two 4-views for marking and painting schemes.

2. A P-47D in overall OD above a grey undercarraige. It has 3 white bands around the wings and the fuselage. The fuselage no. is white 91. It has a white Cross of Lorraigne on the rudder over a yellow serial no. 419691. There is a logo of a grey shield with a black lion on it under the cockpit.

The kit contains 4 jet black trees, a medium blue tree, a clear tree, the decal sheet and the instructions.

The instructions consist of a single sheet that accordion-folds out into 8 pages in 4" x 7 1/2" page format.

The 1st page has general instructions on it in 8 languages, including English.

Page 2 has SPECIAL INSTRUCTIONS and international assembly symbol explanations down the left side of it.

Spread from the right side of page 2 to page 5 are 7 assembly steps and a customer service coupon.

Pages 6 and 7 have text to walk modelers through the builds with illustrations of various parts of the kit showing what to do there.

Page 8 has a one paragraph history of the P-47 in the 8 languages.

Parts trees are not cello bagged.

The 1st jet black tree holds: the cockpit floor, landing gear and their covers, one each upper and lower wing half etc. (9 parts). 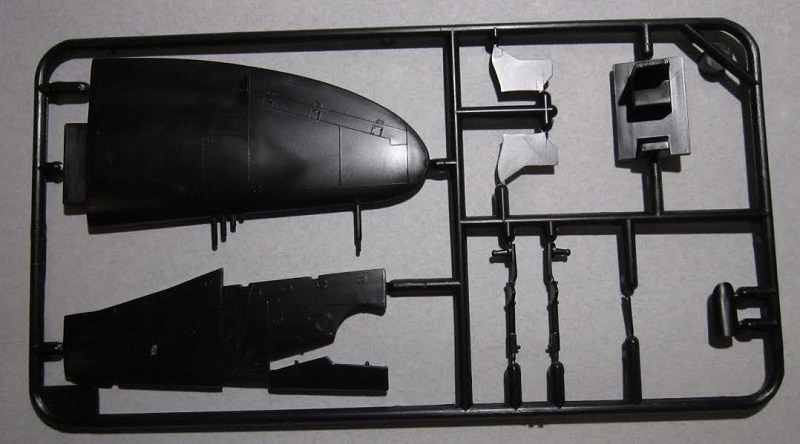 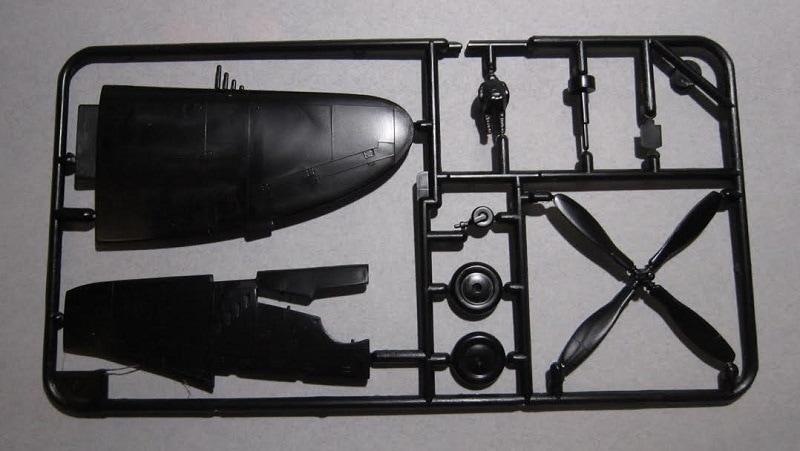 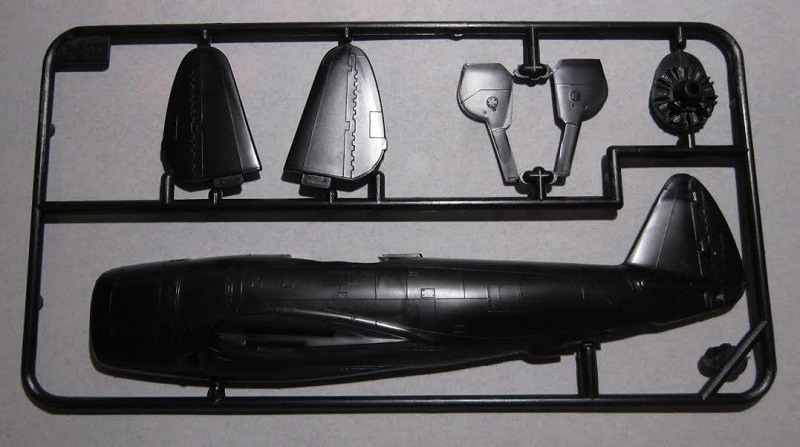 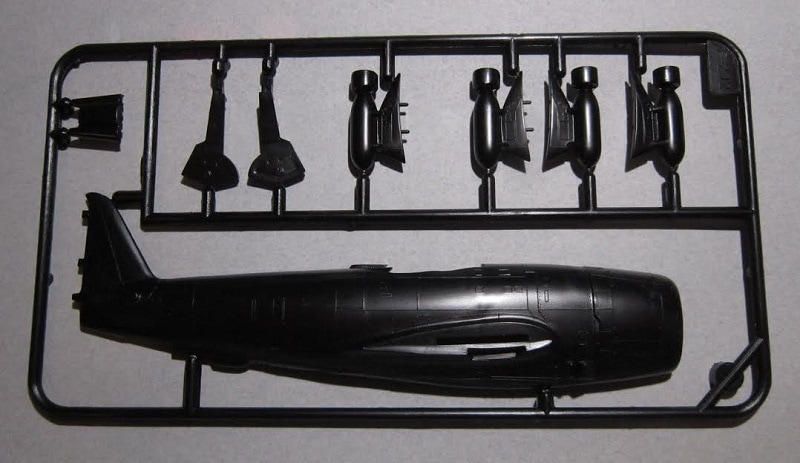 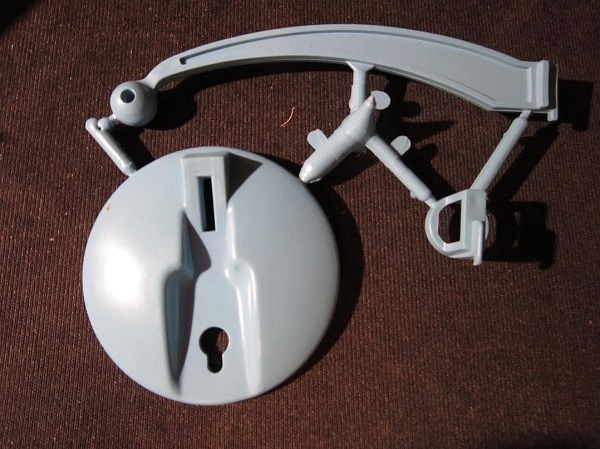 ​The clear part is the cockpit canopy. It is molded shut. 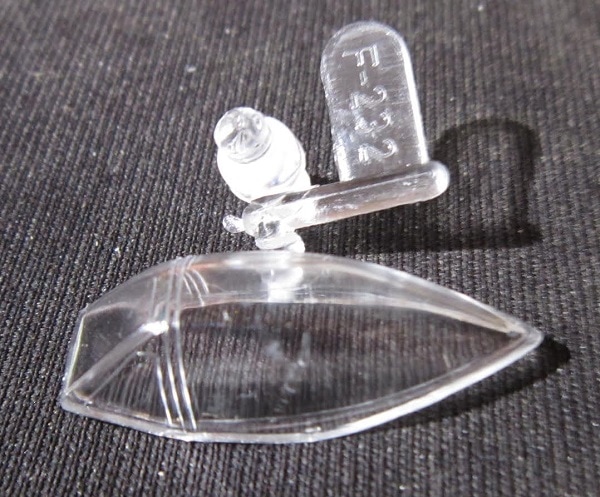 ​The parts trees are not alphabetized.

There are no parts trees illustrations in the instructions and no part number tabs next to the parts on the trees. This is going to mean extra work to make sure you have the right parts for the assemblies. Bad move Frog.

Control surfaces are all molded solid and the panel lines are of the raised variety.

The decal sheet completes the kits contents. A frosted film is provided to protect the face of the decal sheet from scratching. However, it was floating around loose in the box and not protecting a darn thing. So, I stapled it to the decal sheet. 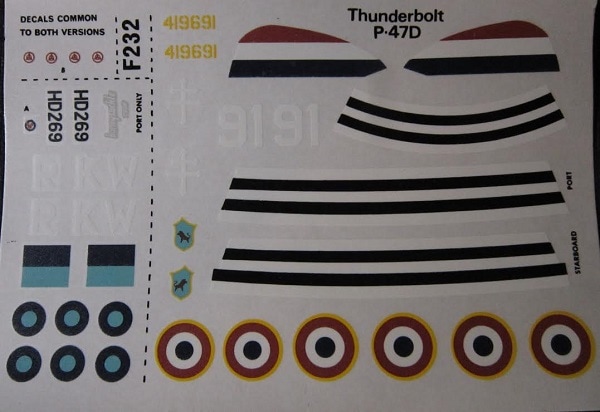 ​This is a nice older kit of a popular U.S. fighter aircraft among modelers.

Recommended.
​I purchased my kit at my local hobby shop back in the 70's for a whopping $2.25. I am willing to sell the kit for a reasonable offer.