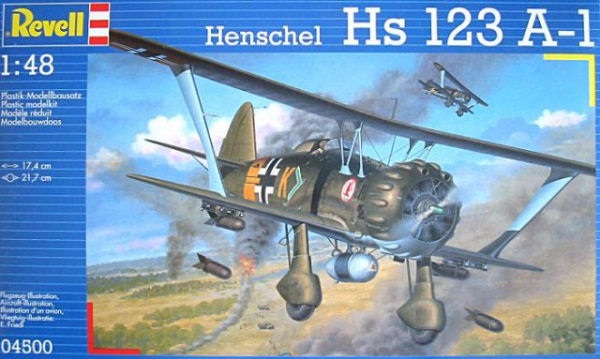 The Henschel Hs 123 was a single-seat biplane dive bomber and close-support attack aircraft flown by the German Luftwaffe during the Spanish Civil War and the early to midpoint of World War II. It proved to be robust, durable and effective especially in severe conditions. It continued to see front-line service until 1944, only to be withdrawn due to a lack of serviceable airframes and spare parts (production ended in 1940).

Revell of Germany is the European branch of Revell/Monogram USA.

This model kit has really been around the block, so to speak, over the years.  The mold is originally from Esci, which was an Italian company.

The molds first went to Ertl in Dyresville, Iowa USA. Ertl discontinued aircraft and AFV kits and the molds went to Amtech.

Amtech added a resin cockpit interior and injection molded un-spatted landing gear to the kit. They also sold these resin and plastic parts separately to be used in the earlier Ertl/Esci kits and the kits that were molded by Italeri with the same molds.

Amtech also changed the decal sheet for their offering and sold this sheet separately too.

I believe the decal sheet was changed in the Italeri box and also in the Tamiya box (yep…Tamiya got the Esci molds later too).

Now the molds are in Germany at the Revell company there. So, this kit has been all over the world and it would not surprise me now if the molds went to any other companies than the ones mentioned above.

The kit originated in the early 80's.

The kit comes in an end-opening type box. It is not shrink wrapped and the end flaps are held shut with circular pieces of scotch tape. I am no fan of end-opening boxes. Parts find their way past the end flaps to become lost.

The box art shows 2 Hs-123's on a bombing run. Both are in dark green above light blue with dark green undercarriage. The one in the foreground a fuselage code of a yellow horizontal bar over a yellow fuselage band, followed by the German cross, a yellow K and a red chevron outlined in white. There is a white circle with a red devil on it on the sides of the nose. No swastika is shown, as this kit is made by Revell of Germany where the swastika is outlawed. There is no swastika on the kit’s decal sheet either.

One side panel has a listing of paint colors suggested to use to complete the model.  Next to this is a list of the features of the kit: detailed cockpit, detailed BMW radial engine, movable propeller, ventral auxiliary fuel tank, decals for 2 Luftwaffe versions and one Spanish Civil War version.  This is all in 4 languages including English. Next to these are 4 walk-around type photographs of various areas of the model made up.

The other side panel has a one paragraph history of the Hs-123 in the same four languages. There is mention that the kit does not include glue or paint and that it is intended for modelers of 10 years age on up. The kit is made in Italy and the box and instructions printed in Germany. Revell of Germany’s street address is shown too.

The back of the box has the full color box arts of 6 other aircraft kits that Revell of Germany markets and a photo of the air brush, paints and cement that they sell. The box arts are for:

Kit no. 4584 a F/A-18E Super Hornetmethods and Revell of Germany’s street address and phone and fax numbers.

Kit no. 4481 a Eurocopter EC145 ADAC/Securite Civile Unfortunately no scale is shown for what scale these kits are in.

Next to these box arts is an explanation of what the different five skill levels that Revell marks their kits with mean.  This kit is labeled as being a “3”. That means it is “more demanding – a model with up to 100 parts”.

Inside the box is a single sealed cello bag that holds the  3 gray parts trees and the single clear windshield part. The instructions, a sheet of warnings and the decal sheet complete the kit’s contents.

The warning sheet is in 21 languages including English.

The decal sheet has a protection sheet for the face of it to prevent scratching of the lettering. However, this sheet is floating around loose in my kit, so of no value in respect of what it was intended to do.

The instructions consist of a 12 page unbound booklet in 8” x 12” page format.

Page 1 begins with a black and white photo of the model made up. This is followed by the history of the Hs-123 in German and English.

Page 2 begins with “read before you start” instructions in 18 languages. This is followed by illustrations of various assembly methods and Revell of Germany’s street address and phone and fax numbers.

Page 3 begins with explanations of the international assembly symbols used in the assembly step drawings. This is followed by “safety advice” in the multiple languages.

Page 4 is a listing of paint colors suggested to use to complete the model. These are shown by pennant symbols with alphabet letters on them and the colors are called out in the multiple languages again.

One scheme is for a Hs-123A-1 of II/SG 1, Russia 1943. It is in dunkleguen over hellblau with aluminum prop blades. It has a yellow fuselage band and the fuselage code is a red chevron outlined in white, followed by a yellow K + yellow horizontal bar outlined in black and partially over the right end of the cross. Further drawings are included for placement of stencil marks. There is an illustration of a red devil on a white circle on the forward sides of the fuselage. This is the box art subject.

The third scheme is for a Hs-123A-1 of the Spanish 33rd Gruppo, Villanubia/Valladolid, Spain, Summer 1952. It is in overall pale gray. It has aluminum prop blades. There is a lightning bolt down the sides of the fuselage in blue with white outline. The fuselage code is black lettering  with white outline that is 33 roundel 55. A small serial number in black of BV1-3 is on the tail and the rudder is white with a large black X on it. An alternate fuselage code of black lettering with white outlines of 1 roundel 50 is offered for this aircraft and the small black tail serial number of BV1-5.

Pages 11 & 12 of the instruction booklet are blank. 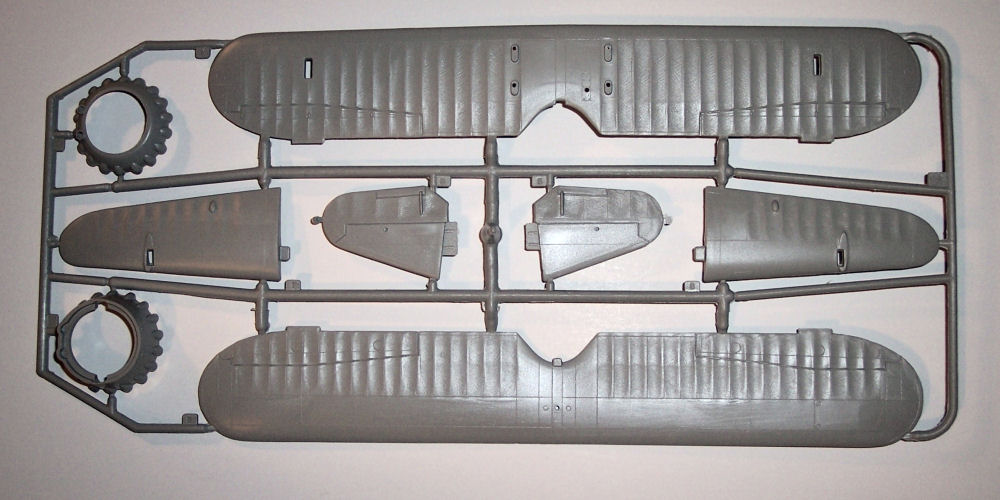 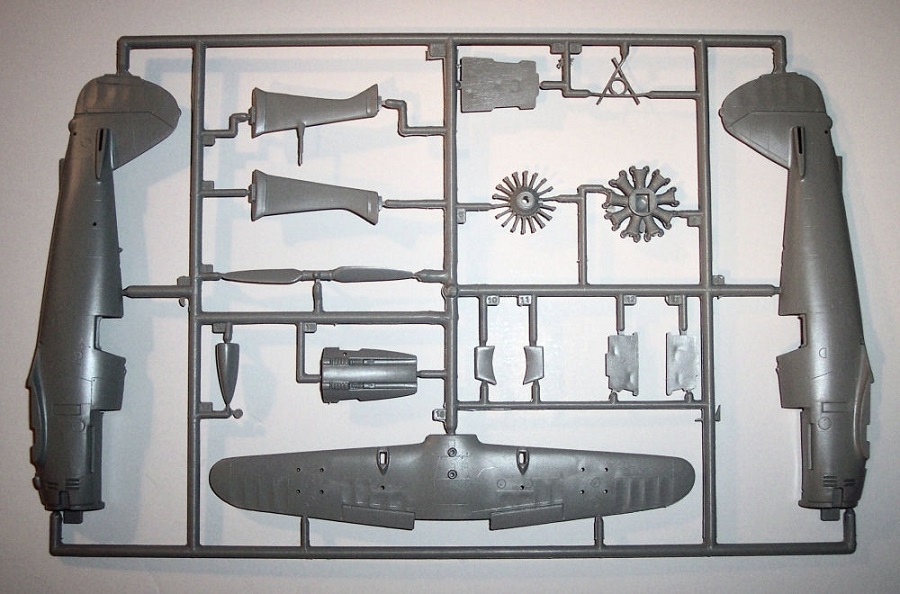 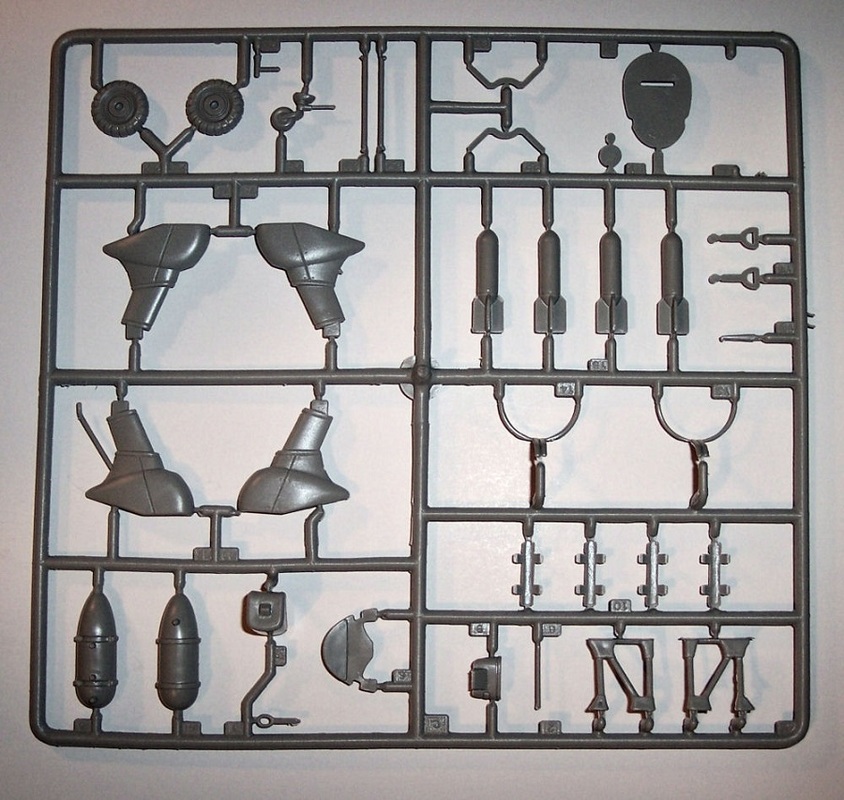 The single part that is the clear cockpit windscreen completes the kit’s contents. 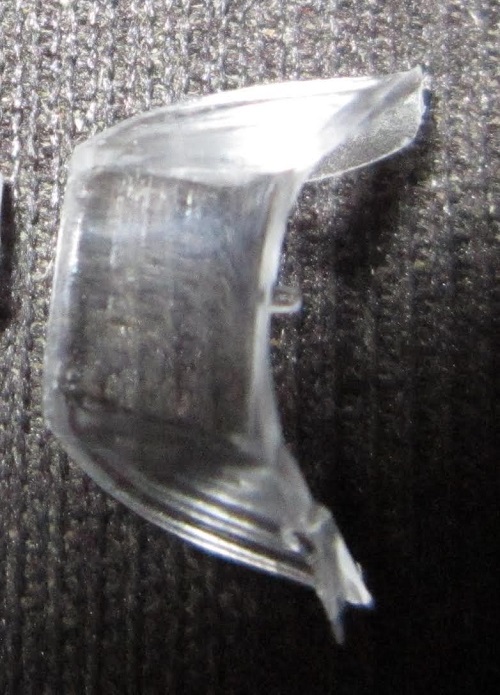 I later bought Amtech’s kit of the resin cockpit parts and the injection molded parts to do the landing gear as un-spatted.