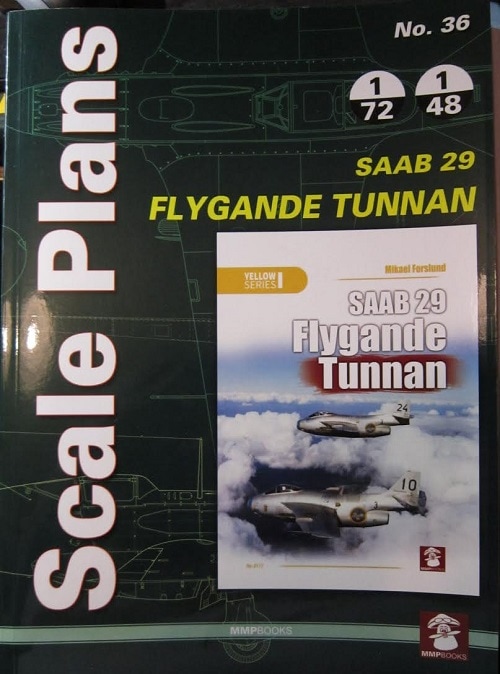 The Saab 29, colloquially called Flygande tunnan (English: "The flying barrel"), was a Swedish fighter designed and manufactured by Saab in the 1940s. It was Sweden's second turbojet-powered combat aircraft, the first being the Saab 21R; additionally, it was the first Western European fighter to be produced with a swept wing after the Second World War, the Me 262 being the first during the war. Despite its rotund appearance, from which its name derives, the J 29 was a fast and agile aircraft for its era. It served effectively in both fighter and fighter-bomber roles into the 1970s.

Mushroom Model Publications in based in the U.K. They have all their books printed in Sandomierz. Poland in English by their associate Stratus. Stratus also does their own line of books in both English and Polish.

The cover of the portfolio shows the cover art of MMP's book on the Tunnan (Yellow series no. 8117) posed against a dark green background that has a yellow line drawing of what appears to be a Spitfire.

This is a soft cover portfolio that holds line drawing plans that are to 1/72nd and 1/48th scale.
The plans can be removed from the portfolio or left in it.

On one side of the first page there is a side view of a SAAB 29a version and a 4-view of a 29b version, plus illustrations of bombs, rockets, a drop tank and a target reflector pod, all to 1/72nd scale.

The reverse side of this sheet shows a 3-view of a 29c version and 4 side panels of a 29f version including the photo-recce version.

The next sheet has a profile of the 29b along with line drawings of the formers inside the fuselage and the drop tanks, target reflector pod and rockets to 1/48th scale.

The reverse side of the sheet has 2 side profiles of th 29c version in 1/48th scale.

This is a very detailed set of plans for this Swedish aircraft.

Casemate is the U.S. distributor of MMP books and a complete listing of MMP titles can be found on their site at: