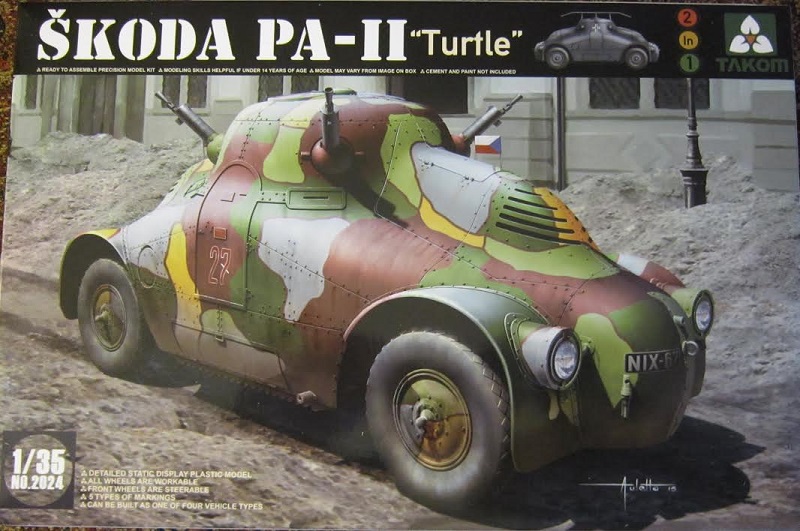 
MSRP: $37.00
HISTORY:
​The PA-II (“Armored Car II”) was developed by Škoda, which capitalized on the experience gained on the previous semi-experimental PA-I, in 1922-23. But, this time, the Chief Engineer’s choice was to provide the hull with an all-around streamlined armor bodywork. This quickly earned the new vehicle the nickname of “Želva” (Tortoise), never officiated.

Instead, the Army designation was Obrněný Automobil model 1923 (OA vz.23). By the fall of 1923, the blueprints were ready and submitted to the the Army. 12 vehicles were ordered, to be delivered until December 1924 and mid-1925.

Although the chassis was roughly identical to the experimental PA-I, the armored body was entirely new. It had unusually curved shapes, which seemed like an Art Deco essay, but were dictated by cold considerations of maximal protection effectiveness. Instead of casting the armor, only possible for large thicknesses, the plates were hammer-shaped, 5.5 mm (0.22 in) at the thickest.

This was the same process by which the bodywork artists tailored cars for the rich and famous, these skills being present at Skoda as well, descended from a long tradition going back to the master craftsmen shaping knight armor by hand.

All the parts were then riveted on a steel frame built above the chassis. The latter was perfectly symmetrical, with the double drive pioneered by the PA-I. The two drivers sat in centrally at either end, and had a twin-fold armored shutter and lateral armored shutters.

Access was granted by central doors in the fighting compartment. There was also a provision for four machine guns. These were of the heavy liquid-cooled Schwarzlose MG.08 type, having 6250 rounds. They were mounted in ball-mounts, having some limited elevation/depression and traverse.

They were served by the two gunners. A small cupola could be opened for the commander to direct fire from the roof. The engine was a Skoda, 4 cylinder, 9730 cc, 70 hp, placed in the center, right below the fighting compartment. It gave a maximum top speed, on road, of 70 km/h (44 mph), which was acceptable given the weight of the vehicle. Field performance showed it could ford 1.50 m deep of water, a 30 cm vertical obstacle or cross a trench 45 cm wide.

The suspensions and tires were not ideal for cross-country rides, but at least there was a four wheel drive. The chassis had the serial numbers from NIX58 to NIX69.

An up-armed prototype, the PA-II dělový (cannon) was armed with a 75 mm (2.95 in) delom Škoda L28 gun. At least one prototype was built in 1927, as shown in some rare photos. It was based on the same chassis, but featured a bulkier hull.

When the vehicles were presented to the Czechoslovak army, which had ordered them in 1925, they were tested and eventually refused. They were bulky, heavy and not very agile, with poor ground clearance that forbade off-road rides and an internal fighting compartment that was too cramped. Instead, Skoda sold three of them to Vienna’s police forces in 1927, as a compensation for a batch of OA vz.27 that were never delivered.

The remaining nine were purchased by the Czech police ten years after, actively showcased in parades and exercises in the meantime. Another Skoda armored car, the Obrněný Automobil vz. 27, was instead chosen by the Army for active service. The Austrian vehicles saw action in the repression of the Nazi coup in 1934. At some point, two vehicles were incorporated in the Austrian-Croatian border police force, notably the 16th Company, when the riots erupted.

A number of Czech vehicles were seized and incorporated into the Wehrmacht after 1939, modified to use a radio, as radio relay vehicles. Their operational capabilities were rather limited, but they seem to have been used until 1945.
Dimensions
6 x 2.17 x 2.05 m (19.7×7.12×6.73 ft)

Takom is newer model company based in Hong Kong.

This\ kit comes in a shrink-wrapped tray and lid type box.

The box art shows a PA-II on a rubble-strewn city street., It is in a pattern of patches of blue-grey, tan, green and brown each outlined in black. Ir has a black licwnsew ;plate on the front with the white number NIX-67 on it.  There is a red number 27 outlined in white on the side entry doors. The 7 has a diagonal white slash behind it. Above the 27 is a rectangular manufacturers information plate.

The box art says “Ready to assemble precise model kit. Modeling skill helpful if under 14 years of age, Model may vary from image on box. Cement and paint not included. Static display model. All wheels workable. Front wheels are steerable, 6 types of markings. Can be built as one of four model types.”

One side panel has a color 3-view of the PA-II in the box art scheme. It says it was with an Assault Vehicle Regiment,Milovice,1925-1932,followed by Takom’s  address in Hong Kong, China, the copyright date of 2015, MADE IN CHINA and Takom’s  web address.

The other side panel begins with color illustrations of the parts,followed by box arts of 4 other kits that Takom markets:

No kit numbers for these is shown.
​WHAT’S IN THE BOX:

This kit contains 4 medium-grey parts trees, a medium-grey upper body shell part, a clear tree, black vinyl tires, the decal sheet and the instructions. These re all in a total of 4 self-sealing cello bags.

The assembly instructions consists of a staple bound booklet prinjed on slick coated stock and in full color. It is 5 ¼” x 8 ¼” page format.

The cover has a short history of the PA-II above a profile line drawing of the armored car.

The PE instructions are a waste of time, because there are no PE parts in thiskit.

Between page 9 and 10 is a page that has color box arts of car model kits that Yakom markets:

Page 11 is blank and attached to the back cover. The back cover has a white line drawing of the PA-II showing it’s front and on an all black background.

For all the schemes they are basically built alike. However, in step 8 you cut the machine guns off part no. B16 for the German scheme and step 12 is the assembly of the antenna for the German one,

For all the schemes you opt in step 3 you  opt to add or leave off a bar on the suspension (part no.B1). If added the wheels will not steer. In strp 8 you opt to attach the headlight covers (part no,B11) or not.

The other instructions is for painting and marking . It consists of a single-sheet that is on slick coated stock also. It accordion-folds out into 5 pages in 5 ½” x 8 ¼” page format. It is blank on the back side.

On it’s front side there are 5 marking schemes:

1.      A PA-II in sand-yellow, light-grey light-khaki-green and brown patches each outlined in black. It has a dark manufacturers plate above a red 26 outlined inj white below the triangle all on the side entry doors. A black liucense plate with white 13275 on it is on the front and rear. This is a car with Police Headquarters, Moravsska Ostrava 1937.

2.      A PA-II in the aame colors, but the blotches a little different. It has the dark manufacturers plate above a red 20 outlined in white on the side entry doors. The black license plate on the front and rear has white 13269 on it.

3.      A PA-II also in the same colors and again the blotches slightly different. I has the dark msnufscturers plate above a red 27 outlined in white on the side entry doors. The black license plate on the front and rear has a white nix-67 on it. This is the box art scheme. It os a PA-II with a Assault Vehicle Regement, Milovic 1925-1932.

4.      A PA-II again in the same colors and with the blotches  a little different. It has the dark manufacturers plate above a red 17 outlined in white on the side entry doors. The black license plate on the front and rear has  NIX-10 on it. It is a PA-II in the same unit and years as scheme 3 above and is obviously a fellow car.

5.      A PA-II in over-all Panzer grey with white skeletal German crosses high on the hull sides  and on the front and the rear. It has a banister type aerial on top,. It has a white division logo on the right front fender that I think is a SS unit marking. It is a car with the Wehrmacht, France 1940. I did some research on the net and am pretty sure this PA-II was with the 4th SS Polizie Division.

There are 2 identical  medium-grey letter A parts trees. Each holds: a half of the banister type aerial, half of  a
upper dome part,  a half of the floor, frame parts amd axles etc,(11 parts ach) 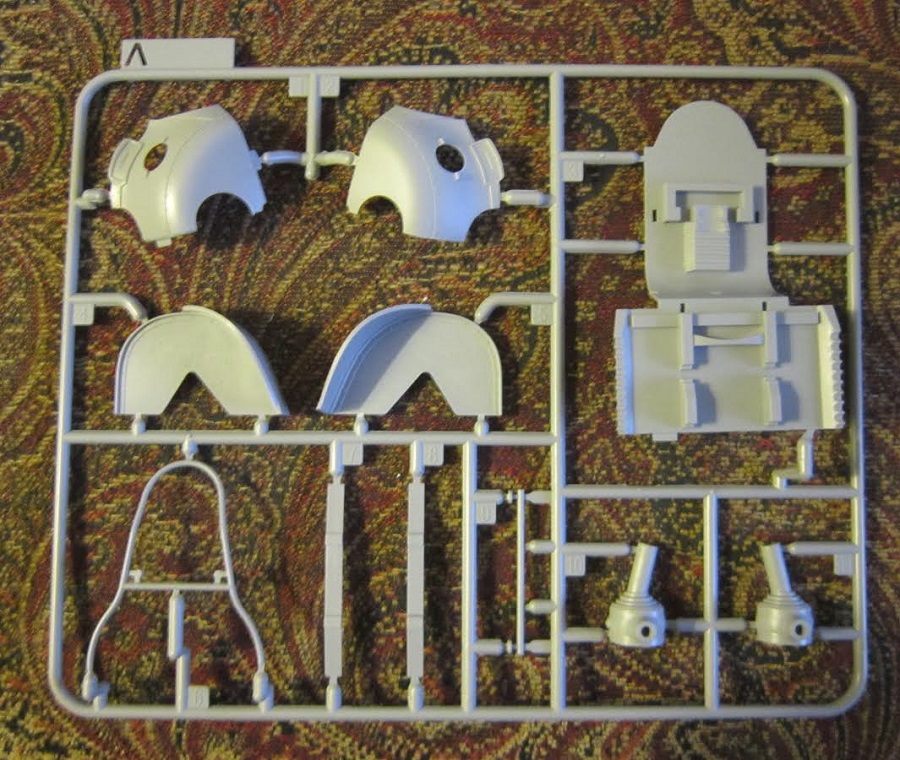 There are 2 identical medium-grey letter B parts trees. Each holds:wheel rims, (42 parts each) 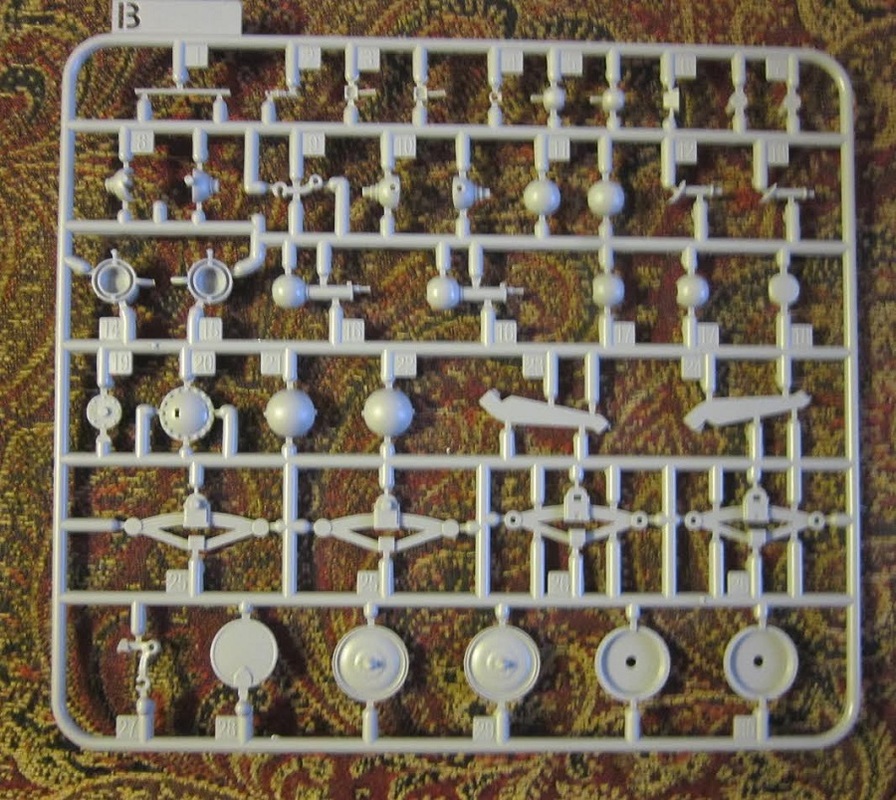 Next is the medium-grey upper body shell. 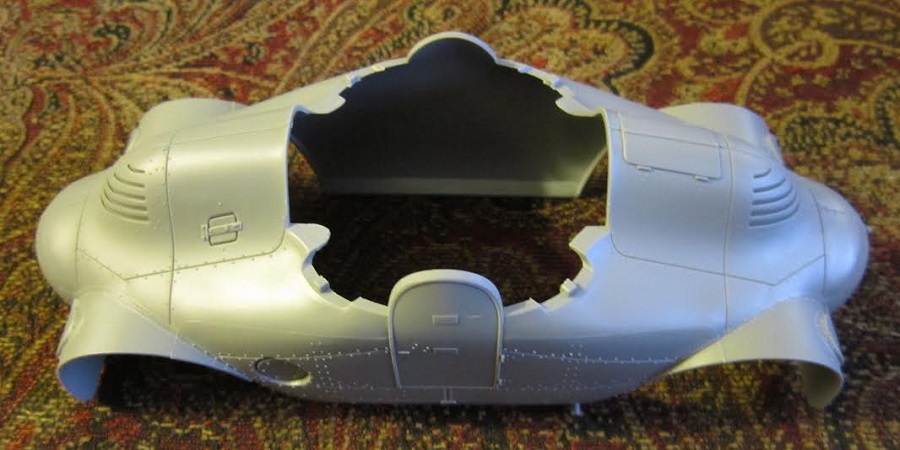 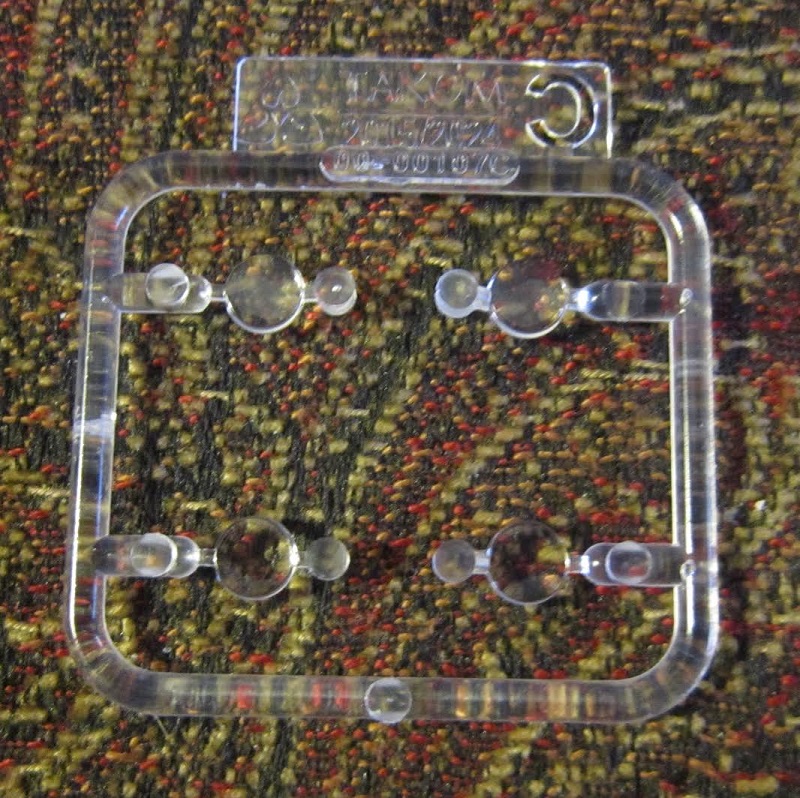 Finally, there are the 4 black vinyl tires 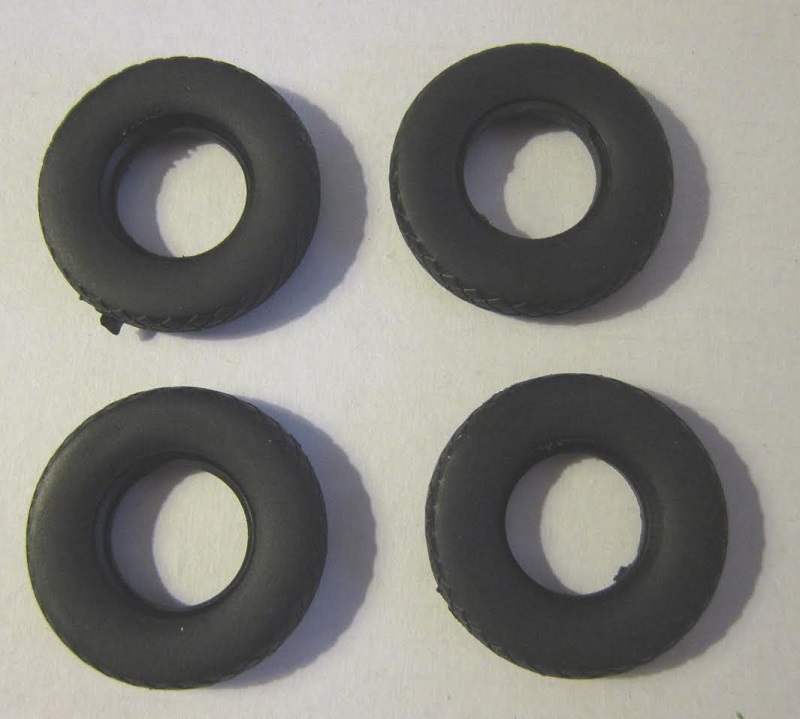 The kit decals for the marking schemes mentioned above. 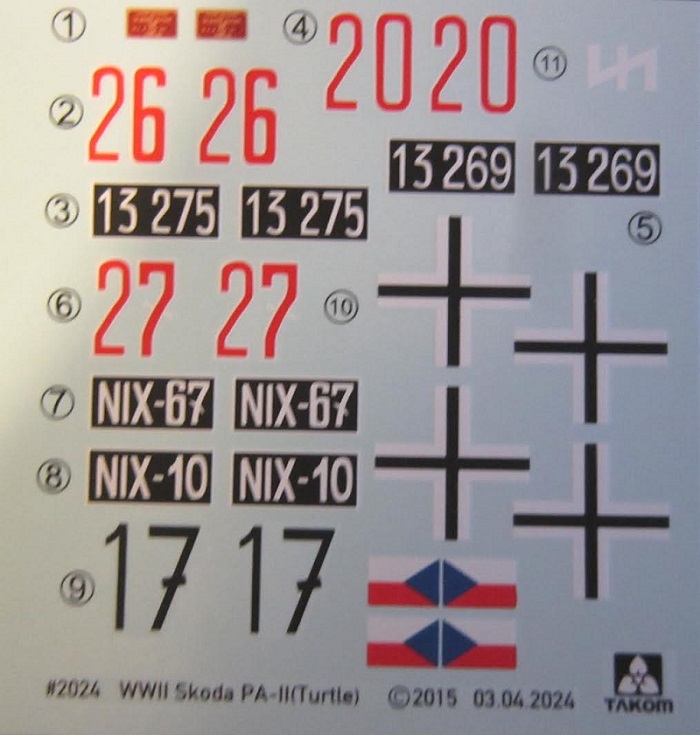 ​I wish the side entry doors were not molded solid, instead of being seperate parts and a figure or two.

I have now assembled this kit. I have to say the fit of parts is not all that good. I got gaps underneath  the bottom edge of the upper DOME part. I filled them with gap filling super glue. Parts have large attachment points to the trees and these points spill over onto the parts and have to be sanded or cut off. Making for extra work. I  also feel that this kit is over-priced. I did not want to do the German version because you are supposed to remove the machine guns.I could not bring myself  to doing that. This means I’m up against trying to do that multi-colored paint job used  on the other 4 marking choices and I’m  not too  sure if I can do it and have it look good….sigh. 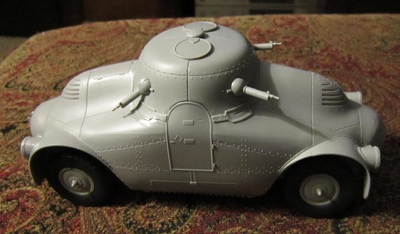 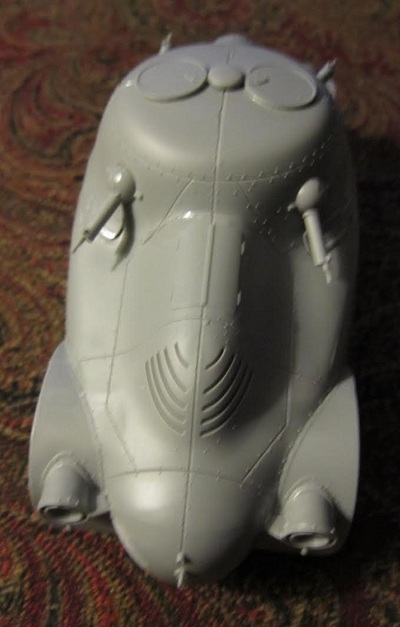 ​This is one salty looking vehicle and it deserves its nick-name of Turtle.

Recommended. Kit was courtesy of my wallet.