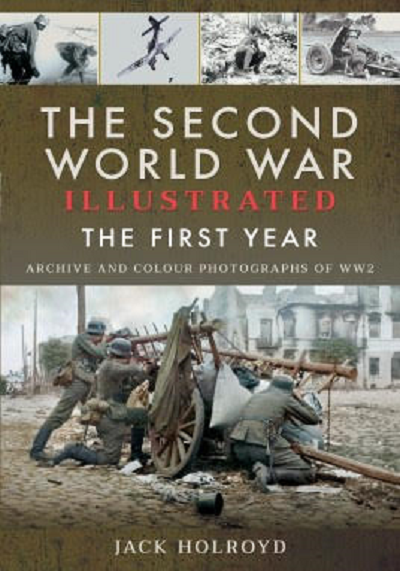 MSRP: $32.95
​This first volume in this new series featuring 1000 photographs from each year of the Second World War covers the contributory factors that led up to the outbreak of hostilities.

Hitler's amazing success in correcting the real and perceived insults to the German nation resulting from the Great War (World War one), and the Treaty of Versailles, is acknowledged.

After this followed a military operation -Blitzkrieg - which rocked the world as two superpowers, France and Great Britain, were soundly thrashed on the battlefield of Europe by Nazi Germany.

With the skin of their teeth, the British Expeditionary Force fled across the channel from Dunkirk, leaving most of their equipment behind.

The invasion of Kent n the south of England by a triumphant enemy equipped with a cruel and oppressive regime replete with Gestapo, concentration camps and policies of racial and political persecution presented a spine-chilling threat to the British people.

With Winston Churchill at the helm disparaging peace treaties with the Nazi regime, the fight back began.

A few thousand fighter pilots of the RAF defeated the Luftwaffe by very narrow margin and Hitler looked to the east for his further bullying of national groups.
In September 1940, the first year of the war ended with Mussolini threatening Egypt and the Suez Canal.

The cover art has 4 black and white photos across the top of German soldiers, a Stuka dive bomber, a child sitting in a pile of rubble and a howitzer. A large black and white photo at the bottom of the cover shows 3 German infantrymen behind a wood cart on a city street.

It is virtual picture album, with every page solid with pictures and captions for them.

Hitler is photographed a whopping 55 times.

Mussolini is photographed 14 times (10 of these times with Hitler).

Hirohito the Emperor of Japan is shown once and the Japanese Prince Kanoe too.

Hitler's top men: Herman Goring is shown 11 times, Rudolf Hess once, Heinrich Himmler once, Ernst Rohm once, Joseph Goebbels once, Reinhard Heydrich once, Martin Bormann once, Gregor Strasser once, Ernst Udet once and Generalfeldmarschall Milch once and Luftwaffe ace Adolf Galland once.

109 photos of German aircraft and 32 of their tanks.

There are 81 photos of ships and submarines.

There are 14 photos of the British evacuation of Dunkirk.

King Leopold of Belgium and 3 photos of Belgian soldiers.

Polish cavalry is shown once, with 15 photos of infantrymen and civilians and one tank and aircraft.

There are 19 photos of French soldiers and officers.

There are 24 maps illustrated in the book, a diagram of the Eben Emael fortress and an illustration of the Italian fascist axe symbol.

The author has been employed in printing and publishing for fifty years. His works include five fictional titles, two books on aviation topics, five further titles on the First World War and one covering the actions of the SS Totenkopf Division in the invasion of France in May 1940.

This is one great picture album and easy reading about the beginning of WWII.
Highly recommended.

I want to thank Casemate Publishers, who sent me this sample and the folks at Pen & Sword.

Casemate is the N. American distributor of Pen & Sword books and all their titles can be seen on the Casemate site at:
https://www.casematepublishers.com/