The P-47 made significant contributions to the outcome of WWII after overcoming early troubles and critics who were horrified at the mammoth proportion of the corpulent fighter.

The "Jug" was eventually the plane that most of the leading American aces made their reputation in; including Lt. Col. F.S. Gabreski (31 victories), Cpt. R.S. Johnson (21 victories) and Col. H. Zemke (20 victories).

Equipped with auxilary tanks, Thunderbolt's were excorting bombing missions in early 1943 that ranged as far as Berlin.

The parts trees fit the tray tight in all 4 directions.

The box art shows 2 P-47's flying above the clouds.

The P-47 in the foreground has the bubbletop canopy. It is OD over grey undercarraige. It has a red cowling and rudder flap. There are black and white D-Day Invasion stripes around the fuselage and wings. It has the white fuselage code of HV (star with bars) A and yellow serial no. 226418 on the rudder sides. There are 20 victory score marks over Luftwaffe aircraft under the canopy on the side.

This the aircraft of Col. Francis S. Gabreski. No unit is mentioned.

The P-47 with the razorback canopy is overall OD above grey undercarraige also. It has the yellow name ZOMBIE on the sides of the cowling and the white fuselage code of QI (star with bars) C and a white stripe around the rudder and the elevators. It carries the serial no. in yellow of 276594 on the rudder.

It is Lt. Thomas Bailey's aircraft. Again, no unit is mentioned.

This kit holds 2 off white trees of parts that fit the tray tight in all 4 directions. The clear parts, decal and instructions complete the kits contents.

Part trees are not cello bagged. They are no alphabetized and there are no parts trees illustrations in the instructions.

The instructions consist of a single sheet that is printed on both sides in 8 1/2" x 11" page format, folded twice to fit the box.

The face side of the instructions begins with READ THIS BEFORE YOU BEGIN instructions over an exploded drawing for assembling the fuselage, wings canopy, radio antenna, pilot, seat, elevators and the wing guns. It is accompanied by a lot of text to walk modelers through the build.

The other side of the sheet has another exploded drawing for assembly of the propeller, cowling, motor, landing gear, drop tanks, bombs etc. Again, accompanied by a lot of text.
The bottom of the page has two 3-views for the 2 schemes included in the kit. (Both described above already). 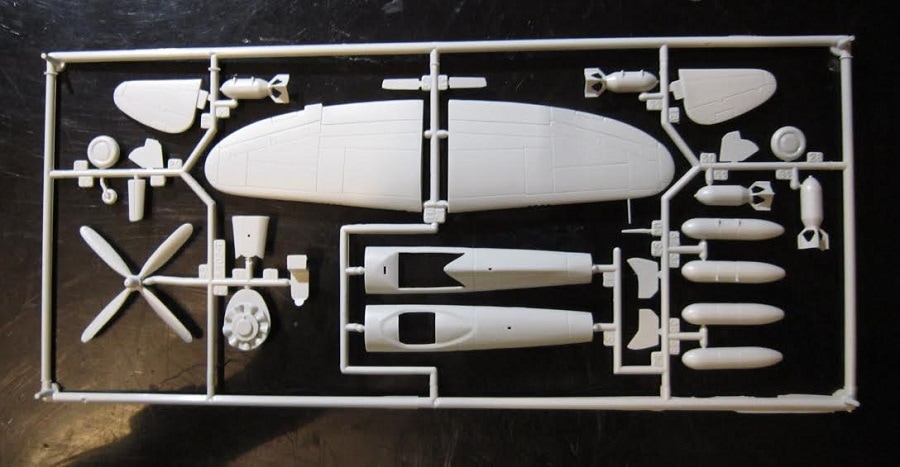 ​The clear parts tree holds: the display stand parts and a  bubble top and razorback type canopy (both can be posed open or shut) (6 parts)

Operating surfaces are molded solid and the panel lines are of the raised variety. There are number tabs next to the parts on the trees. 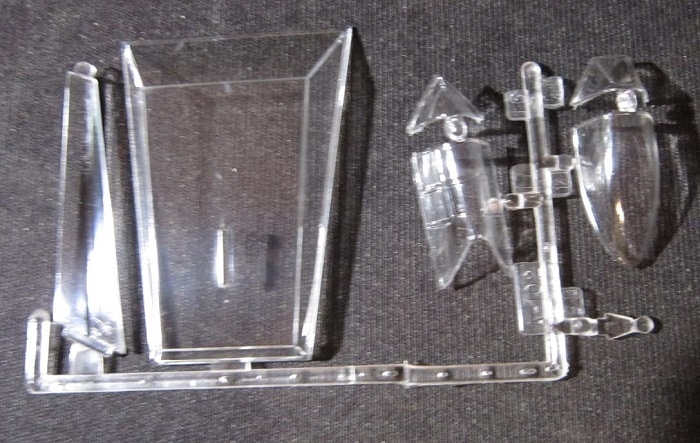 This is a neat 30 year old kit of a popular U.S. fighter.

Recommended.
​I paid $2.06 for this kit back then. I am willing to sell it for a reasonable offer.