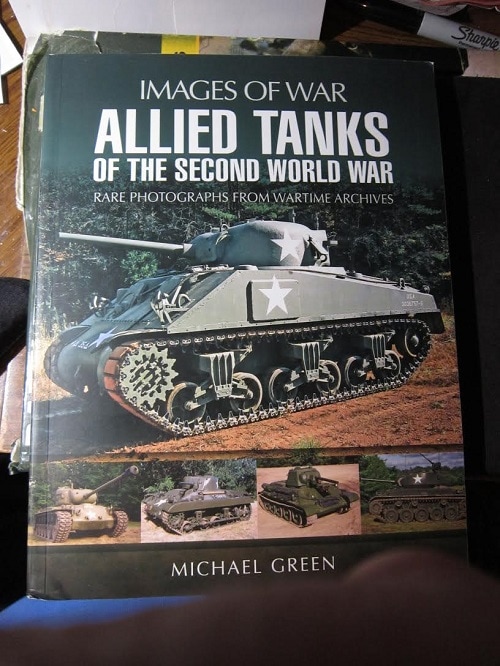 Pen & Sword Books LTD is located in the U.K.

The expert author Michael Green has compiled a full inventory of the tanks developed and deployed by the Allied armies during the six year war against Nazi Germany and her Axis partners.

There were four catagories of tanks: light, medium, heavy and super-heavy. Combat experience proved light tanks (such as the Stuart and T-26) to be ineffective. Medium tanks (the U.S. M4 series, named Sherman by the British, and the Russian T-34) soon dominated with their fire power, production and mobility.

The later stages of the war required the Allies to answer the Axis Panther and Tiger tanks with up-gunned and up-armored second generation M4's, T-34/85's and the Sherman Firefly. Totally new heavy tanks such as the M-26 Pershing, Soviet KV-1 series and the British Centurion only saw action in the final months of the war.

Allied Tanks of the Second World War covers all these catagories in detail as well as the few super heavy tanks such as the French Char 2C and the TOG. For an informed and highly illustrated work the book has no comparable rival.

This new book contains 149 color photos (counting the ones on the cover too). There are 118 black and white photos.

At the back of the book there is 6 blank pages labeled at the top "NOTES".

The first chapter is Light Tanks. It contains photos of:

The second chapter is Early War Medium Tanks. It contains photos of:

The third chapter is Late War Medium Tanks. It contains photos of:

The fourth chapter is Heavy Tanks. It contains photos of:

This is a very detailed and illustrated book that will be of great interest to modelers and military historians alike.