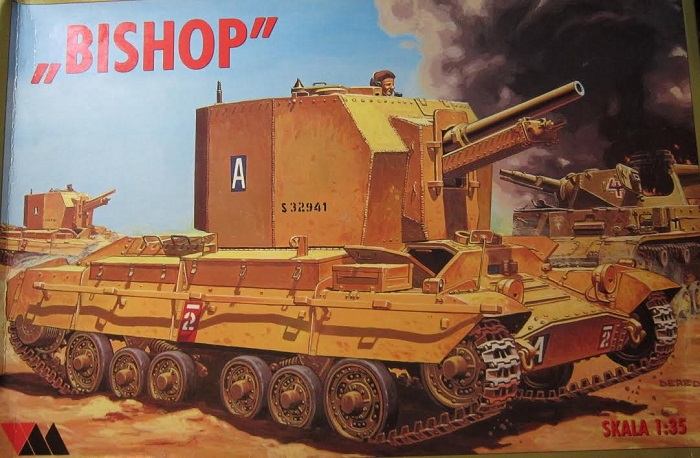 The Bishop was the nickname of a British self-propelled artillery vehicle based on the Valentine tank, armed with the 25 pounder gun-howitzer, which could fire an 87.6 mm (3.45 in) 11.5 kg (25 lb) HE shell or an armour-piercing shell. A result of a rushed attempt to create a self-propelled gun, the vehicle had numerous problems, was produced in limited numbers and was soon replaced by better designs.

The rapid manoeuvre warfare practiced in the North African Campaign led to a requirement for a self-propelled artillery vehicle armed with the 25-pounder gun-howitzer. In June 1941 the development was entrusted to the Birmingham Railway Carriage and Wagon Company. A prototype was ready for trials by August and 100 were ordered by November 1941. The result was a vehicle with the formal title: "Ordnance QF 25-pdr on Carrier Valentine 25-pdr Mk 1".
The vehicle was based on the Valentine II hull, with the turret replaced by a fixed boxy superstructure with large rear doors. It was nicknamed the "Bishop" for its high mitre-like superstructure.

Into this superstructure the 25-pounder gun-howitzer was fitted. As a consequence of the gun mounting the resulting vehicle had very high silhouette, which is a disadvantage in desert warfare. The maximum elevation for the gun was limited to 15 degrees, reducing the range to 6,400 yards (5,900 m), about half that of the same gun on a wheeled carriage. The maximum depression was 5 degrees, traverse was 8 degrees, and the vehicle could also carry a Bren light machine gun. By July 1942 80 Bishops had been built; as the last 20 were being built an order for a further 50 was placed, with an option for a further 200 but the tender was abandoned in favour of the American M7 105 mm SP howitzer, named "Priest" in British service.

The Bishop first saw action during the Second Battle of El Alamein in North Africa and remained in service during the early part of the Italian Campaign. Due to its limitations and the Valentine's characteristic slow speed, the Bishop was poorly received. To increase range, crews would build large earthen ramps and run the Bishop onto them, tilting the vehicle back to increase the elevation. The Bishop was replaced by the M7 Priest (105 mm) and Sexton (25-pounder) when those became available in sufficient numbers and surviving Bishops were diverted for training in self-propelled gun tactics.

A British self-propelled gun armed with the Ordnance QF 25-pounder in design from 1941 was nicknamed "the Bishop" as its appearance was said to resemble a bishop's mitre. A replacement, the US 105 Millimeter Howitzer Motor Carriage M7 was called "the Priest" by the British, as part of its superstructure was said to resemble a priest's pulpit. Following this line of names a 1942 self-propelled gun armed with the QF 6 pounder was named "the Deacon", and a 1943 carrier weapon with the QF 25-pounder was called "the Sexton".

Mirage is a company based in Warsaw, Poland.

The box art shows 2 Bishop's passing a burning knocked-out German tank. The Bishop in the lead has a black rectangle with a white letter A on it on the sides of the turret. A red rectangle with a white horizontal bar over a white number 2 is on the side skirts. This number 2 is repeated on the right side of the nose and the letter A insignia is on the left. A black serial number S32941 is also on the sides of the turret.

Visible on the 2nd Bishop is the same letter A insignia on it's turret sides and the black serial number S32940.

Side panels repeat the box art smaller and in color, followed by the statement that the kit is suitable for ages 6 to adult, it contains decals and instructions for assembly, but paints and plastic adhesive are not included. This is said in German, English and Polish, each labeled with color illustration of the flag of the country that speaks that language. The copyright date is given as 1996 and the kit was made in Russia.
​WHAT'S IN THE BOX:

The kit contains 5 dark green parts trees and 2 black trees all in a sealed cello bag. The decal sheet and instructions complete the contents.

There is no clear parts tree.

The instructions consist of a single sheet that is folded in the center to create 4 pages in 8 1/2" x 11 1/2" page format. It is printed on tan poor-quality newsprint type paper.

Page 1 of the instructions begins with a black and white repeat of the box art, followed by the history of the Bishop in Polish and a 2-view illustration of the box art scheme over the first 3 assembly steps that are called out in Roman numerals.

Page 2 & 3 give a grand total of 15 assembly steps. All called out in Roman numerals.

There are no parts trees illustrations in the instructions. The trees are not alphabetized, but have part numbers on tabs next to the parts. This means extra careful study is needed to get the correct parts for each assembly. Bad move Mirage ! 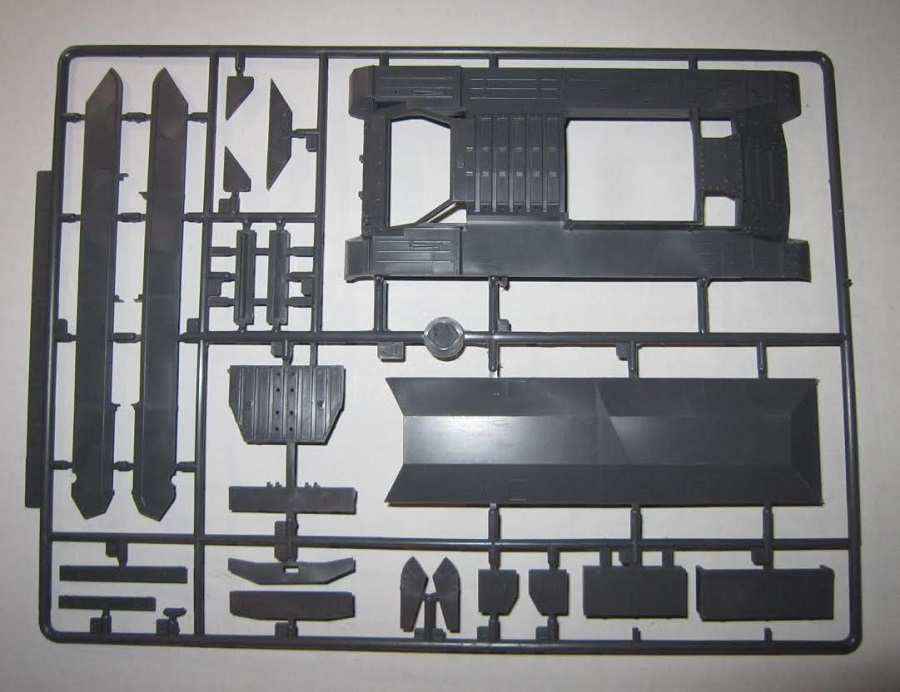 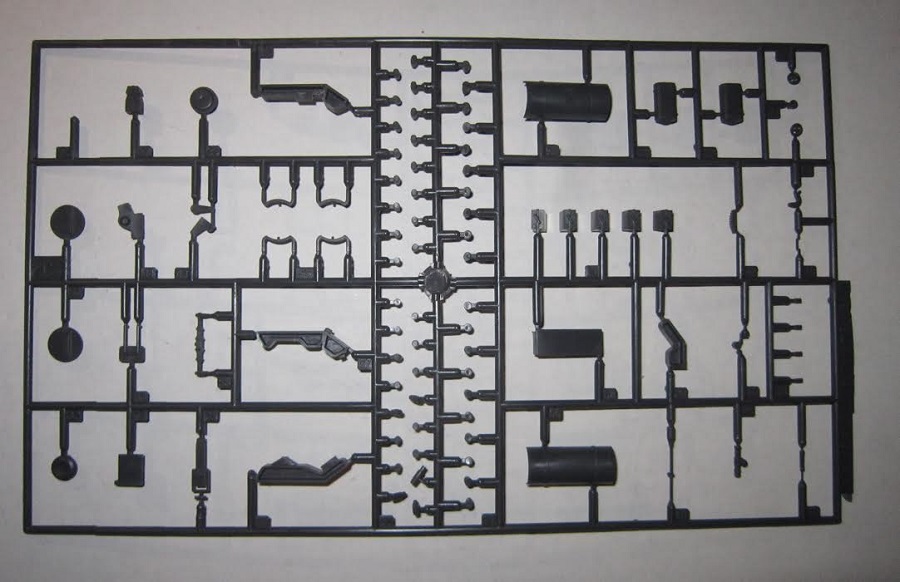 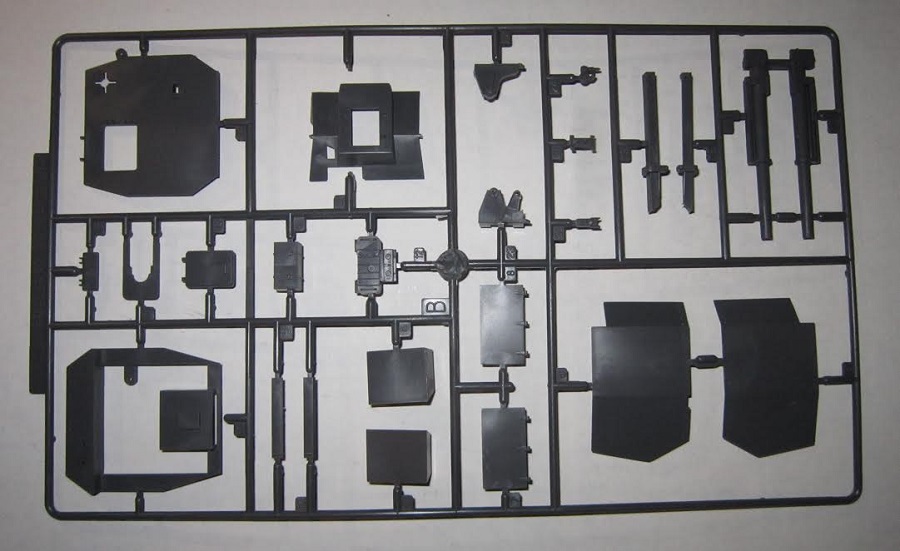 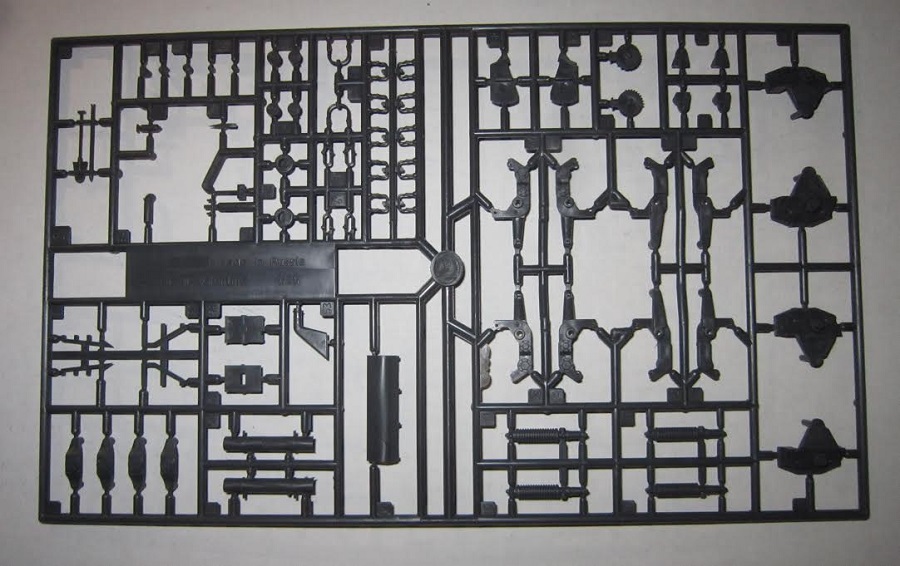 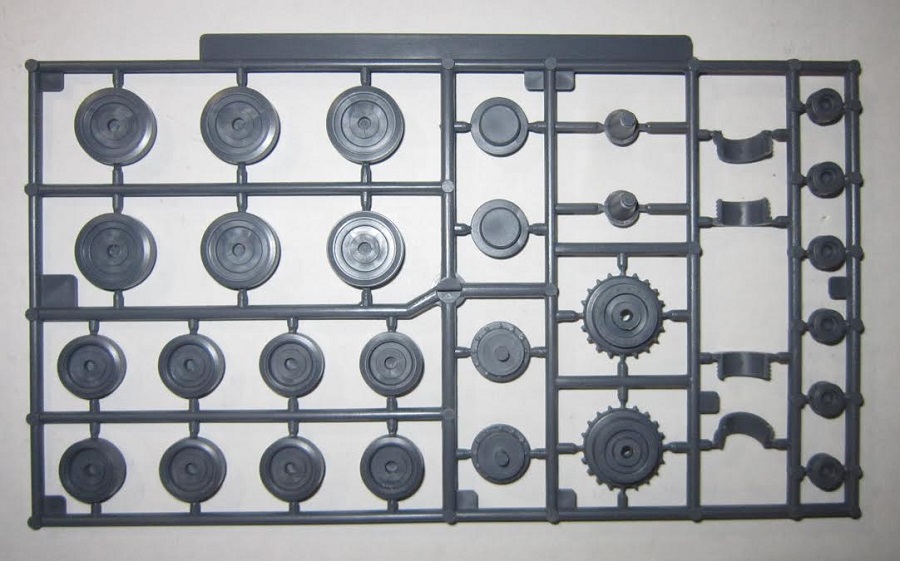 ​There are 2 identical black parts trees that hold the individual track links (120 links per tree) These links are rather SMALL and look more like they're for a 1/72nd scale model, rather than 1/35th. 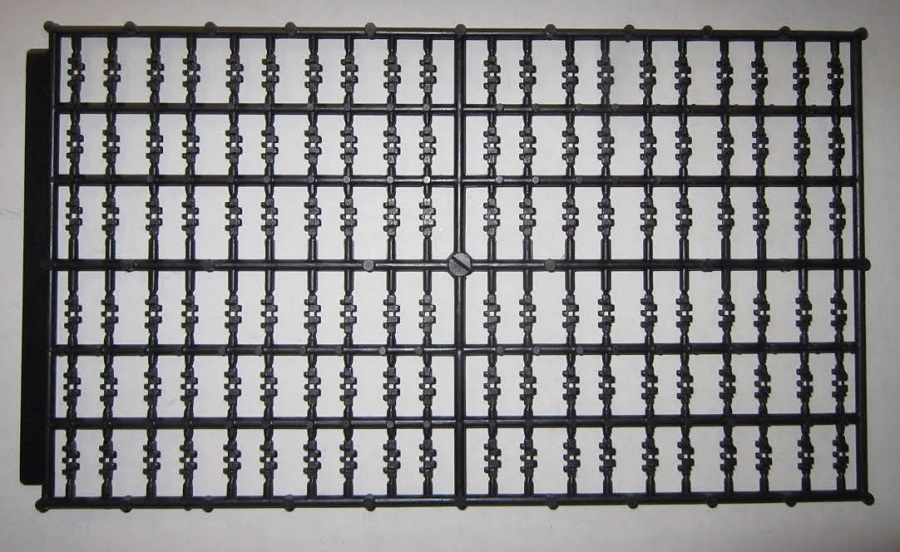 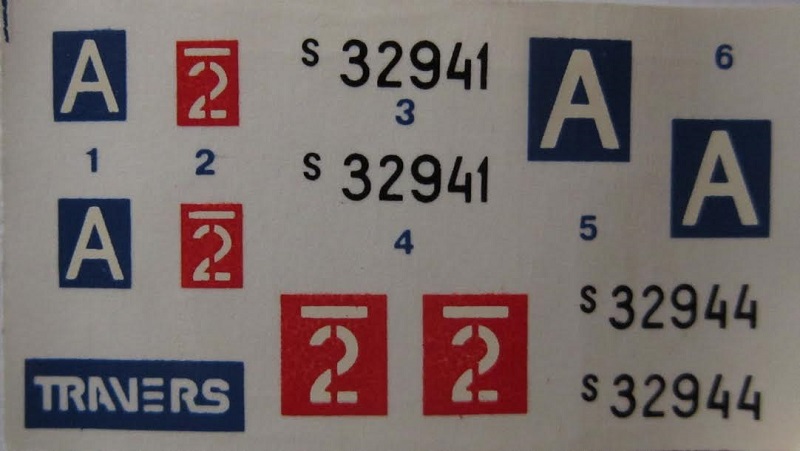 There is a lot of nice turret interior detail that can be viewed if you leave the 2 rear turret doors open.

This is a nice older kit and recommended.
I paid $20.98 for this kit back in the 90's at my local hobby shop according to the price tag that is still on the end of the box.