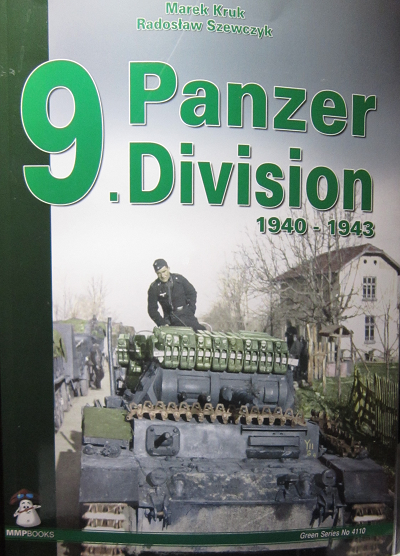 The unit was formed in January 1940 from the 4th Leichte-Division. It took part in the campaign in the west, fighting in the Netherlands, Belgium and finally France, before being transferred to Poland in September 1940.

Later it took part in the campaign in the Balkans before fighting on the southern sector during the invasion of the USSR. It then transferred to the central sector in October 1941 and took part in the summer offensive of 1942 and later in the fighting at Kursk.

Subsequently, the unit transferred to the southern sector in the fall of 1943 and took part in the fighting at the Dnieper where it suffered heavy losses.

Mushroom Model Publications (MMP) is based in the UK. All there books are printed by their partner Stratus in Sandomierz, Poland in the English language. Stratus also does their own line of books in Polish.

The cover shows a head on photo of a Pz.Kpfw. III Ausf. F during the march through Romania. Additional fuel canisters are stored on the turret. Some spare track links are affixed in front of the turret, only for the duration of the journey. In a combat situation they would prevent the turret from turning.

This photo appears inside the book again in black and white. It has been obviously colorized for the cover.

The back cover has a one-paragraph history of the unit at the top, over a repeat of one of the color profiles inside the book of a Pz.Kpfw. IV Ausf. H and 4 cover-arts of MMP’s Warpaint Colours & Markings of British Army Vehicles 1903 – 2003, volumes 1, 2, 3 and 4.and MMP’s web address at the bottom.

I want to thank Roger Wallsgrove, Head Editor of MMP and the folks at Stratus for this review sample.

All MMP book titles can be viewed on their web site at:
www.mmpbooks.biz