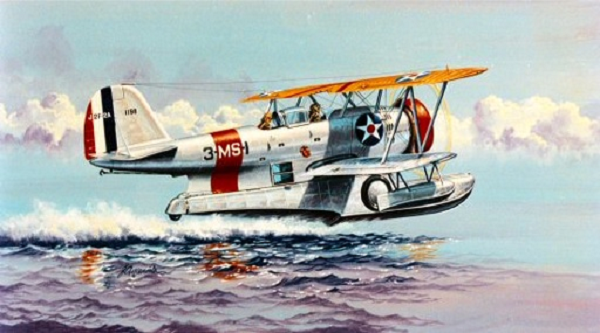 The versatility of Grumman's awkward-looking J2F reconnaissance plane more than made up for its ungainly appearance. Initially flown in mid-1933, the lumbering biplane proved to be sturdy and reliable during more than 2 decades of operational service. Called the Duck, it was designed to be catapulted from naval ships and serve as a ship-to-shore courier.

During WWII, the Duck was assigned scouting and air-sea rescue missions in the Navy, Marines and Coast Guard. It was in the latter role that its strength and durability made it popular with not only its own crewmen, but especially the downed airmen fortunate enough to be rescued by the Duck's diligent crew.
Because of the rugged metal construction of the hull,

the Duck could survive severe pounding by the rough seas, and in one instance the plane was lifted by a wave and literally hurled over a reef, after which it successfully took off and returned to its ship.

In 1937, Argentina received the first of a dozen of the Grumman amphibian. The early models were of the JF series, and in 1939 they acquired the J2F model depicted in this kit. These planes served through the Second World War and were still in use during the Argentine revolution in 1955, more than twenty years after they began military service.

Glencoe is a model company based in Northboro, MA.

This kit comes in blousey shrink-wrapped tray and lid type box. The box is 4" too long a over a inch too wide, making a letter "L" void around the parts.

The box art shows a Duck taking off of the ocean. It is overall bare metal, with a red cowling and fuselage band. It has red, white and blue vertical bars on the rudder flap with the serial no. J2F-2A on the bars and a black no. 1198 on the rudder.

The fuselage code is a black 3- white MS and black -I. The white letters are over the red fuselage band. It has a large white U.S. star with a red center on a blue circle on the sides of the nose and a chrome-yellow top of the upper wings and the leading edges of the lower wings.

One side panel shows 2 color box arts of other Glencoe aircraft kits: the Spirit of St. Lois and a McDonnell XV-1 Convertiplane. No kit numbers or scale is given for these 2.

This is followed by a statement of Glencoe's liability concerning the kit, over the copyright date of 1988 and MADE IN THE USA.

The other side panel has a small color repeat of the box art, followed by a one-paragraph history of the Duck, over the statement that the kit has markings for the U.S. Marine Corps., U.S. Navy at Pearl Harbor and the Argentine Navy.
​WHAT'S IN THE BOX:

Originally in this kit there was just one medium-gray tree with all the Ducks parts on it other than the clear canopy part. However, this tree has been hacked up into over a dozen pieces. It shows it complete in the parts tree illustration in the instructions.

Parts are all in a sealed cello bag. The clear canopy, decal sheet and instructions complete the kit's contents. 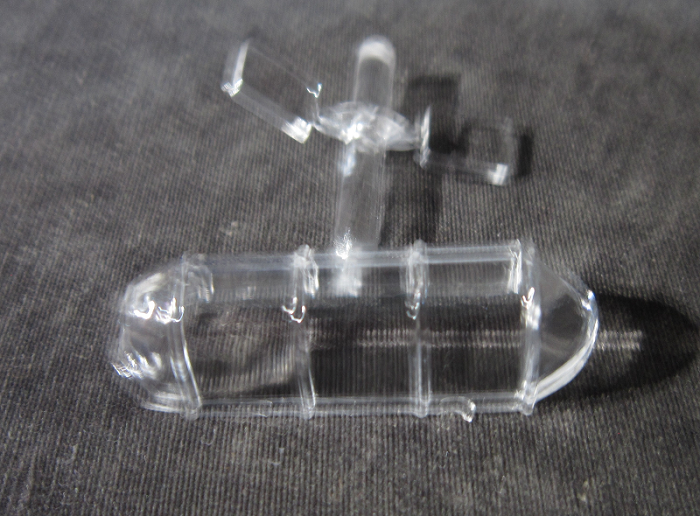 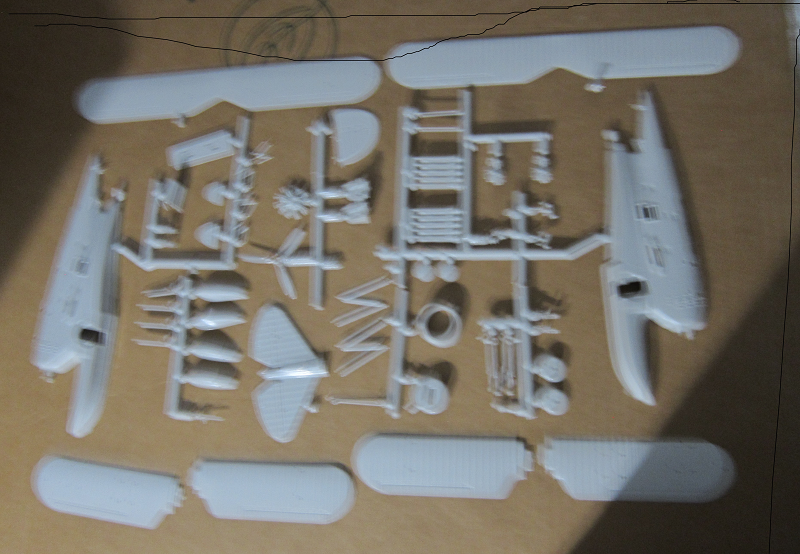 I took a picture of the part tree shown whole in the instructions. So, readers can see what is on it. 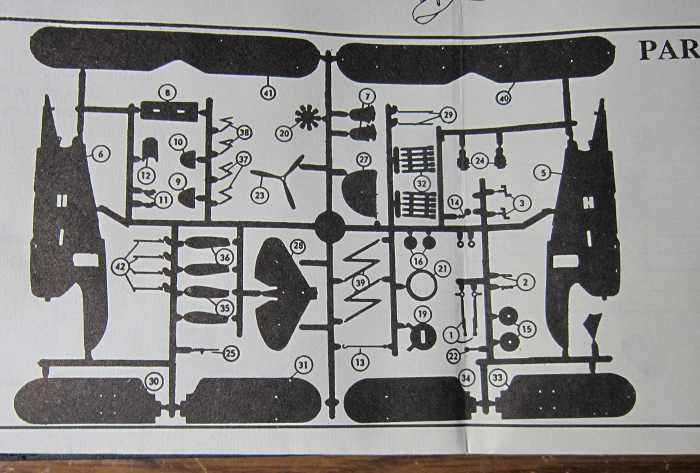 ​The instructions consist of a single sheet printed on both sides in 17 " x 11" page format.

The face side begins with a black and white repeat of the box art, with the history of the Duck to the right of it. Glencoe's address in Northboro, MA is shown, along with a suggested color listing and international assembly symbol explanations. At the bottom there are the first 3 assembly steps.

The reverse side of the sheet gives the 4th and last assembly step, above the part tree illustration and 3 schemes for the Duck:

2. A Duck with the U.S. Navy Utility Sqdn. 1, Pearl Harbor. Is overall silver with a willow-green rudder and the black fuselage number I-J-23 and white serial no. 0793 and J2F-2 on the rudder and black U.S. NAVY below the elevators.

3. A Duck with the Argentine Navy. It is overall silver with a rudder divided horizontally with a blue, white and blue band with a yellow logo on the white band. It has the fuselage number in black of 3-0-5 and black anchor insignia above the upper wings and below the lower wings.

Sheet is folded twice to fit the box.

There is no pilot figure in the box. Flaps are all molded solid as well as the cockpit canopy. Nice raised rib detail.