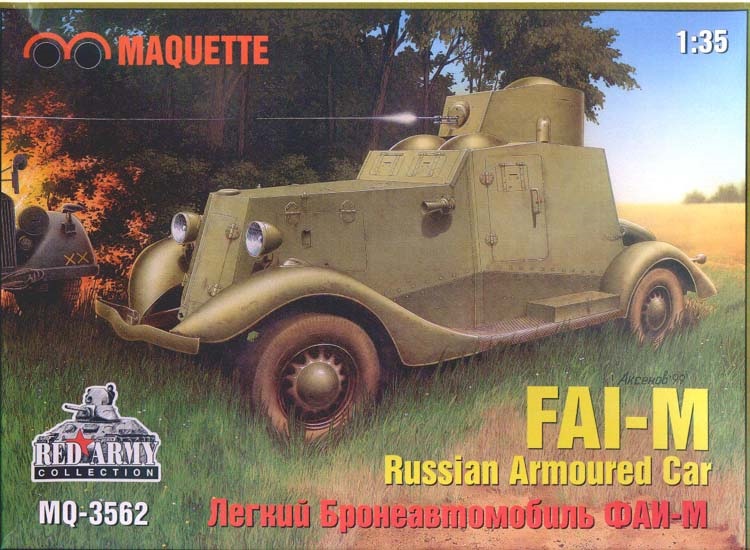 The FAI (Ford-A Izhorsky) armored car was a replacement for the D-8 armored car, used by the Soviet Union from the early 1930’s to early 1940’s.

The FAI was built on the chassis of the GAZ-A car, a licensed copy of the U.S. Ford model A. This chassis was the major weakness of the FAI. Car chasses were not powerful enough to move a useful amount of armor or firepower on the battlefield. Armored cars based on car chassis were roadbound, thinly-armored and lightly armed. The FAI was a typical example of this class of vehicle, with a single 7.62mm DT machine-gun in a revolving turret. The armor was sufficient to stop most shell fragments and small arms fire, but could not withstand any kind of cannon or heavy machine-gun fire. It was also very vulnerable to mines.

The FAI was built in relatively small numbers, before being replaced by the very similar BA-20. The early BA-20 had the same vertically-sided turret as the FAI. FAIs were employed in the early days of fighting on the Eastern Front in WWII.

The FAI and BA-20 series had a few advanced features. They were all-welded construction in an era when few AFVs were welded. Also, they had cork-filled tires to enable them to retain mobility even if the tires were penetrated.

The FAI and BA-20 are often mistaken for each other. The main recognition feature of the FAI is the two dome-shaped armored covers over the driver and co-driver’s stations. The BA-20 had a flat armored roof in this area instead.

Ordinary rear-wheel drive car chassis gave Soviet armored cars of the 1930’s poor cross-country ability, which limited them to use on roads. A lot of them were similar in appearance. The FAI-M used a licensed American Ford model A chassis. It had the longer wheelbase GAZ-M1 chassis, which made it look as if the hull was too short for the chassis. This hull was later fitted with a longer hull to produce the BA-20 type armored cars.

Maquette is a model company based in Moscow, Russia

This kit came in a shrink-wrapped tray and lid type box. The box art shows a FAI-M parked in a woods and firing it’s machine gun. It is in overall light green and shows no markings. There is the nose of a German truck in the background, but not enough of it is shown to make out what it is. It has double yellow letter X on the front fender below the notek lamp. This is the division marking for the 6 th Panzer Division from 1941 till the end of the war.

Inside the box is a large medium green tree of parts, a large black tree and two small white trees. There are no decals in the kit. The instructions complete the contents.

The instructions consist of a single sheet printed on both sides of 8 ¼” x 11 5/8” format.

The face side of the sheet begins with the history of the FAI-M in Russian and English. This is followed by the parts tree illustrations. There are a lot of parts X’d out on the letter B tree drawing as being excess and not needed to complete the kit. This tree was a borrowed from a Part brand kit of the BA-20. A whopping 24 parts are deleted on the tree. Maquette provides the necessary parts to backdate the vehicle into the FAI-M.

The bottom of the page has the first 2 assembly step drawings.

The reverse side of the instruction sheet has the balance of a total of 7 assembly steps. Step number 3 says that the outside of all the body parts should be green (FS34151) and step 5 calls out the interior as being white. Also, in step 5 we are shown to remove curved indented areas of the body sides (D1 & D2) before fitting them to the bottom hull/fenders part. The bottom of the page has a listing of 8 colors. These are marked with a illustration of the head of a paintbrush and a number. These symbols are throughout the assembly steps to tell you what to paint various items.

The parts trees have no part numbers molded on them. This means constant referral to the parts trees illustrations to find the part that you need for various assemblies. Bad move Maquette!!

The large Black parts tree is labeled as letter A tree on the parts tree illustrations. It holds: wheels, frame, steering wheel, engine parts, suspension parts, exhaust pipe with muffler, drive shaft, radiator, leaf springs, front fender, hub caps etc. (45 parts) There are no clear parts in the kit. Instead, the headlight lenses are on this black tree and molded solid. I bought some M.V..Products brand light lenses,. Set no. LS 11 to take care of this problem. 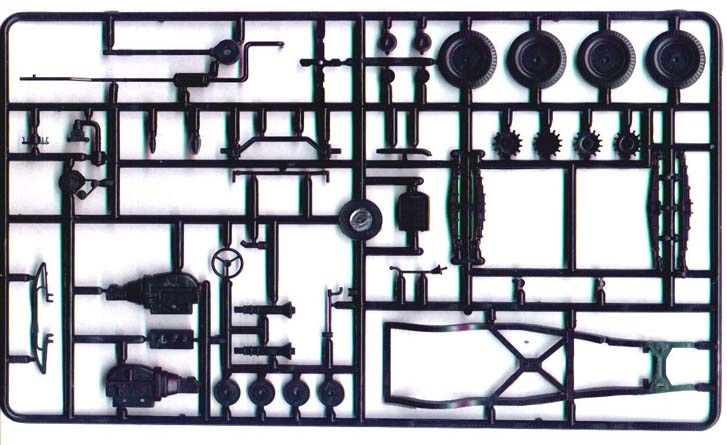 The large medium green parts tree is labeled as letter B on the parts trees illustrations. It holds the vehicle’s floor/fenders part, seats, gas tank, upper body parts for a BA-20 version (most not used), spare tire, machine-gun, tow hooks etc. (40 parts) As mentioned above, 24 parts are not used. 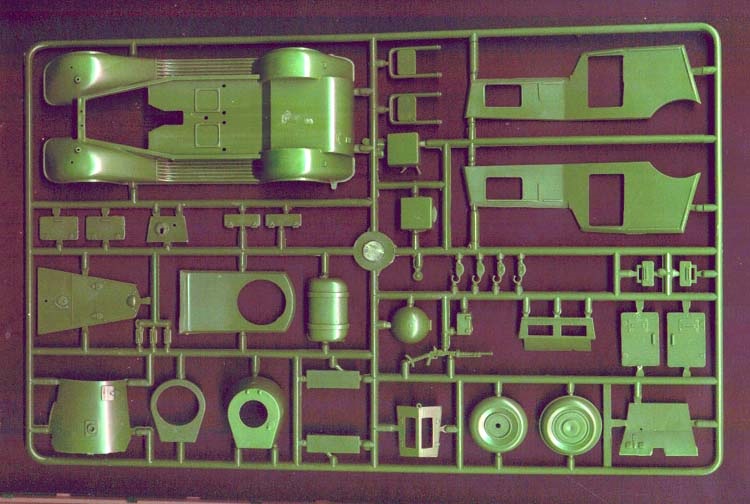 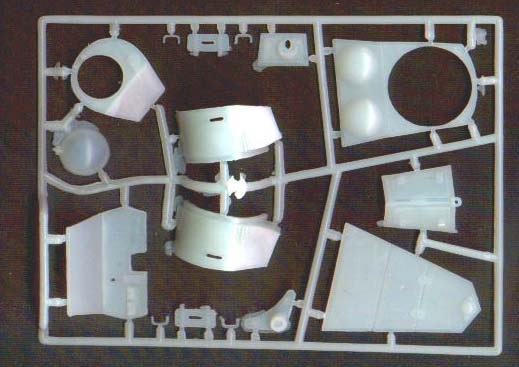 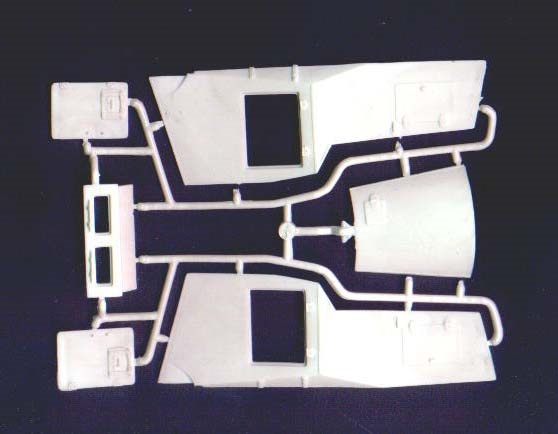 There is a nice engine in the kit, that would only need some wiring and plumbing added to satisfy those of us with AMS. Surgery will be needed on the hood parts to see this however. There is some nice detail inside the driver’s compartment, but a little more is needed inside to really detail it out. A person would have to find some references as to what it looked like inside a real FAI-M. Information that may be hard as hen’s teeth to find perhaps.

Most Russian AFV’s I have seen pictures of are usually unmarked except for an occasional patriotic slogan. So, the lack of decals in the kit is not such a big deal.

There are no crew figures in the kit. This is a neat kit of an Soviet armoured car. Highly recommended.