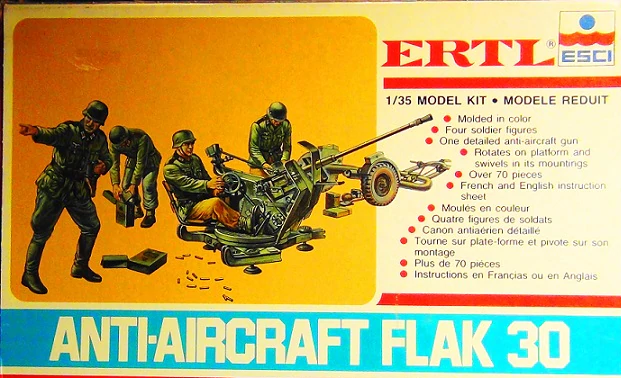 I paid a whopping $2.80 for this kit at the Ertl factory discount store in Dyersville, IA back in the 80's.
​HISTORY:

The Flak 30 (Flugabwehrkanone 30) and improved Flak 38 were 20 mm anti-aircraft guns used by various German forces throughout World War II.
It was not only the primary German light anti-aircraft gun, but by far the most numerously produced German artillery piece throughout the war.

It was produced in a variety of models, notably the Flakvierling 38 which combined four Flak 38 autocannons onto a single carriage.

Ertl was a company based in Dyersville, IA. Years ago they started making metal farm toys (tractors, plows, combines etc.). Later they sold plastic model kits made by Esci in Italy. Both companies have gone out of business.

This kit came in a shrink-wrapped end-opening type box. I am no fan of this type of box, because invariably parts or the decal sheet will find their way past one of the end flaps to become lost forever.

The box art shows the gun and a 4 man crew posed against a yellow background.

The gun is off it's carriage and is overall panzer grey. The crewmen all wear field grey uniforms with steel helmets.

On the left is an officer pointing with his right arm and holding a pair of binoculars in his left hand. He has jodhpur type pants over black jack boots.

Behind the gun is a crewman bent over unloading ammo from a steel case.

Seated on the gun is a crewman operating the elevation wheel.

The fourth crewman is loading an ammo clip into the gun.

All the crewmen have their pants bloused into low shoes.

There are some empty ammo containers and spent shells laying around the gun.

To the right on the box art is a list of the kit's features: Molded in color, four soldier figures, one detailed anti-aircraft gun, rotates on platform and swivels in its mountings, over 70 pieces, French and English instruction sheet. This is said in French and English.

Both side panels say packaged and printed in the USA, made in Italy by Esci for the Ertl Company in Dyersville, IA USA and Kidde Recreation Products in Ontario, Canada is mentioned.

This is followed by 2 color photos of the model made up. One shows the gun and the operator seated on it. The second one shows him again with the crewman behind the gun unloading rounds from a container.

The kit holds 2 tan trees in a stapled-shut clear cello bag and the instructions.

The instructions consists of a staple-bound booklet of 8 pages in 7 1/2" x 9" page format.

Page 1 begins with a wartime black and white photo of the gun and crew, set up on a street on it's carriage. It looks to be somewhere in France because there are French signs shown. The gun has a canvas cover over it.

The bottom of the page has the gun's specifications in 5 languages, including English and international assemby symbol explanations.

Page 2 is the figure's assemblies instructions.

Page 3 through 8 gives a grand total of 10 assembly steps for the gun and trailer.

The bottom of page 8 says the kit was made in Italy by Esci for Ertl and gives Ertl's address in Dyersville, IA. Ertl was a subsidiary of Kidde Inc. in the 80's. Printing was done in the USA. 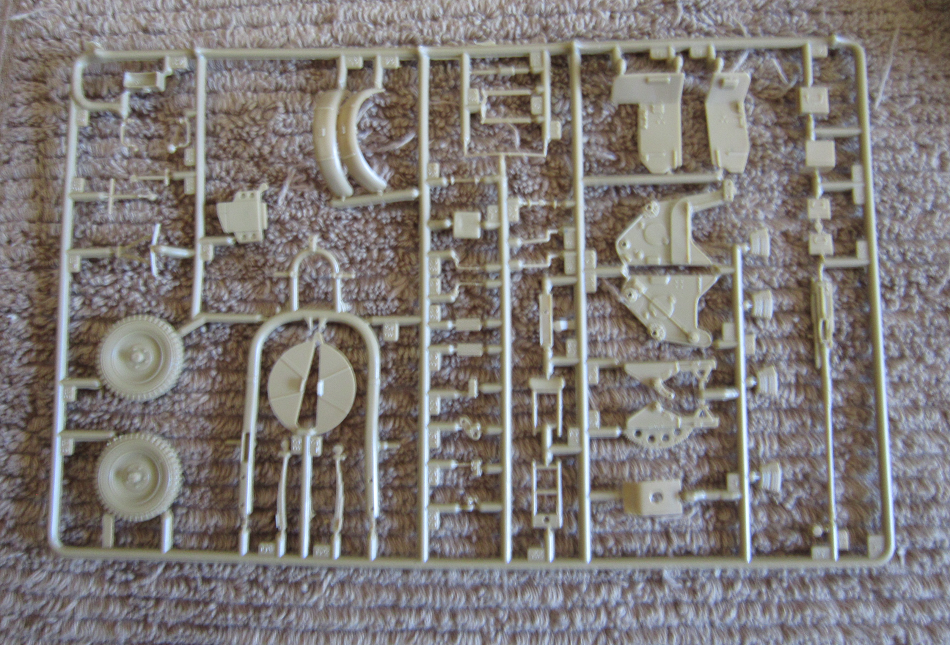 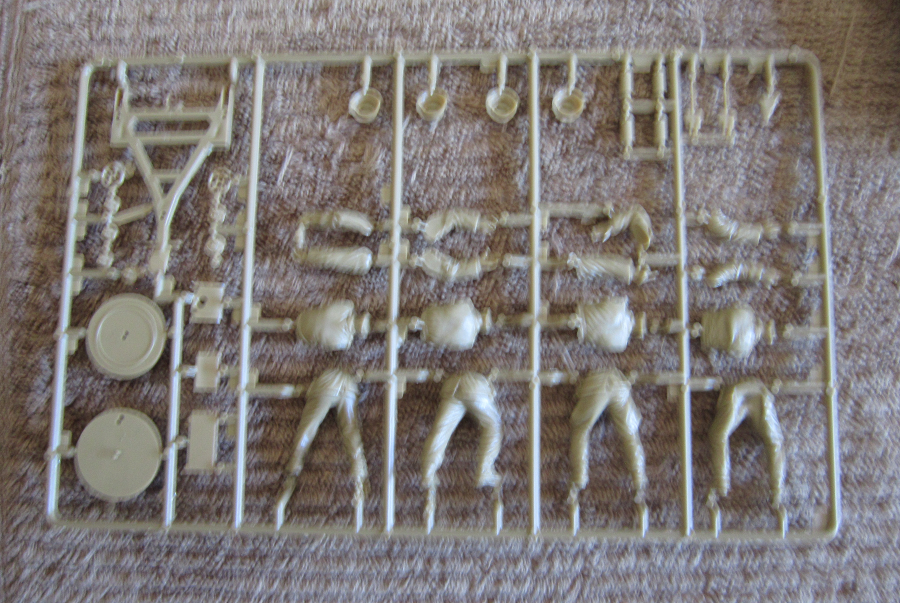 ​Figures are divided into upper and lower bodies and seperate arms.

There are no decals in the kit. I have only ever seen kill marks sometimes on the shields of German guns anyway.
​Highly recommended.