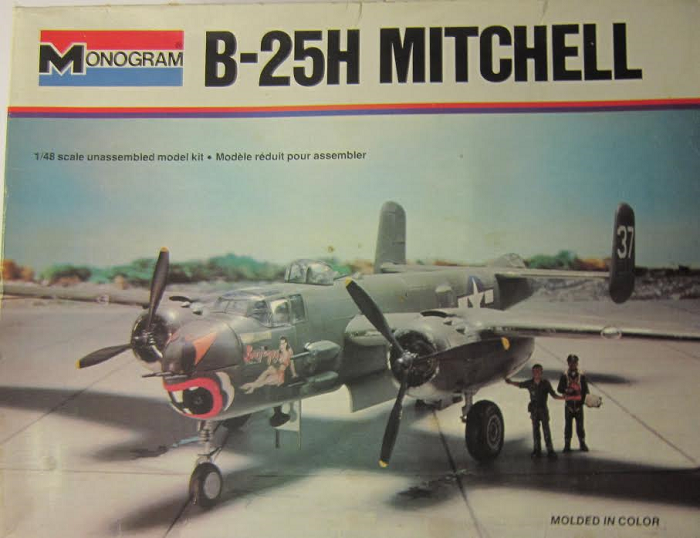 Kit no. 5500
By Ray Mehlberger
OUT OF PRODUCTION

While the B-25J has been available nearly continuously over these decades, its sister kit, the B-25H has been on limited runs and hasn't been released in a while. Nevertheless, you can still find these reasonably priced at kit swaps, etc. You can add an H-model gunship to your B-25 line as well!

The design was named in honor of Major General William "Billy" Mitchell, a pioneer of U.S. military aviation. Used by many Allied air forces, the B-25 served in every theater of World War II and after the war ended many remained in service, operating across four decades.

Those performance specifications led NAA to submit their NA-40 design. The NA-40 had benefited from the North American XB-21 (NA-39) of 1936, which was the company's partly successful design for an earlier medium bomber that had been initially accepted and ordered, but then cancelled.

However, the company's experience from the XB-21 contributed to the design and development of the NA-40. The single NA-40 built flew first at the end of January 1939. It went through several modifications to correct problems. These improvements included fitting 1,600 hp (1,193 kW) Wright R-2600 "Twin Cyclone" radial engines, in March 1939, which solved the lack of power.

In March 1939, North American delivered the substantially redesigned and improved NA-40 (as NA-40B) to the United States Army Air Corps for evaluation. It was in competition with other manufacturers' designs (Douglas 7B, Stearman X-100, and the Martin Model 167F)[3] but failed to win orders. The aircraft was originally intended to be an attack bomber for export to the United Kingdom and France, both of which had a pressing requirement for such aircraft in the early stages of World War II.

However, the French had already opted for a revised Douglas 7B (as the DB-7). Unfortunately, the NA-40B was destroyed in a crash on 11 April 1939 while undergoing testing. Although the crash was not considered due to a fault with the aircraft design, the Army ordered the DB-7 as the A-20.

There was no YB-25 for prototype service tests. In September 1939, the Air Corps ordered the NA-62 into production as the B-25, along with the other new Air Corps medium bomber, the Martin B-26 Marauder "off the drawing board".
Early into B-25 production, NAA incorporated a significant redesign to the wing dihedral. The first nine aircraft had a constant-dihedral, meaning the wing had a consistent, upward angle from the fuselage to the wingtip. This design caused stability problems.

"Flattening" the outer wing panels by giving them a slight anhedral angle just outboard of the engine nacelles nullified the problem, and gave the B-25 its gull wing configuration. Less noticeable changes during this period included an increase in the size of the tail fins and a decrease in their inward tilt at their tops.
NAA continued design and development in 1940 and 1941. Both the B-25A and B-25B series entered USAAF service. The B-25B was operational in 1942. Combat requirements lead to further developments. Before the year was over, NAA was producing the B-25C and B-25D series at different plants.

Also in 1942, the manufacturer began design work on the cannon-armed B-25G series. The NA-100 of 1943 and 1944 was an interim armament development at the Kansas City complex known as the B-25D2. Similar armament upgrades by U.S-based commercial modification centers involved about half of the B-25G series.

Further development led to the B-25H, B-25J, and B-25J2. The gunship design concept dates to late 1942 and NAA sent a field technical representative to the SWPA. The factory-produced B-25G entered production during the NA-96 order followed by the redesigned B-25H gunship. The B-25J reverted to the bomber role, but it, too, could be outfitted as a strafer.

NAA manufactured the greatest number of aircraft in World War II, the first time a company had produced trainers, bombers, and fighters simultaneously (the AT-6/SNJ Texan, B-25 Mitchell, and the P-51 Mustang).[citation needed] It produced B-25s at both its Inglewood main plant and an additional 6,608 aircraft at its Kansas City, Kansas plant at Fairfax Airport.

After the war, the USAF placed a contract for the TB-25L trainer in 1952. This was a modification program by Hayes of Birmingham, Alabama. Its primary role was reciprocal engine pilot training.

A development of the B-25 was the North American XB-28, designed as a high-altitude bomber. Two prototypes were built with the second prototype, the XB-28A, evaluated as a photo-reconnaissance platform, but the aircraft did not enter production.
​THE KIT:

The box art shows the B-25H model made up and parked with 2 crewmen standing beside it.

It is olive-drab over a light-gray undercarraige, with a white 37 on the sides of the rudder, a shark mouth on the nose and a seated gal in a red bathing suit with 17 yellow bomb mission markings and "Leroy's Joy" in red above her.

The other side panel has a few sentences of the history of the B-25, over features of the kit as: "kit can be assembled with bomb bay, boarding hatches, nose-gun hood and one side-mounted 50 cal machine gun cover open or closed. The interior of the fuselage is highly detaied with many of the features found in the actual plane.

Molded in olive-drab, the kit includes a pilot and two other members, decals for two different airplanes and a full-color folder telling how to build a diorama in which the finished model can be displayed. Cement and paint not included."
Below this is the copyright date of 1977 and Monogram's address in Morton Grove, IL. Kit was made and printed in the USA. This is followed by a nose-on color photo of this B-25H kit in Sheperd Paine's diorama.
​WHAT'S IN THE BOX: 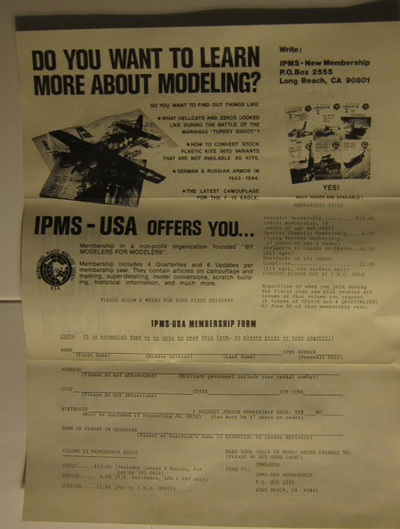 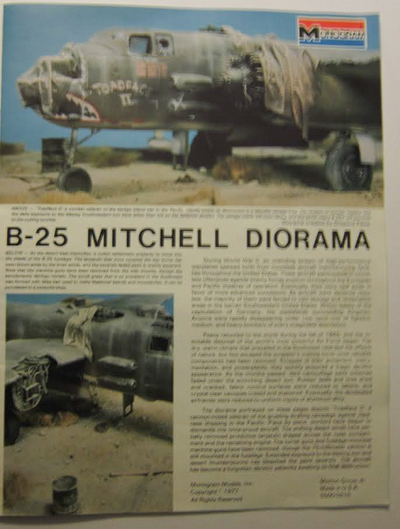 ​Instruction sheet consists of a large sheet that is 22" x 17" in size, folded several times to fit the box.

It contains 18 assembly steps, the history of the B-25, decal and painting instructions for two schemes as 3-views.

Both schemes are olive-drab over light-gray undercarraige. One is "Leroy's Joy". (already described above). The other has a white 42 over red serial no. 34381 on the rudder sides, a shark mouth on the nose and a gal in a polka-dot bathing suit holding a dog and "Dog Daize" in white on the side of the nose.

Trees are not alphabetized or illustrated in the instructions. They do however have part number tabs next to the parts on them. This means a lot of searching of the trees to find the right parts for each assembly. Bad move Monogram ! 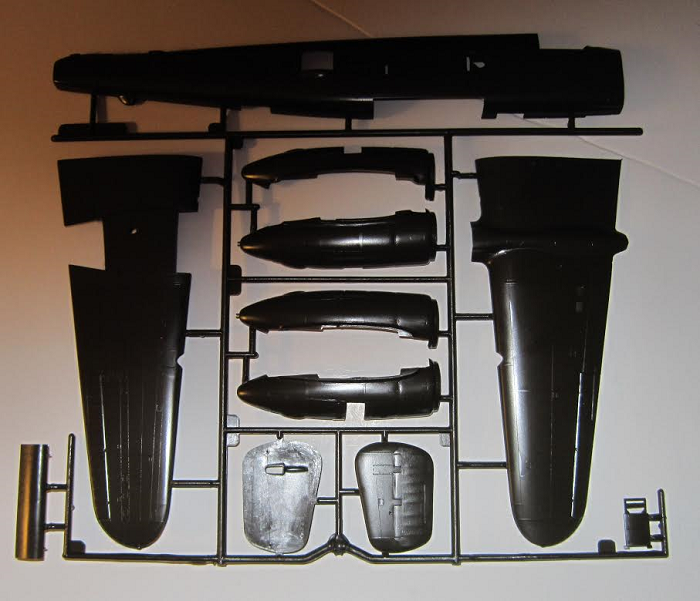 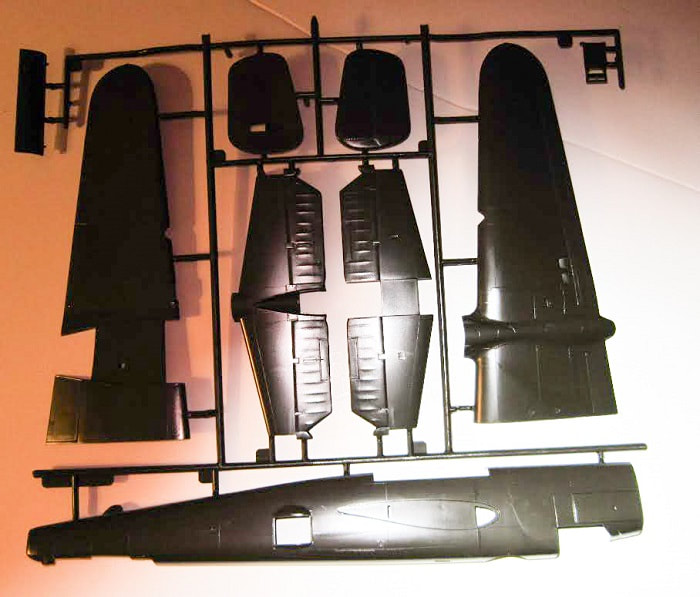 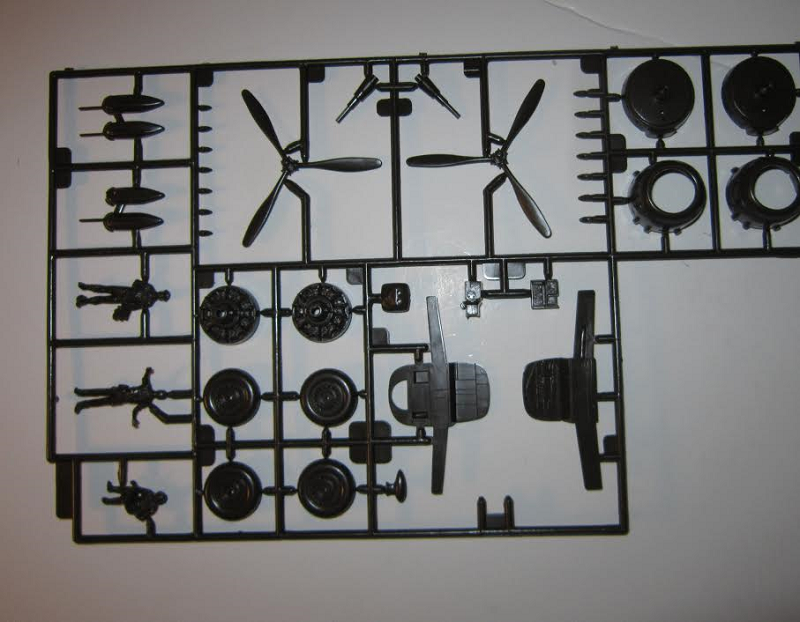 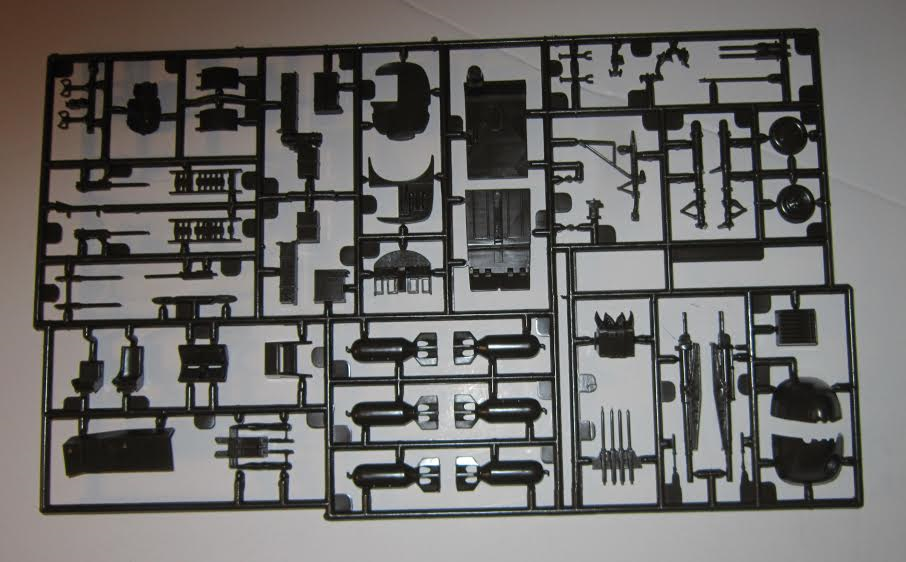 ​The clear tree holds the cockpit and turret windows and wing light lenses. 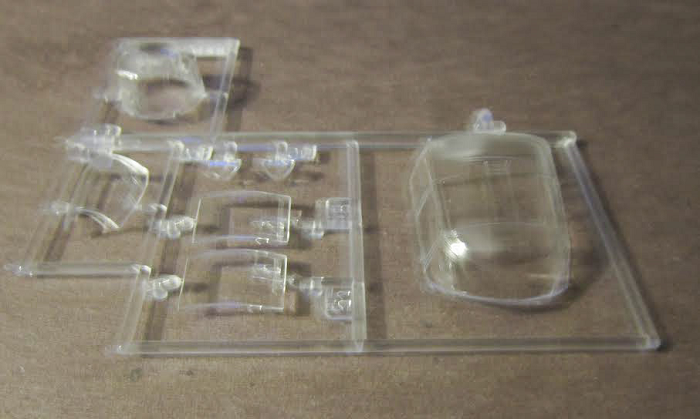 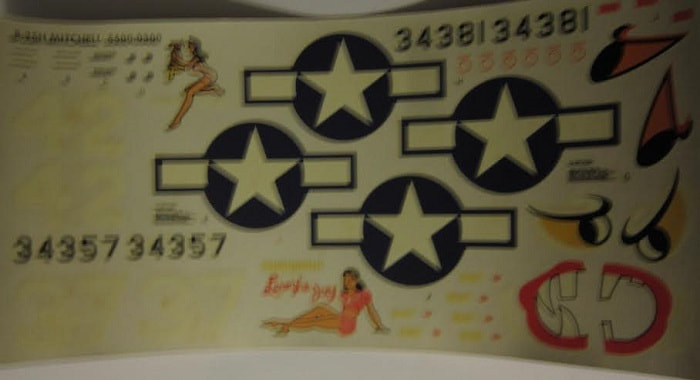 ​Bought at local hobby shop that went out of business years ago.