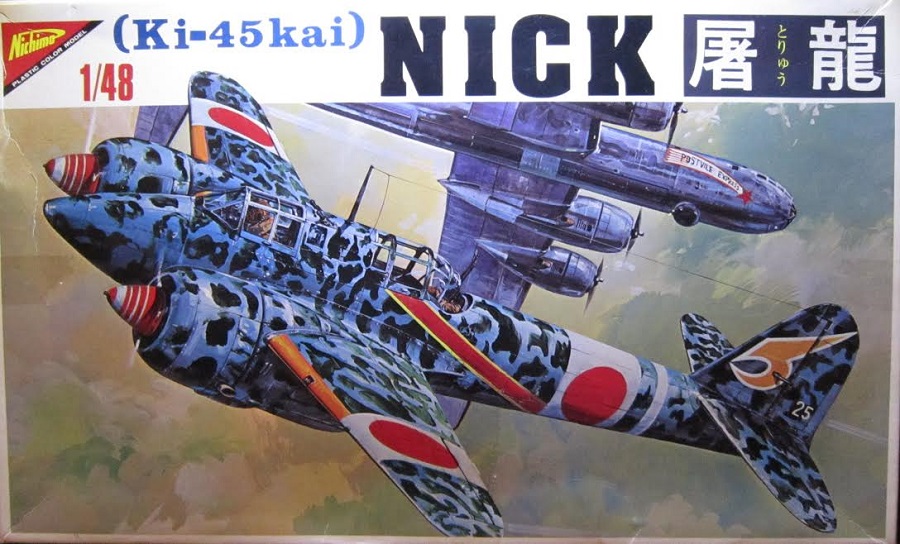 The Kawasaki Ki-45 Toryu (“Dragon Slayer”) was a two-seat, twin-engine fighter used by the Imperial Japanese Army during WWII. The army gave it the designation “Type 2, Two-seat Fighter”. The Allied codename was “Nick”.

In response to the rapid emergence in Europe of twin-engined heavy fighters, such as the Messerschmitt Bf-110, the army ordered development of a twin-engine, two-seat fighter in 1933, of the Ki-38. This only went so far as a mock up. By December of that year, the army ordered a working prototype as the Ki-45, which first flew in January 1939. Results from the test flights, however, did not meet the army’s expectations. The Ha-20 Otsu engines were underpowered and failure prone, while the airframe suffered from nacelle stall.

This Ki-45 did not enter service, but the army, insistent on having a working twin-engined fighter, ordered Kawasaki to continue development. Kawasaki responded by replacing the engines with the proven Nakajima Ha-25’s. Flight tests then were promising.

In October 1940, the army ordered continued improvements, such as switching to 1,080 hp Mitsubishi Ha-102 engines, and using the wings from the Ki-48 light bomber, which was also designed by Doi. This aircraft, designated Ki-45Kai, was completed in September 1941 and was officially adopted for use by the army in February 1942 as the “Type 2, Two-seat Fighter”.

The Ki-45 was initially used as a long-range bomber escort. The 84th Independent Flight Wing used them in June 1942 in attacks on Guilin, where they encountered, but were no match for, Curtiss P-40’s flown by the Flying Tigers. In September of the same year, they met P-40’s over Hanoi with the same results. It became obvious that the Ki-45’s could not hold their own against single-engined fighters in aerial combat.

Nichimo is a model company based in Japan.

This kit comes in a tray and lid type box. The box art shows a Nick attacking a B-29 that has the name “Postvile Express” on it’s nose. However, I think the artist misspelt Postville by only using one L.

The Nick is in the markings of an aircraft from the 53rd Sentai, on home defense duties during late 1944 – early 1945. This aircraft has been much photographed during the war. Pictures of it appear on pages 146 and 193, in Donald Thorpes “Japanese Army Air Force Camouflage and Markings, World War II” book, by Aero publishers Inc. from 1968.

It is in Type 8 camouflage, of a heavy pattern of dark green spots over natural metal. The Japanese red roundels are all on white home defense bands. There is a diagonal red stripe, outlined in yellow, on the fuselage sides. This was usually an indication of a Chutai leader’s aircraft. In front of the tail is a white fuselage band. The tail code is a yellow-orange character, outlined in white, with the small number 25 in white low on the rudder. The propeller spinners have alternating red and white stripes around them.

A side panel shows a small repeat of the box art, next to a history of the Nick in English. However, this is very fractured English and grammatically hard to read.

The other side panel has a color profile of a Nick from the same unit, in almost the same scheme. It does not have the leader’s diagonal stripe of course. The tail has the same character, but the small white number on the rudder is 65.

Inside the box are 3 large light gray trees of parts in stapled shut cello bags. A clear parts tree is in one of these bags and the decal sheet is inside another of the 3. The light gray fuselage halves are loose and un-bagged. The instructions complete the kit’s contents.

The instructions consist of a large sheet that is accordion folded to fit the box. On one side is 2 busy assembly steps. The reverse side has the 3rd and last assembly step on it. Below that is a side profile of aircraft number 65, mentioned above. Everything in the instructions is in Japanese only.

There are no part trees illustrations in the instructions. Parts are numbered and alphabetized on the trees and in the assembly steps. 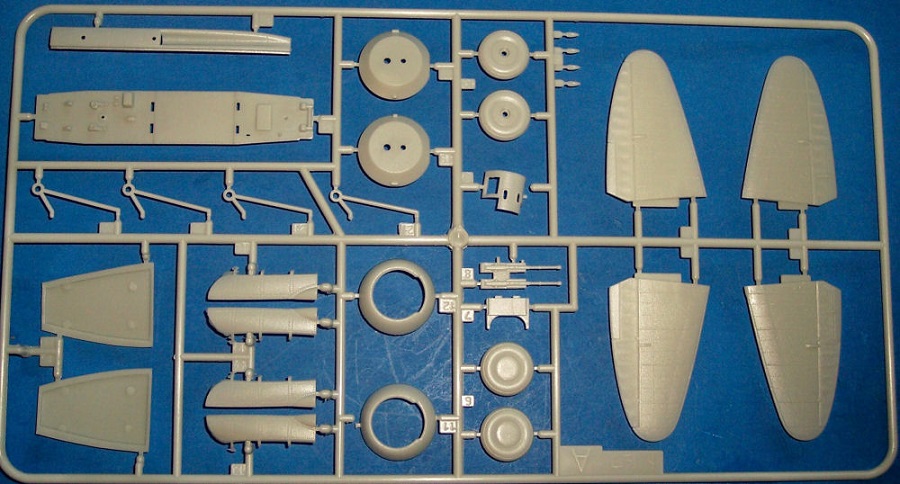 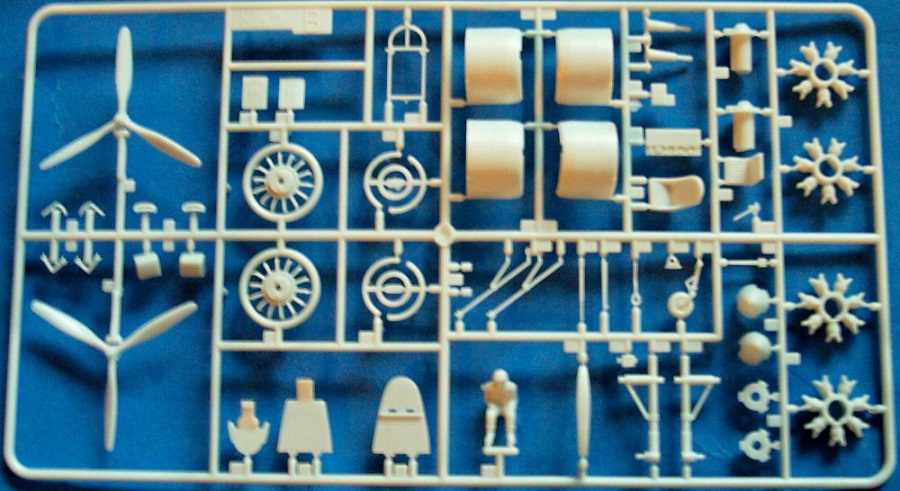 Letter C tree is the clear cockpit parts (4 parts) Two parts had broken off this tree, due to friction against the large light gray tree in the same cello with it.

The next light gray tree is not alphabetized or numbered. These are the wing half parts. 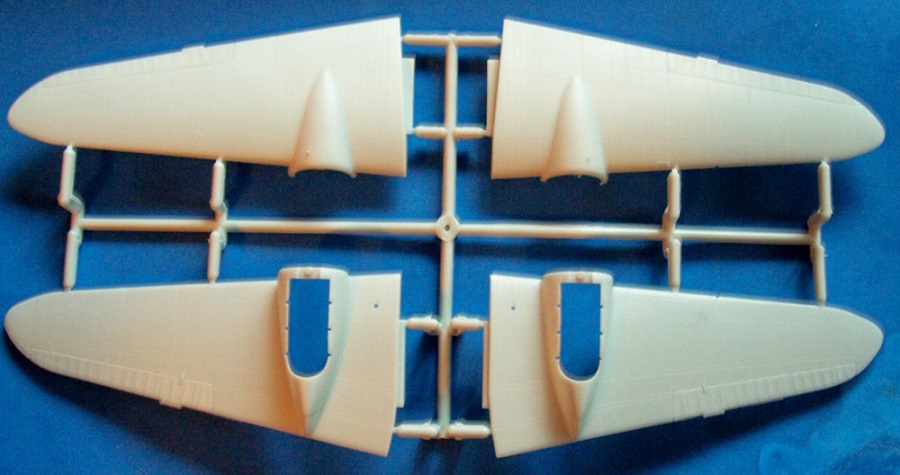 The light gray fuselage halves are next. They too are not alphabetized or numbered. This is because they and the wing parts are pretty obvious what they are.

Panel lines are all engraved. Control surfaces and the cockpit transparencies are molded solid and would take surgery to re-position or open. 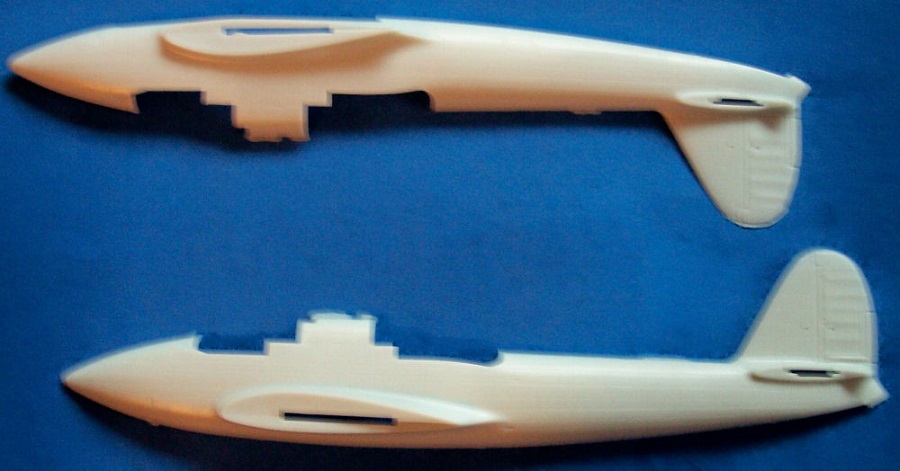 The decal sheet carries some stencil marks and 2 stylized ARROWS that I read in a book were also carried on the fuselage sides of an aircraft from the 53rd Sentai. However, no illustration of this plane is in the instructions. The tail number of white 98 is on the sheet and possibly is for this aircraft also? 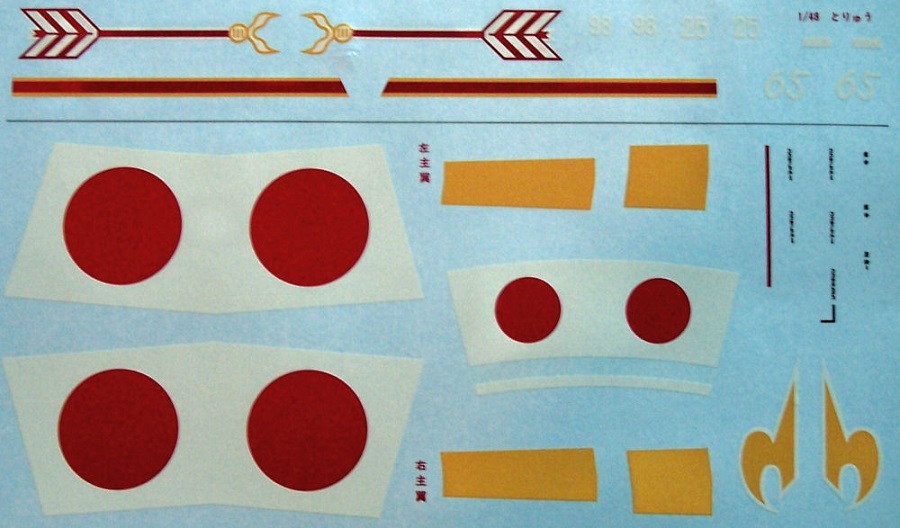 I don’t look forward to doing the paint schemes shown on the box. I’m sure I could not pull off that spotted pattern well.

This is one neat Japanese twin-engined fighter. The cockpit detail is very nice.

Recommended. I purchased my kit years ago at my local hobby shop.

I found one source on the Scalemates web site for a store in Europe that has this kit for 38 Euro, which is $42.72 U.S. dollars + shipping.