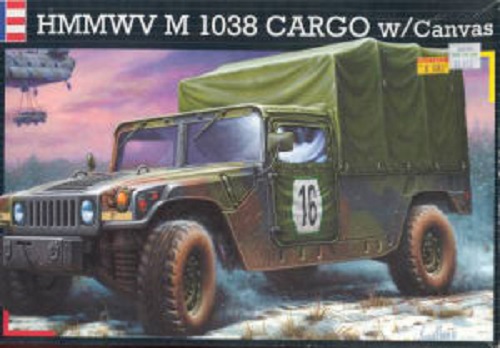 In Box review of Revell of Germany 1/35th scale

The HMMWV (High Mobility Multi-purpose Wheeled Vehicle), nicknamed Hummer or Humvee, introduced into the U.S. Army from 1985, was developed as a successor to the legendary Jeep. Numerous variants are used and it is distinguished by its outstanding cross-country performance.

Revell is a model company that has been around many years. It makes all manner of model subjects in the popular scales and has offices in both the U.S. and Germany.

This kit has been out on the market for some time. I can currently not find any for sale on the web. It may be currently out of production. I won my kit in a raffle at a IPMS contest.. The price listed above is what was on a label still attached to the box.

The kit comes in a tray bottom box with a hinged lid. The box art shows a HMMWV M1038 cargo vehicle with a canvas roof, moving over a snow covered field. A CH-47 Chinook helicopter is in the background hoisting another HMMWV with cables. It is in overall olive drab with a white hexagon outlined in black with a black number 16 on it on the cab doors. On the front of the passenger side fender is a yellow band with the black number 82F29 on it. The driver’s side fender has another yellow band on it with the black number B7 on it.

A side panel shows 4 color illustrations of the marking schemes provided on the kit’s decal sheet. They are:

Next to these illustrations is a listing of the kit’s features and suggested Revell brand of paint colors to use to finish the model., in four languages including English.

The other side panel has a short history of the HMMWV in the same 4 languages and another listing of what’s in the kit in 8 languages, including English.

Inside the box is 3 dark olive drab parts trees, 1 clear parts tree, the decal sheet and the instructions.

Page 1 begins with a black and white repeat of the box art, followed by the history of the HMMWV in German and English.

Pages 2 and 3 has warnings, safety rules and cautions in 18 languages, including English.

Page 4 has “read before you start” instructions in the 18 languages.

Page 5 begins with international assembly symbol explanations and a list of suggested colors to use to decorate the model.

The top of page 6 has the parts tree drawings. These trees and the parts themselves are numbered. However, the trees are not alphabetized. Some parts are blacked out on these drawings as being surplus and not needed to complete the kit. The bottom of the page has the first 4 assembly step drawings. Colors are called out as needed in each drawing by using a pennant symbol with a letter in it. The letters correspond to the listings of paints on page 5, which will have to be refered to.

Pages 7 through the top of page 10 give a grand total of 25 assembly steps. The bottom half of the page gives a five-view for one of the 4 marking schemes, already mentioned above.

Page 11 gives the other 3 marking schemes, also as 5-views 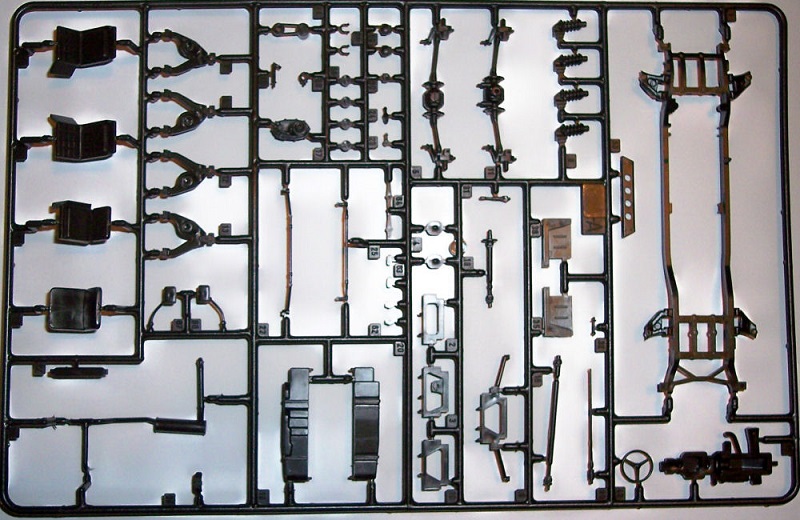 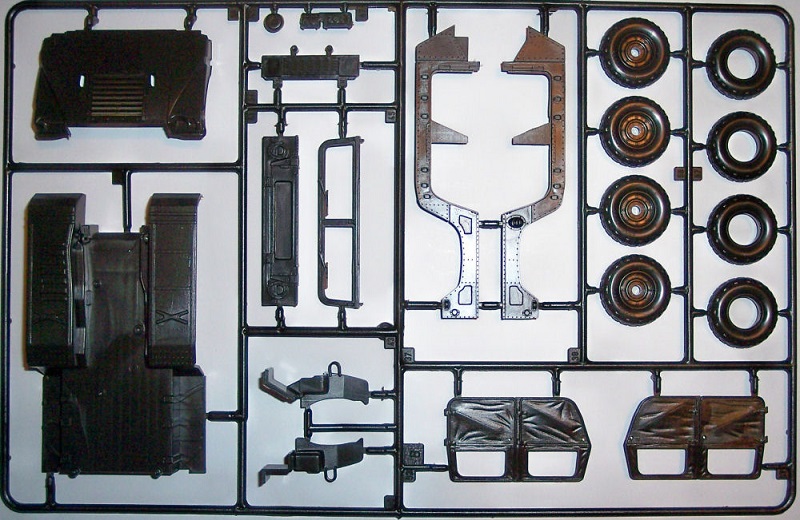 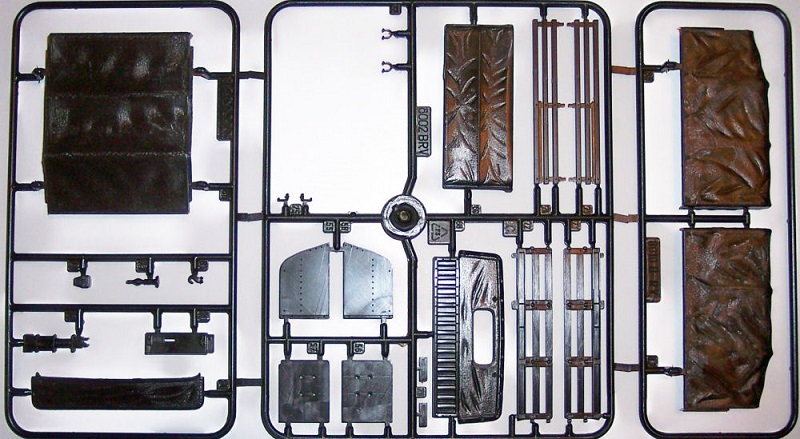 The clear parts tree holds all the window transparancies. (7 parts) 2 of these are blacked out on the instruction sheet as being surplus. 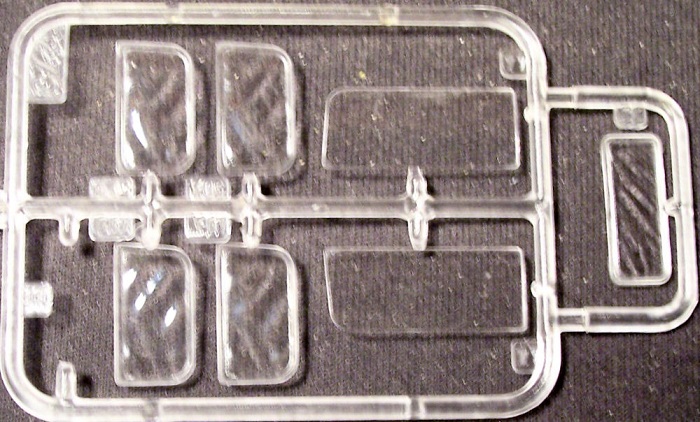 I may be wrong, but it looks to me that perhaps the front wheels can be steered in this kit??

There is no engine provided to go under the hood. So this kit is what is called a CURB-SIDE vehicle.

Perhaps some after-market company offers one of these? At any rate, the hood would have to be cut open to show one. There are no figures provided, nor any kind of a cargo load.

This looks like it will make up into a pretty nice model. People that know me well know that modern AFV’s are not my bag. My preferences run to mostly WWII stuff, with a few WWI ones thrown in for good measure. I am told that this is mostly an Italeri mold and that the HMMWV has been issued in several variations by either them or Revell of Germany.

One fellow on the internet mentioned “The M 1038 is a better deal than the M998 kit (No. 03013) by Revell of Germany. It comes with both the cargo cover and troop seats. It does not include the 3-holed bumper and brush guard of the M998 kit. Instead, it includes an antenna and mount as well as a recovery winch”.

The decal sheet came with a tissue to cover it’s face and protect it. However, this was loose and floating around the box. So, it was doing nothing to protect the print on the decal. 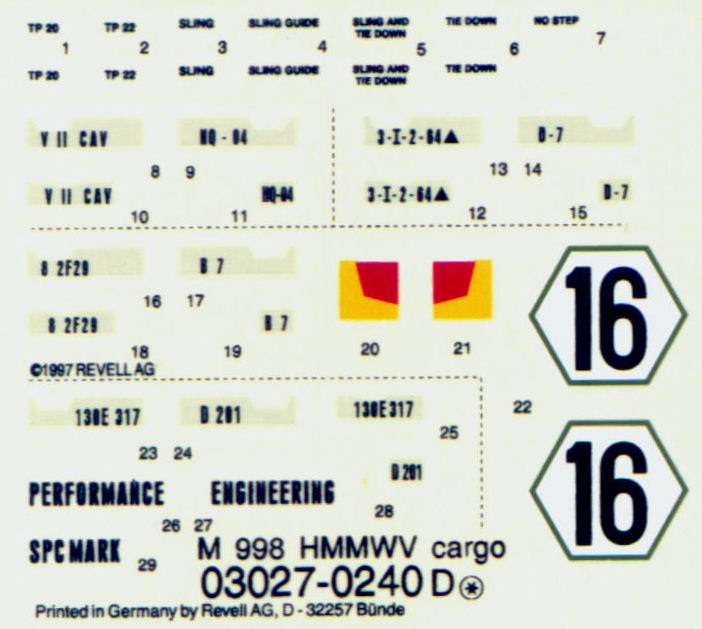 Recommended to modelers of modern vehicles. I am more than willing to peddle this kit to any modeler that would like to buy it away from me.