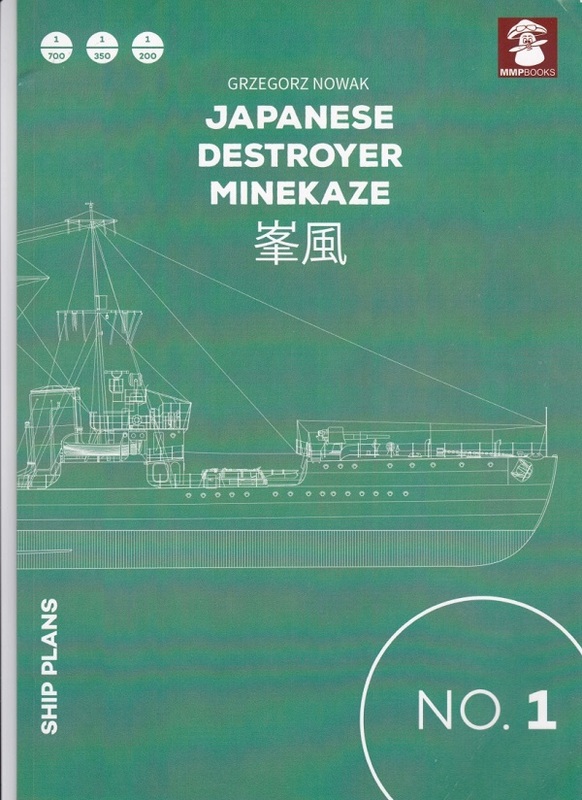 The Minekaze class was a class of fifteen 1st-class destroyers of the Imperial Japanese Navy.[1] Obsolete by the beginning of the Pacific War, the Minekaze-class ships were relegated to mostly secondary roles, serving throughout the war as patrol vessels, high speed transports, target control vessels, and as kaiten (suicide torpedo) carriers. Most ultimately were lost to U.S. and British submarines.
SPECIFICATIONS:

Mushroom Model Publications (MMP) is based in the UK. All their books are printed by their associate Stratus in Sanodomierz, Poland in the English language. Stratus also prints their own line of books in both Polish and English.

This new publication came to me from Stratus in Poland in a padded envelope, along with a MMP book catalog and a nice white cloth carrying bag with the Stratus and MMP logos printed on it. Nice !!!

This is the start of a series of plans of ships that MMP is going to publish.

There are 6 of these plans inside the cover that are printed on both sides.
The plans are done to the popular ship modeling scales of 1/700th, 1/350th and 1/200th.
The first plan is to 1/350th scale. On one side is drawings of the side, top and internal structure and features of the Minekaze class of destroyer in 1920.

The second plan is to 1/200th scale. One side has drawings of the hull plans and body work. The other side has a cross section cut-way plans of the forward and aft sections of the Minekaze class of destroyers, again in 1/200th scale.

The fourth plan continues in 1/200th scale. One side shows a aft section side and top illustration showing external features of the destroyers in 1939. The other side has the forward section top and side view in 1939.

The fifth plan is to 1/200th scale. Again we get the rear section and the forward section’s top and side views on each side showing the external features in 1944.

The sixth and final plan has the face side showing drawings of parts of the ships in the 3 scales on half the sheet and a illustration of the bridge structure on the other half of the plan as shown in 1920, but to no particular scale (it is large).


The other side of the plan has 1/700th scale illustrations of the side and top and internal beam and bulkhead structure of the ships in 1920, 1939 and 1944 on half the sheet and specifications on the other half.

There are 12 destroyers listed in this class of destroyers:

This is one neat set of plans for this class of Japanese WWII destroyers. I do not know if any kits exist of any of them as I am not a ship modeler per se.

Highly recommended to ship modelers and nautical historians and enthusiasts alike.
I want to thank Roger Wallsgrove Editor-in-Chief of MMP and the folks at Stratus who sent me this set of plans from Poland.

MMP books are distributed by Casemate in the U.S. and by Platypus Publications in Australia. Listings of all MMP books can be seen on the Casemate web site.