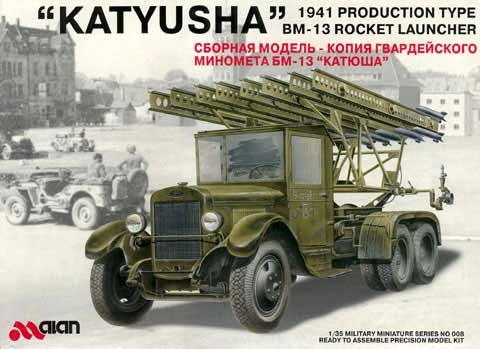 As early as the 1920’s, Soviet Russia began to develop a weapon know throughout the world as “Katyusha”. Only in June of 1941 was it decided to produce this weapon serially. The 133mm jet missile M-13 was developed in 1939. It was intended for hitting ground targets. This missile hit targets at 8 km and more. The combat machine BM-13 was developed in 1940. It was a construction with 16 launching rails, installed on a frame, equipped with a sight, turning and lifting gears, as well as an electric fuse for launching the missiles.

All the structure was intended for installation on the chassis of a truck, for increased road capability. Initially, the truck ZIS-6 was used for that purpose. Subsequently, the launcher was installed on Ford, GMC, International and Studebaker chassis. These were delivered to the USSR during WWII under the lend-lease program. Seven BM-13’s on the ZIS-6 chassis, and 3,000 missiles M-13 were subjected to tests at the time. They were put into service at the time of aggression by Nazi Germany against the Soviet Union. The first experimental battery was formed on June 29th, 1941 and it participated in combat operations for the first time on July 14th, 1941.

The first batteries consisted of 4 to 8 machines of BM-13’s. BM-13’s participated in all the major battles of the Red Army between 1941-1945. Within this period, 6,500 BM-13 machines were manufactured. Almost 4,000 of these launchers were lost in combat. The large losses were due to inevitable exposure of the weapon after the first salvo because of the clouds of smoke and dust that gave away their position. From 5 to 10 minutes, at best, was required for reloading, and that was sufficient enough to destroy the battery with enemy artillery.

Alan is a model company that at one time was based in St. Petersburg, Russia. They went bankrupt and their molds were acquired by Ark brand.

The kit comes in a tray and lid type box. The cardboard used to make this box is kind of on the flimsy side. It is bulging with the contents too.

The box art has a painting of a BM-13 superimposed on a black and white photo of a town square. In the background is a U.S. jeep, a couple of trucks and buildings. The BM-13 is in overall Russian military green. It carries white markings on the cab doors for a vehicle assigned to a Guard’s unit in 1943-1945 (this marking is on the decal sheet in the kit). However, the serial number in this mark ends with 27 and the same marking on the decal sheet ends in 28.

On one side panel of the box is a side profile color illustration of a BM-13 that has been over painted with white wash for winter camouflage. It carries the same markings on the cab doors. Next to it, is one paragraph histories of the vehicle in 5 different languages (including English). These are all labeled with color illustrations of the flags of the countries where these languages are spoken.

There are 11 black vinyl tires in a zip-locked cello and a tree of clear parts and the decal sheet in a second zip-locked cello. The instructions complete the kit’s contents.

The instructions consist of a single sheet that is folded in the center into 4 pages of 8” x 11 ½” format.

Page one begins with a black and white repeat of the BM-13 off the box art, but minus the background photo. This is followed by the history of the BM-13 in Russian, English, Japanese and German.

Page two to the top of page 4 gives a total of 11 assembly steps. The bottom of page 4 is the marking and painting instructions. Color is called out for the BM-13 in overall Soviet military green in warm weather and that it could be over painted with white-wash for winter camouflage. Numbered arrows point to the areas where the numbered markings on the decal sheet should go. There are 4 options:

There are no parts tree drawings in the instructions. 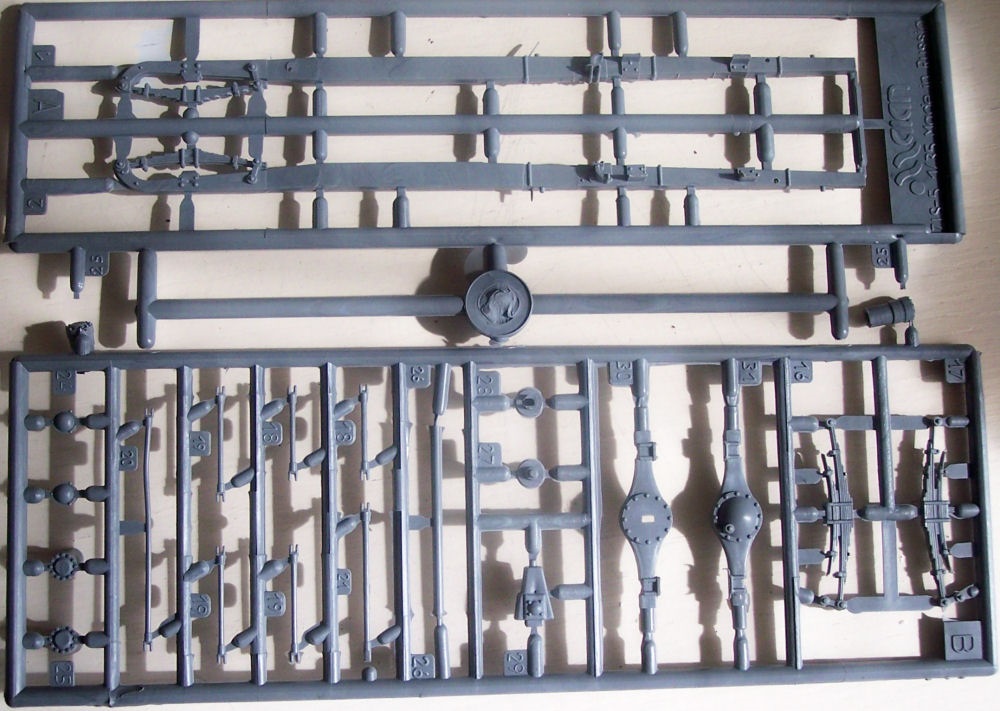 Large dark green letter C tree is molded too big to fit the tray of the box. So, one end of it has been chopped off in a long strip. This tree holds all the parts for the rocket launcher rails, the rockets and the elevation arms etc. (102 parts) There are 16 rockets provided. 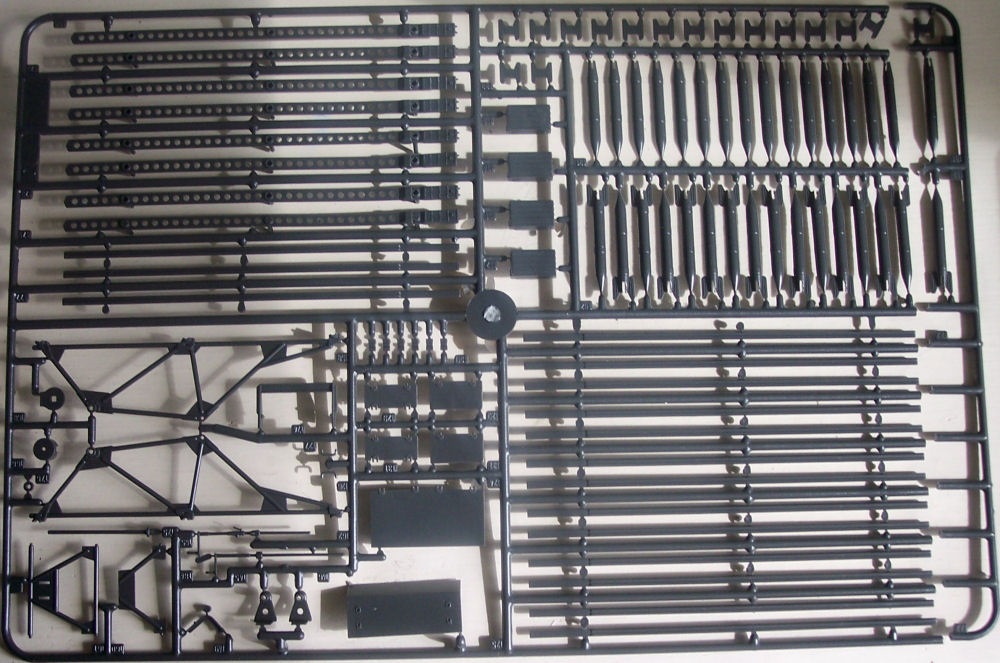 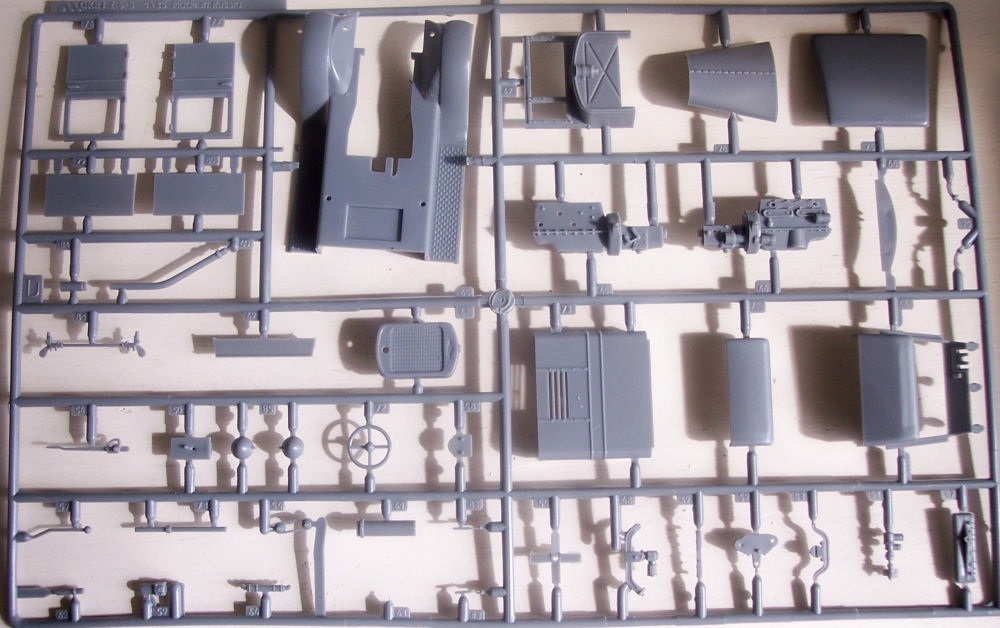 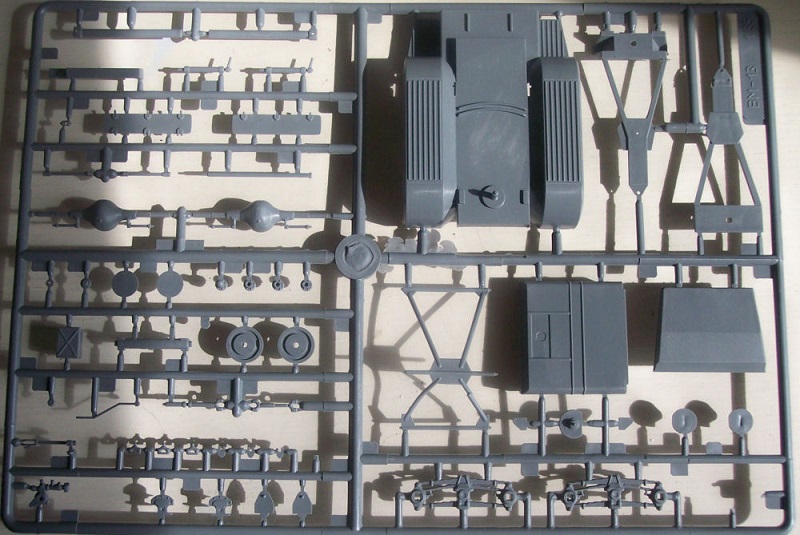 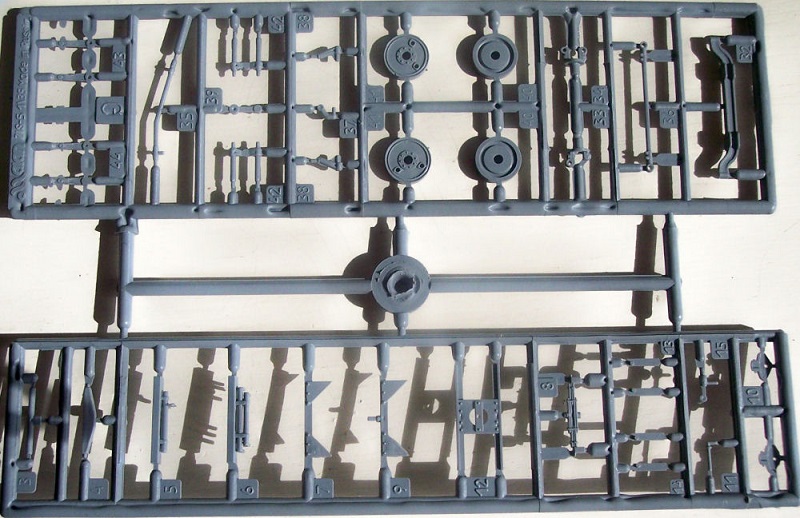 Letter G is again used to mark the small clear parts tree. It holds the cab windows and the headlight lenses. (7 parts).

The decal sheet (markings already described above) and the 11 black vinyl tires complete the kit’s contents (one tire is the spare). 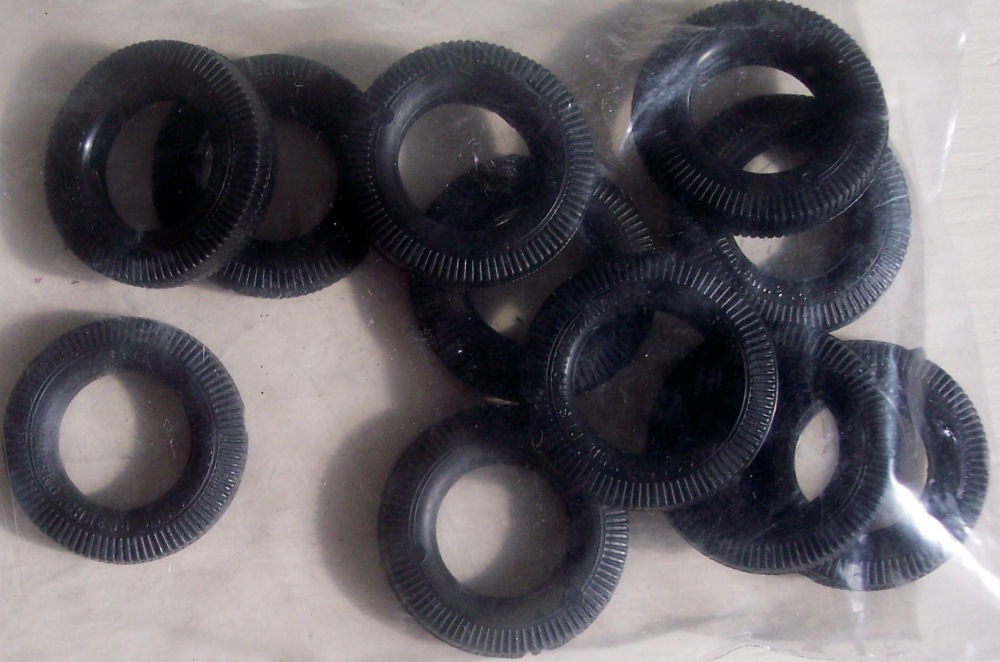 I tried to photograph the decal sheet, but the markings on it are all white against the white backing paper and invisible to photograph. So, read the description above. Other than the unit markings there are some white stars that are to go next to the cab doors. I think they may be marks of the number of mission the truck was in….or kill marks??

There are no crew figures included in the kit.

The parts trees all have the numbers next to the parts. I have found, in other kits from Russia and the Czech Republic, by other model kit manufacturers, that there are sometimes no part numbers on the trees and you have to keep referring to the parts trees illustrations and assembly drawings to identify things by their shape. Glad to see the numbers on the trees this time.

This is one neat Soviet soft-skinned vehicle. I could not help noticing that there is a tab on all the trees that make up the basic truck that say “ZIS-5”. The history says that MB-13’s were built on the “ZIS-6”. Maybe there wasn’t that much difference between the two?

The kit has a darn nice engine under the hood. It could be displayed if a modeler was to fold up the side panels of the hood. Cab doors are separate too, and can be posed open or shut. I am not sure whether the rocket launcher can be made to go up and down after assembly though. I don’t see any DO NOT GLUE symbols on the assembly step for it anyways. It may be able to.

Highly recommended to modelers that have had a few other AFV kits under their belts due to the complexity of the rocket launcher and also the truck.

I used to trade kits with the owner of Alan in Russia. This kit is one he traded to me before his company went bankrupt and all his molds now belong to Ark brand (another Russian model company).