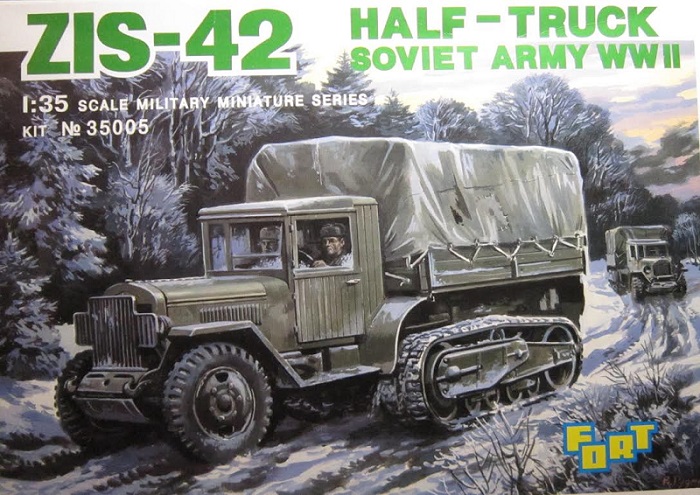 Fort is a model company based in the Ukraine.

During the first few days of WWII the Soviet Army lost a large number of various cars and trucks. Although almost all cars and trucks in the Soviet Union were taken over by the Red Army, it still was not enough to replace the lost ones. The most needed was a medium light-weight truck of simple and reliable construction.

Engineers of the ZIS factory in Moscow tried to find a solution in the re-engineering of existing ZIS-5’s. The goal was to reduce production time and resources to produce a reliable truck. Research resulted in a truck based on the chassis of the original ZIS-5 with a wooden cab and cargo space. The engineering effort, to save material, resulted also in reducing the number of headlights to just one. The converted truck was known as the ZIS-5V. Production started at the Uljanovsk factory in 1942. The ZIS-5V was later produced in Moscow too. Large numbers of different variants were based on the original ZIS-5V, like a mobile repair vehicle, an ambulance and a fuel truck etc.

A half-track cargo truck (subject of this kit) was produced on the basis of the ZIS-5V. It was designated as the ZIS-42. It’s 415 mm wide rubber tracks were equipped with metal shoes. Brakes with a mechanical drive, acted on the back driving axle, from which the turning torque was conveyed to the driving sprockets of the tracks by means of two chains.

Due to the fact that the ZIS-42M version consumed 55 to 60 liters of fuel per 100 km traveled on roads, the trucks were equipped with a 300 liter capacity fuel tank.

The kit comes in a shrink-wrapped very sturdy tray and lid type box. The box art shows 2 ZIS-42’s traveling down a snow-covered road through a forest.

The other side panel has a small color repeat of the box art, followed by Fort’s street address in the Ukraine, their phone number and web address.

The kit contains 4 large, 1 medium, and 2 small gray parts trees. There is also a tree of clear parts, 3 black polystyrene tires (2 are for the front axle and the third is a spare tire) and the black vinyl rubber-band type tracks. The decal sheet and instructions complete the contents. All the parts were in one common cello bag.

The instructions consist of a single sheet that is folded in the center to create 4 pages in 8 ¼” x 11 ½” page format.

Page 1 of the instructions begins with a history of the vehicle in Ukrainian and English, followed by the parts tree drawings. Some parts are X’d out on these drawings, indicating that they are excess or not needed to complete this kit. The trees are not alphabetized and the numbers shown on the parts trees drawings jump all over the place on each tree. This will make more work to identify parts needed for each assembly. Bad move Fort.

Page 2 through the top of page 4 gives us a total of 9 assembly steps.

The bottom of page 4 gives a two view drawing for painting and decal applications.

There are 3 marking choices shown. However, these are only changes in serial numbers that go on the cab doors and the rear of the truck. The color called out to use, overall, is khaki. I disagree with this and think it should say dark green, the usual color used on most WWII Soviet equipment. There are alternate markings for the license plates and symbols on the cab doors. However, we are not told which symbols go with which license plate numbers , nor what group these represent. Another bad move Fort.

The parts trees have no alphabetic label or part numbers molded on them. 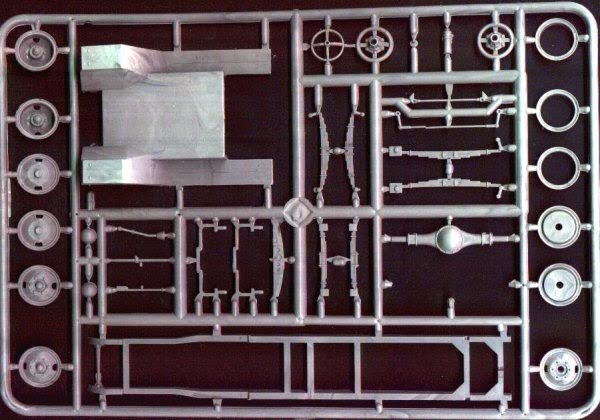 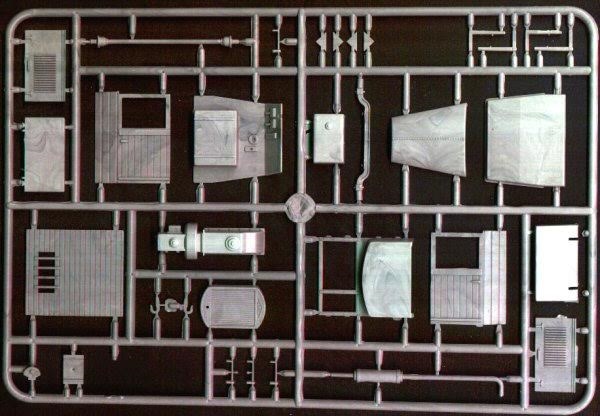 The third large gray tree of parts holds all the wood cargo bed parts (13 parts). Two of these parts are excess. 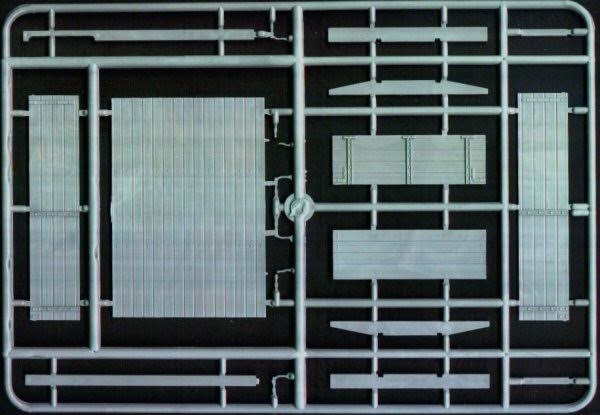 The fourth large gray tree of parts holds the road wheels, drive sprockets and the housings for the rear track apparatus (42 parts). 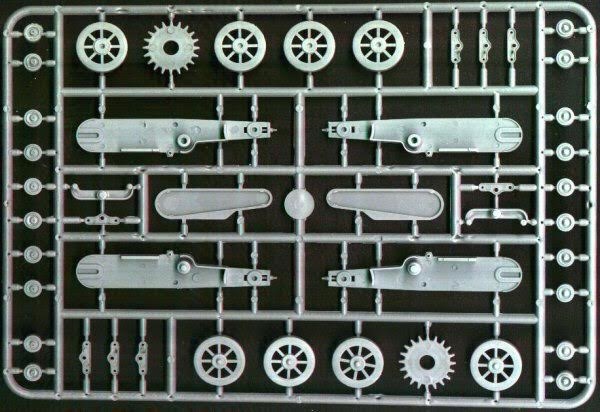 The medium sized gray tree of parts holds the radiator grill, 2 ski-tubs (that fit under the front tires to turn the truck into a virtual snow-mobile…neat!) etc. (20 parts). 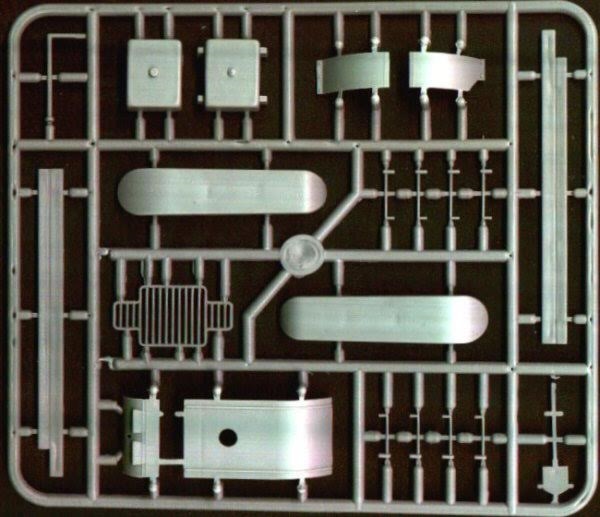 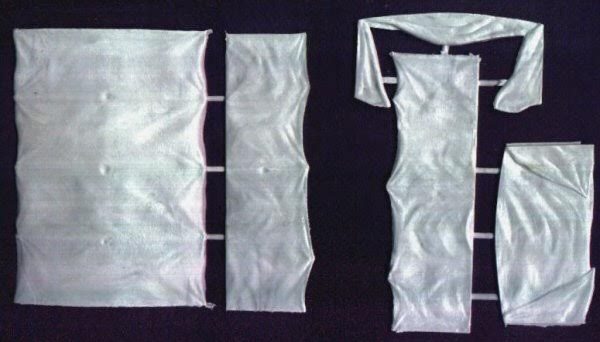 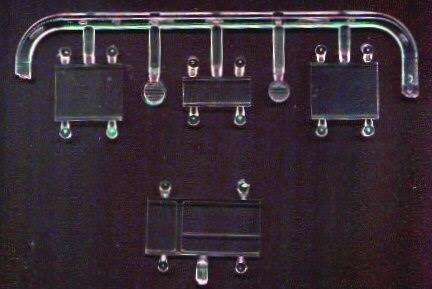 The final parts are the 3 black styrene tires and the vinyl rubber band type tracks. 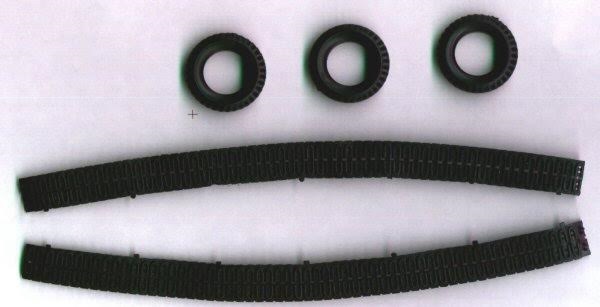 I intend to build this truck, with the ski tubs under the front tires, on a base with some railroad snow on it. However, I will have to find a driver figure as none is provided in the kit.

I intend to put a M4 quad-Maxim anti-aircraft machine gun in the cargo bed. This is an AO Tankmaster brand kit that is both resin and white metal and highly detailed that I have bought from the NKR mail-order hobby store in Australia years ago.

However, this kit has instructions that are VAGUE to say the least and hard to figure out. In the last 6 months MiniArt brand has released a kit of a Gaz AAA Soviet truck with the quad maxim machine gun to go in the cargo bed. It is kit no. 35177, but difficult to find a dealer and it’s expensive…sigh.

.. I also need a Soviet soldier to be manning the Maxim and a driver figure also, with either this kit or the MiniArt one if I get my hands on it. Neither kit comes with figures.

I have the kit about 80% built and the Maxim barely started.

This kit is crisply molded with no flash in evidence anywhere. I recommend it to any Soviet WWII subject modeler.