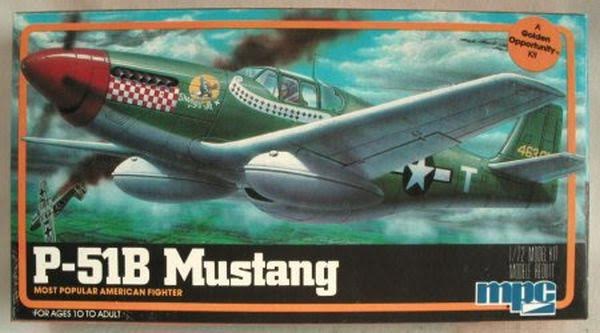 OUT OF PRODUCTION (kit has a copyright date of 1982)
​HISTORY:

The North American Aviation P-51 Mustang is an American long-range, single-seat fighter and fighter-bomber used during World War II, the Korean War and other conflicts. The Mustang was designed in 1940 by North American Aviation (NAA) in response to a requirement of the British Purchasing Commission for license-built Curtiss P-40 fighters. The prototype NA-73X airframe was rolled out on 9 September 1940, 102 days after the contract was signed and first flew on26 October.

The Mustang was originally designed to use the Allison V-1710 engine, which, in its earlier variants, had limited high-altitude performance. It was first flown operationally by the Royal Air Force (RAF) as a tactical-reconnaissance aircraft and fighter-bomber (Mustang Mk I). The addition of the Rolls-Royce Merlin to the P-51B/C model transformed the Mustang's performance at altitudes above 15,000 ft, matching or bettering that of the Luftwaffe's fighters. The definitive version, the P-51D, was powered by the Packard V-1650-7, a license-built version of the Rolls-Royce Merlin 66 two-stage two-speed supercharged engine, and was armed with six .50 caliber (12.7 mm) M2/AN Browning machine guns.

From late 1943, P-51Bs (supplemented by P-51Ds from mid-1944) were used by the USAAF's Eighth Air Force to escort bombers in raids over Germany, while the RAF's 2 TAF and the USAAF's Ninth Air Force used the Merlin-powered Mustangs as fighter-bombers, roles in which the Mustang helped ensure Allied air superiority in 1944. The P-51 was also used by Allied air forces in the North African, Mediterranean and Italian theaters, and also served against the Japanese in the Pacific War. During World War II, Mustang pilots claimed 4,950 enemy aircraft shot down.

At the start of the Korean War, the Mustang was the main fighter of the United Nations until jet fighters such as the F-86 took over this role; the Mustang then became a specialized fighter-bomber. Despite the advent of jet fighters, the Mustang remained in service with some air forces until the early 1980s. After World War II and the Korean War, many Mustangs were converted for civilian use, especially air racing, and increasingly, preserved and flown as historic warbird aircraft at airshows.
​THE KIT:

The box art shows a P-51B flying above clouds that has just shot down a Me-109 that is going down in flames. The P-51 is in olive-drab above a grey undercarraige. It has a red nose and prop spinner. There is a black and white checkerboard strip underneath the exhuaust pipes, followed by a character of a blue parrot with boxing gloves on atop a yellow circle with the white cursic "Shangri-la" below it. A white banner below the cockpit has 30 black crosses on it for victory marks. There is  white letters VF before the fuselage star and a white letter T behind it. There is a yellow serial number on the rudder that is 4630? (last digits are hidden behind the elevator). However, this number is not one given on the decal sheet.

One corner of the box are says the kit is for ages 10 to adult and a red circle says "a golden opportunity kit" on it.

One side panel has 4 color walk-around photos of the aircraft in the box art scheme. However, these shots show the model with a white prop spinner and white invasion stripes. The kit is said to be made and litho in the USA, this is followed by the statement "Collect Golden Wings tokens and earn a bonus MPC kit free. Offer good only in the USA".

The other side view has a one paragraph history of the P-51B over the kit features. Which are: Wing drop tanks, optional position landing gear, pilot figure, molded in olive drab. This is followed by a color side photo of the model made up. The tail number is a yellow 36 913. Which is what is on the decal sheet.
​WHAT'S IN THE BOX:

This kit contains 4 olive drab trees in a sealed cello bag and a clear part that is loose in the box. The decal sheet, instructions and a sheet telling about the Golden Opportunity free kit.

The instructions consist of a single sheet folded in the center to create 4 pages in 6 1/2" x 7" page format.

Page 1 of the instructions begins with the history of the P-51B, international assembly symbol explanations, IMPORTANT! READ THIS FIRST instructions, the 1982 copyright date over the first assembly step.

Page 2 and 3 give a grand total of 6 assembly steps.

Page 4 has a 3-view of the box art scheme. Already described above. "Shangri-La" was flown by the 8th Air Force ace DonGentile from the Debden Eagles.

The instruction sheet is folded 2 more times so it can fit the small box.

You need to collect a minimum of 10 tokens off the kit boxes to get a free kit. More tokens will get you better kits. A one dollar postage and handling charge must be sent in to MPC to get your kit years ago before the program was over.

Trees are not alphabetized and there are no parts tree illustrations in the instructions. However, the trees are numbered. 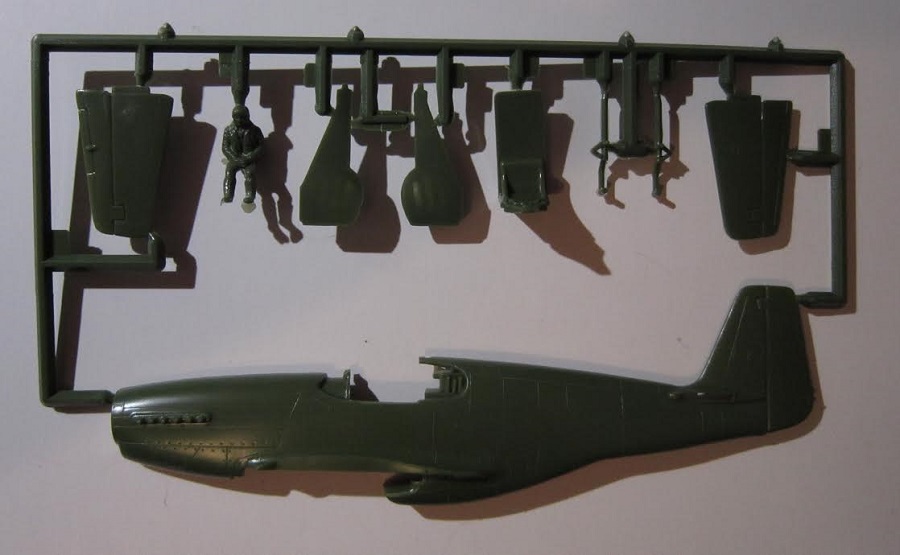 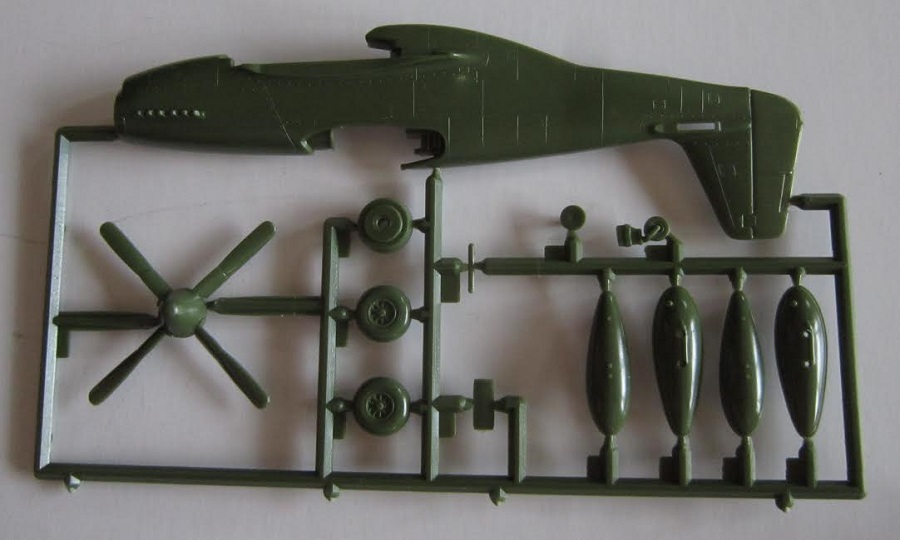 The fourth olive drab tree holds the wing lower half. It is full span. (1 part)

​The clear part is for the full canopy. It would take surgery to pose it open and the cockpit is pretty bare except for the seat and pilot. All control surfaces are molded solid and would also take surgery to re-position them. 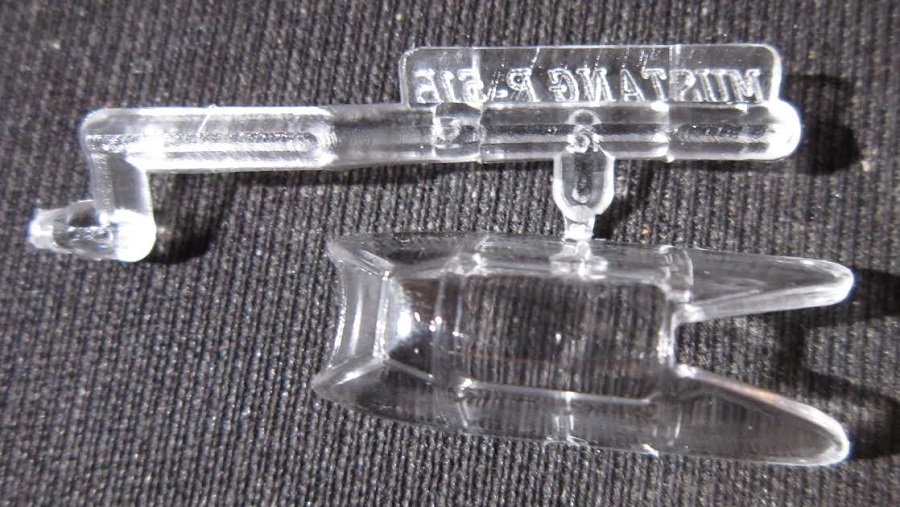 Pretty basic kit, but in the right hands should make up nice. A good kit for a novice modeler and a quick build project. ​
I won this kit in a raffle at a recent IPMS contest I attended.