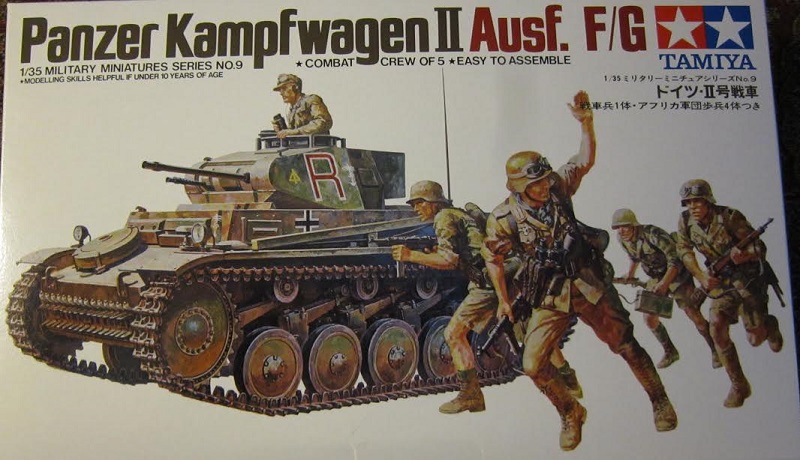 ​Although the vehicle had originally been designed as a stopgap while larger, more advanced tanks were developed, it nonetheless went on to play an important role in the early years of World War II, during the Polish and French campaigns. The Panzer II was the most numerous tank in the German Panzer divisions beginning with the invasion of France. It was used in both North Africa against the British and on the Eastern Front against the Soviet Union.

The Panzer II was supplanted by the Panzer III and IV by 1940/1941. Thereafter, it was used to great effect as a reconnaissance tank. By the end of 1942, it had been largely removed from front line service and it was use

Continuing the conventional design of the Ausf. C, the Ausf. F was designed as a reconnaissance tank and served in the same role as the earlier models. The superstructure front was made from a single piece of armor plate with a redesigned visor. Also, a dummy visor was placed next to it to reduce the number of anti-tank rifle bullets hitting the real visor. The hull was redesigned with a flat 35 mm plate on its front, and the armor of the superstructure and turret were built up to 30 mm on the front with 15 mm to the sides and rear. There was some minor alteration of the suspension and a new commander's cupola as well. Weight was increased to 9.5 tonnes.

524 were built from March 1941 to December 1942 as the final major tank version of the Panzer II series.d for training and on secondary fronts.

The turrets of the then obsolete PzKpfw I's and PzKpfw II's were reused as gun turrets on specially built defensive bunkers, particularly on the Atlantic Wall. Production of the tank itself ceased by 1943, but its chassis remained in use as the basis of several other armored vehicles, chiefly self-propelled artillery and tank destroyers such as the Wespe and Marder II.

Tamiya is an older prolific model company based in Shizuoka City, Japan. They make all manner of model subjects in the popular modeling scales.

This kit comes in a shrink-wrapped tray and lid type box.
The box art shows the tank against one of Tamiya’s signature all white backgrounds that they use on all their model kits.

The tank is overall dark-tan with a large red letter R outlined in white on the sides of the turret in the center between a yellow division logo and a white palm tree and swastika logo, which is repeated on the right front of the hull.

A small black German cross outlined in white is on the hull sides. A commander is looking out of the upper turret hatch. He is holding a pair of binoculars. He wears a soft cloth billed cap with goggles slung over the bill. Four German infantrymen are advancing beside the tank. All of them are wearing Afrika Korps uniforms.

One side panel has a small color repeat of the box art, followed by the history of the tank in Japanese and illustrations of German steel helmet decals.

No kit numbers are shown for these 5 and the box arts all have scenic backgrounds and not the Tamiya usual all-white. Theseare followed by MADE IN JAPAN.
WHAT’S IN THE BOX:

This kit contains 4 tan parts trees in 2 stapled-shut cello bags, a loose tan hull tub and hull roof part, black vinyl treads, black vinyl poly-caps, the decal sheet and the instructions. The treads, decal and poly-caps are in one of the cello bags.

The instructions consist of a single sheet that is printed on both sides and accordion-folded to fit the box. It is 20 ½” long and 7 ¼” wide.

The face side begins with the history of the tank in English, followed by illustrations of a map of North Africa, a German pith helmet, steel helmet decals, soft peaked caps and uniform insignia for Afrika Korps.

The back side of the sheet has 5 assembly steps on it and parts trees illustrations. The bottom of the page has a black and white photo of the tank and the figures built into a diorama with a Kubelwagen and 2 other German tanks. Tamiya’s street address in Shizuoka City, Japan is shown, followed by PRINTED IN JAPAN.

A second sheet that is 8” x 10” and printed on both sides has full color illustrations on it’s face side. These are

profiles showing the tank in overall Panzer-grey and overall earth-yellow above a 4-view that is a base of earth-yellow with dark-green spots.

The back side has decal application and painting instructions in Japanese only, with 4 side profile line-drawings showing where markings go. Unfortunately, the text here is in Japanese only.

The 1st tan parts tree holds the parts of the 4 infantrymen and their equipment. (19 parts) 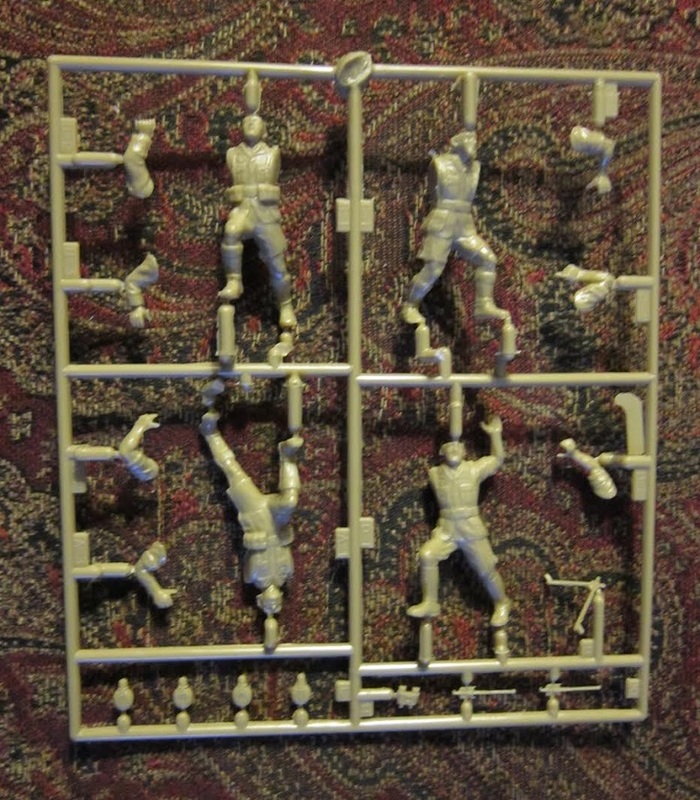 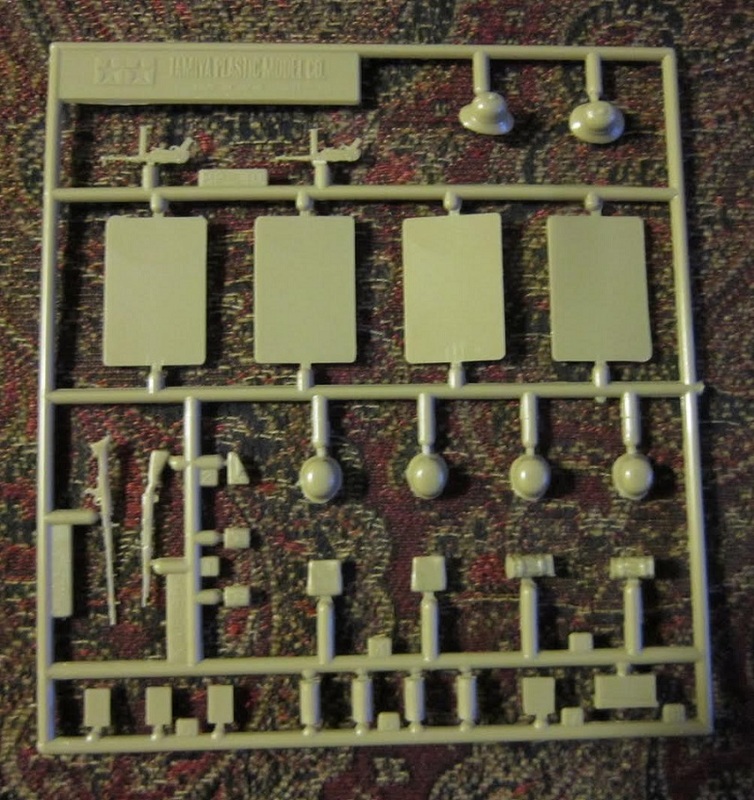 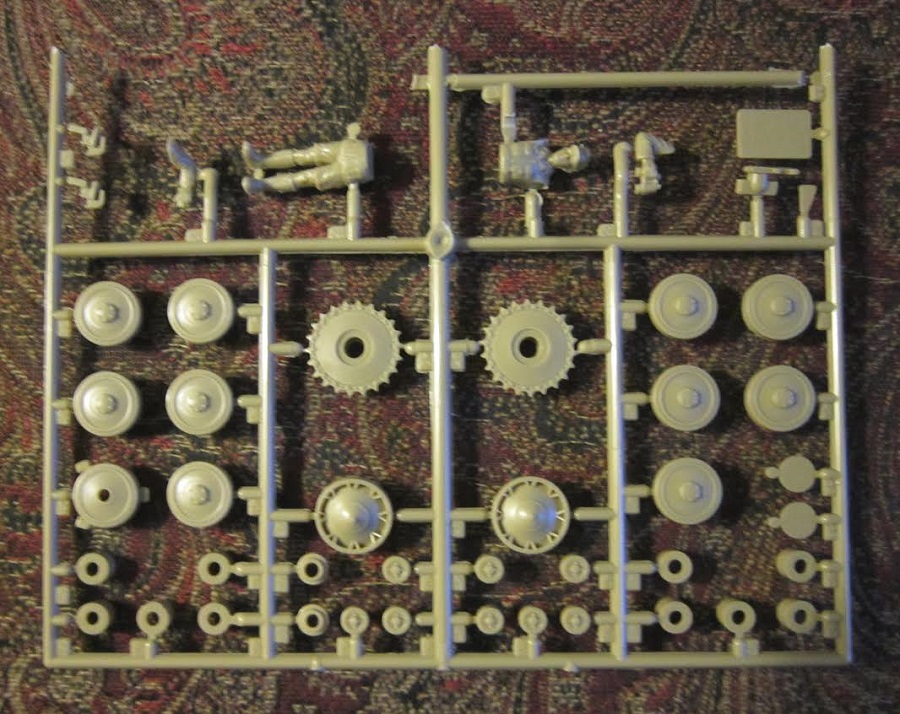 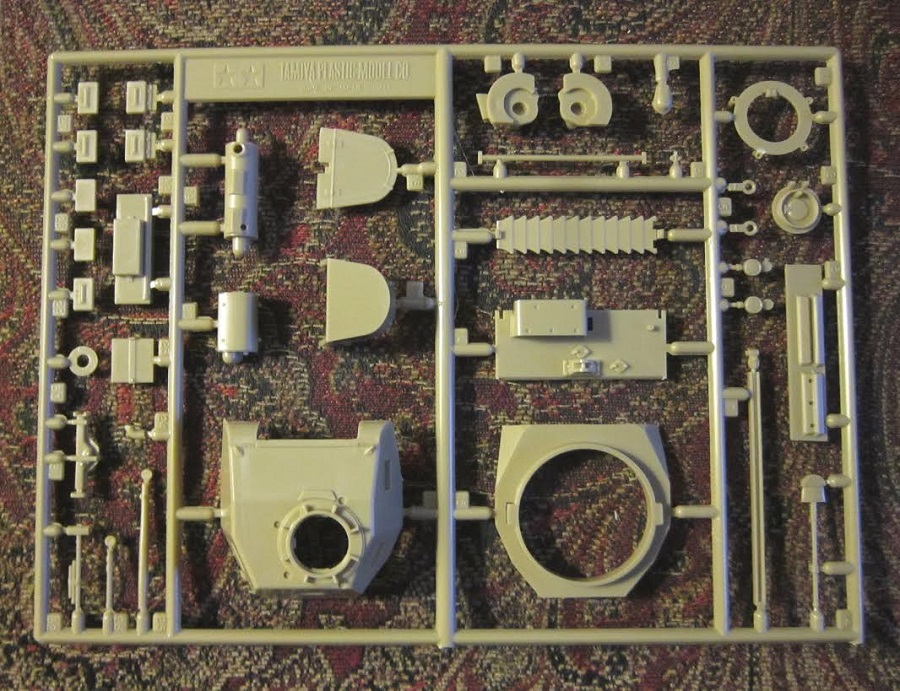 The single tan hull tub and hull roof parts are next.
This kit was also marketed by Tamiya as a motorized one. The hull tub has motorization holds in it to putty up. 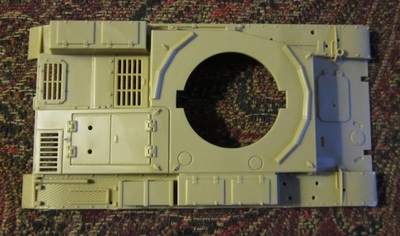 The black vinyl treads are in 2 long runs. These are the older type that have to be heat-riveted into loops and not the newer glueable type.

The black vinyl tree of poly-caps holds 18 of the caps.
There are no clear parts nor any interior details in the kit. 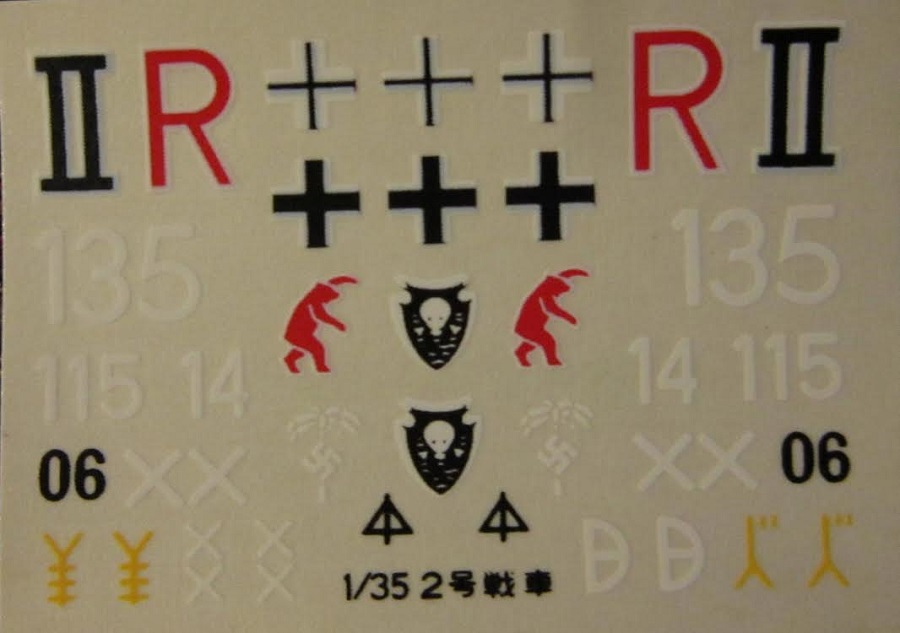 This is a nice kit. It is state of the art for 45 years ago but not bad. Recommended.
Kit was courtesy of my wallet in the 70’s