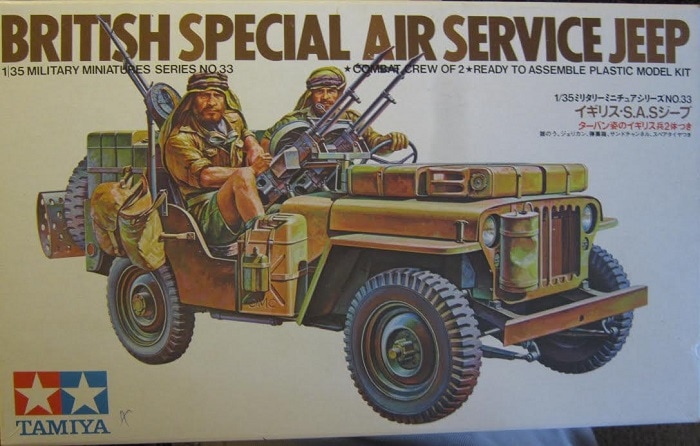 Military Miniatures series No. 33
Kit no. MM133
By Ray Mehlberger

I paid $5.15 for my kit years ago according to the purchasing tape still in the box, but heaven only knows where that was.
​HISTORY:

It was the night of 26th July 1942. The runway was brightly lit by the moon. The German field airport at Sidi Ennich was in activity as usual. The moon dissapeared behind the clouds. The light of a bomber whicfh was just going to land there searched for the runway.

The night wore on silently as if it had not been in war time. It was quite unbelievable that the German bse located far away from the front was on the brink of serious disaster.

There was no feeling of unrest. Raising a dry dust, the wheels of the bomber touched the ground, when heavy machine guns suddenly produced deafening noises and car engines started roaring.
The runway ws bolown by a black violent gust and thrown into disorder. The S.A.S., under the command of David Sirling started a surprise attack. They had come here from beyond the sear of desert tens of miles away.

Sid ennich was one of the most important airfields for Rommel.

There were a large number of planes: Stukas, Junker Ju-52's, Heinkels - nearly half of Rommel's planes.

Firing their machine guns, 18 jeeps in close formation slashed their way through the runway. German planes burst into flame one after another and their fuell tanks blew up. The flames reddened the sky over Sidi ennich and tens of German planes mercilessly destroyed were left on the ground.

The S.A.S. is short for Special Air Service. This was a special service unit organized in 1941 by young British officer David Stirling and showed activity in the desert of North Africa.

The only one mission of the S.A.S. was to weaken enemy lines and harassing the rear. The S.A.S. made elusive movements. They moved beyhond the desert stretching for hundreds of miles and attacked the enemy at unexpected times in unexpected ways. They even parachuted at night.

It was reported that some military establishments and airfields of the Germans located far in the rear were in constant fear and had to strain every nerve at all times.

It was never easy for the S.A.S. to run across the desert stretching for hundreds of miles. The severe nature of the desert rejected men positively and was full of dangers to life.

Once a sandstorm broke, men had to lie flat on the ground and wait in the sand until it blew over. Epidemics and poisonous insects were another menace to men. They often inflicted a death blow to those who were weakened by the severe nature.

Neeless to say, water was priceless in the desert. Even when a fountain was found, its water was sometimes not fit to drink, because it was badly contaminated by the rotten bodies of soldiers and animals that wandered around in search of water and died there.

In addition, the formidable enemy, i.e. the German Afika Korps and the Italian forces, was on the watch for the S.A.S. Naturally, the S.A.S. was consisted  of only well-chosen members. Having a strong body hardened by severe training and actual fightiing a well as an indomitable spirit, each of them was a real professional of desert warfare. It was said that the S.A.S. compared favorably with an armoured brigade in ablillity
.
It was the Jeep that the S.A.S. used as their main means of transport. The Chevrolet 30 CWT 3-ton truck was used at the initial stage of the war before the Jeep appeared in the battlefield  and also at the later stage mainly for transport. Although inferior to the Chevrolet truck in loading capacity, the Jeep with superior cross-country ability was best suited for the mission of the S.A.S. In order to bear up and survive under the severe nature of the desert, they taxed their ingenuity in their Jeeps in various ways.

Water was priceless in the desert. If its water-cooled engine overheated, the Jeep would come to a standstill in the sands and priceless water in the radiator would evaporate into dry air for nothing. It was very difficult to obtain water for the radiator. Thus, they cut off all but two front grille members to facilitate air intake and obtain higher cooling efficiency.

To the front of the grille they fixed a small cylindrical can, which was connected to the radiator by a hose. This was to avoid the wasteful use of priceless water. The can contained some water, and the radiator boiled and evaporating would pass through the hose, enter the can, being cooled there and then return to the radiator again. This device was called a condenser.

A sand guard was fixed to the carborator to prevent sand from entering the engine. The windscreen was removed to avoid the reflection of sunlight. The Jeep running across the pathless desert was like a smll boat sailing on the ocean. A move in the wrong direction meant death.

To find their bearings, they fixed a device called a Sun Compass on the instrument panel. It indicated direction by the position of the shadow of  piano wire in the center cast by the sun on the face of a dial marked with bearings. The simple device was very useful while the sun shined in the sky.

They also used a theodolic to find their bearings more accurately. Sand-channels were also indespensible to the Jeep in the desert. They were U-shaped iron plates of bout 1.5m in length. When the Jeep was caught in the sands, they were put under the wheels so that it could move easily.

A number of tanks and leather-bags containing water to drink and spare fuel tanks were mounted on the bonnet, rear, sides and other possible parts of the body. A camouflage net to conceal the vehicle from the enemy and a map were also necessary items.

The small vehicle also carried all the necessaries of life such as sleeping bags, blankets and food. Each vehicle of the S.A.S. was equipped with all such necessary items, but in no case acted independently. To provide against dangers and contingencies, they always acted in a group of at least two or three vehicles.

A Browinging machine gun and a single or twin Vickers "K" guns were mounted usually on the scuttle and rear of the body, either of them being mounted additionally on the side of some vehicles as a third gun. Schmeissers, Lugers etc. and machine gun magazines were put close at hand. Naturally, the S.A.S. fully used such arms captured from the Germans.

The members of the S.A.S. wored a shirt with short sleeves, knee breeches, duffel coat, aviation garment, turban etc., according to their preference. The armament and equipment of the Jeeps also varied according to the purpose of operations and member's preference. There were no vehicles that carried the same armament and equipment in the same way. They looked as if they were put on the vehicle in a disorderly manner, but in fact they were arranged in the most reasonable manner with easiness in use in mind.

This would be the combined wisdom of those who had to fight under the unfavourable conditions of the desert.
THE KIT:

This kit cam in a shrink-wrapp tray and lid type box.

The box art shows a Jeep with a 2-man British S.A.S. crew. It is overall light tan with no markings. It has jerry cans on the hood, sides and rear and a canvas bag and canteen slung on its side. It mounts 3 Vickers machine guns.

The scene is posed against one of Tamiya's signature all white backgrounds that they use for most of their kits box arts.

One side panel repeats the box art smaller in color in the center of some Japanese text that I think is probably the history of the vehicle.

The other side panel of the box has 3 color box arts of other kits that Tamiya manufactures: a German 88 mm Gun Flak 36/37, a U.S. Jeep Willys MB and a German Sd.Kfz. 2 Kleines Kettenkraftrad.
​No kit numbers are supplied and I assume they are all to 35th scale.

This kit was made in Japan.
​WHAT'S IN THE BOX:

The kit contains 3 light-tan trees in a stapled-shut cello bag and the instructions.

It is all in Japanese, but a friend of mine sent me his English instructions for this kit after he was through using them to build his S.A.S. Jeep.

Page 1 of the instructions begins with 2 black and white photos of actual S.A.S. Jeeps over the history of the vehicle.

Down the left side of the page is a listing of the light and heavy equipment items that were carried by S.A.S. Jeeps, over a black and white photo of a real Jeep's chassis construction.

The bottom of the page has the first assembly instruction

Page 3 to the top of page 5 give a grand total of 10 assembly steps. There is a black and white photo of the grille of a real S.A.S. Jeep ahsown at the bottom of page 5. There is also a illustration of the Jeep to be painted in dark-yellow with a weathering color in patches (we are not told what that weathering color is ???)

Down the left side of the page is a illustrations of the fighting equipment used on the Jeep and a list of suggested paint colors to use.

Page 6 has 2 illustrations showing the vehicle all the way around and with names with arrows pointing to each piece of equipment.

The bottom of the page has a black and white photos of actual S.A.S. Jeeps and their crews.
There are no parts trees illustrations in the instructions. However, parts trees have number tabs next to the parts on them, but trees are not alphabetized.

There are no clear parts in the kit, as like said in the history..S.A.S. Jeeps removed the windshield. 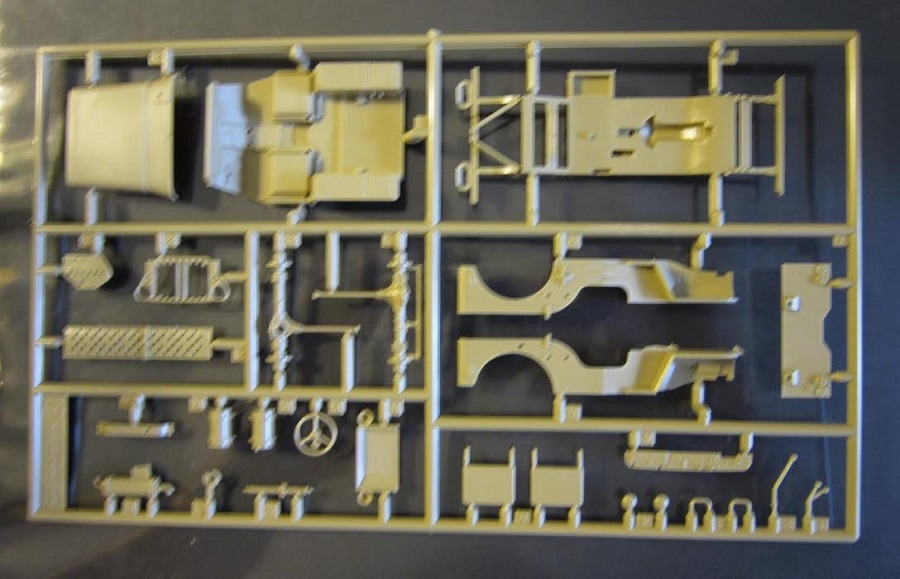 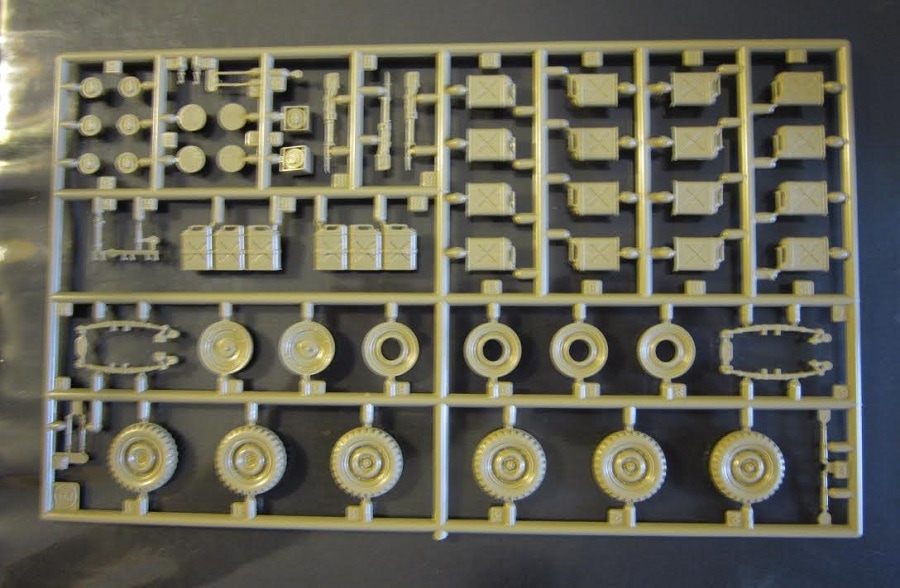 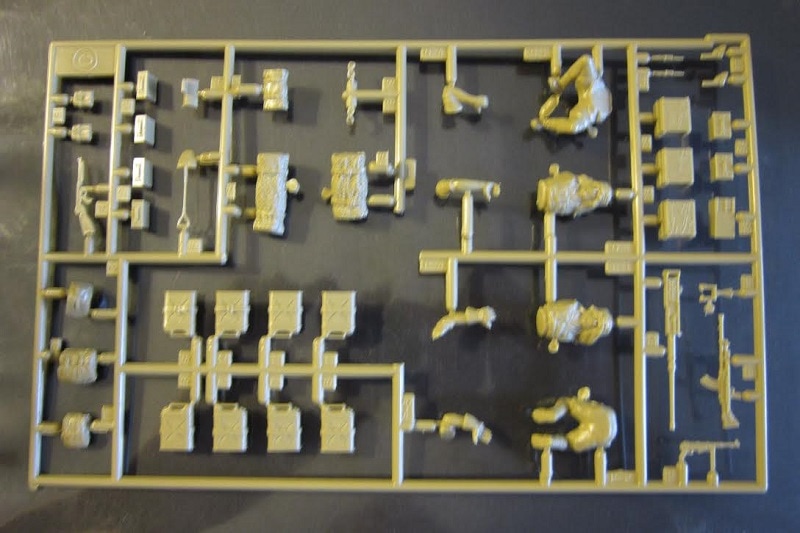 ​There is a small 4 page catalog showing many of Tamiyas kits that they manufacture included. 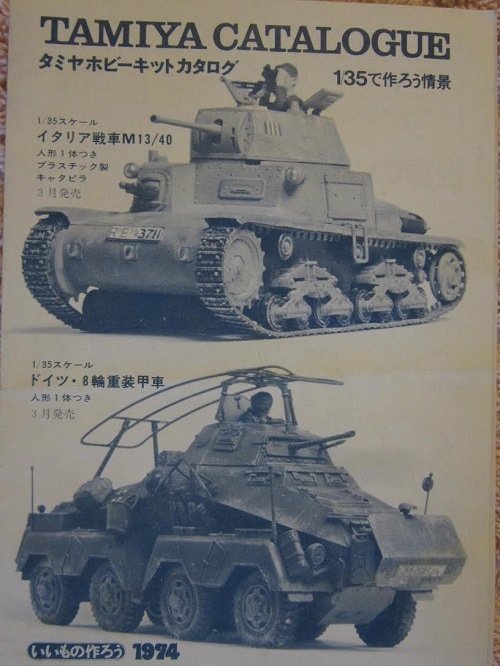 I bought 2 sets of Squadron brand Jerry cans. Set no. 3. These each contain 8 Jerry cans. I may add these to this kit when I build it, but Tamiya's Jerry cans are very well detailed and there are plenty of them in this kit.

So, the Squadron ones may wind up gracing some other kit of mine. 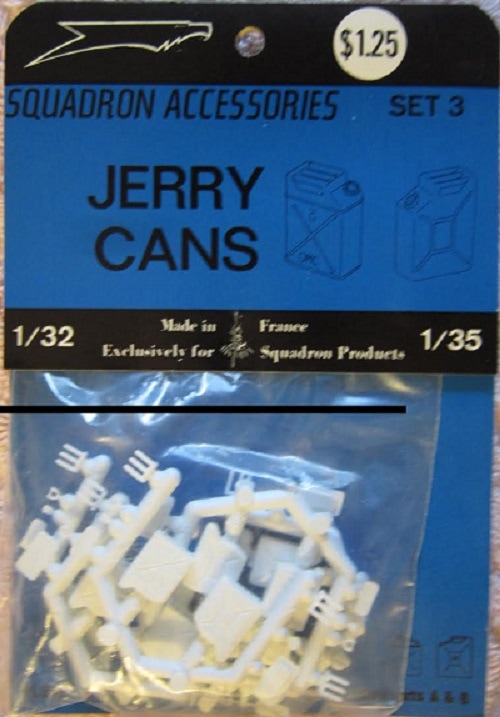 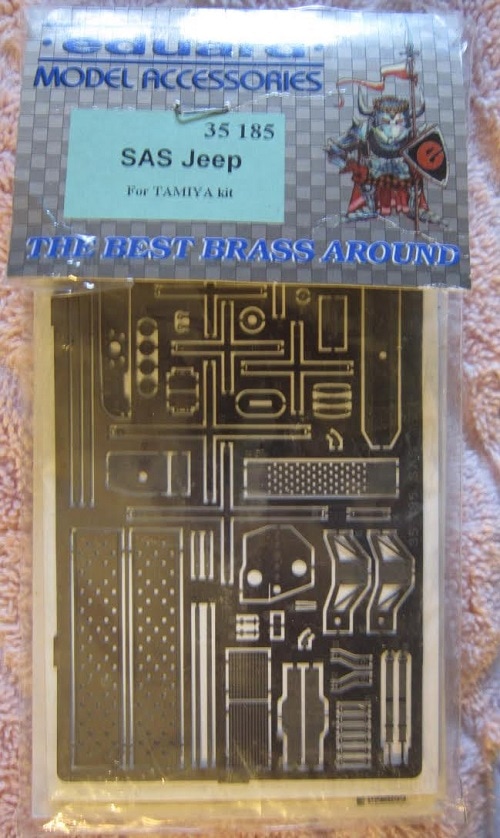