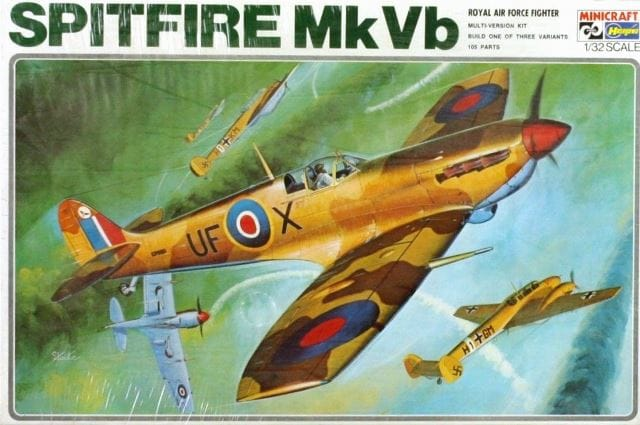 My kit has a copyright date of 1978 and is out of production.

I paid $7.95 for my kit back in the 70's at a local hobby shop that went out of business, according to the price sticker still in the box.
HISTORY:

Doubtless, the most famous British fighter of all time, if not the most familiar of all British aircraft, is the graceful Supermarine Spitfire. Born in 1934, when the threat of another World War was rumbling in the distance, the Spitfire was available in effective numbers when the turmoil began.

Basically, designed as a defensive fighting machine, the Spitfire was sturdy and maneuverable, yet light in weight. Its performance during the Battle of Britain won everlasting acclaim as it proved more than a match for the German aggressors. However, as with any such machine, the remarkable British fighter was subjected to continuing refinements to improve its abilities as the time of war changed.

It was the Spitfire Mk.I which earned such an endearing place in the hearts of the Britons, but a greatly-improved version, the Mk.V, was just entering service at the end of the notorious "Battle". This model was powered by a Rolls Royce Merlin engine offering 440 hp more than the earlier models. At first, the Mk.V carried the same eight machine gun armament of the Mk. I, but as production progressed the armament was changed to four machine guns and two 20 mm cannons.

The success of the Mk.V was such that many of the earlier Spitfires were upgraded to the Mk.V standards.

The Spitfire Mk.V could be found in a wide range of international markings, as over five-hundred V's were sent to Russia, Portugal, Turkey, Egypt and the type was operated by several American squadrons. In addition to these, the Commonwealth nations of Australia, New Zealand and South Africa flew the nimble fighter.

As the requirements of the war changed, the Mk.V was altered for use as a ground-support fighter. The characteristic pointed wing tips were replaced by stubby caps to increase the wing-loading and improve low level maneuverability. In this role, the Mk.V could carry one 500 lb bomb, or a pair of 250 lb bombs.

Spitfires used in the African campaigns were equipped with large filters to prevent the desert sand from being sucked into the carburetor and damaging the cylinders. These filters gave a unique appearance to the slim Spitfire, but were very effective in reducing excessive engine wear and damage.

By the conclusion of Spitfire production, a total of 6,479 Mk.V's had been built, comprising nearly one-third of all Spitfires constructed. The Mk.V existed in three versions, the Mk.Va, Mk.Vb, and Mk.Vc.

Hasegawa is a prolific model company based in Shizuoka, Japan. They are imported and distributed by Minicraft who is base in Torrance, CA.

The Spitfire in the foreground is in a wave pattern of dark earth (FS 30118) and middle stone (FS 30266) over at azure blue undercarriage (FS 35231). It carries the black fuselage code outlined in yellow of UF roundel X, with a small black serial no. EP689 behind the code. It has blue, white and red vertical bars on the rudder with a white circle with a winged sword on it at the tip of the rudder. It has clipped wing tips.

The second Spitfire behind it is in a turn and only showing its azure blue undercarriage.

The nearest Bf-110 is dark green over a light-blue undercarriage with a white fuselage band and black fuselage code of H1 + GM.

The second Bf-110 is in the same colors with black fuselage code H1 + KM.

The third Bf-110 also is in the same colors with black fuselage code H1 + FM.

One side panel of the box has a color side profile of a Spitfire in  wave pattern of ocean gray (FS 20440) and dark green (FS 34096) over medium sea gray (FS 36440) undercarriage. It has a sky or duck egg green fuselage band (FS 34424) and a fuselage code in white of A roundel RF and a black serial no. AB183 behind the code. It has a small Polish checkerboard insignia on the sides of the nose and another Polish logo under the cockpit.

This is followed by a short history of the Spitfire.

​The other side panel shows Hasegawa's' address in Shizuoka, Japan and Minicraft's address in Torrance, CA, over packaged and distributed by Minicraft and printing done in the USA. This is followed by 4 color box arts of other aircraft kits that Hasegawa makes: a Messerschmitt Bf-109E, a A6M5 Zero, a P-51D Mustang and a Focke Wulf Fw-190. No kit numbers are shown for these and I assume they are all to 1/32nd scale.

This kit contains 3 light-tan trees, a clear tree and 2 decal sheets in a sealed clear cello bag and the instructions.

The instructions consist of of 4 sheets printed on both sides that are in 17" x 8 1/2" page format, stapled once at the top to form a booklet of 8 pages.

Page 1 begins with a grainy black and white photo of the model made up in the box art scheme, over the history of the Spitfire MK.V and Minicaft's address in Torrance, CA.

Page 2 through 5 give a grand total of 15 assembly steps, accompanied by black and white photos of the assemblies on the model.

2. The side panel scheme (also described above)

Page 8 has the parts trees illustrations, with the names of all the parts down the right side of the page.

Part trees are alphabetized but have no part number tabs next to the parts on the trees. This means constant checking the parts trees illustrations to get the right parts for each assembly. Bad move Hasegawa! 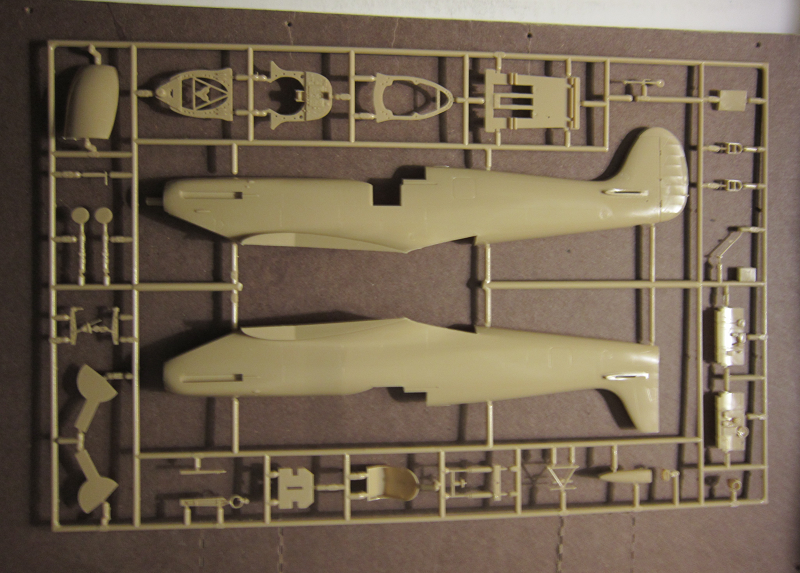 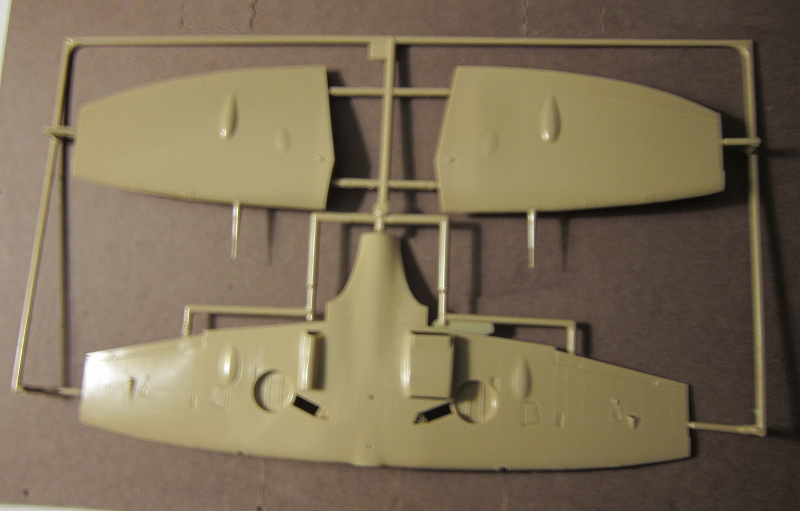 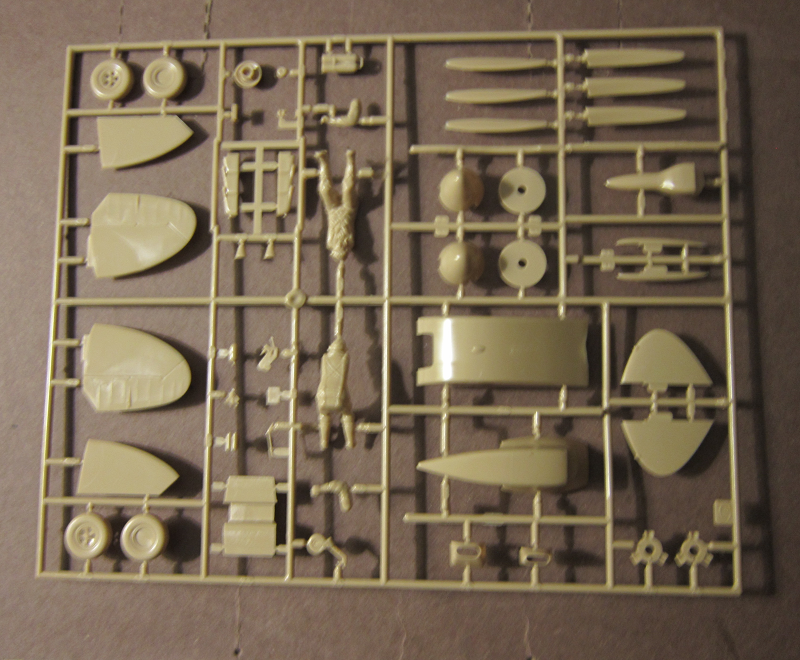 There are 2 decal sheets in the kit. The larger one carries the British roundels and rudder tricolors (2 different styles). 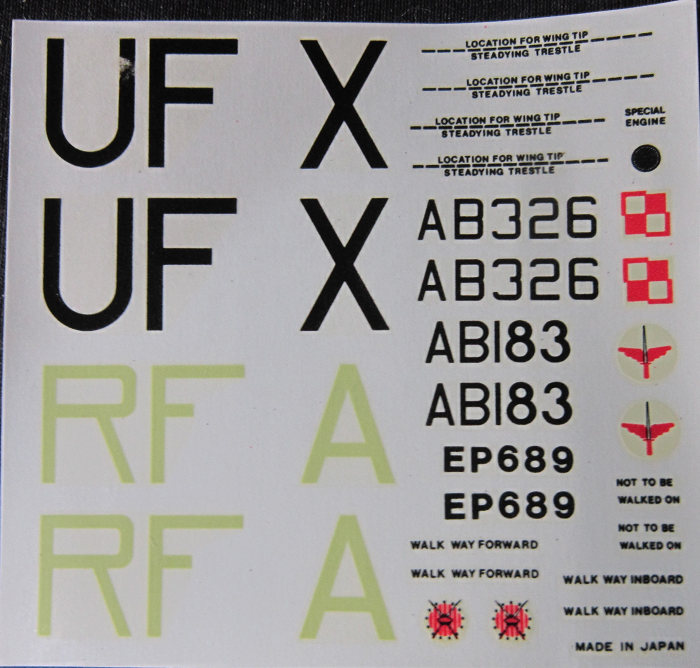 ​The parts have nice raised detail. However, all flaps are molded solid. The trees fit the box tight in all 4 directions.