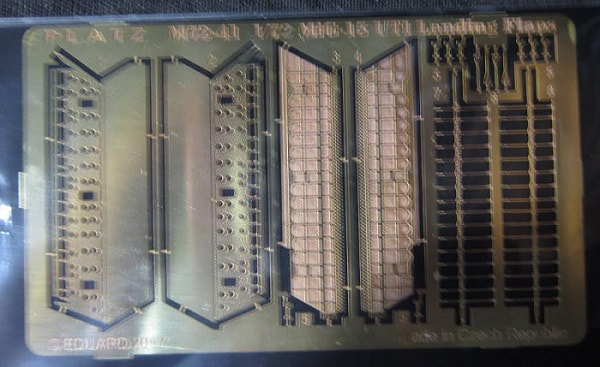 This brass PE fret comes in a sealed cello bag with card at the top with a hole in it to allow the product to be displayed on a hook at a hobby shop.

The instructions consist of a single sheet in 8 1/4" x 11 3/4" format printed on one side and folded several times to fit the cello bag.

The instructions show 5 assembly drawings that are not numbered. Platz's street address in Shizuoka City, Japan, it's telephone and FAX numbers are provided as well as its web address.

Eduard's name is shown here too. The PE set is a cooperation between the two companies, because the fret has "2017 Eduard & Made in the Czech Republic" etched into it.

However, I must say that the smaller parts are not much wider than a human hair and will be really difficult to handle and glue to the model without first glueing them to your fingers.

The larger parts are very useful.