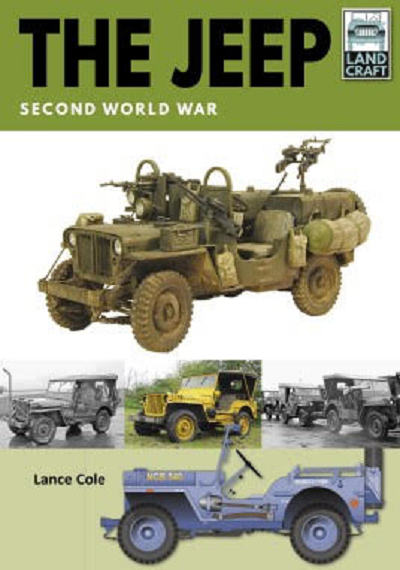 The WWII Jeep was one of the most famous and influential military vehicles of all time, and over 600,000 were produced.

It served with all the Allied forces during the war on every front and it has been the inspiration behind the design of light, versatile, rugged military and civilian vehicles ever since.

In this first volume in Pen & Sword Land Craft series, Lance Cole traces the design, development and manufacturing history of the Jeep and describes its operational role within the Allied armies.

The cover art shows a color photo of Tamiya's 1/35th scale kit no. 35033, built up as a British "Desert Rats" Jeep. It is overall olive-drab with no markings.

Below it on the left is a black and white photo of a Jeep with a wire cutter bar mounted on the front bumper. It too is overall olive-drab with a white serial no. 209495387 S stenciled on the side of the hood and a small white star on rear end of the sides.

On the left is a black and white photo of a convoy of 3 Jeeps. They are all olive-drab. The lead one has a .50 caliber machine gun on a mount outside the passenger side with a canvas cover on it. It has the white serial no. 20688934-S stenciled on the sides of the hood.

At the bottom of the cover art is a side view illustration of a Navy Jeep that is overall-blue. With a yellow serial no. NCB 540 on the sides of the hood. Small white tire pressures on the bumpers above the wheels and a white SEABEES CORP above the rear fender.

The back cover of the book has a color photo of a British Jeep at the top, that has a British flag mounted on its fender, a large white star on top of its hood and large white serial no. M2026297 on the sides of the hood. It has a yellow circle with a black horizontal bar across its center and black number 1 above and below the bar.

The next color photo below it is of a Willys MB Jeep model built up from the Tamiya 1/35th scale kit no, 35033, by Przemek Morek.

Third photo down is a color one of the nose of a Jeep that is overall olive-drab, with white serial no. 101 AB on the left side of the front bumper, white 506-I star in the center and stenciled yellow C-2 on the right side. It has a color illustration of cards spread out with STRAIGHT FLUSH in yellow under the passenger side windshield.

This is a post D-Day Recce Jeep seen on the move and fully equipped in authentic "Normandy" specification as a modern era tribute to the Jeep and the men that served.

At the bottom is a color side view of Jeep, that is also overall olive-drab with a white stenciled serial no. U.S.A over 20915794 S on the sides of the hood and a white tire pressure marking over the rear fender.

This Jeep is said to have been used in the 1944 Burma Campaign.

The book contains 75 black and white pictures of Jeeps, which include the prototypes, all the variants and the British Austin Champ Jeep.

There is a copy of a illustration of the Jeep's chassis out of a maintenance manual, 14 of the photos are the walk-around type showing the interior, dashboard and data plaques inside Jeeps.

There are nine 5-view color profiles of Jeeps in the book.

2. A Soviet Lend-lease Jeep that is overall olive-drab. The caption says the only marking is a red star, but I fail to see that illustrated anywhere on the profiles of it. It has the cold-climate "Arctic" type steel hardtop with side windows and doors.

3. A all yellow Jeep marked for airfield rescue operations specifications. It was deployed in East Anglia 1943-44. It has a black serial no. U.S.A. over 2916670 S on the sides of the hood and a large black star inside a ring on top of the hood.

4. A Jeep that is overall olive-drab with a white serial no. U.S.A. over 20495387 S on the sides of the hood a large white star in a circle on top of the hood. It has a wire cutter mounted on the front bumper that has the lower part of it painted yellow. It was with post June 1944, 2nd Reconnaissance Group at Normandy. It has light-weight "agile" minimal equipment specifications.

5. The Jeep that is on the bottom of the front cover of the book, that is all blue. It says here that it could also appear as pale grey and was a late-war U.S.N. Shore Based HQ Jeep. The front view shows an American flag under the passenger side windshield and a yellow circle with a black bar across its center with no. 2 above and below it.

6. A British Jeep that is overall olive-drab with a white serial no. M771410 on the sides of the hood and repeated twice on top of the grey painted hood with a large white circled star. The serial no. is repeated on the back again, with a logo of a white knight on horseback on a square on the left side of the rear and a square that is diagonally divided into red and yellow with a white 44 on it on the right side of the rear. It has a spare wheel mounted on the front with a yellow triangle with a white 25 in the center on it.

7. A Jeep that is also overall olive-drab and has white serial no. U.S.A. over 20815794 S on the sides of the hood  and white star in a circle on top of the hood. It has white serial no. ATC star ICD underneath the passenger side windshield and 1350-7 under the driver's windshield. It was with the India China Division for 1944 Burma Campaign. It has canvas side panels fitted, similar to "Flying Tigers" marked unit Jeeps.

8: A Jeep also overall olive-drab. Shown in 1944-1945 with a body-mounted mini-turret with heavy-calibre weapon on floor mounting, used in Ardennes winter campaign against German incursion. It has a front-mounted armor plate. One of two types of body armor "towers" were offered. It was also used by Soviet forces. It has white serial no. U.S.A. 20343559 on the sides of the hood and a white star on the front-mounted armor plate.

9. A Jeep that is overall light-buff colored with the British Long-Range Desert Group (LRDG) in 1942-1943, with a multi-calibre double-armament in the cabin and 10 long-range fuel tanks on the body. It has a radiator condenser unit and grill modifications. It carries no markings at all.

There is a whole section in the center of the book showing models of Jeeps built up.

The first model is of a SAS British L. Detachment "Desert Rats" Jeep built from the Tamiya 1/35th scale kit no. 35033 by Przemek Marek and shown on the front cover of the book too. There are 10 walk-around type color photos of this model in a diorama with figures.

The second model is also of a SAS "Command Car" on the Western Front by Brian Richardson. It is an Italeri kit that is overall olive-drab. It is alone with no figures and no markings. There are 15 walk-around photos of it.

The third model is a Willys MB Jeep shown in the Italian campaign. It is overall olive-drab and built from the same Tamiya 1/35th scale kit no. 35033 as the previous model. It is shown in a diorama with 2 figures. There are 13 color walk-around type photos of it. It was by Przemek Marek.

The fourth model is also a Willys MB jeep with the 5th Armoured Division, Normandy, summer 1944 by Brian Richardson. It is overall olive drab with white serial no. 20122371 on the side of the hood, a small white star on its sides, tire pressure marks on the fenders, serial no. 5 triangle 95F on the left side of the front bumper and 5V-4 on the right. It is Tamiya's 1/35th scale kit. no. 35219 kit from 1997 and done alone with no figures. There are 14 color walk-around type photos of it.

On the next page is a 3 walk-around type photos of the Dragon 1/35th scale 1/4 ton 4x4 truck with bazookas. The decal options for this are U.S. Army, 9th Infantry Divisions, 60th Infantry Regiment in the Battle for the Ardennes, Belgium 1945. It is not said the modeler's name that built this one.

Below it is a Jeep model in overall olive-drab with pale blue serial no. 20518894 on the sides of the hood and a white circled star on top of the hood. No information is given as the brand name of this kit or who built it.

The next page has 4 color walk-around type photos of Tamiya's 1/35th scale British Special Air Service Jeep and the kit's cover art, is shown with two figures in it wearing turbans. It again is not said who built this model.

Tamiya's 1/35th scale Jeep Willys MB kit shows the cover art of the kit and 13 color photos of the parts trees in the kit, over a photo of the model made up as overall olive-drab with white serial no. U.S.A. over 0491132 S stenciled on the sides of the hood.

Next page has 3 color box arts of Airfix kits. However no scale is mentioned and they may be 1/72nd ? Below them is the color box art of Italeri 1/35th scale Commando Car Jeep, kit no. 320 and a photo of the tree of figures in the kit.

The following page has 4 shots of the "Desert Rats" models described earlier, over a color photo of a Jeep as an ambulance version with white square with a red cross on the roof. No model company is mentioned for this kit. It is the usual overall olive-drab.

The inside of the back cover has 15 black and white cover arts of other Pen & Sword AFV books they publish.

This is one neat book and will be of great interest to modelers and military historians alike. Especially the built up model section and the color profiles.
Highly recommended.

I want to thank Casemate Publishing, who sent me this review sample and the folks at Pen & Sword also.

Casemate is the U.S. Distributor of Pen & Sword books and all their titles can be seen on Casemate's site at:
www.casematepublishers.com