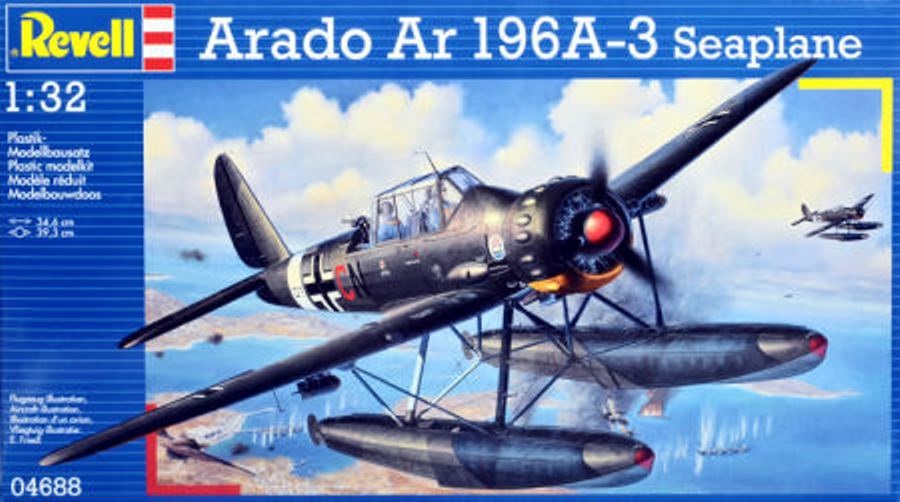 In Box Review of Revell of Germany 1/32nd scale

The Arado Ar 196 was considered the best WWII float plane. It’s sphere of operations extended from Crete via the Black Sea to the far north. In addition to coastal reconnaissance and the attacks on small shipping connected with this it was also used to attack submarines. By the summer of 1937 the first prototype of the Ar 196 was flying and the first deliveries were made in 1939.

From 1941 the actual main version of the Ar 196 – the A-3 was supplied. This series had, among other things, a three-blade adjustable propeller and better radio equipment together with more powerful defensive weapons and two SC59 50kg bombs. Most of the machines in the Ar 196A-3 series went to the coastal flying groups as well as to various naval reconnaissance groups and to the large naval units. Arado 196’s were stationed on the battleships “Tirpitz” and “Bismarck”. The Ar 196 was also used even more extensively for air/sea rescue. Up to October 1944 a total of 435 had been built.

This kit was produced by Revell of Germany. It comes in large end-opening type box.

The flaps are held shut by circles of scotch tape and there is no external shrink wrap.

The box is actually longer than the trees inside. There is a void of 5” at one end.

The box art shows 2 Ar 196A-3’s over what a coast line. There is some combat going on with 2 German  twin-engined aircraft that are diving on some shipping and a shore emplacement below, but it is not clear as to what those 2 aircraft are. Perhaps Ju-88’s?

The Ar 196A-3 in the foreground carries the marks of III./KG 100 at Kalmaki, Crete, January 1943. This is one of the two marking options provided on the kit’s decal sheet.

Because the kit was made in Germany and the ban on displaying the swastika there, there is no swastika shown on the tail of the Arado shown on the box art and no swastikas on the decal sheet.

The back of the box shows the color box arts of 5 other aircraft kits that Revell markets:

Also shown are a group of hobby paints, cements and a airbrush. One photo-etched accessory set is shown for a German destroyer class 119, (Z1/Z5) for Revell kit no. 05097.

Mention is made that the kit is a level 5 skill kit. Meaning that it is a difficult model with over 150 parts requiring a very high level of skill.

One side panel shows 6 color photos of various sections of the model made up. Next to these is listing of paints suggested to use to finish the kit and a list of the features in the kit in 4 languages, including English. Revell’s address and web site is listed here also.

The other side panel has the history of the Ar 196 in the same four languages and mention of what more is needed to complete the kit that is not included (paint and cement). The kit is suitable for modelers 13 and older. This is called out in 7 languages.

Inside the box are 13 light gray trees of parts in 5 cello bags and 1 clear parts tree in a cello. The decal sheet, instructions and a sheet of “safety advice” in 21 languages is included. The decal sheet has a frosted cover sheet included, which is intended to protect the face of the decal from scratches. However, this is floating around loose in the box and therefore is not protecting the decals.

Page 1 begins with a black and white photo of the model made up. This is followed by the history of the Ar 196 in German and English. This is followed by the notice that “The mold is manufactured by and property of Revell Gmbh & Co. KG. Illegal imitations subject to prosecution” in 9 languages. The bottom of the page has Revell’s street address in Germany, their telephone number, fax number and internet site.

Page 2 has “read before you begin” instructions in 21 languages, including English. This is followed by 5 postage stamp sized illustrations of cutting, clamping and painting parts. The bottom of the page repeats the street address etc. shown on the previous page again.

Page 3 gives explanations of international assembly symbols used throughout the instructions, in the same 21 languages.

Page 4 gives a listing of paints suggested to use to finish the kit. These colors are indicated in the assembly step drawings as pennant symbols with alphabet letters in them.

This is followed by a quality assurance statement and Revell of Germany’s street address and their street address in the UK to contact about any problems with this kit.

Page 15 gives a 4-view drawing for a painting and marking scheme for the box art subject: an aircraft with III./KG 100 at Lalamski, Crete, January 1943. It is in a wave pattern of RLM72 and RLM73 above hellblau below, with black prop blades and a red spinner. The squadron logo on the nose is a white circle with a Viking sailing ship on it.

The fuselage code is small black D1 + large red C & large black N. There is a white fuselage band that the first 2 letters are on. As already mentioned, no swastikas for the tail are provided. So, a after-market sheet of these is needed of the right size. Many stencils also appear that are provided on the decal sheet.

Page 16 also has a 4 view of the second scheme provided for in the kit. It is in the same paint job as the one based in Crete. There is a logo on the nose of a blue shield with a sea horse on it. ON the left side of the aircraft behind this logo there is a white reef with the number 100 in the center. The fuselage code is large black letters T3 + LH. This aircraft was assigned to Bordfliegergruppe 194 on board of German battle ship “Tirpitz”, Summer 1943. 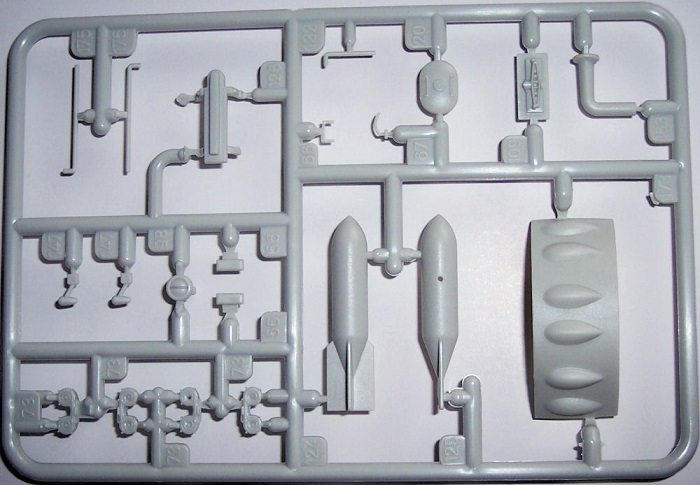 There are 2 identical medium sized light gray trees that hold the pontoon halves and their rudders etc. (10 parts per tree) 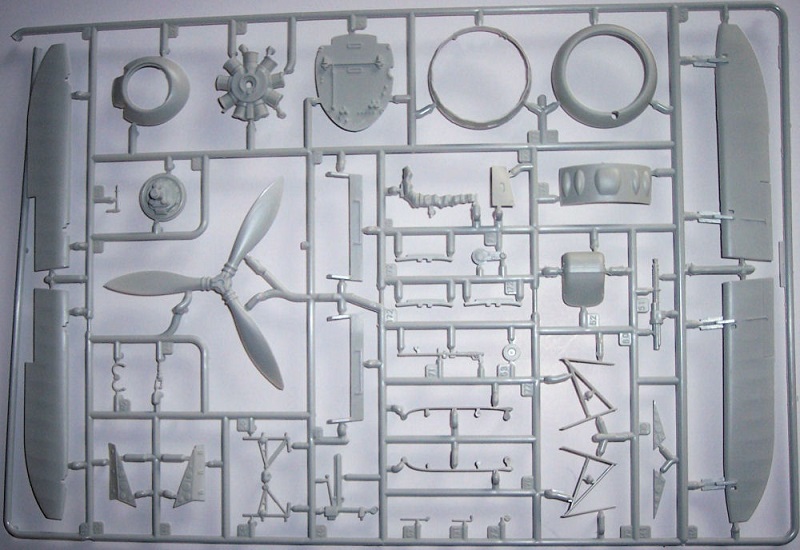 A large light gray tree holds the engine cylinders, more wing flaps, the instrument panel etc. (36 parts) The engine is built up of no less than 14 parts and is a model in itself. Therefore Revell has made an access door separate so you can pose it open to see all the excellent detail of this engine. 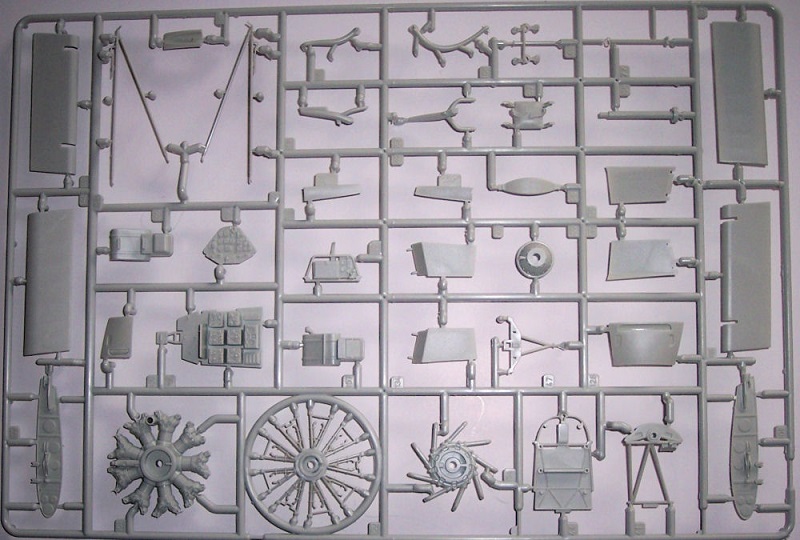 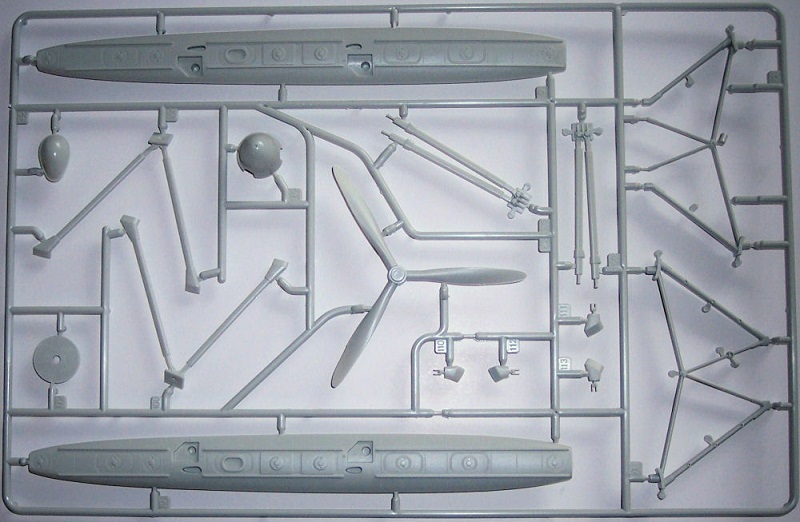 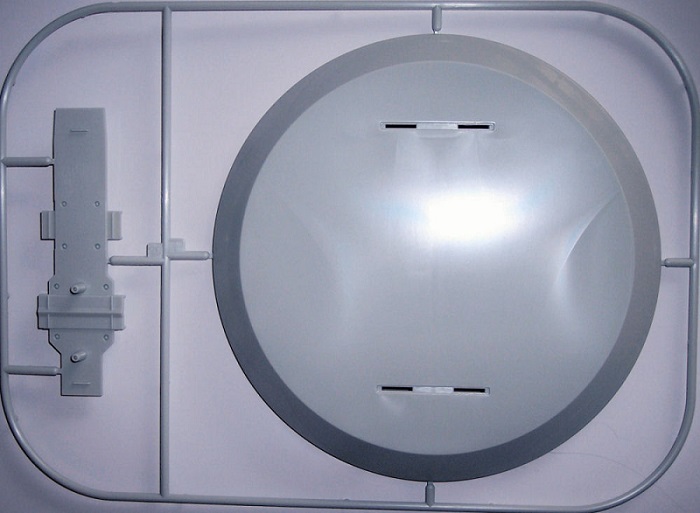 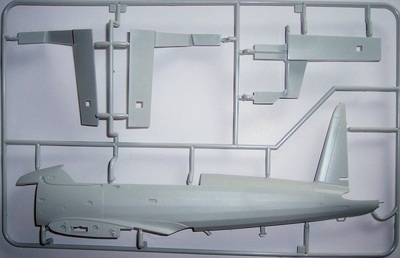 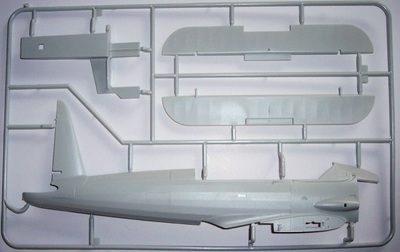 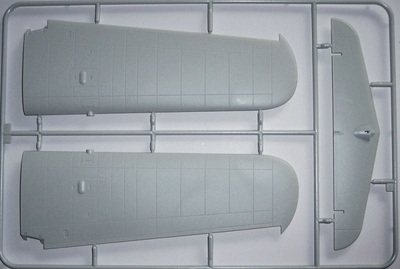 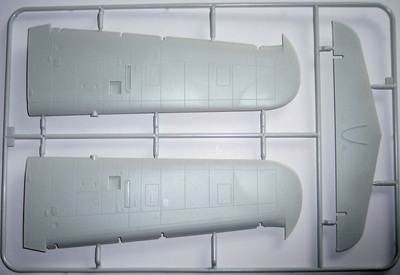 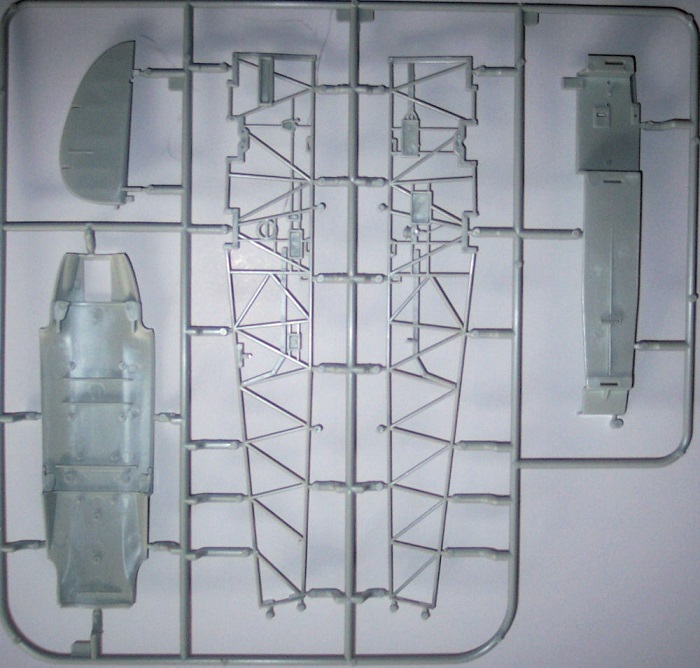 The clear parts tree holds cockpit transparancies and light lenses (16 parts) The cockpit panels are all flat and will have to be assembled into the whole shape. This will become tricky and care will have to be given to not make obvious glue lines. 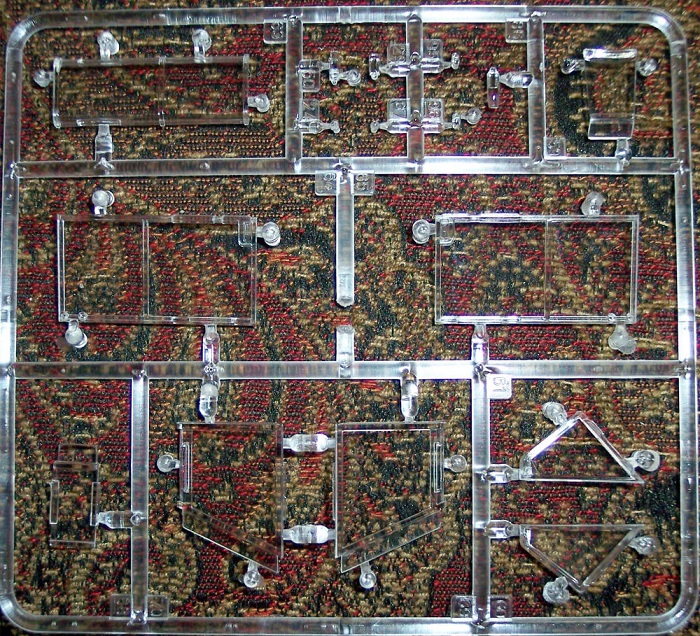 I would recommend a razor saw to remove some of the small parts, rather than a snipper pliers. Using the pliers will propably damage small parts. The molding is great, with no sinks and push out pin marks are hidden after assembly mostly. I like the seperate wing and elevator flaps and rudder, which can be repositioned and posed nicely. The cockpit interior could only be improved by adding some seat belts from tape or PE.

The decal sheet holds the markings for the two schemes discribed above, plus stencil markings.

The model can be displayed with the wings folded or deployed and with the cowling panels removed to show the great engine detail. Only some wiring added would make it better. The cockpit can also be displayed open or closed and there is the option of two different propellers, already mentioned. The round diplay base is a nice touch too.

This is one very detailed model of the Ar-196A-3. It puts to shame the earlier Italeri 1/48th scale model of the aircraft, that has quite a few inaccurate shapes.. It also beats Italeri’s price by about 10 bucks and the Trumpeter kits done in 1/32nd scale  by a lot of bucks.

I purchased my kit at a discount price at a store that was going out of businessl.