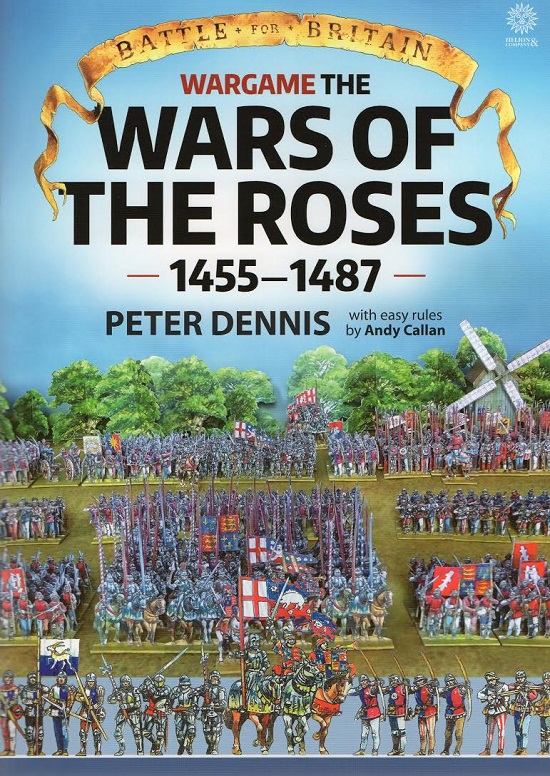 Review of Battle For Britain Series
Wargame The Wars of the Roses 1455-1487
Author: Peter Dennis, with easy rules by Andy Callan

MSRP: $29.95  copyright date 2016
​In the Battle for Britain Series, well-known historical illustrator Peter Dennis breathes life back into the 19th century paper soldier, supplying all the artwork needed to create the armies which struggled for supremacy through the British island  history. Here, the knights, men-at-arms and bowmen of England's King and rival noble families can clash again using simple rules from veteral wargamer Andy Callan.

This source book allows you to copy and make any number of colorful and durable stands of troops using traditional skills with glue and scissors.

For the game you will need a tabletop playing surface, a tape measure and a handful of dice.

It contains color illustrations of knights, boxmen, men-at-arms, cannons, trees and bushes, buildings, diorama bases etc. in paper for you to cut out and glue together to play the game.

The book includes game rules and instructions for assembling the play parts. There are two sets of cards for playing the game.

More paper soldier books are planned for the future.

Not really being my bag exactly, I cannot say too much intellegently about this book or the series.

The color work however is well done.
I want to thank the folks at Casemate (the U.S. distributor for Helion and Co.) for this review sample.