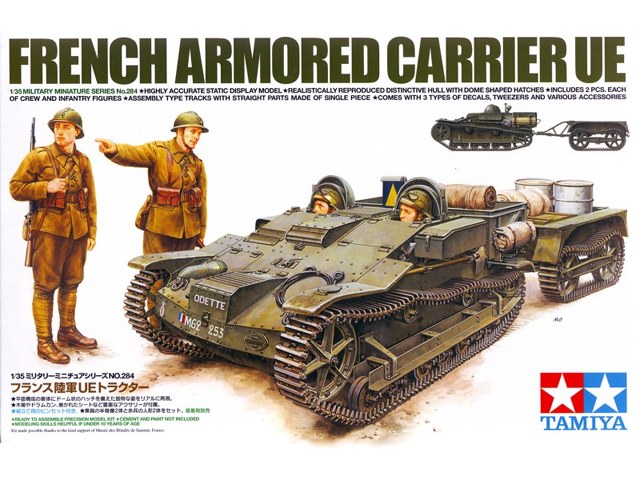 Tamiya is a prolific model company that makes all kinds of model subject in the popular scales and is based in Japan.

Years ago, I had a friend who ran a number of different businesses. He originally owned the first hobby shop in town and later was into metal grinding and other businesses. He was also an avid collector of old vehicles and guns. He had a licensed to sell guns also. In the vehicles he had things like an old fire engine, a midget race car, the body shell off the first year of a Corvette, a 1940’s sandwich vending van etc.

He heard that a farmer near Aberdeen Proving Ground in Maryland had a WWII French Renault UE (subject of this kit for sale). It had been tested at the Proving Ground during the war and he bought it from them to pull wagons etc. around his property. When it quit running, he parked it in the weeds with the two domes open and let rain pour in to rust out the floor. He also busted one tread run and a link was lost that was never found.

My friend went to Maryland with a flat bed truck, bought the UE and transported it back to Iowa to the next city to me. He started to repair it and priced a new floor at a metal foundry near Chicago.

However, the original floor had a raised pattern that he found out was too cost prohibitive to have replicated. He did have a new track link molded and also molded copies of the oval Renault manufacturers name plate on the box of the UE. 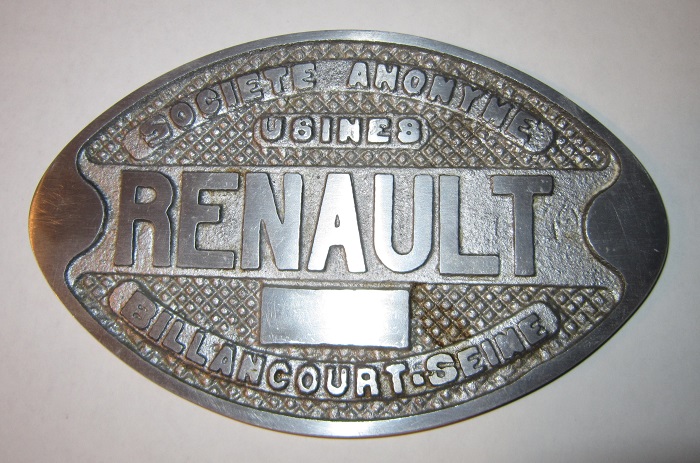 These were done in aluminum. He gave me one of these, but the original had the French serial number on it and also a stamp into the plate of an eagle with swastika and SS marks. My friend planed the surface of this copy off and erased the eagle and SS marks and the serial number….groan. I begged him for one of the copies with these insignia left on it, but he would not give me one...sigh.

Another modeling friend of mine went and measured and photographed this UE in order to get information to scratch build a model of it. This friend gave me this scratch built model shortly before he died of cancer. It has won several awards in IPMS contests. (shown here). 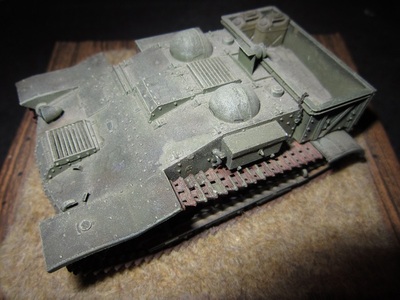 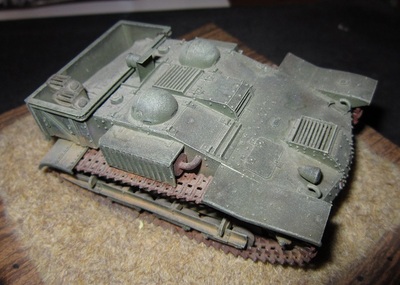 The fellow that owned this UE died of his diabetes complications shortly after having a leg amputated due to it. I lost contact with him and the next time I visited his city his shop and attached home had been raised to the ground and were gone, along with all his vehicles etc. I don’t know what became of his UE??

I never thought I would ever see any manufacturer of model kits do a Renault UE, except maybe a vacuformed one. Never one injection molded like this kit. So, I jumped at the chance to purchase mine.

The kit comes in a shrink-wrapped tray and lid type box. The box art shows a UE with a driver and co-driver in the domed hatches. They wear leather tanker helmets with goggles on them pointing the way.

The UE is in overall khaki drab and is pulling a fully tracked trailer in the same color. The trailer has a load of fuel drums in it.

The front of the UE has the white personal mark of “Odette” above a French tri-color flag followed by the white serial number M62 253. To the left of these is a yellow exploding bomb symbol with a number 1 on it. On a extended plate on the roof is a yellow triangle symbol. This was a formation sign that was shown to show that the UE was pulling the trailer.

Standing next to the UE are 2 French infantrymen. Both wear the distinctive French Steel helmets with the crown bars on them. Their uniforms are the French brown and their pants are bloused into putties with low shoes. One has his rifle slung over his shoulder and the other holds his in his left hand. One is pointing with his right arm and the other has his head turned to look in that direction.

The box art says that this kit is in Tamiya’s Military Miniature series and it is highly accurate with a distinctive and realistically produced hull with the dome shaped hatches. It includes 2 crew figures and infantry figures, assembly type tracks that are the link and length type. It has 3 decal options and a pair of tweezers included as a bonus. Some big dummy, who shall remain nameless, has lost these and cannot find them...sigh.

Paint and cement are not included. The kit was made with the kind support of the Musee des Blindes de Saumur, France.

One side panel has a full color 3-view illustration of another UE in overall khaki drab. It has the white serial no. 95213 on the front and back of it with the French tri-color flag to the left and the yellow bomb exploding bomb insignia to the far left of these on just the front. The yellow triangle is raised on the roof. Next to this is a paragraph in Japanese, MADE IN THE PHILIPPINES and Tamiya’s web address.

The other side panel has a color photo of the model made up in the box art scheme. This is next to another paragraph all in Japanese and a color illustration of the trailer load items. Tamiya’s street address in Japan is provided here also.

Modeling skills are helpful if you are under 10 years of age.

The kit contains 255 parts in olive drab plastic, 8 poly caps, the decal sheet and the instructions. There is also a bonus pair of tweezers. Parts are all nicely in cello bags.

The instructions consist of a single sheet that accordion folds out into 10 pages in 7 ½” x 11” page format.

Page 1 of the instructions begins with a black and white repeat of the box art, followed by the history of the UE in English, German, French and Japanese.

Page 2 begins with “Read before you start” instructions, CAUTIONS and a paint list recommended to use to finish the model. The bottom of the page has the first assembly step.

Page 3 through 8 give a grand total of 18 assembly steps.

Steps 14 to 17 are for the assembly of the tracked trailer and it’s cargo load.

Step 18 is the assembly of the 4 figures.

Page 9 has two 5-views of markings and painting schemes.

One is the box art subject “Odette” and the other is ser. No. 95213 already described a bove. These are both said to be series 2 types.

Page 10 has another 5-view of a series 4 type UE in the same color scheme as the first two and the serial no. white 8030.

Below this it is said that UE’s were capable of carrying up to 600 kg on their rear cargo deck and 500 kg on the tracked trailer.

Decal application instructions are then provided along with customer service information. 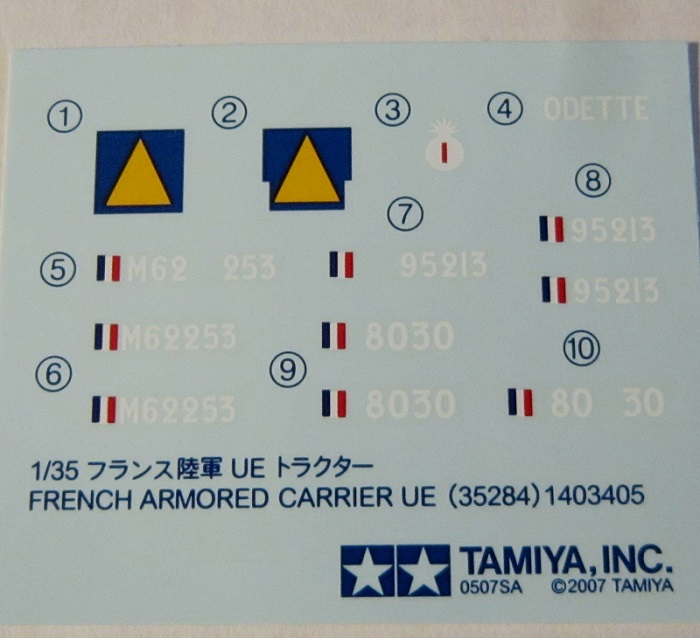 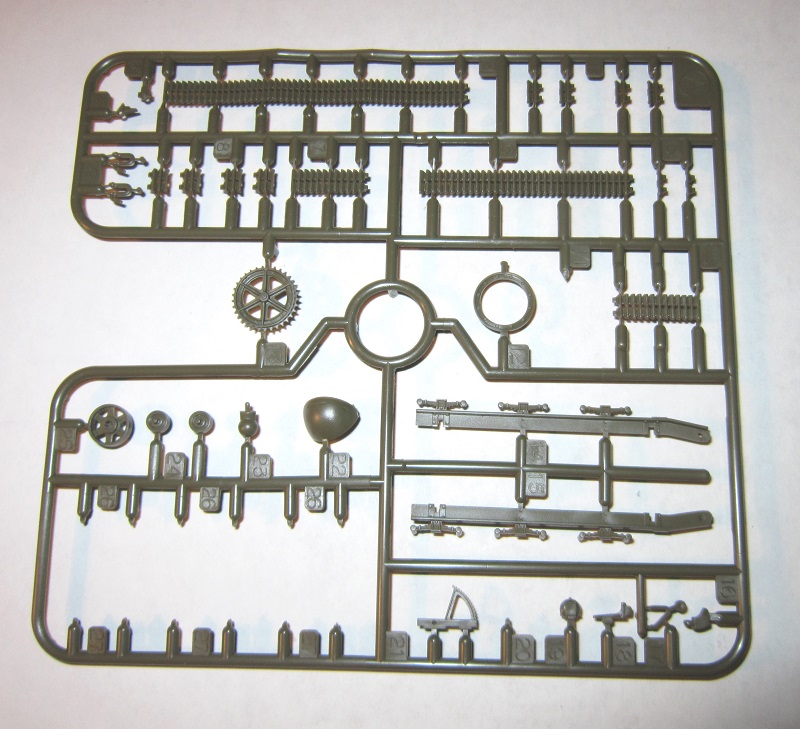 Dark green tree letter B holds all the other parts for the UE. (41 parts) 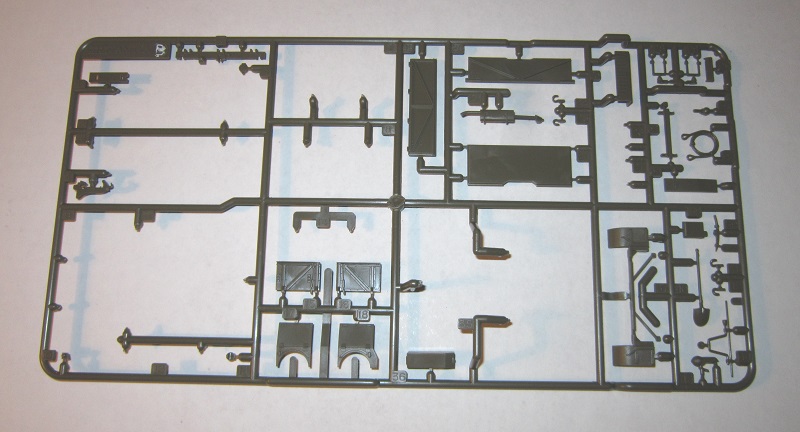 There are 2 identical dark green  letter C part trees. Each holds link and length type parts for the trailer (20 parts) 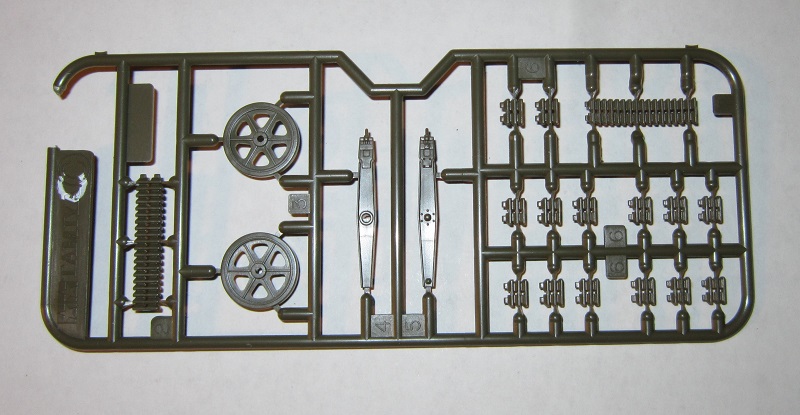 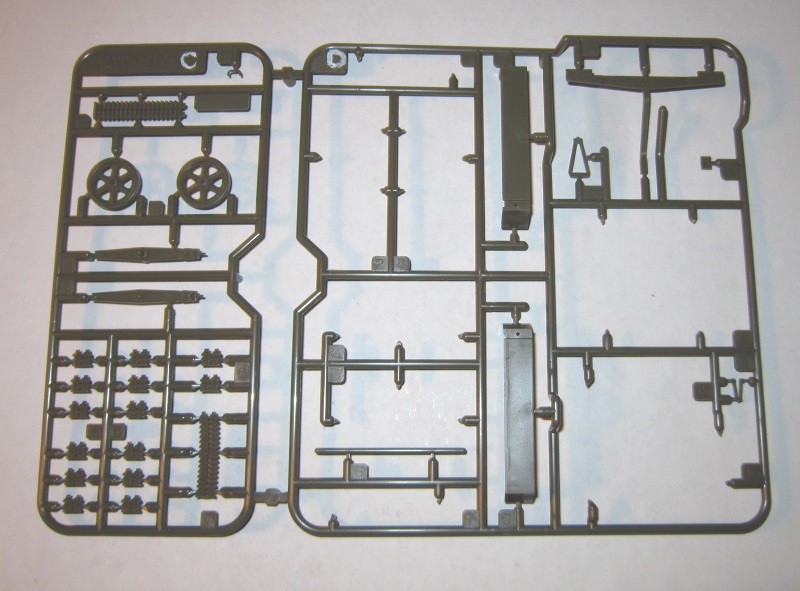 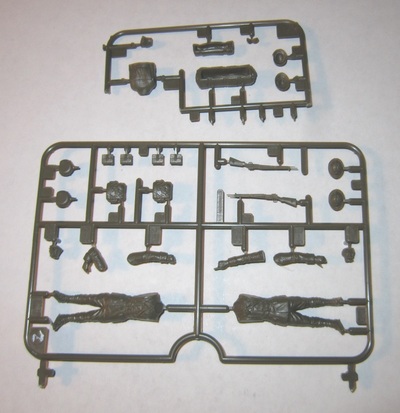 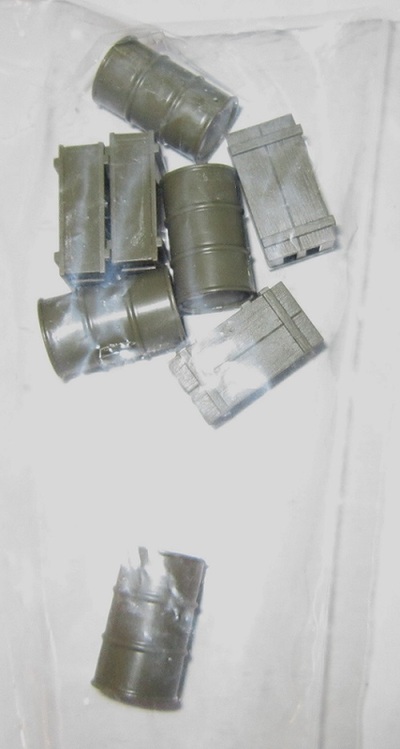 I have started assembly on both the UE and the tracked trailer. 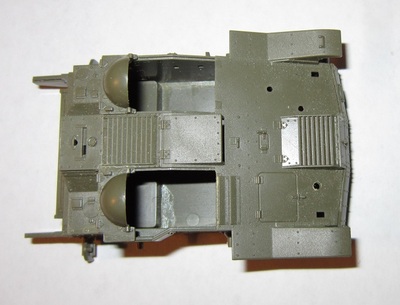 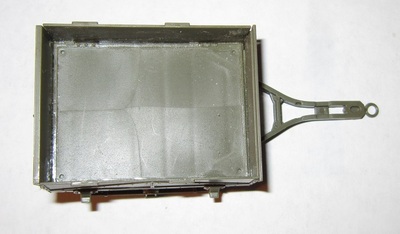 This kit will make up nicely into an instant diorama scene. Highly recommended.