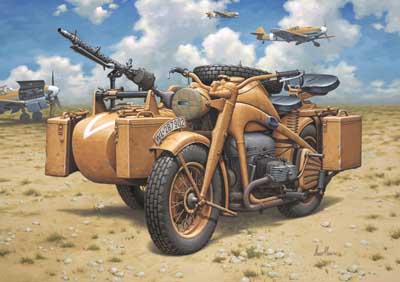 The Zundapp KS-750 was mass produced in more than 18,000 vehicles, from 1941 to 1944. It can doubtlessly be considered as one of the most up to date and modern creations of this period in the field of motorcycles. Thanks to it's essential lines and structure and the rationality of it's technical concepts. It's exceptional specifications and performance made it possible to use it widely on all fronts during WWII.

“Blueprinters” was a newsletter that Ertl published. It was sent to subscribers that predominantly built car and truck models. As part of the subscription to it, every so often, Ertl offered limited re-issues of older car and truck model kits that were ONLY available to subscribers. Ertl dug the molds of these older kits out of their mold archives and ran small quantities of them, which they thought would all sell.

They went wrong with offering the ex-Esci 1/9th scale Zundapp KS 750 with side car as one of these exclusive Blueprinter specials. Ertl had all the Esci molds at one time. Esci was based in Italy at then. The car and truck buffs did not snatch them up and mail orders were very poor. Ertl, thus, was left with a lot of the run of the kit left at the factory. They hauled skid loads of this kit to their factory discount store, near their plant in Dyresville IA and sold them to the general public. They still moved very slowly and Ertl reduced their price at least twice. In the end, they were going for 4 bucks apiece. Quite a bargain! I bought a large number of them, back in the early 90’s, when this happened and re-sold them on the internet (pre-eBay) for a tidy profit each time.

These blueprinters came in a very sturdy, end opening generic all white box – with just black text on them. This box has 3 end flaps and a locking tab. 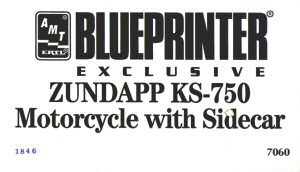 Some of the kits were even sold with the generic brown shipping box, that they were further put into to mail them to subscribers that purchased them. Strangely, the return address on the brown box is not Ertl’s address in Dyresville, but another firms address in Cedar Rapids IA. Maybe Ertl farmed the job of mailing out the kits to this outfit? I have never figured that one out. The copyright date of 1996 appears above this address.

I recently looked on the internet  to see if the kit is still around. I found a color box art for the kit that it once had at some time, but mostly the generic white box is shown at various places….mostly on eBay.

Ertl at one time owned all of ESCI’s 1/9th scale line of military motorcycles, a Kubelwagen Type -82, a Kettenkraftrad Sd.Kfz-2, A BMW R-75 in both solo and side car versions. One side car version as a civilian one, a military HARLEY WLA-45 and a British Triumph 3-HW. I have all of these now.. These molds later went to DML Dragon and Revell of Germany. For a while, they were re-released by both of them. DML even included vinyl figures in some of them, of their own molding.

One of the trees and the second decal sheet were only ever offered, previously, in ESCI’s kit of the solo version of the KS 750 (without the sidecar). Ertl grabbed this tree from their mold archives by mistake or as a BONUS. It is mostly weapons and personal gear used by fallschirmjager troops, The problem is that Ertl did not also include the black vinyl straps and buckles for this stuff too. You will have to make those out of lead foil or paper.

The instructions consist of 2 large sheets, that are folded in the center into 4 pages each. A smaller sheet, printed on one side, gives assembly drawings for the BONUS parts.

Page 1, of the first instruction sheet, begins with a very inky and dark photo of the model made up with Grossdeutschland Division markings. This is followed by telling you about the optional winter version you can build, with heating on the sidecar and the bike steering handles. This is in 5 languages, including English.

Page 2 is the parts tree drawings.

Page 3 gives the first 4 assembly steps and a list of the lengths you have to cut the vinyl tubing to for plumbing and wiring the bike. Assembly steps also include written instructions, on how to do that particular step, in multiple languages – including English.

Page 4 has the decal markings identities and a 4-view drawing that shows the general placement of what markings you may choose for the very large decal sheet.

Page 5 through 8, of the second instruction sheet, gives us a total of 27 assembly steps.

Parts trees are not alphabetized or have part numbers molded on them. This means that constant referral to the parts tree drawings will have to be done. However, parts are chronologically numbered on the drawings and it looks like you go through one tree at a time to build stuff. It will make for some extra tedious work and care will have to be taken to not grab the wrong parts.

The first tree holds: the sidecar halves and its fender. Its tail light, its tie down rings and three storage boxes that mount on the sidecar and bike. (32 parts). 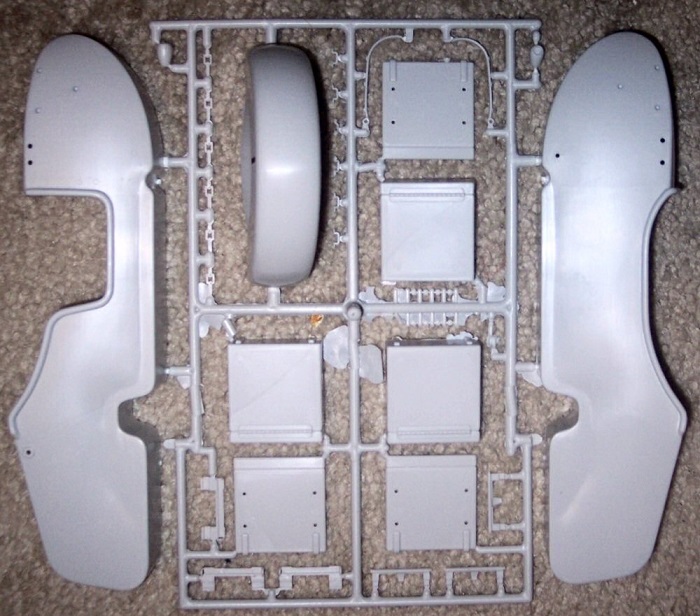 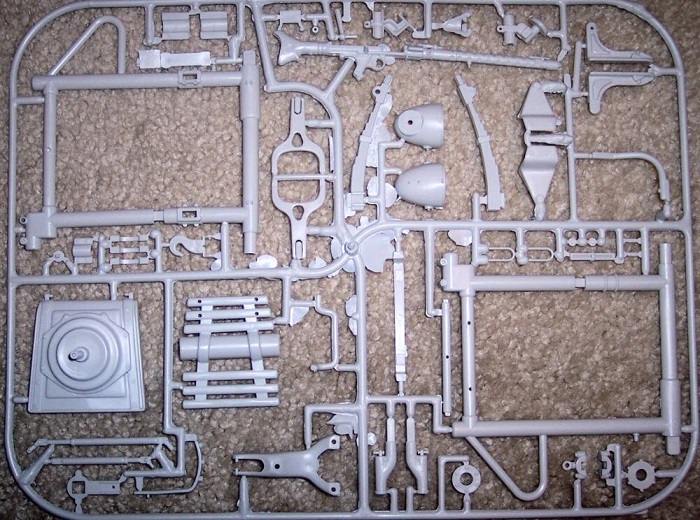 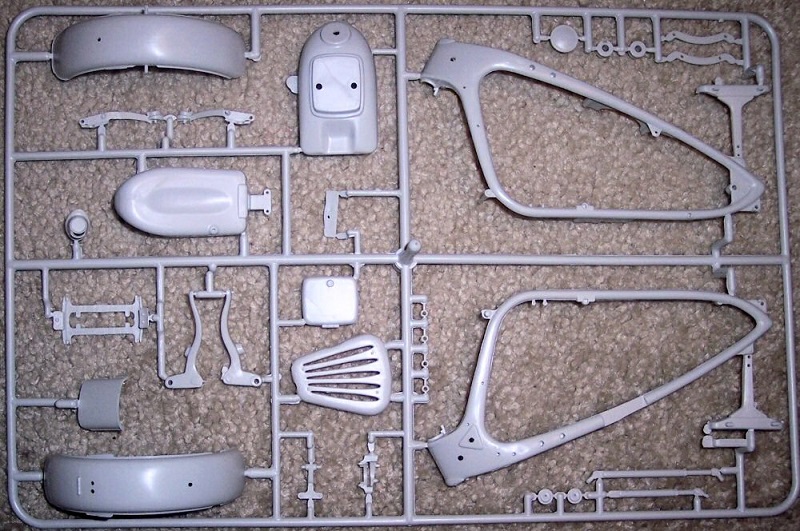 The fourth tree holds: the bike’s front fork (which you put the 2 metal springs into, to make it compress), fender braces, a Jerry can, the bike’s handle-bars, control linkages, engine dome etc. (78 parts). 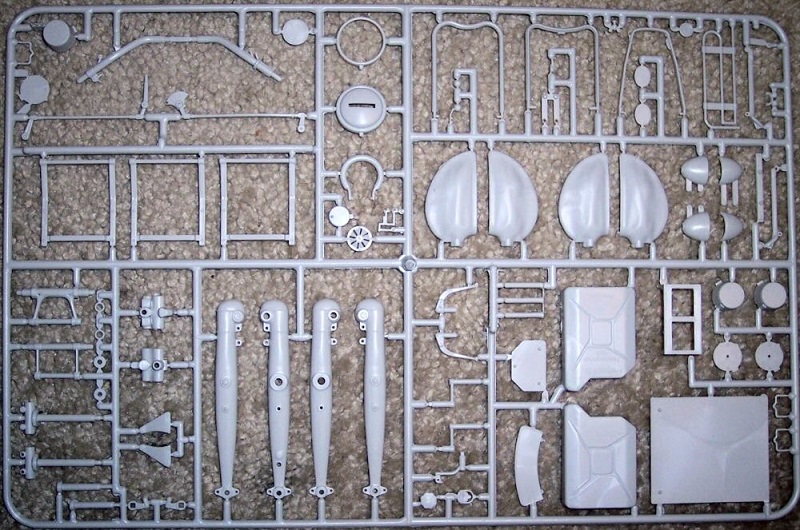 The fifth tree holds: engine parts and fittings and some tools etc. (77 parts). 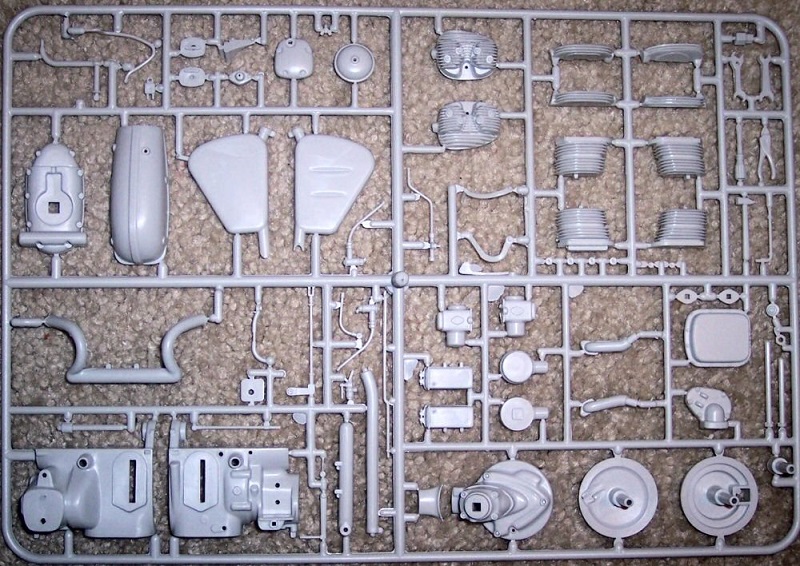 The sixth tree holds the spoke wheel rims for the bike, sidecar and spare tire (8 parts). 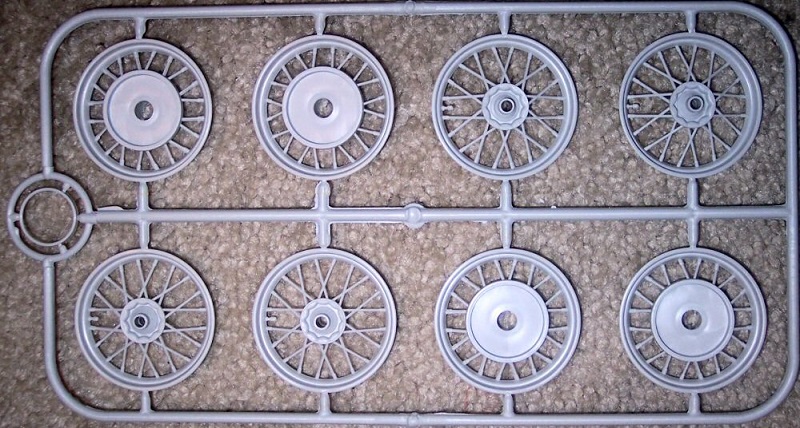 The next tree holds black vinyl seat cushions for the bike and sidecar, a tool box etc. (17 parts). 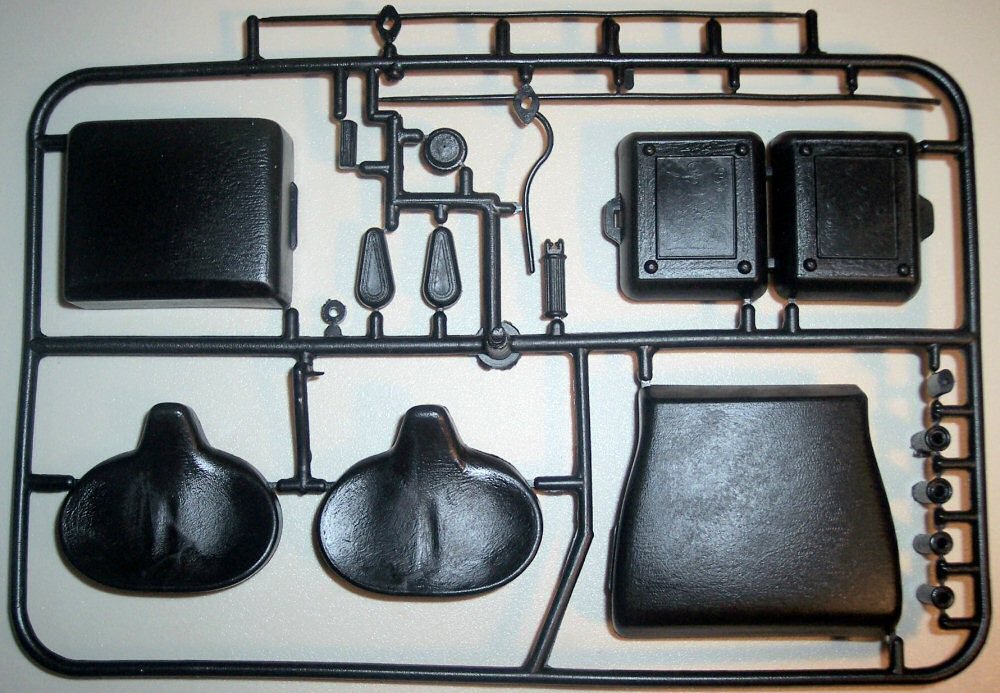 Additional parts included in the kit are the tires, wiring for the engine made of vinyl, fork springs and clear head lamp. 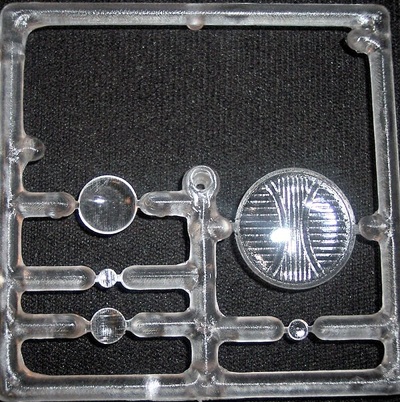 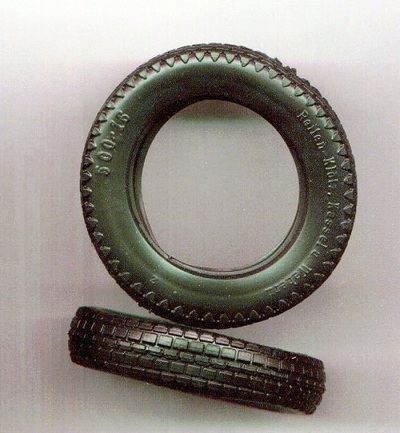 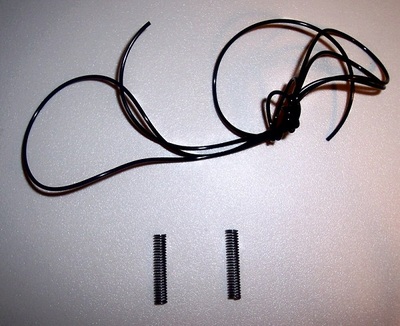 The seventh (very light gray) tree holds the BONUS parts (as already mentioned, only previously offered in the solo version of the Zundapp kit by ESCI). You get: a canvas saddle bag to go on the bike, a canteen, mess kit, gas mask canister, fallschimjager helmet with liner, a folded tarp, a shovel, a bayonet, a panzerfaust, a potato masher type grenade and a MP 43 assault rifle with it’s ground bipod and bayonet. Sadly, Ertl did not include the vinyl straps and buckles for this equipment, that was always in the solo version kit. 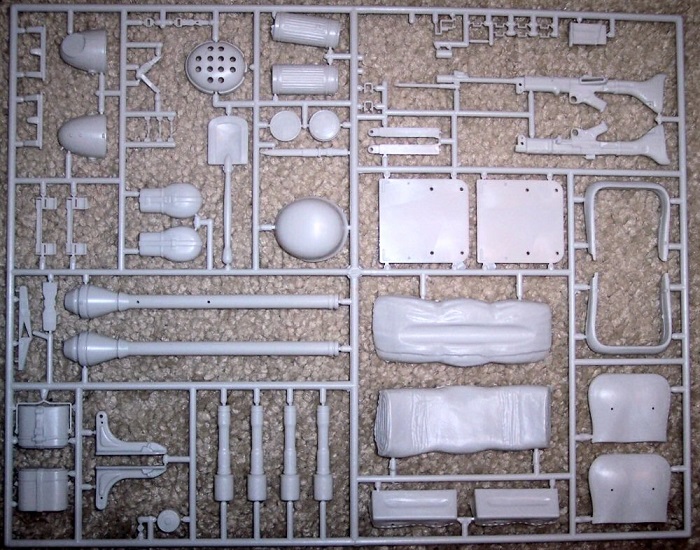 41 markings are given on the large decal sheet:

I highly recommend this kit to those modelers, like me, that wear tri-focals. Big parts, easy to see. I is, however, only for advanced modelers – due to the large amount of parts and assembly complexity. Although currently out of production, this kit…and others in the ESCI 1/9th scale line…may still be found on eBay or we can hope for a re-issue of them by DML or Revell of Germany again

I have built much of the kit so here are the photos of what I have completed so far. 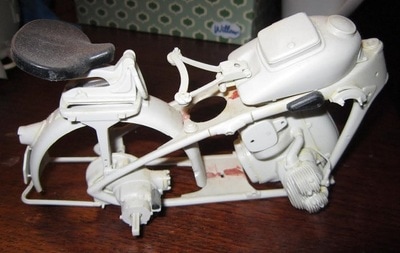 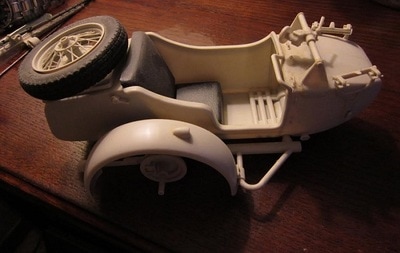