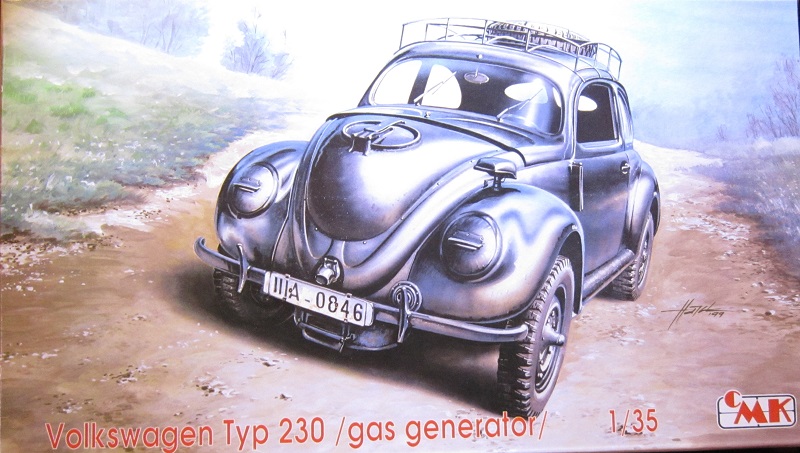 At the beginning of WWII, though the production of the civilian car KdF-Wagen was reduced, it was not quite stopped in the years 1938-40, Fifty four vehicles of the sedan version were produced. From 1942 to 1944, 630 cars were manufactured. All these cars were fitted with shadings of the front headlights. Some of them were equipped with the Notek light.

The first “Beetle” destined for the German army was produced in 1941. It was a sedan that was modified for off-the-road drive, and designated as Typ 92. After May 1943 it was re-designated as the Typ 82E (subject of another CMK kit of the VW). This had the chassis of the Kubelwagen and a two-door KdF body. The layout of this car was spartan, with only the bare essentials needed. The floor was like the Kubelwagen, made of wood.

The chronic shortage of fuel in Germany during WWII led to tests of alternate domestic fuels, like wood gas. For this, the car was adapted to use these fuels. The VW cars that were driven by wood gas generators were designated Type 230. In contrast to other VW cars, the wood generator in Volkswagen and Kubelwagen cars was installed in the front of the vehicle. The car also had a roof luggage carrier specially developed for it too. The maintenance of these cars was very demanding.

Like other three kits of variants of the VW Beetle that CMK markets, this kit comes in a shrink-wrapped end-opening type box. All the boxes in this series of 4 Beetles are too long, with about a 5” void down one end. The boxes could have been much shorter. I am no fan of end opening type boxes, because invariably parts will find their way past the end flaps to become lost…..especially the decals. Give me a tray and lid type box any day!

The box art on this one shows a VW Typ 230 parked on a country road. It is overall gloss black and has the license number IIIA-0046. Side panels of the box have 3 single paragraph histories of the car in Czech, English and German. These paragraphs are marked with images of the flags of the countries that the languages are spoken in. Features listed that are in the kit are PE and resin parts, decals, instructions in the 3 languages, glue and paint not included, small parts with sharp edges are in the kit so it is recommended only to modelers 15 years old and older.

Inside the box is a large sealed cello bag that holds one large medium gray tree of parts, the single body shell part, a tree of clear parts, the decal sheet, tan resin parts and a fret of PE parts. The decal and PE fret are in a smaller cello together, resin parts are in their own small cello and so are the clear parts

The instructions consist of a sheet folded in the center into 4 pages of 8 ¼” x 11 ¾” format. A second folded sheet is inserted into the center creates a unstapled booklet of 8 pages in 8 ¼” x 11 ¾” page format.

Page 1 begins with a side-profile line drawing of the VW Typ 230 Gas Generator. This is followed by the history of the car in Czech, English, German and French.

Page 2 begins with the parts trees illustrations. Like the other 3 kits instructions sheets, these drawings have no part numbers on them and neither do the parts trees. Only the resin parts pictured are numbered. Bad move CMK! This makes for tedious work to identify the parts needed as you build the kit. The part trees illustrations are followed by some international assembly symbol explanations, a listing of Humbrol and Tamiya paint colors (suggested to complete the kit) and the first 2 assembly steps.

Page 3 through 7 gives a total of 10 assembly steps.

Page 8 has a 3-view illustration for the paint scheme shown on the box art (already described above. Below this are side views of 2 other versions of the VW beetle that CMK markets and their kit numbers.

The largest medium gray parts tree is common to all the other 3 variants of the VW Beetle that CMK markets. It holds: the floor with fenders attached, wheel discs, steering wheel, dashboard, shift levers, seats and their legs, axles, front and rear bumpers, inner door panels, door handles, hood handle, notek lamp, windshield wipers, trunk handle, transmission hump and 2 styles of wheels and tires (one style has baby-moon hubcaps, the other does not) etc. (50 parts) 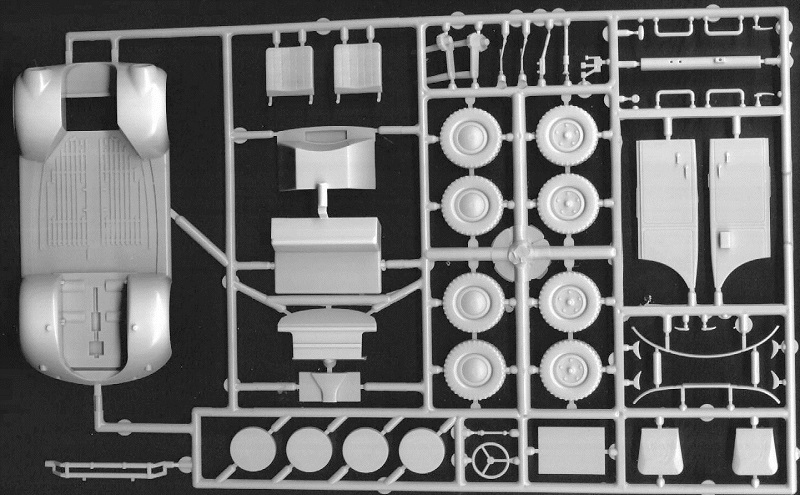 The medium gray body shell part is common to this kit and CMK’s kit of the Typ 82E. 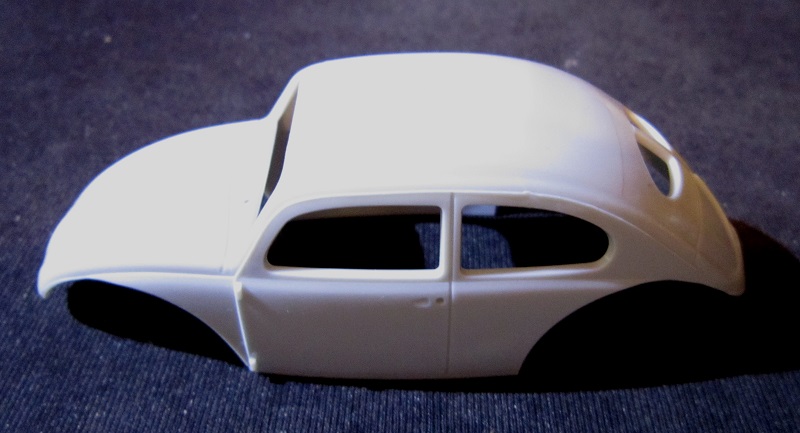 The clear parts are common to all the other 3 VW Beetle variants that CMK markets. It holds the windows and headlight and taillight lenses. The headlights are both the slitted covered ones or uncovered type. (13 parts) 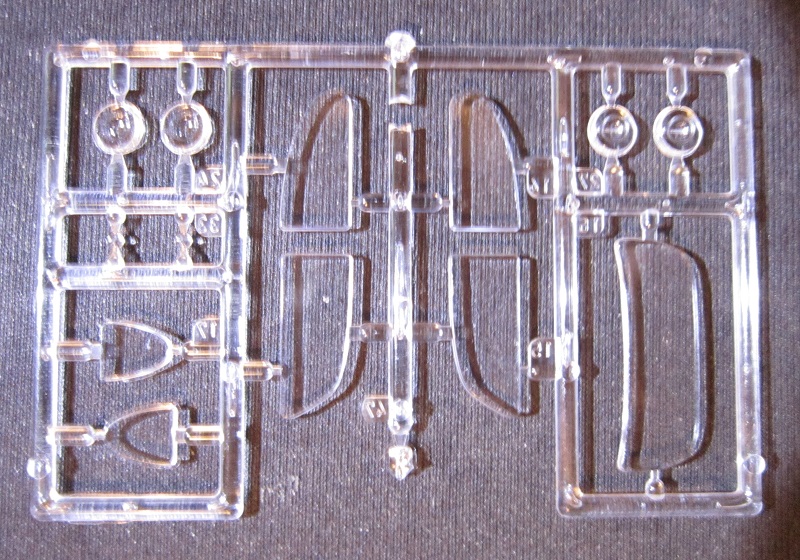 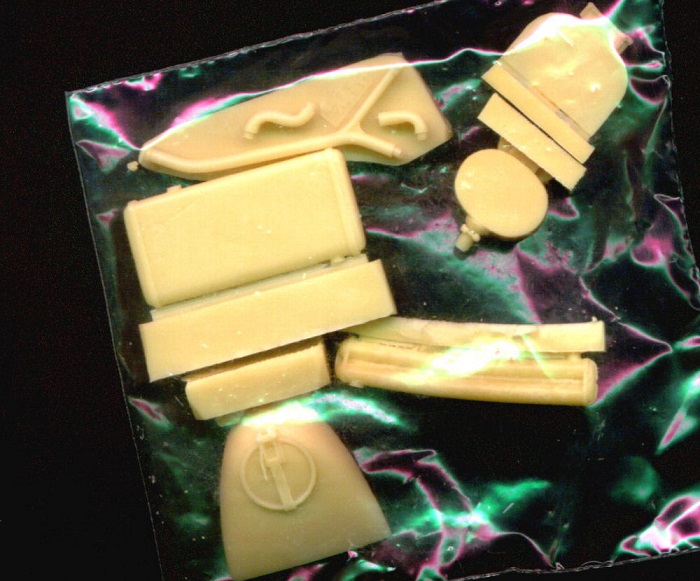 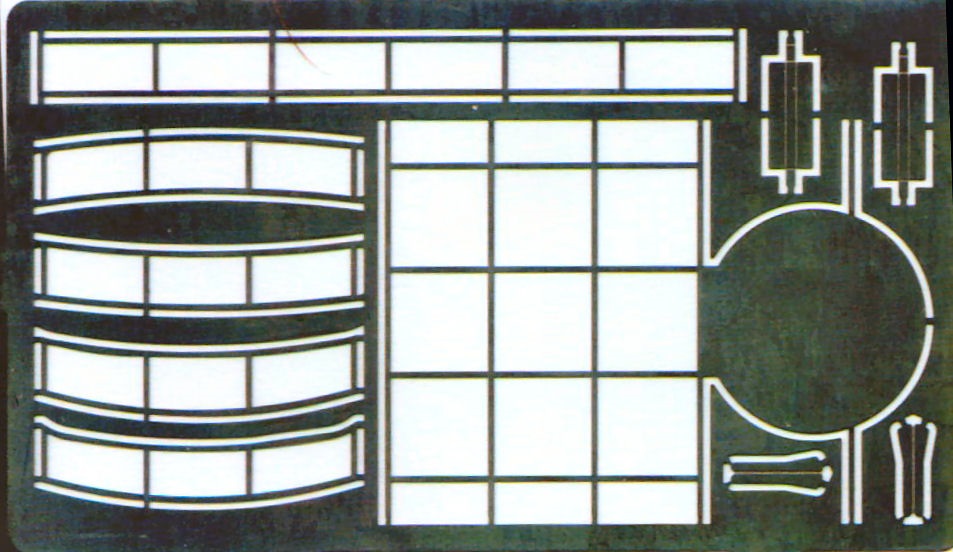 Also included in the kit are the wheels and accessories for the desert version of this kit. 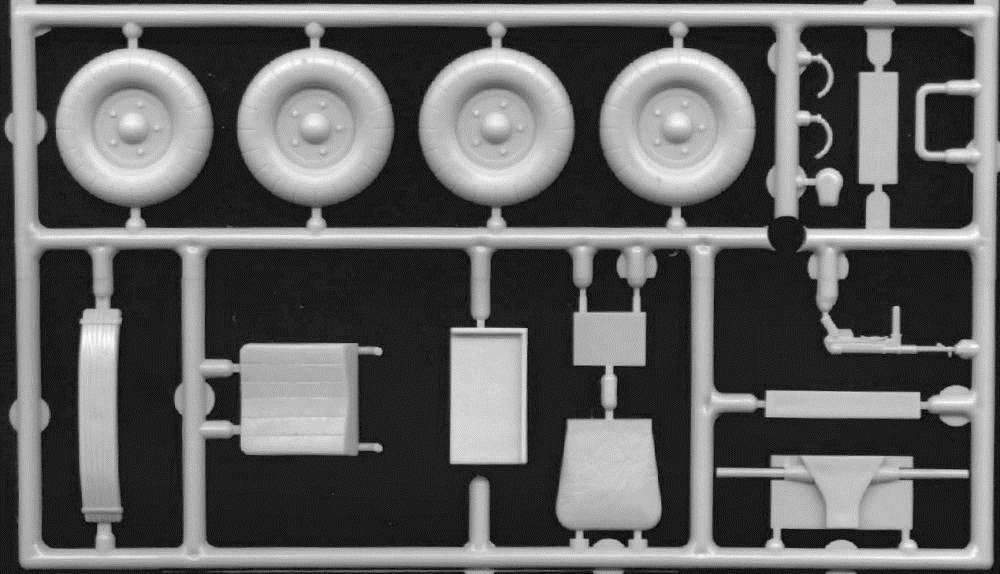 The decal sheet holds just license plate numbers: IIIA-9846 (shown on the box art painting), IIIA-43065 and some blank white license plates and black letters IIIA and numerals zero to 9 to create your own number. 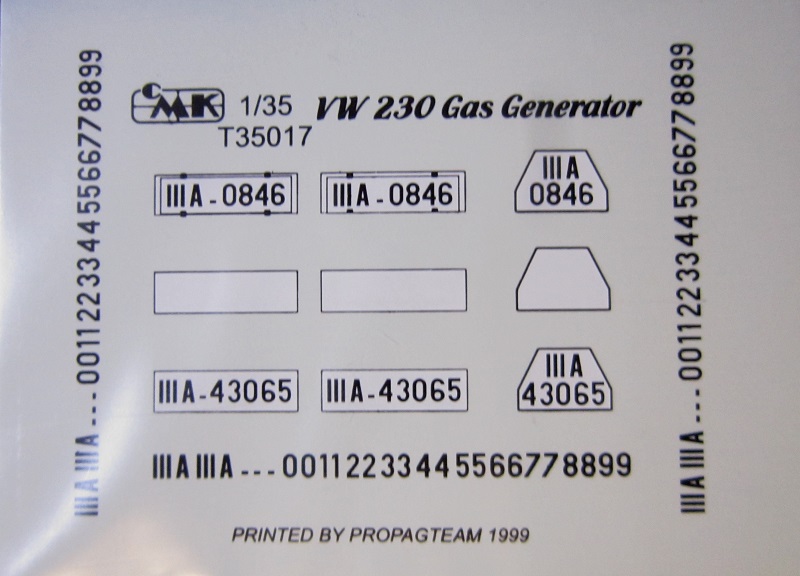 There is no engine or figures in the kit and the doors and trunk lid are molded solid.

This is one neat version of the VW Beetle. I wish I had more info about how that gas generator worked. With the bulged hood and the roof rack this is one salty looking vehicle. Highly recommended to both novices and advanced modelers.

Kit is courtesy of my wallet years ago.