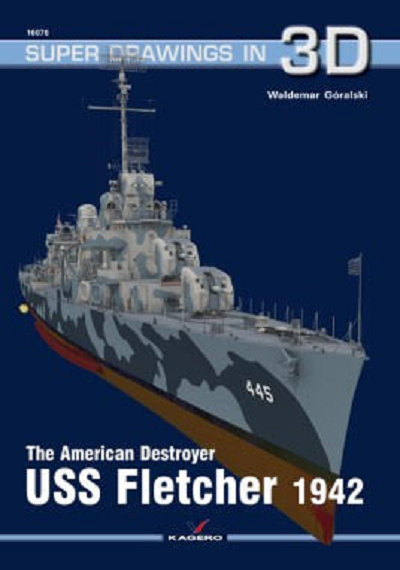 The Fletcher class was a class of destroyers built by the United States during World War II. The class was designed in 1939, as a result of dissatisfaction with the earlier destroyer leader types of the Porter and Somers classes.

Some went on to serve during the Korean War and into the Vietnam War.The United States Navy commissioned 175 Fletcher-class destroyers between 1942 and 1944, more than any other destroyer class, and the design was generally regarded as highly successful.

Fletchers had a design speed of 38 knots and a principal armament of five 5" guns in single mounts with ten 21" torpedoes in two quintuple centerline mounts. The Allen M. Sumner and Gearing classes were Fletcher derivatives.

The long-range Fletcher-class ships performed every task asked of a destroyer, from anti-submarine warfare and anti-aircraft warfare to surface action. They could cover the vast distances required by fleet actions in the Pacific and served almost exclusively in the Pacific Theater of Operations during World War II, during which they accounted for 29 Imperial Japanese Navy submarines sunk.

In a massive effort, the Fletchers were built by shipyards across the United States and, after World War II ended, 11 were sold to countries that they had been built to fight against: Italy, Germany, and Japan, as well as other countries, where they had even longer, distinguished careers. Three have been preserved as museum ships in the U.S. and one in Greece.

It comes in a self-sealing clear cello bag.

I found out the hard way that books in these cello bags can be removed easily, but the cello rips to pieces trying to put the book back in…sigh.

The cover art shows a color illustration of the USS Fletcher as a head on view, posed against a black background. It is overall grey with a black wave pattern on it and a white no. 445 on the sides of it’s bow.

The back cover has a color view of it from the stern.

Page 3 has a color repeat of the cover art.

Pages 4 to 6 gives the history of the USS Fletcher and its specifications.

Across the top of pages 4 & 5 is a color side view of one side of the USS Fletcher.

Again across the top of pages 6 & 7 is a color side view of the other side of the USS Fletcher.

Page 8 has a color stern and bow view.

There is a total of 138 color 3D walk-around type illustrations,, showing every inch of the USS Fletcher’s anatomy.
​The last page of the book shows 9 other Kagero book covers in black and white from their Naval Archives Series, over Kagero’s address in Lublin, Poland and their phone number.

There is a large single-sheet that is 40” x 17”, folded 4 times to fit the book that is inserted into the book. The face side has a w line drawings of the port and starboard sides, the top and bow and stern of the USS Fletcher in 1/200th scale.

The reverse side has line-drawings in 1/350th scale. Again views of the port and starboard sides and the top and 8 illustrations of sections of its body.

This book will be of great interest to ship modelers and naval historians alike.

I wish to sincerely thank Casemate Publishers, the North American distributor for Kagero books for this review sample. All Kagero book titles can be seen on Casemate’s website at:
www.casematepublishers.com
​Highly recommended.