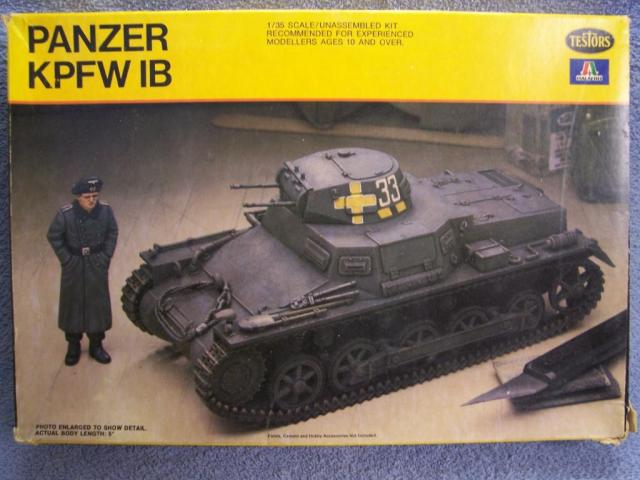 When the German Army began to rearm in earnest in 1933, the High Command asked Germany’s heavy armament industry to submit designs for a light tank that would be cheap and easy to produce in large numbers. From the designs submitted, that from the firm of Friedrich Krupp AG was selected as the Panzerkampfwagen I, or, as it was usually called Panzer I.

Production began in 1933. About 1,800 were built before production was discontinued in 1941, by which time the design was totally obsolete. The Panzer I was used in action in the Spanish Civil War by the German “Condor Legion” and Franco’s Nationalists. It saw combat in WWII with the German Army in the campaigns against Poland, Norway, the Low Countries, and France. However, by the time of the later actions, it was rapidly being replaced by the larger and more powerful Panzer II. Small numbers of the Panzer I’s remained in service as reconnaissance vehicles and saw some action in North Africa and on the Eastern Front.

However, the main contribution made by the Panzer I to Germany’s war effort was as a training vehicle. Before the first shots of WWII were fired, German tank troops had trained for years with the Panzer I, creating and perfecting the “Blitzkrieg” tactics with which they were able to over-run most of Europe in the early years of the war.

As more advanced tanks replaced the Panzer I, many of the Panzer Is were rebuilt for use as command vehicles and as self-propelled artillery. The later was armed with either the Czech 47mm anti-tank gun or the German 150mm infantry howitzer. These versions were used in action up to about the end of 1942.

While the Panzer I cannot be said to have been an outstanding combat tank, nor a particularly original design, it still must be given an important place in the history of armored warfare because of it’s contribution to the formation of the German Panzer Korps and the tactics that very nearly won for Germany in WWII.

Italeri is an Italian model company. For a time, some of their kits were imported and sold under the Testor label, Testor being located in Rockford, Illinois USA. This kit has the copyright date of 1979.

The kit comes in a shrink-wrapped end-opening box that has an inner tray that slides out. At the time of this kit’s release, along with other AFV model kits by Testor/Italeri, Testor packed the kits in bright orange boxes with photos for box arts, usually showing the kit made up.

The box art on this kit is a photo of the Pz.Kpfw.IB made up and sitting on a modeling table, surrounded by a hobby knife, paint bottles some sandpaper and the standing figure (included in the kit) also made up and next to the tank. It is in overall panzer gray and has the very early all yellow German cross thinly outlined in white on the turret, with a white number 33 behind the cross. Under the 33 is two yellow lozenge marks. This scheme is for a vehicle with the 5th Panzer Division, Poland, 1939. These marks are on the kit’s decal sheet.

The yellow cross was soon dropped after the Polish invasion. At the time it was going through several transitions.

The made up model shown on the box is credited to the Mike Good as the builder. Eight more photos of this model adorn the back of the box as walk-around  type color photos.

There is a pipe, included in the kit, to have the figure smoking. However, Mike Good did not choose to use it for the box art photos.

On one side panel there is a color profile of a Pz.Kpfw.IB in earth yellow, with a black German cross outlined in white on sides of the hull. Next to this profile is a short history of the vehicle in English.

A second side panel has a listing of Testor brand glue, paints, hobby tools, brushes and “Magic tape”. The kit is said to be for modelers 10 and older.

Inside the box is a single large sealed cello bag that holds 2 large panzer gray colored parts trees and the steel colored vinyl rubber-band type treads. These treads are of the non-glueable type and have to heat riveted or superglued into a continuous loop.

The instructions consist of a unbound booklet of 8 pages in 8 ½” x 11” format.

Page 1 of the instructions begins with a black and white photo of the model and standing figure made up. This is followed by the history of the Pz.Kpfw.IB in English. It is followed by “before starting”, “preparation of parts”, “spray painting” and “detail painting” instructions.

Pages 2 to 5 give a total of 8 assembly steps. Step 8 being just for assembly of the figure and painting it. Not much “assembly” is really needed for him. Just adding a pipe to his mouth and a holster to his belt. He is molded all in one piece with his hands in the pockets of his greatcoat. He is wearing the early Panzer crew beret.

Each step has very detailed written instructions next  to it. Good move Testor.

Although several hatches can be posed open if preferred, there is no interior detail. The suspension will move, the turret will rotate and the guns elevate however.

Page 6 shows 5 different painting and marking schemes. These are all as very tiny 4-view drawings. They are so small that you have to get them under a magnifying glass to see things good. Bad move Testor.

5.A Pz.Kpfw.IB of the Legion Condor (German “Volunteer” Forces), Spanish Civil War, Spain, 1937. The vehicle is in overall German panzer gray. It has a white rectangle with a black X spanning it, corner to corner, on the hull sides and the turret roof. There is horizontally striped flag, with red, yellow, red stripes on the front and back of the hull along with the white number 424 (on the decal sheet this number is 121) and a white insignia of a crossed sword, rifle and long handled axe

Page 7 of the instructions has figure painting and weathering hints in long descriptions on it.

Page 8 is the parts tree drawings. Parts are labeled with symbols, rather than the usual alphabet letters. There is a STAR tree, a SQUARE tree and a CIRCLE tree. 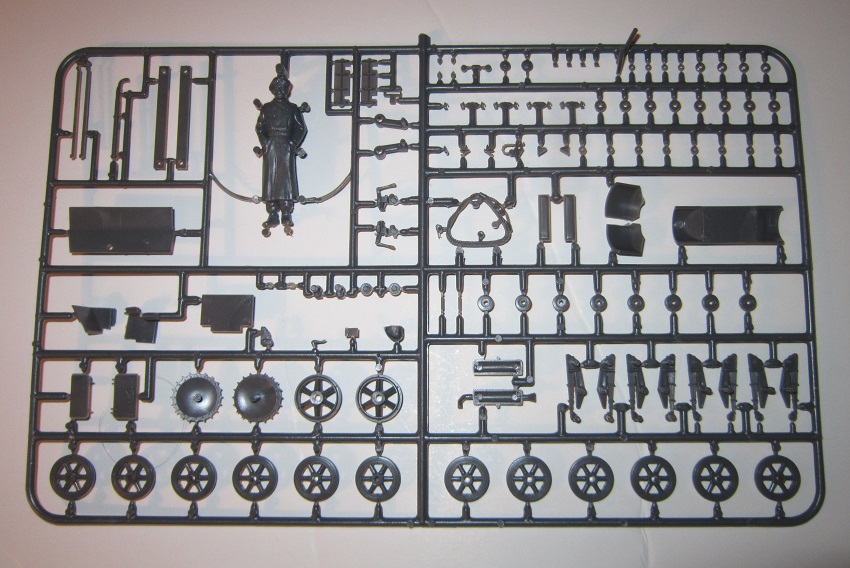 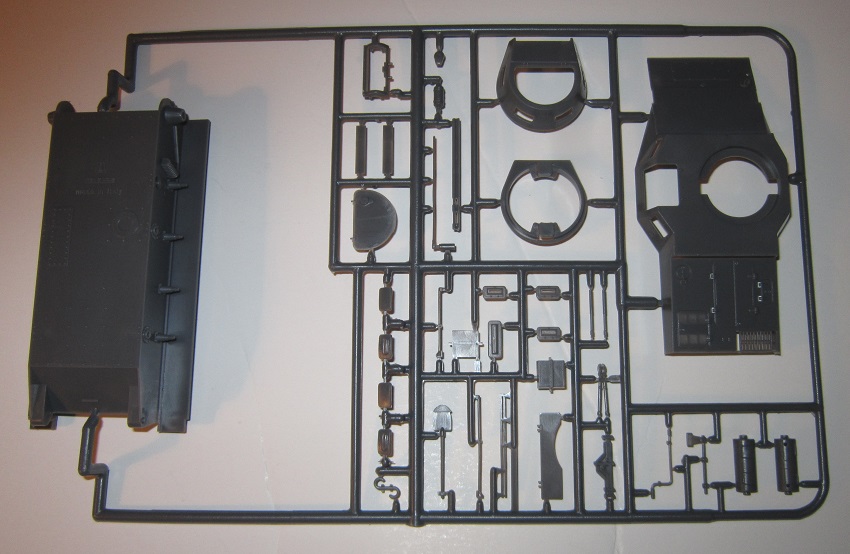 The Circle tree is the steel colored vinyl tracks. There are the two long runs on this tree and a couple of short runs to use as spares to hang on the front and rear of the tank. There is also a perforated piece that is supposed to be the muffler shield. 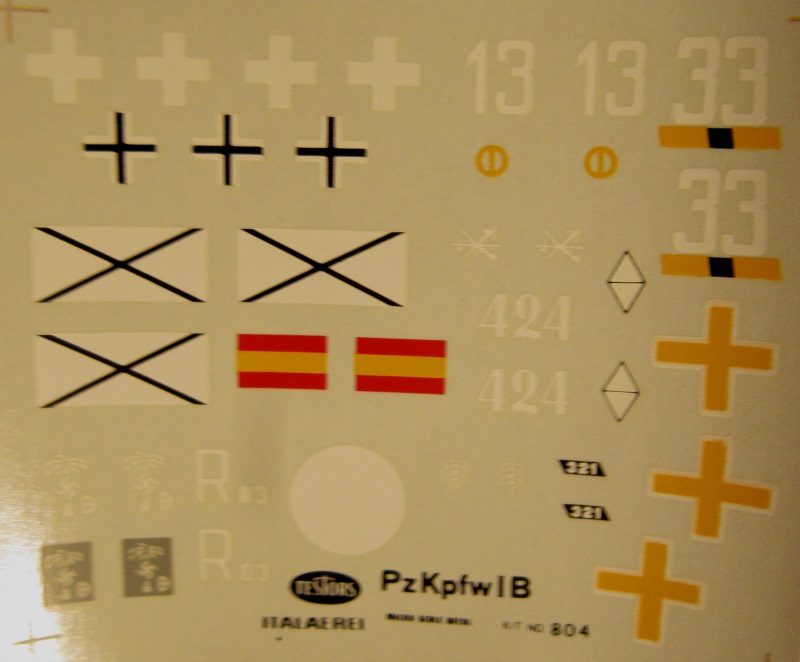 I highly recommend this kit to WWII German AFV modelers. It is a must have, if you want to have a collection of German tanks with the very first production one they had.

I picked up this kit at an IPMS contest from a vendor there for a song.