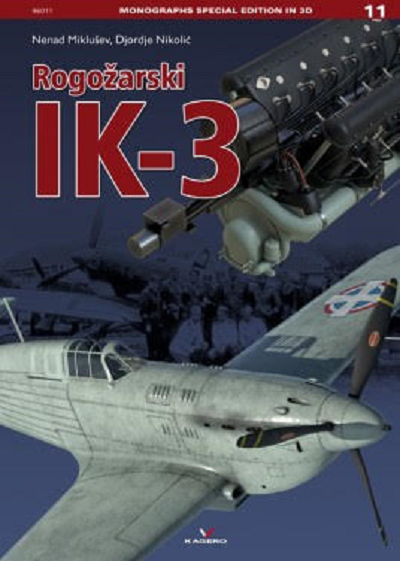 The Rogožarski IK-3 was a 1930's Yugoslav monoplane single-seat fighter, designed by Ljubomir Ilić, Kosta Sivčev and Slobodan Zrnić as a successor to the Ikarus IK-2 fighter.

Its armament consisted of a hub-firing 20 mm (0.79 in) auto cannon and two fuselage-mounted synchronized machine guns. It was considered comparable to foreign aircraft such as the Messerschmitt Bf 109E and came into service in 1940.

The prototype crashed during testing; a total of twelve production aircraft had been delivered by July 1940.

Six IK-3s were serviceable when the Axis invasion of Yugoslavia began on 6 April 1941. All six were in service with the 51st Independent Fighter Group at Zemun near Belgrade.

Pilots flying the IK-3 claimed 11 aircraft shot down during the 11-day conflict. According to one account, to prevent them from falling into German hands, the surviving aircraft and incomplete air frames were destroyed by their crews and factory staff.

Another account suggests that one aircraft survived the invasion and was later destroyed by sabotage. The IK-3 design was the basis for the post-war Yugoslav-built Ikarus S-49 fighter.

Kagero is a publishing company based in Lublin, Poland. This book is all in English.

One side has a top, bottom and side view of a DB-60 engine version, 3 side views of the engine, and a 3-view of the 2nd series version.

The reverse side of this sheet has a 4-view of the prototype, side views of the 2nd production model, a illustration of the instrument panel, bulkheads and wing fillets.

It also includes a pair of 3D glasses, that have one blue lens and one red one to view the 3D illustrations.

The cover art is a black and white wartime photo colored blue, showing air-crewmen around a IK-3 and a photo of it's engine, above a photo of what I believe is IK-3 model made up. It is overall light-grey.

Line drawings to 1/48th scale include:

There is a color 3D 5-view illustration of the IK-3.

There are 52 other 3D walk-around type color illustrations of the anatomy of the IK-3. it's engine, guns and dashboard.

10 3D photos of the IK-3 model made up in overall light-grey and with a wave pattern of green, tan and light-grey. Also one that is overall silver with blue and white circles with a red star in the center for the national marks.

There is a page that shows 78 black and white cover arts of other aircraft books Kagero manufactures.

This is a neat book about this obscure aircraft. To me it looks very similar to the British Hurricane

It will be of great interest to aircraft historians and modelers alike.