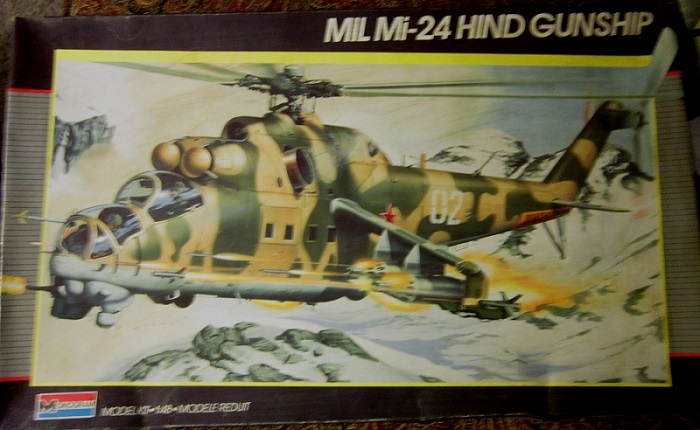 One of the deadliest weapons in the skies today is the attack helicopter, the most formidable of these being the Soviet Mil Mi-24 Hind. This weapon is seen in two major variations, the hind A, with a angular cockpit greenhouse, and the Hind D, with the unique double-bubble arrangement for the two pilots. Both versions are equipped to carry up to eight fully armed troops plus heavy loads of weapons and support equipment, a characteristic unique to the Hind.

The Hind-D version, depicted by this Monogram model, is specifically designed for the ground attack role, and carries a nose-mounted 12.7mm four barrel rotary cannon. Additional guns can be mounted on the stubby wings, along with a variety of the ground attack missiles and bombs. Two of these helicopters were delivered to the West by defectors in 1986.

Production of this deadly machine began over thirty years ago and several hundred have been exported to countries outside the Warsaw Pact. Most notable have been the Hinds used by the Soviet-backed government in Afghanistan and those with the Sandinistas in Nicaragua, about 300 miles south of Mexico.

This Monogram kit of the Hind-D comes with markings for these helicopters used in Afghanistan, Czechoslovakia, Nicaragua and by the Soviet Union.

This kit is by Monogram, who is now owned by Revell. Although this particular boxing is out of production, (it has a copyright date of 1986) a Hind has been released in this scale under the Revell banner as kit no. RMX5856. It may be a re-pop of this Monogram mould with new decals and boxart.

The kit comes in a shrink-wrapped tray and lid type box. The box art shows a Hind-D overflying snow covered mountains and firing it’s under-chin gun and rockets. It is in Soviet Air Force markings with a fuselage number of white 02. However, on the decal sheet this number is printed in yellow. It has a camouflage pattern of dark green over tan above and light blue below. Under the tail is a yellow banner with the Russian word for CAUTION on it.

One side panel has 5 color walk-around type photos of the model made up in the box art scheme. The other side panel has a color profile of another Soviet Air Force marked Hind, in the same camouflage scheme and bearing the fuselage number 36 in yellow. (this number is not on the decal sheet). Next to this is a sentence saying that the Hind can carry 8 fully equipped troops and a list of features of the Kit:

Inside the box are 3 light tan trees of parts, the two light tan fuselage halves, a tree of clear parts, the decal sheet and the instructions. Parts trees are all in one large sealed cello bag. The trees are numbered, next to each part, but they are not alphabetized. This means searching each tree for the part needed in each construction step. Bad move Monogram. 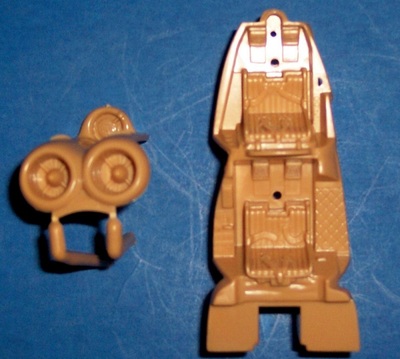 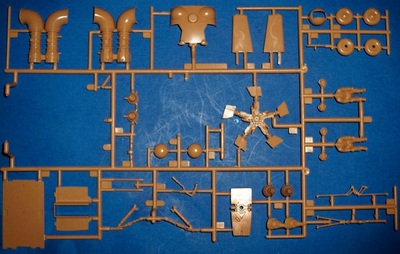 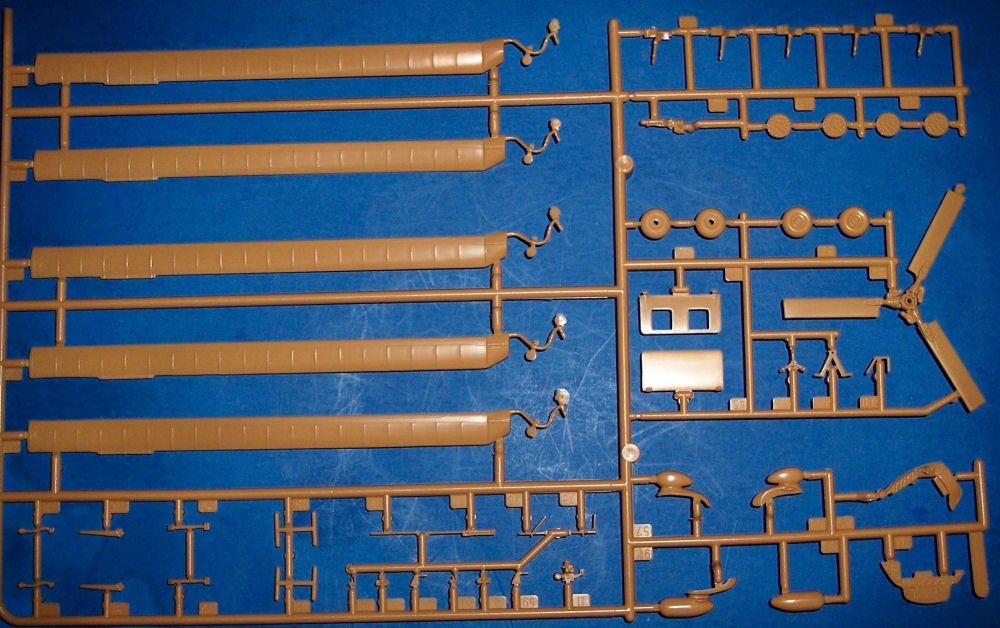 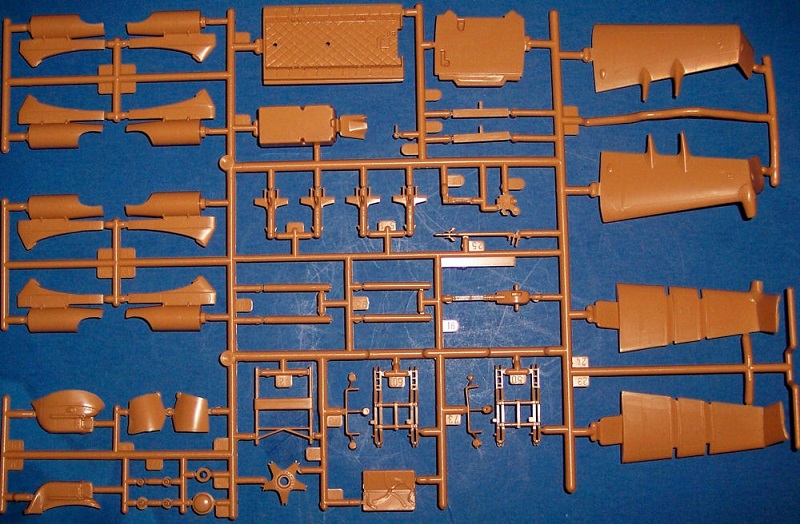 The last tan parts are the two fuselage halves. 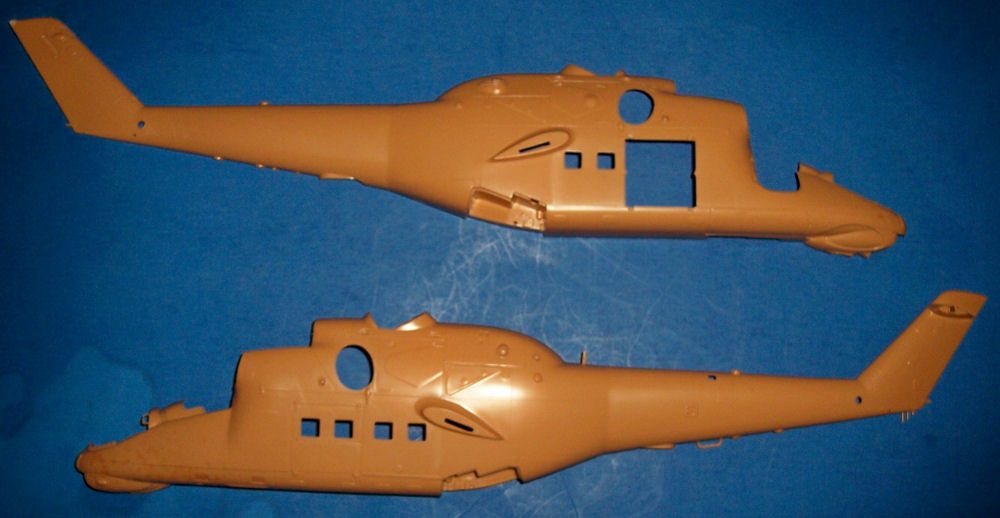 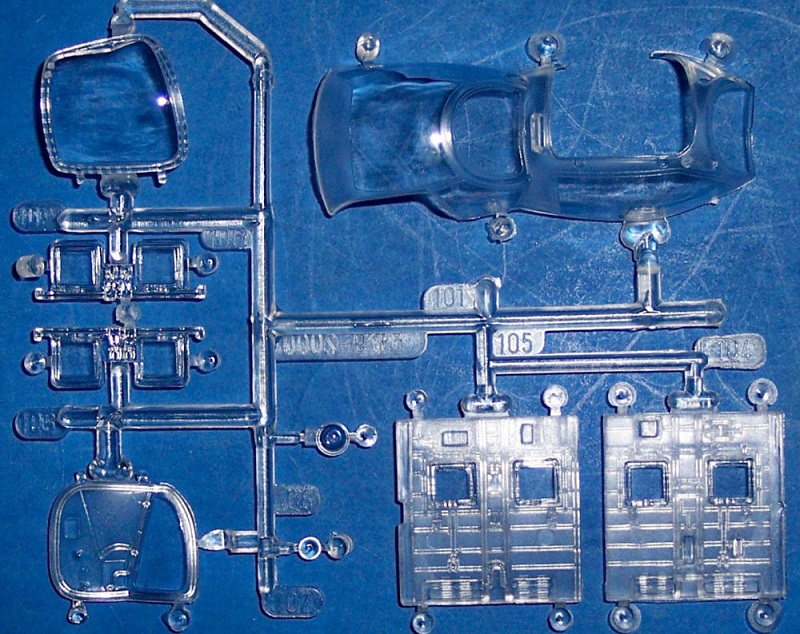 The instructions consist of a very large sheet (21 ½” x 16 ½”) that is folded in half horizontally and then folded vertically into 4 sections.

Page one has a line drawing of the Hind at the top, followed by the history of the helicopter next to international assembly symbol explanations.

Page two has READ BEFORE YOU BEGIN instructions in 7 languages (including English) followed by a paint color listing for Monogram-Humbrol brand paints. The rest of his multiple folded sheet has a total of no less than 47 assembly step illustrations. These are very detailed and include color mentions for any item needing painting in each step. Nice!

At the end of the assembly steps is a 3 view illustration of the Hind showing it’s segmented camouflage. Next to that is a listing of the colors that were used on each of the 4 schemes available on the decal sheet. This is followed by four 2-views of each of the 4 schemes provided in the kit, showing decal placement. The decal sheet could, perhaps, have included some stencil markings. 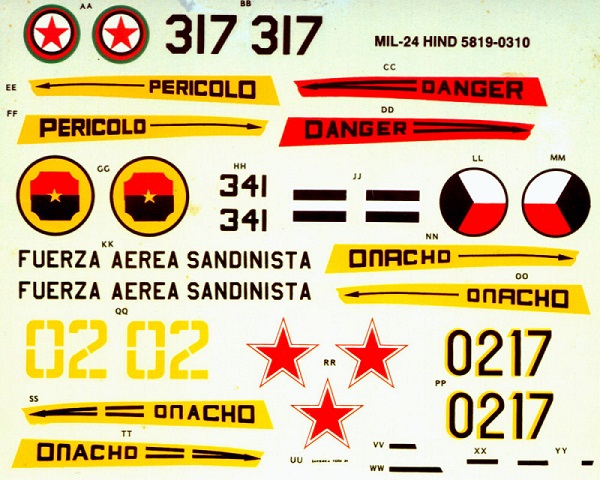 I bought this kit back in the 80’s at my local hobby shop. Previous to it there was only one lonely 1/72nd scale kit of the Hind available, I think by Airfix.