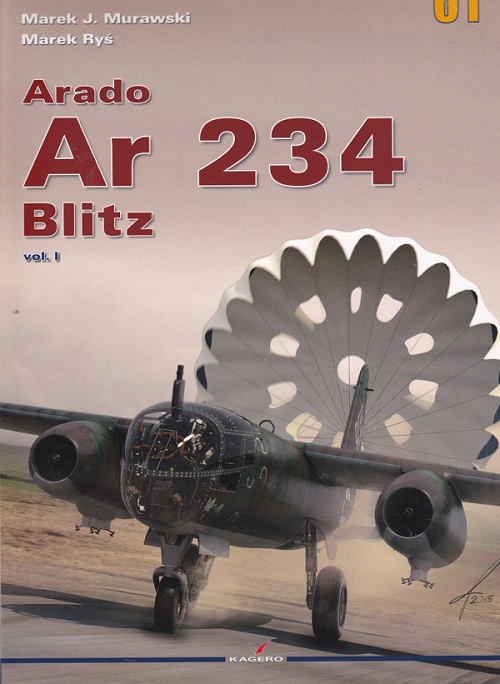 Produced in very limited numbers, it was used almost entirely in the reconnaissance role, but in its few uses as a bomber it proved to be nearly impossible to intercept. It was the last Luftwaffe aircraft to fly over Britain during the war, in April 1945.


Kagero is a book publisher based in Lublin, Poland.

It includes a cardboard pair of glasses with one blue lens and one red lens to wear to see the illustrations in 3D.

There are 84 black and white wartime photos, most of which are walk-around type showing various parts of the Ar 234’s structure inside and out.

There are 66 color 3D illustrations of every last inch of the aircraft’s interior and exterior.

16 color walk around photos of a restored Arado 234B-2 in the Smithsonian National Air & Space Museum.

8 color profiles in the back of the book and 2 more on the back cover.

The last 2 pages have numerous color cover arts for other books Kagero publishes.

A second sheet that is also tucked inside the book is 16” x 26 ¾” and has a 7-view line drawing in 1/48TH scale on one side. The backside being blank. It is folded several times also to fit the book.

I want to thank the folks at Kagero and at Casemate for this review sample.

The book came from Casemate in a heavily padded envelope.

Casemate is the North American distributor of Kagero books and the full listing of Kagero’s titles can be seen on Casemate’s web site.