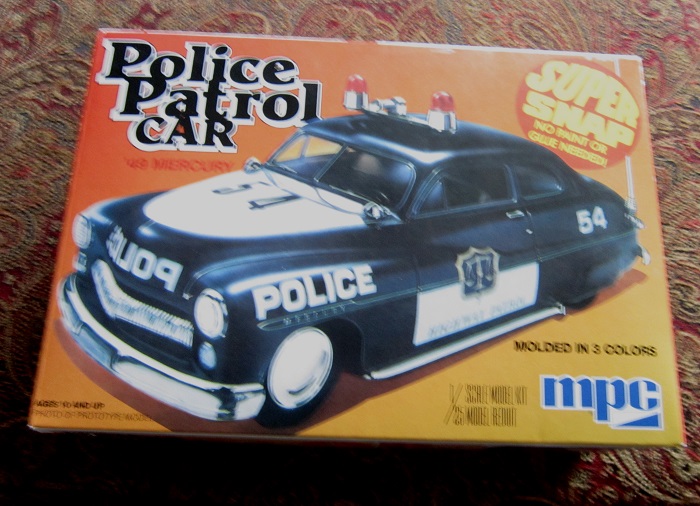 
MPC is a model company that is owned by Round 2 Models in South Bend, IN. They also own AMT and Polar Lights model companies.

The box art shows the model made up. It is, by the way, a 1950 Mercury 2-door coupe. It is black with a white hood top and a white bottom on the doors. A black number 54  is on the white hood top. The white bottom of the doors have HIGHWAY PATROL on them with a blue shield above that is outlined in gold and has a gold scales on it. It has a large white POLICE done in mirror image reverse on its nose. The white number 54 appears again on the sides of the rear fenders and the white POLICE is on the sides of the front fenders and on the trunk with the 54 above it.

The box art says the kit is for ages 10 and older modelers and is molded in 4 colors: Black, tan, transparent red and chrome plated. It is a SUPER SNAP-TOGETHER kit and no glue or paint is needed.

One side panel has a color photo of the model built up and shown from the rear. Four walk-around type color photos  show the emergency red roof flashers, the interior, custom wheels and other plated parts. Below these is a list of the kit’s features:

Easy assembly, suitable for the beginning modeler, skill level 2, for ages 10 and up, molded in 4 colors and colorful details included.

The other side panel has a color side profile photo of the model made up. It says that the photo is the actual size of the model. Features are again listed.

The bottom of the box says the skill level of 2 again and for modelers 10 and over. The 4 colors of plastic it is molded in are repeated and the decals are the water-slide type. This is all said in English, French and Spanish. Below this is the parts trees illustrations. It is stated that Goodyear and Ford have licensed the kit for using displays of their products. A choking hazard due to small parts in the kit is warned for kids under 3 in the 3 languages. Round 2’s street address in South Bend IN is given and the street address of their office in the U.K.

Inside the box is a one sealed cello with a black body shell in it (inside this part is MADE IN CHINA).

A second sealed cello holds a black parts tree that holds the bottom panel of the car and axle parts (6 parts). A second black tree holds the wheel halves (8 parts). 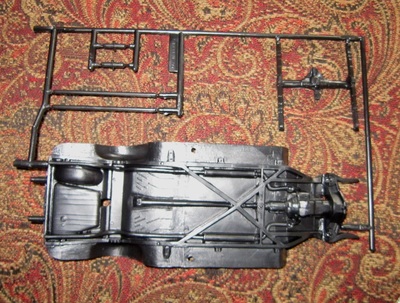 The third parts tree in this bag is light tan and it holds the interior, front seat, dashboard and steering wheel (4 parts) No shift levers are provided and the foot pedals are molded into the floor of the interior part. 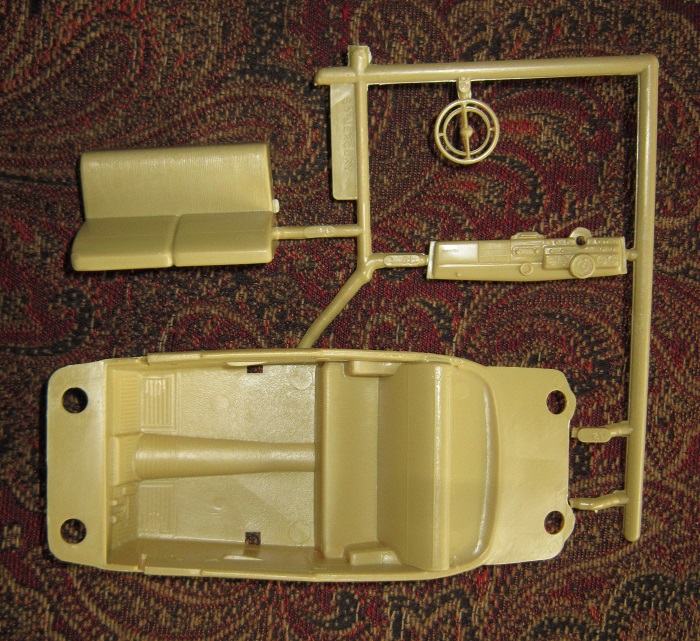 A clear part tree in in another cello that does all the windows in one piece. The 2 transparent red emergency roof flashers are wrapped in tissue and in this same cello bag. 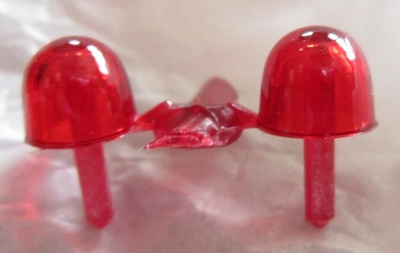 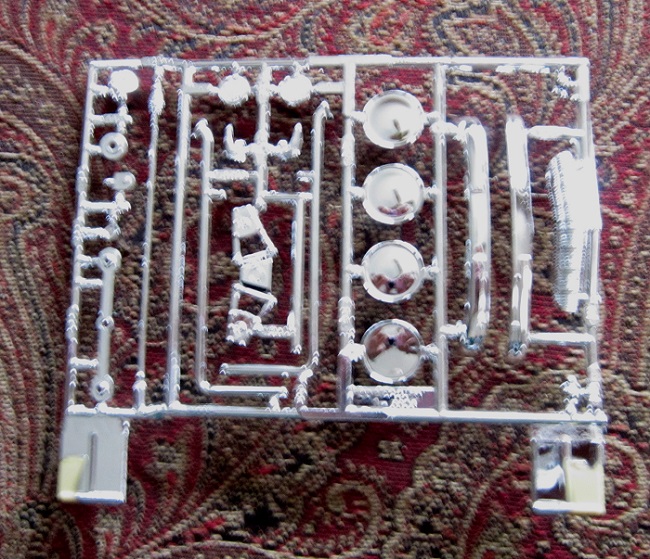 The decal sheet in a sealed cello is next (already described above). It has an instruction sheet with it and a yellow sheet on it’s face to protect it from scratches. 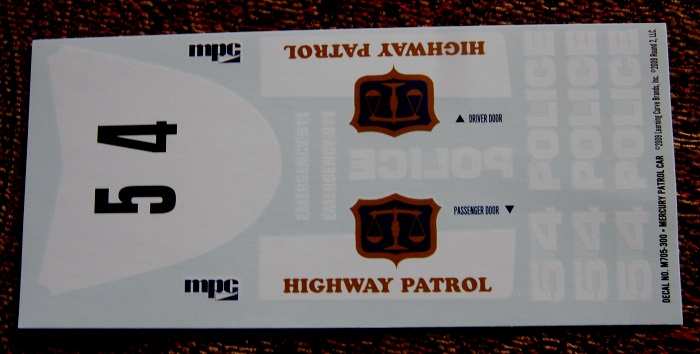 All the cellos in the kit have suffocation warnings on them as being a hazard to small children in multiple languages including English.

The instructions consist of a single sheet that is folded in the center to create 4 pages in 8 ½” x 10” format.

Page 1 begins with a black and white illustration of the 1950 Mercury police car and the mention that the kit is SNAP-TOGETHER and that no cement or paint is needed. You should follow the numbers and it is an easy assembly. Below this is the first 2 assembly steps.

Page 2 to 4 give a grand total of 8 assembly steps. The copyright of the kit is said to be 2009 and Ford and Goodyear’s licensing agreement with Round 2 is mentioned again.

There is a small accordion folded Round 2 kit catalog for 2011-2012 and a card to apply for Round 2’s e-mail newsletter that completes the kit’s contents.

I purchased this kit at my local hobby shop with the intended purpose of building it and entering a photo of it into the current contest being held on the Modeling Madness web site, which is for anything that is POLICE.  Normally, I don’t do car models, being more into AFV kits.