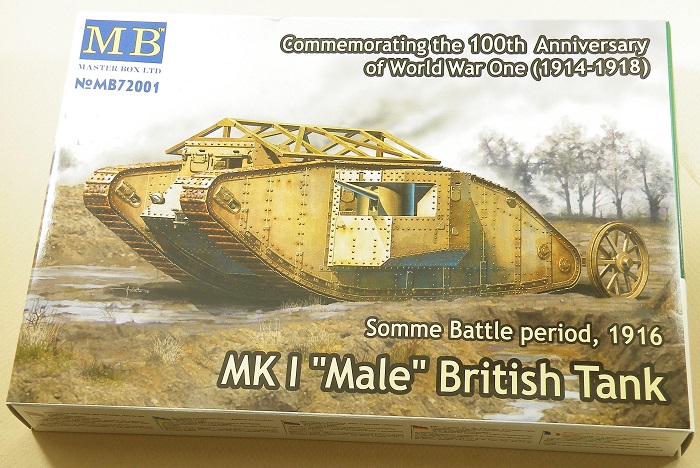 For decades the World War 1 small scale modeler had only one model of the Mk 1 Male tank to build, the Airfix 1/76 kit. The Airfix kit dates back to 1965 and, for its time it, was a very good kit. But while it is labeled a Mk.1 it is actually a mixture of the Mk. 1 and 2 tanks. While a decent Mk.2 can be built from the kit, a lot of work is required to do so. Now with the centennial of the First World War will start in July 2014, Master Box of the Ukraine has released  Mk.1 Male and Female tanks for the Somme Campaign of 1916. A Mk.2 Male and Female tank as well as Mk I Male and Female tanks for Gaza 1917 are also due to be released soon. Master Box is making a commitment to remember the "Great War" in plastic and 1/35 kits are also planned to be released, but at the time of this review what kind I am not sure. I recently purchased this model from my local hobby shop and I couldn't wait to get home to see what it looked like so let's take a look and see how Master Box did on making this Mk.1 Male tank.

The model comes in an end opening box with a color painting on the front and a painting guide on the back listing Vallejo and Lifecolor paints for the color scheme. The model represents the post Solomon camouflage scheme of a single overall color of Dark Khaki. From the research I have done I feel that Vallejo Flat Earth 983 may be a better option. When I built a supply tank model based on the Airfix kit I used Tamiya Flat Earth XF-52
as the base coat. On one side of the box are five CAD drawings of the model and on the other side are the usual warnings in five languages. 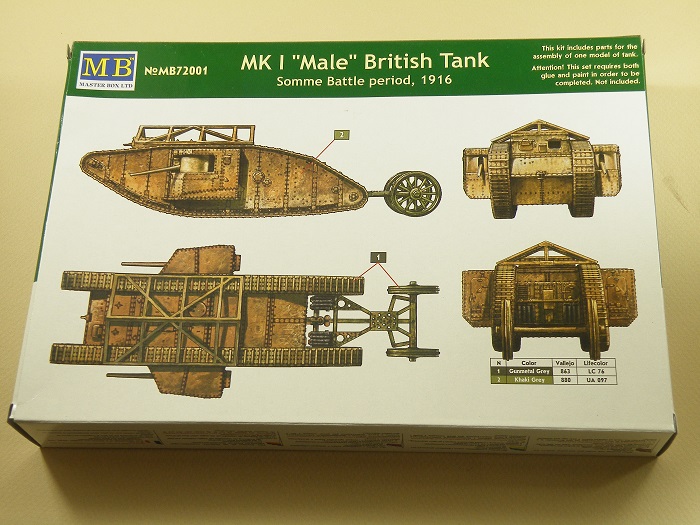 The instructions are eight pages and consist of the history of the tank in English, German and Russian on the first page.
Page two is the part picture and list all of the parts in the kit.
Page three, steps one to four, are the assembly of the hull and tail or steering gear springs.
Page four, steps five to eight, consist of assembling the tail wheel itself and the side sponsons.
Page five, steps nine to eleven, This is the final assembly of the sponsons to the hull, steering gear, cab and various detail parts.
Page six, steps twelve to seventeen, are the gun turret assemblies and their attachment to the sponsons.
Page seven is the screen frame assembly and the addition of the tracks.
Page eight are drawings of the completed model.
A supplemental instruction sheet is included that shows the placement of the anti grenade screen and details for the frame and steering gear.


The model comes on two trees molded in light Grey styrene containing 46 parts . I found a little flash on a few of the parts but nothing really big however I found the moldings to be well done overall. 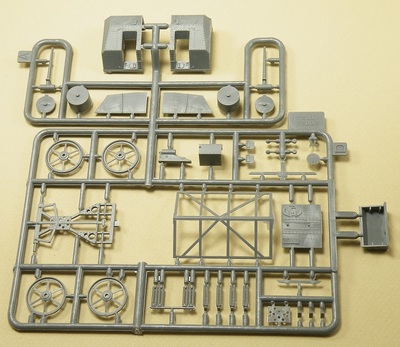 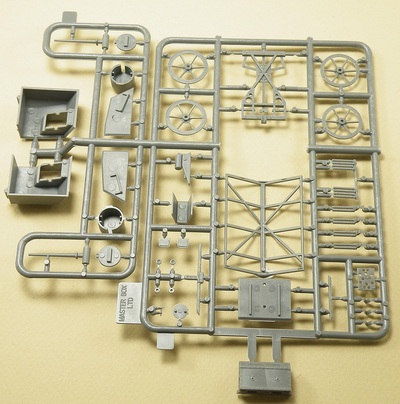 The tracks appear to be made of a material that can be glued to the model but I will not be certain of this until I construct the model.
Also included in the kit is a photo etch screen and additional detail parts which are attached to the plastic frame that makes up the anti grenade screen. This screen was used since the hull roof was vulnerable to grenades. It was not used after the Somme Offensive. 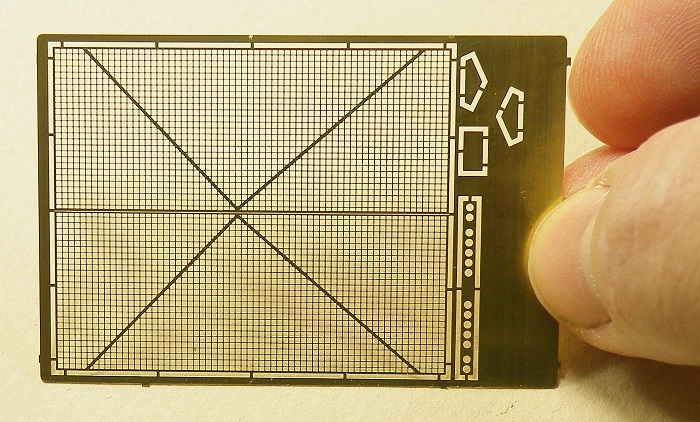 From my own research in building and correcting the Airfix kit the hull appears to be very accurate with the correct number of bolts and the early track tensioners. This can be distinguished from later marks by the rounded end while the later versions had a square end. The cab is well done and includes periscope openings on the cab roof, vision slits, hinges for the vision flaps and the correct number of pistol port covers. 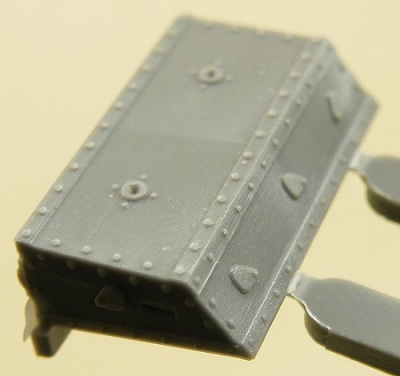 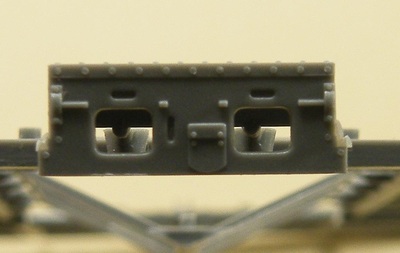 My only concern was the gun sponson shape and detailing but after looking at period photos on the Landships 2 site I feel this too is quite accurate. 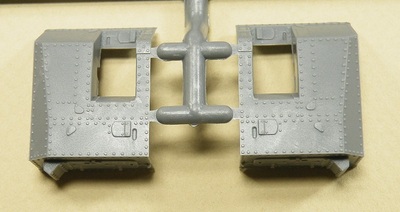 One issue I found, and this is really a small one, is that the turret gun aperture is a little tall and could be more rounded instead of square on the ends. This being said I will not bother to correct it as I have no problem with it but purists may want to change it. The gun sight elevation slit is missing but this is easily added.

The rest of the kit parts look to be quite accurate and the detail is well done and restrained. This model just begs to be dry brushed to bring out all of the detail that Master Box has molded onto the kit. 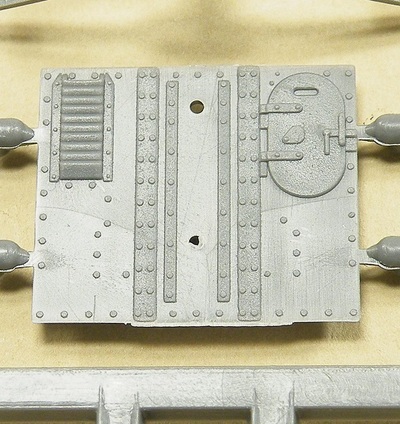 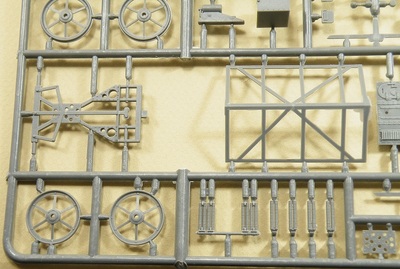 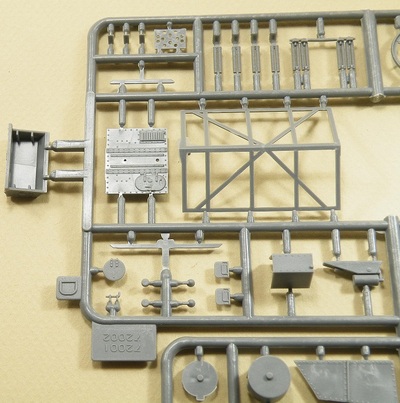 The tracks have accurate detailing on the face. I did notice a little flash in some areas of the track but nothing that cannot be remedied with a sharp knife.  No decals are included in the kit.

Yes! This is by far the best styrene model of a Mk.1 I have ever seen. But I am not too surprised about that. On the bottom of the front page in the tank history is a Thank you to Helen Lawson and the Landships web site as well as to Thomas Hartwig and Shawn Gehling. The contribution of these people has made this an excellent model and Master Box is to be commended for obtaining the advice of such knowledgeable people. If you have even a slight interest in W.W.1 tanks this is a must buy kit. I highly recommend it.
I personally will buy the Mk.1 Gaza tanks as well as the Mk 2 tanks. Master Box has done an incredible job in producing an accurate replica of the Mk. 1 Male tank. Now go out to your local hobby shop and buy one. You won't regret it.

Almost all of the knowledge I have on the Mk.1 is from the articles and forum on this web site. The forum is excellent with highly knowledgeable people who are ever ready to help you find the answer to your question about the First World War. Helen Lawson's plans can be found on the forum in the Reference discussion group. I highly recommend you join the forum.