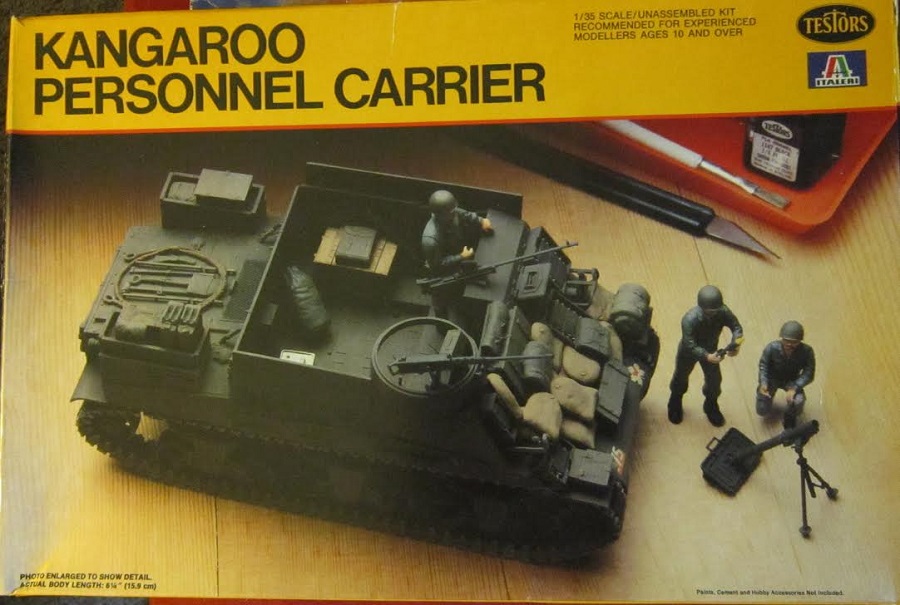 ​Kit no. 826
By Ray Mehlberger
OUT OF PRODUCTION:
​HISTORY:
The running gear and chassis of the highly successful M4 tank formed the basis for the M7 Priest self-propelled 105 mm Howitzer Motor Carriage dubbed the Priest by British troops. This gun carrier saw extensive action in Europe and Africa.

The Kangaroo, in turn, was a field modification of the Priest. As the Allies began to move forward in greater numbers, another need arose: armored personell carriers (APC’s) to carry troops. Other types of APC’s existed but there weren’t enough of them to meet the rapidly growing demand. It became clear that by removing the gun, gun mount, ammunition bins and by adding forward plating, the Priest could become an excellent APC.

​The work was done in the field by various workshops at Brigade level  More than 100 Priests were modified in this way. When converted, the vehicles were capable of transporting 20 men, their equipment and a two man crew. The Kangaroos were used primarily on the Italian Front.

Italeri is an older prolific model company based in Italy. Testors was their U.S. imported at one time.

This kit comes in a shrink-wrapped end-opening type box. I am no fan of this type of box, because invariably parts or the decal sheet would find their way past the end flaps of the box to become lost.

However, this kit has a slide-out tray inside with all the contents in it, which stops the loss from happening. Good move Italeri.

The box art is a color photo of the Kangaroo made up, along with its crew figures and posed on a modeler’s work table. The Kangaroo is in overall olive-drab with British unit marks on the front.  A white number 175 and a white flower logo re on the front.

The bottom of the box has 8 color walk-around photos of the model made up in the box art scheme. Credit is given to Dave Musikoff for the build. Kit features are listed as:

As an added bonus, extra parts are included for a variety of optional details. A thorough instruction manual provides professional tips on weathering and other finishing techniques. In addition, each Testors plastic model kit includes authentic decals by Micro Scale. Usually available only through specialty hobby stores. These exact scale decals have the well earned reputation for being the thinnest and most accurate in the industry.”

The copyright date is given as 1979 and Testor’s street address in Rockford, IL U.S.A. is provided. Parts are made in Italy and the box printed in U.S.A.
​WHAT’S IN THE BOX:

The box has a slide-out tray that holds 3 dark-green parts trees in a sealed cello bag, a loose decal sheet, the instructions and a small color catalog showing Testors finishing supplies and other kits.

Page 1 of the instructions has the history of the Kangaroo, followed by BEFORE STARTING, PREPERATION OF PARTS and painting instructions.

Page 2 has the parts trees illustrations. Trees are labeled with geometric symbols and not alphabetized like in most kits.

Page 3 through 9 give a grand total of 13 assembly steps.

Page 10 has the painting instructions for the crew figures.

Page 11 has decal application instructions and shows the carry-on equipment and a 4-view for the only scheme provided – the box art one. It is in mix of olive-drab and khaki brown. (marks already described above).

Page 12 has a long discussion on it of weathering hints.

The first dark-green tree is labeled as a square. It holds: the crew figure’s parts, machine guns, rifles, tools, mortar parts, jerry cans etc. (162 parts) 6 parts are X’d out on the parts trees illustrations as being excess and not needed to complete the model. 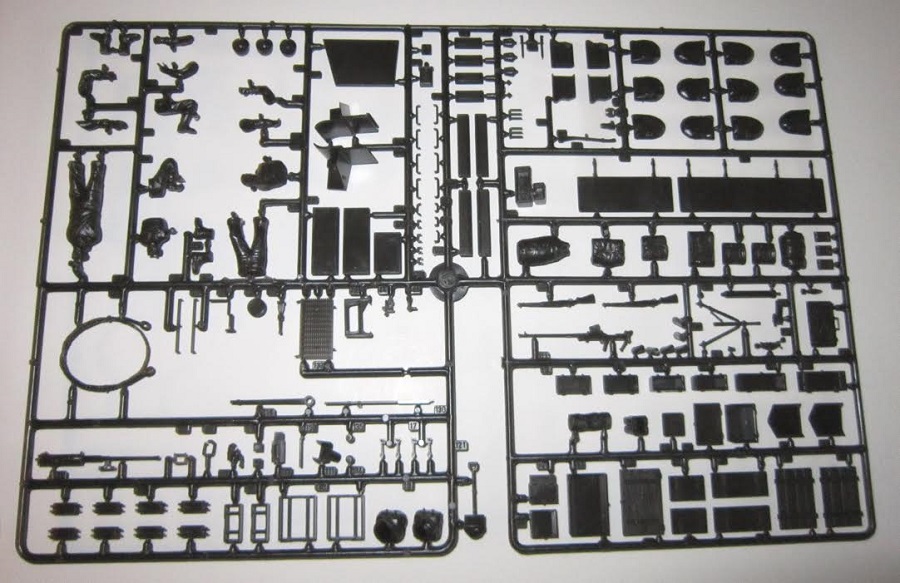 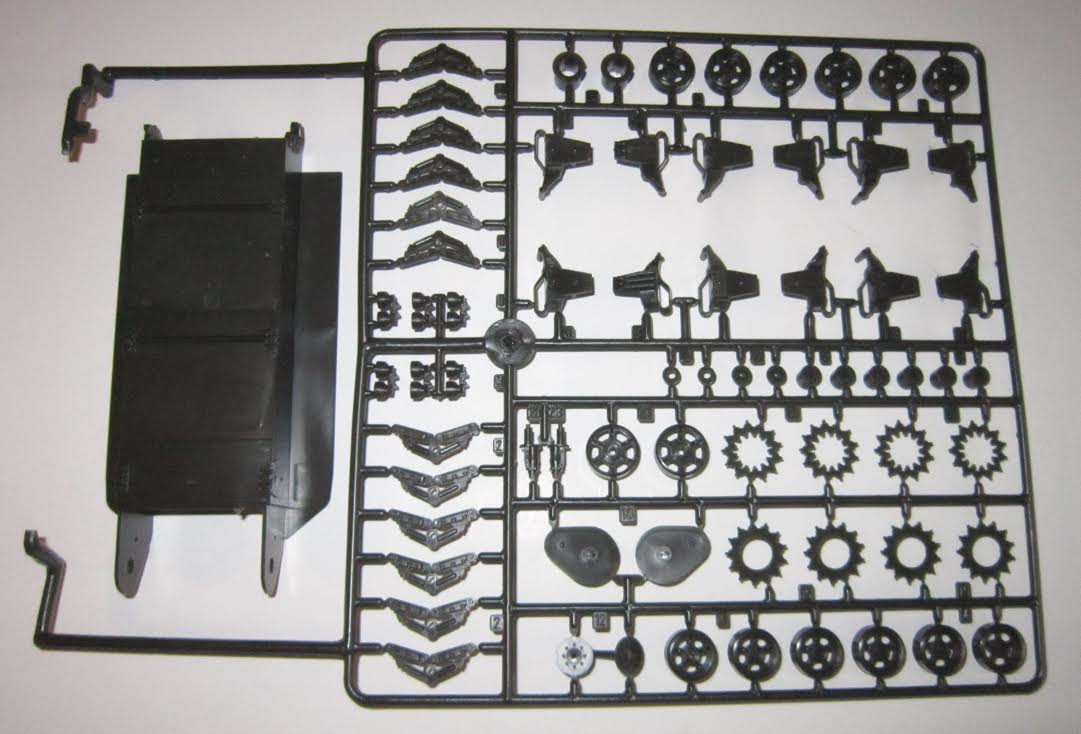 The third dark-green tree is labeled as a star. It holds: the fighting compartment walls and floor, control levers etc. (68 parts) 8 are marked as being excess. 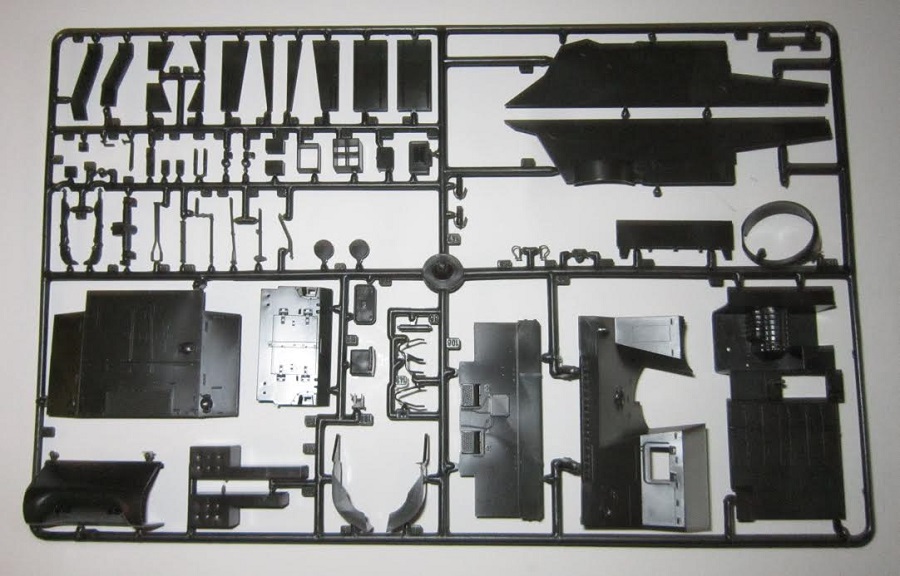 The vinyl rubber-band type treads are next. There are 2 long runs. These are the old type that has to be heat-riveted into loops, not the newer glueable ones.

The decal sheet completes the kits parts. It carries the one and only marking and the dash board instruments. 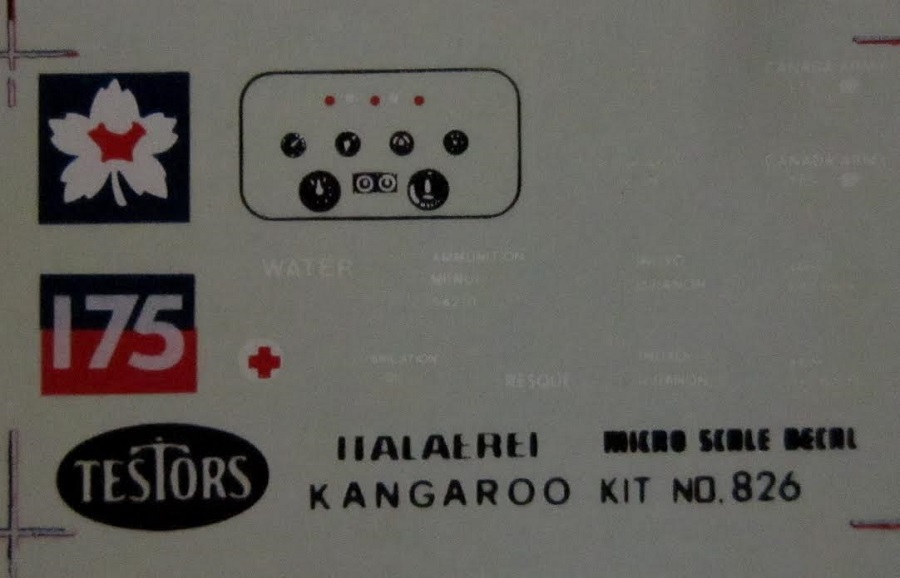 This is highly detailed kit. Not recommended to the novice modeler and not a weekend project.
I purchased my kit at my local hobby shop back in the late 70’s.