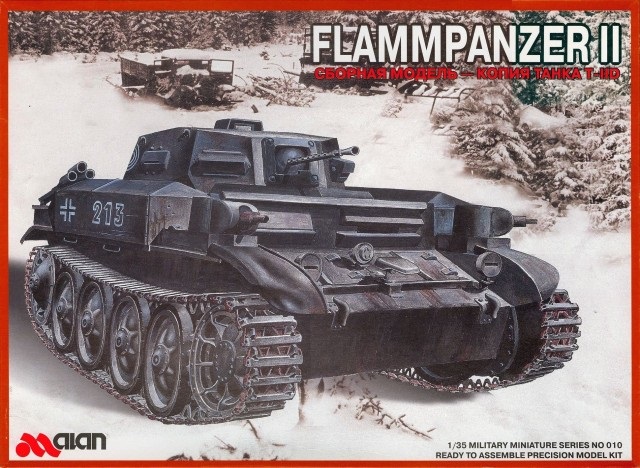 After the French defeat in 1940, the Wehrmacht's Pz.Kpw. II tanks were

considered to be obsolete due to insufficient firepower and thin armor,

and most of them were removed from front line service. At about this time,

numbers of the Ausf. D tanks were converted into flame-throwing tanks

and re-designated as the Flammpanzer II. This tank represented quite a

change from the original light tank.

Crewed by two men, flame-guns were mounted on the fenders, being able

to traverse through an arc of 180 degrees to each outboard side. Fuel for the

flame-guns consisted of thickened gasoline, which was expelled by

nitrogen under pressure. Most of the tank's internal space was taken up by

Enough fuel was carried for 80 short bursts. Because the nitrogen was at


fairly low pressure, the flame range was limited to 35 meters. Fuel was ignited

the fitting of grenade launchers to cover the advance on targets.

Although the Flammpanzer suffered from short flame-gun range and thin

armor, it was used in this capacity until the end of the war.

Alan was a model company based in St. Petersburg, Russia. They are

long out of business and their molds mostly went to ARK brand (also in Russia).

The box art shows a Flammpanzer II Ausf. D moving across a snow-covered

clearing in a woods. There is a knocked-out German truck in the distance

behind it. It is in overall dark Panzer gray with a white outline type hull no.

the back corners of the turret.

subject, followed by a one paragraph history of the tank in 5 languages,
including English.

that Alan marketed: Kit no. 003 of a Soviet ZIS-5 truck, kit no. 009 of a regular Panzer II Ausf. D and kit no. 011 of a Marder II D. The kit is said here to be not suitable for children under 36 months of age due to small parts. The box also states it was MADE IN RUSSIA.

main body of the tank.

The first of these trees contains the parts for the turret, front fenders, storage 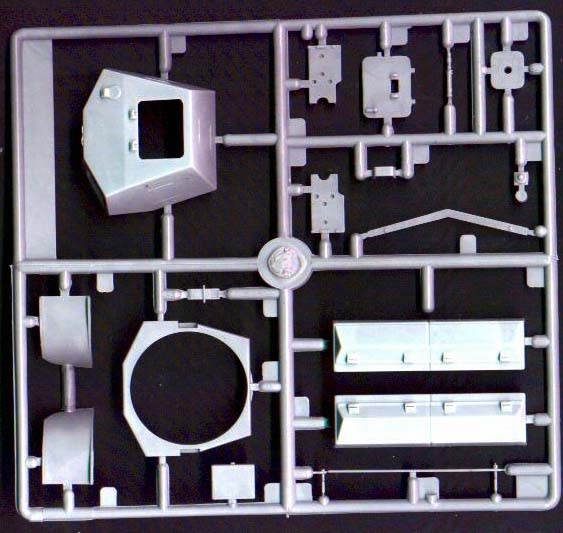 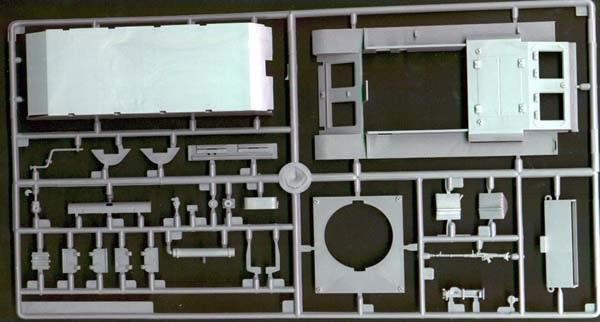 The third and fourth trees are identical and give us the road wheels, drive sprockets, flame-projectors, tools, grenade launchers etc. (52 parts on each tree). 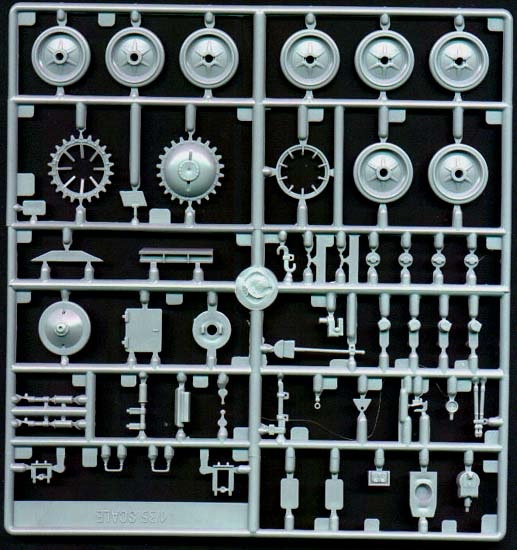 Another cello bag contains four identical trees of individual track links. There are 56 links on each tree. 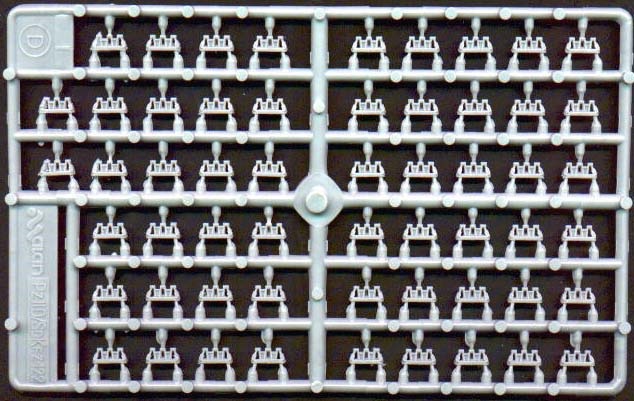 A tiny zip lock bag holds the decal sheet, a P.E. brass exhaust shield screen, and a small tree of lift hooks. There are 10 hooks on this tree.

No figures are in the kit, nor are there any clear parts.

Decal option is just for one tank marking, all in white. You get the white outline type German cross, and white turret numbers for a vehicle with the 100th Battalion, Russia, 1942.

Page 1 begins with a black and white repeat of the box art, followed by

MADE IN RUSSIA and the history of the tank in Russian, English,

Page 2 to the top of page 4 give a grand total of 7 assembly steps.

cross. There are two white circles on the back of the turret. Below this is

address in St. Petersburg when they still existed.

This is a neat model of a variant of the Pz.Kpfw. II Ausf. D that I don’t think

anybody else markets a kit of. Highly recommended.

I got my kit in trade with the owner of Alan models years ago.