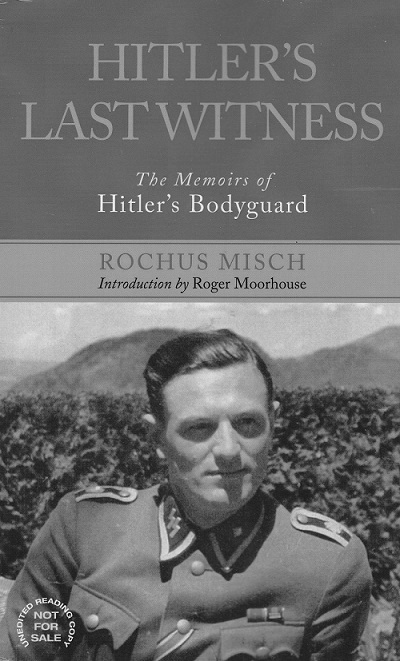 The memoirs of Hitler’s Bodyguard

MSRP: $32.95 in hard bound edition (my copy is soft bound and most likely cheaper)

After being seriously wounded in the 1939 Polish campaign, Rochus Misch was invited to join Hitler’s SS bodyguard. There he served until the war’s end and as Hitler’s bodyguard, courier and finally as Chief of Communicatins. On the Berghof terrace he watched Eva Braun organize parties; observed Heinrich Himmler and Albert Speer; and monitored telephone conversations from Berlin to the East Prussian FHQ on 20 July 1944 after the the attempt on Hitler’s life.

Towards the end, Misch was drawn into the Fuhrerbunker with the last of the “faithful”. As defeat approached, he remained in charge of the bunker switchboard as his duty required, even after Hitler committed suicide. Misch knew Hitler as the private man and his position was one of unconditional loyalty. His memoirs offer an intimate view of the life in close attendance to  Hitler and of the enfless hours deep inside the bunker; and provide new insights into military events such as Hitler’s initial feelings that the 6th Army should pull out of Stalingrad.

This is a convincing first-person testimony of the dictator’s final desperate months, days and hours. Misch’s memoirs are full of details, asides and digressions, Review of Hitler’s Last Witn which allow the reader a rare and fascinating insight into the Third Reich’s inner sanctum. Misch overheard conversations, watched the comings and goings and was a keen observer of events. He was as close to being a “fly on the wall” as one could get.

This book is soft-bound and 256 pages with 16 pages with 75 black and white wartime photos. Misch’s family is shown, Hitler and his highest henchmen and pictures both inside and outside the bunker at the end of the war.

This book will be of great interest to WWII historians. I doubt it will appeal much to plastic modelers per se. Otherwise I recommend it as fascinating reading.

I want to thank Casemate for this review copy.