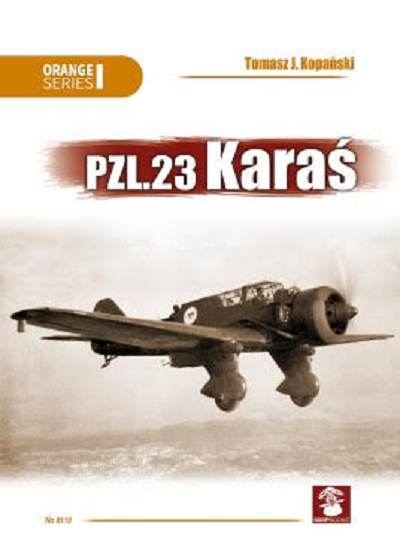 To meet this interest, during 1931, PZL decided to embark on the development of a new combat aircraft to meet this role. An earlier proposal for a fast single-engine passenger airliner, designated the PZL.13, was adopted as the basis of the new design.

The new aircraft, which was designated as the PZL.23, a relatively modern design, which integrated features such as an all-metal body and unconventional wing construction.

As the British Bristol Pegasus radial engine was licensed for use in Poland only, export aircraft were instead equipped with the Gnome-Rhône 14K engine. Powered as such and along with some airframe changes, the PZL.23 became the PZL.43 Karaś.

It was the primary Polish reconnaissance bomber in use during the invasion of Poland. On 2 September 1939, a single PZL.23B of the 21st Escadrille was responsible for the bombing of a factory in Ohlau, inside Germany; the attack represented the first bombing raid to be conducted against a target in territory within the Third Reich.

During the following days, the PZL.23 bomber escadrilles were deployed to attack several advancing German armoured columns; they often conducted these attacks at low altitudes, which made them vulnerable to anti-aircraft fire.

By the end of 1939, around 120 PZL.23s (86 per cent of the Polish Air Force's inventory of the type) were destroyed; however, of these, only 67 had been lost as a direct result of enemy actions.

Mushroom Model Publications (MMP) is based in the UK. They have all of their books printed in Poland by their associate Stratus in English. Stratus also publishers their own line of books in both English and Polish.

The cover art shows a PZL.23 Karas flying over the country side.

The back cover shows a Karas sitting on a grassy airfield with other aircraft. It has a white fuselage no. of 8 and has its propeller removed and a canvas wrap around the cowling.

The book contains 266 black and white wartime photos. 100 of these are technical walk-around type photos.

There are 32 1/72nd scale line drawings, 16 color walk-around type illustrations and 34 color profiles of Karas's, mostly in Polish AF markings, with one in Polish civil marks and ones in Romanian AF, Luftwaffe and Bulgarian AF markings.

This book will be of great interest to aircraft modelers and aviation historians alike.

There are the following kits:

All MMP titles can be viewed on Casemates web site at.
www.casematepublishers.com