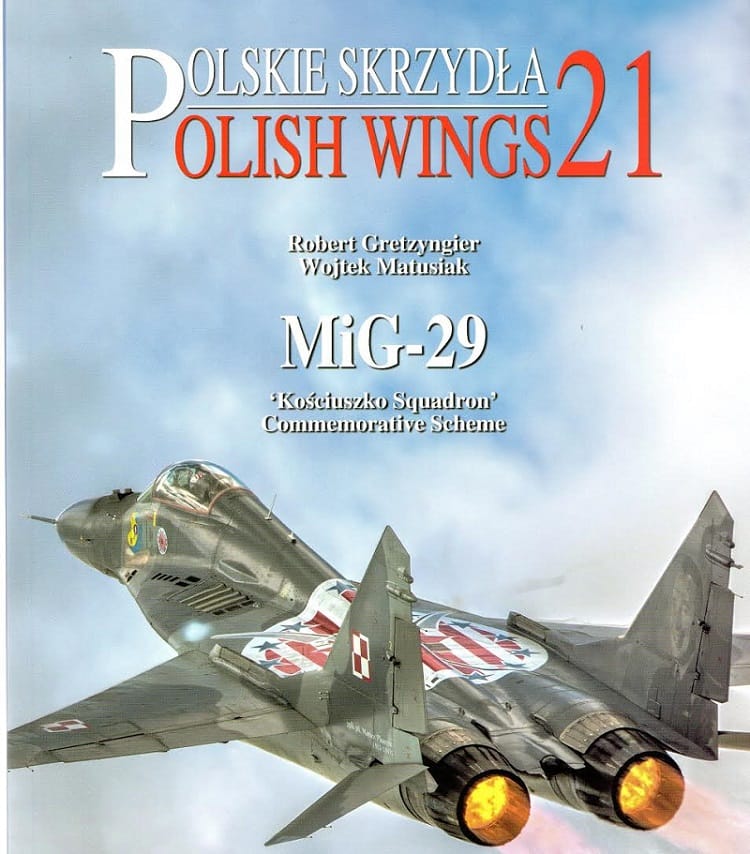 MSRP: $29.00 copyright date 2016
​In 2009, to celebrate 90 years of the original Kosciuszko Squadron and the forthcoming 70th anniversary of No. 301 Squadron's participation in the Battle of Britain, the back of a Mig-29UB two-seat combat trainer from the unit was adorned with a huge Kasciuszko badge.

The idea originated from Polish aviation historian Wojtek Matusiak in a conversation with Lt. Col. Robert Cierniak, at the time the unit commander at Minsk Mazowiecki, who supported it enthusiastically. The emblem was designed (based on the original 1919 badge) by Robert Gretzyngier, a renowned aviation historian and artist, and it was applied on the machine by a group of enthusiasts headed by him on 5 June 2009.

The following day the aeroplane was the sensation of the annual Goraszka air show near Warsaw. Subsequently it participated in numerous air shows all over Europe.

In 2012, a new commemorative project was initiated by Robert Gretzyngier and Wojtek Matusiak in cooperation with the 23 BLT, now commanded by Col. Maciej Trelka who supported it from the onset. Col. Cierniak, now with the Polish AF HQ, offered to help again. A second painting scheme was designed for the unit's Mig-29's. All aircraft would be given low-vis "Kosciuszko badges" on their upper surfaces, and each would be named after an outstanding Kosciuszko Squadron pilot from the 20th century wars, and adorned with his portrait on the insides of the two tail fins.

The project became known as Kosynierzy Warszawscy (Warsaw Scythemen), reviving the old nickname. A formal application was filed by the Polish Air Force History Foundation and approved by the HQ Polish Air Force. Gen. Lech Majewski, commanding the Polish AF at the time, showed personal interest in the project and supported it.

The entire scheme was to be applied with grey paint so as not to compromise the camouflage effect of the overall finish. Again, the design work was done by Robert Gretzyngier, who turned the general idea into detailed drawings of the portraits, based on well-known black and white photos, but reduced to just three tones of grey. He created the protraits of all Polish pilots commemorated in the project

In 2015, a new camouflage scheme was introduced on Polish M-29's, using paler hues of grey. When this scheme was applied during overhauls of aircraft used by the 23 BLT,  the portraits and names were reapplied on their fins as the Kosciuszko badge on their top surfaces.

Stratus is a book publisher based in Sandomierz, Poland. They are associated with Mushroom Model Publications based in the UK and print all the books for both companies. Stratus does the books in both English and Polish.

The cover shows a Mig-29 from above with the Kosciuszko badge done huge on its back. The back cover shows a more direct above shot of the aircraft.

The book holds 42 black and white photos. Most of these are portraits of pilots.

There are 96 color photos and 178 color illustrations or photos of roundels, insignias and stencil marks on Mig-29's.

There is a loose sheet in the book that is twice the page size. It is printed on both sides and is a guide that shows where to apply marking and stencils that are on a decal sheet that is supposed to be included in the book. However, there is no decal with my book.

I want to thank the folks at  Stratus and Casemate for this sample.
​A list of all the Mushroom Model Publications/Stratus books can be seen on Casemate Publications web site.